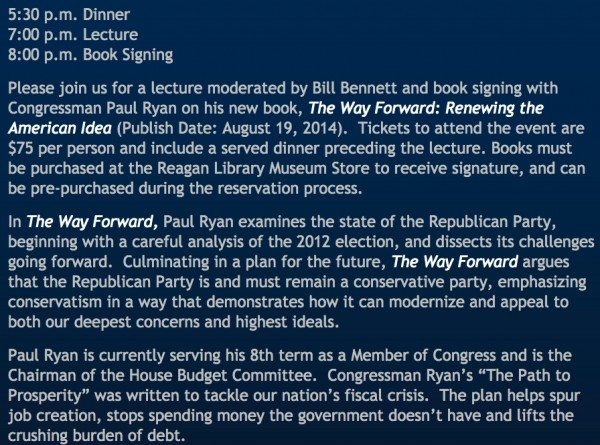 A group of veterans from the American GI Forum of California and immigrant rights activists (sponsored by SEIU, CHIRLA and Mi familia vota) attended the event together. Members of the group also bought Ryan’s book to have him sign it. While the veterans gave Ryan a letter about why Ryan voted to defund Deferred Action for Childhood Arrivals (DACA) earlier this month, one DREAMer who was part of the same group, Yamilex Rustrian, got this reception from Ryan as she was about to pose for a picture with the Wisconsin Republican:

Ryan (backing way from Rustrian): Oh, wait, I’m not doing DACA student protesting today, I apologize, here you go. They’re going to have to take you.

Female voice: So we’re going to go right up this way…

Rustrian (walking away): Thank you so much.

Other voice: We’re going to ask you to exit right this…

Rustrian is 18 years old and the founder of Kids Over Politics, an organization calling attention to the rise of unaccompanied minors from Central American to the United States. She attends California State University Northridge, and left Guatemala 11 years ago when her father was murdered. This is her story.

According to those who were with Rustrian last night in Simi Valley, Rustrian wanted to ask Ryan a few questions: 1) to explain his stance to fast-track the the deportation of Central American migrants and 2) to explain why he voted to defund DACA, given that Ryan is a potential presidential candidate in 2016. Just days before his exchange with Rustrian, Ryan was confronted by another DREAmer at a book signing in Florida. Last week in Chicago, immigrant activists protested a Ryan book talk.

Once Rustrian was escorted out (along with others in her group, except for the veterans), the person who filmed the exchange between her and Ryan, Unai Montes-Ireste of SEIU, was physically removed, according to an account he shared via phone. Montes-Ireste published the following video on his Facebook page last night, which happened just minutes after Rustrian was removed from the book signing line.

On his Facebook page, Montes-Ireste said the following: “Agent Zimmer said he was the head of Security for the Library and Officer Muller said he was head of the police detail. I was physically restricted and removed by armed officers who threatened me with arrest for trespassing event though I was wearing an event badge entitling me to access to the dinner, lecture and book signing.” Montes-Ireste also said via phone that security actively sought others in Rustrian’s group and removed them from the event as well, even though the members of the group were not standing together.

Messages to several numbers at the Reagan Library were left this afternoon.

In an email received this afternoon, Rustrian shared the following about her exchange with Ryan:

How did you get into the event?
Rustrian: Yesterday my friend Unai from SEIU and I drove for about an hour or so to Simi Valley to attend the event Mr. Paul Ryan was having in the Ronald Reagan library. We arrived at 5:00 PM and we had to wait in two lines after his speech to get our books signed. I waited patiently while Mr.Paul Ryan did his speech. I didn’t shout or insult him while he spoke.

What did you do to get on the book line?
Rustrian: I went through an hour wait to get my book signed. There were multiple lines but I though the wait would be worth it because I needed an answer to my question.

What happened exactly in the video and what happened after?
Rustrian: I introduced myself to Mr. Paul Ryan, I said my name and said I was a DACA student and need to ask him a question. In the video you can hear him say “I’m not doing DACA protesting today.” I never disrespected him or shouted and he decided to throw me out and not even give me the chance to ask him my question. My friend Unai who drove me to the event was physically removed with armed officers wearing bulletproof vests, though Unai was waiting in line.

What did you think of Rep. Ryan’s reaction?
Rustrian: How can someone who wants to be president not take the time to answer a question from an 18-year-old college student studying political science? He obviously doesn’t believe in a path to citizenship even for college graduate DREAMers. He obviously doesn’t want our votes or our families’ votes when he runs for President. He needs to rethink his position because America was built by immigrants, like his ancestors. He needs to see that we all just want better futures like the ones his ancestors worked for. We want to be here freely and no longer live in the shadows. The time is now for an immigration reform.

Calls and messages to Ryan’s Washington and Janesville, WI, offices made today requesting comment about last night’s exchange between Ryan and Rustrian have yet to be returned.