The Oscars and Racial Bantering in Public (Very Public) Spaces

I didn’t watch the Oscars last night (untouched by the agony of one of longest events known to humankind), but I still woke up to the Sean Penn “green card” controversy.

By now, you know what happened.

Ha! Funny! Isn’t it? Many didn’t think so, and social media soon exploded.

Was Penn racist? I don’t think so. Insensitive? You bet. Poor taste? Definitely.

This is how I see it. Penn forgot where he was and since he is very good friends with Alejandro González Iñárritu, he went for a joke he has probably used before to taunt his friend in private settings.

González Iñárritu did admit that he and Penn bust each other all the time since they became friends years ago: “Sean and I had that kind of brutal relationship where only true friendship can survive. When I was directing him in ’21 Grams,’ he was always making jokes…I made a lot of very tough jokes (to him) that I will not tell you.””

Hey, as one of my best friends (and my senior Mexican correspondent) put it, “”I bet Iñárritu really shredded this guy when they worked together…No one insults like chilangos…” So we get it.

Penn’s quip, however, has created all this outrage because he made it, not in the intimacy of a private setting to friends who may shot back in similar fashion, but during one of the most watched television events in the U.S.

I’ve had that experience. I’ve made friends with people from dozens of ethnic, cultural and religious backgrounds. Many of the friends I’ve made are White—broadly defined to include Italians, Irish, Poles, etc. Many of them came from working class backgrounds and had little exposure to Latinos. Yes, they would ask dumb questions about my ethnicity and culture and, surprise, surprise… I would ask dumb questions about theirs sometimes to make a point, sometimes because I really didn’t know about their culture. Many of my comrades in academia have had a million arguments with me about this but the point is that we also have some distorted views about others —and that we can take those moments— when the dumb question arises, to educate, to learn and more importantly, to connect.

Those friends who asked the dumb questions would also taunt me with racial jokes, and guess what? I would taunt them back with jokes based on their ethnicity. I became close with many of the people with whom I had this racial bantering. They would invite me to their houses and families, and I would do the same. I would teach them some Latino music and steps and fake an injury when they tried to teach me theirs.

But seriously, I can say that many were genuinely interested in learning from my culture. They still remain friends to this day.

Penn apparently has that kind of relationship with González Iñárritu. But the setting was all wrong. It wasn’t a private party, it was a public event—one that a good part of the U.S. and world was watching.

So this is the problem: by going for that joke in that very public space, Penn showed to be incredibly insensitive to the plight of millions of both undocumented and documented immigrants, and Latinos in this country whom are not just the butt of this joke often but who also suffer real structural discrimination and persecution coming from the belief that we don’t belong here. 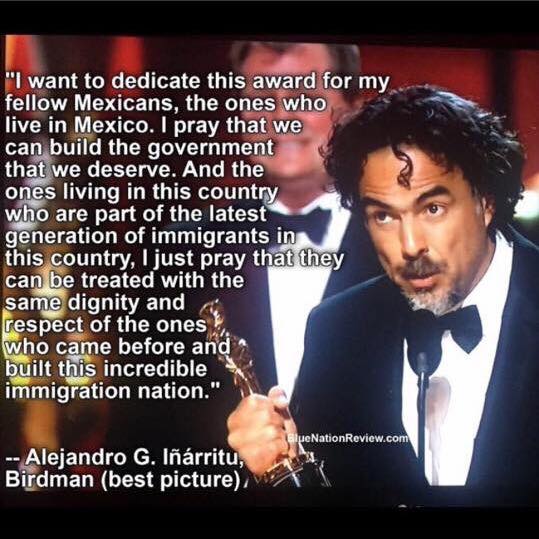 Penn played into the crowd that sees a Brown person and immediately labels them as “not-belonging.” And that is the main issue here: Penn made a joke about his friend’s nationality at the worse possible moment. It actually cheapened his announcement and González Iñárritu probably didn’t like one bit. I can only imagine González Iñárritu going up the steps shaking his head and thinking, “Pinche güero pendejo! Damn funny, but seriously, mamón, here and now? ¡No mames!”

Harry Franqui-Rivera is a historian, a blogger and a researcher at the Center for Puerto Rican Studies, Hunter College, CUNY. He has a forthcoming book, “Fighting for the Nation” on the Puerto Rican experience in the Spanish and U.S. military. He has recently published in online magazines on the topic of Puerto Ricans in the Korean War and the Diaspora. You can follow him @hfranqui.