In perhaps one of the most boring Oscars ever (excluding one incredible acceptance speech by Common and John Legend), the last five minutes of the broadcast got everyone worked up. It happened when actor Sean Penn muttered the following right before letting the world know that Alejandro González Iñárritu’s Birdman won Best Picture:

As expected, the reaction to Penn’s inside joke with his friend (González Iñárritu said it was “hilarious” after the show) was swift, yet it in our world, many Latinos were defending Penn’s joke.

@latinorebels omg they are friends. It was a joke.

@latinorebels They’re friends. He was joking with his buddy.

@latinorebels @YummyANA that was a joke. No need to get all flabbergasted by it

@latinorebels @JuanG_Arango let’s not be those people. they are friends, it was a joke. good to have humor!

Which misses the point, in our opinion. How do we explain why Penn is now a #Penndejo (h/t @laloalcaraz)?

Maybe these tweets shed some more light on the real issue here:

They’re called “inside jokes” for a reason. You’re supposed to keep ’em inside. #HelpfulAdviceFromAComedian

Considering how often it happens, any POC that wins an award has to brace themselves for negotiating a white person’s idea of a joke.

Listen up: Iñárritu’s reaction is irrelevant. I’m happy he’s not offended. Doesn’t change that the rest of us have to deal with racist bs.

The larger the audience, the easier the subtle shades of various points can be misunderstood. @latinorebels @Elvadenise04 @JuanG_Arango

Sean Penn’s inside joke MIGHT’VE been funny to Alejandro Innaritu. Others watching the #Oscars2015 weren’t in on it. Cc: @latinorebels

But hey, it’s just a joke, right? And wouldn’t real friends feel proud of what their friends accomplished? Sadly, Sean Penndejo grabbed the spotlight from his Mexican buddy, but at least the 2015 Best Director ended the night with some class. Here’s hoping his message gets more attention. We offer this suggestion: if Penn were to publicly address his idiot humor, it would be smart to remind the world about what his friend said last night: 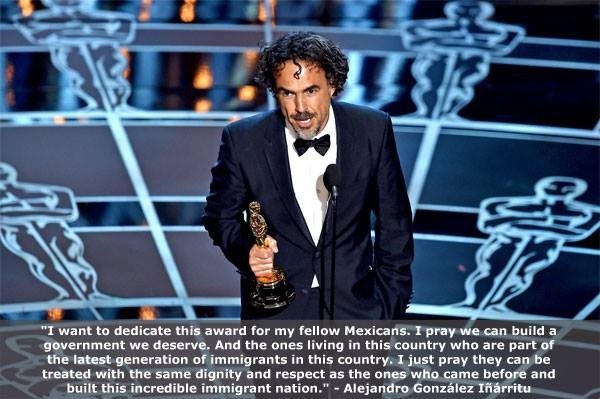 Chalk up #Penndejo as just yet another example of what our founder wrote about yesterday before the show. Hollywood as industry has a lot of work to do, and the community will be vigilant.

As for Sean Penndejo? He needs better joke writers.

And as for Alejandro? Now that you have an Oscar on your shelf, try using some of that power to tell more of the stories your message called for last night. Don’t be a #Penndejo, either.

7 responses to “Don’t Be a #Penndejo”