The Cuban Embargo Is Working: #ConanCUBA Showed It

So, Conan went to Cuba. 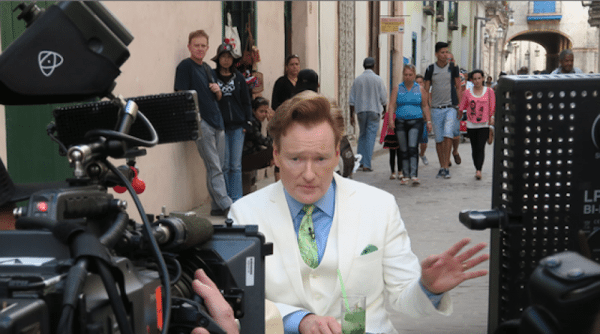 Seems fitting considering that, once upon a time, Conan was my generation’s Johnny Carson. And if you’ve seen any of the surveys published in the past five years, you’ll know Millennials are the most open to opening relations between the United States and its closest, non-bordering neighbor. After all, we’re too young to remember the scary days of the Cold War. Socialism isn’t so menacing to us as it is the older crowd. In fact, being young, progressive and dreamers, we’re kind of keen about it.

For most viewers, Conan’s trip provided them with their first glimpse at the Communist country frozen in time. Most people already know about the “yank tanks” that pack avenues from Havana to Santiago, one result of the U.S. embargo imposed shortly after revolutionaries deposed a U.S.-backed dictator and began nationalizing industries that had been controlled by U.S. monopolies for half a century. Many Americans are familiar with the music, the dancing and maybe even the Malecón.

What startles most, however, is the patina of scarcity on every façade of every building, seeping into every room and hallway. These are the ruins of economic ruin.

The average person will see such scenes as proof that Cuba’s Communist experiment has been a perfect failure. But that’s not even half the story.

For some time now it’s been popular to argue that the U.S. embargo has failed. This also isn’t true. On the contrary, the embargo has largely been a success.

Cuba’s economy is crippled, especially since the collapse of the Soviet Union. Cuba’s government has been hindered from carrying out its domestic agenda, instead having to spend much of its time and energy addressing scarcity and preventing a U.S.-orchestrated coup.

You can go to the State Department website at this very moment and read memos from the early days of the embargo, describing how Washington intends to starve the people of Cuba into submission. One memo explains how regional support for Cuba makes “the potential for accomplishing significant and effective, new, overt political and economic measures against Cuba … limited.” It goes on to advise that the United States “might covertly engage in economic warfare with good effect” [emphasis mine].

“The sanctions are really incredible,” Prof. Noam Chomsky explained on Democracy Now earlier in the week. “So, if, say, Sweden was sending medical equipment somewhere which had Cuban nickel in it, that had to be banned.”

Enough evidence suggests the United States hardly limited its covert warfare to the economic arena. From the painted B-26 bombers of Playa Girón and the exploding cigars of Operation Mongoose, to USAID’s recent creation of a fake Twitter and its infiltration of Cuba’s hip-hop scene—the war being waged against Cuba since 1959 is, if not the longest, then arguably the first and only to be fought entirely in the shadows.

Not so much as a drone strike.

Of course, there’s the pesky fact that the United States operates a military base and torture prison at Guantanamo Bay, which means America does have boots on the ground in Cuba.

Hence, it must be said: the United States has waged war against Cuba economically, politically and militarily for the past 55 years. Cuba is in a unique position. There was the Soviet Union of course, but we all know how that ended. Plus Cuba is much smaller. There’s North Korea, but Cuba is much closer.

To last as long as it has under so constant and so great a threat says something about the resolve of the Cuban government and the Cuban people. The crumbling buildings of Havana are the embodiment of that resolve. They’re the cuts and bruises of a boxer unwilling to lay on the canvas.

They’re the havoc and destruction the United States inflicts on a Latin American nation unwilling to submit.

One response to “The Cuban Embargo Is Working: #ConanCUBA Showed It”