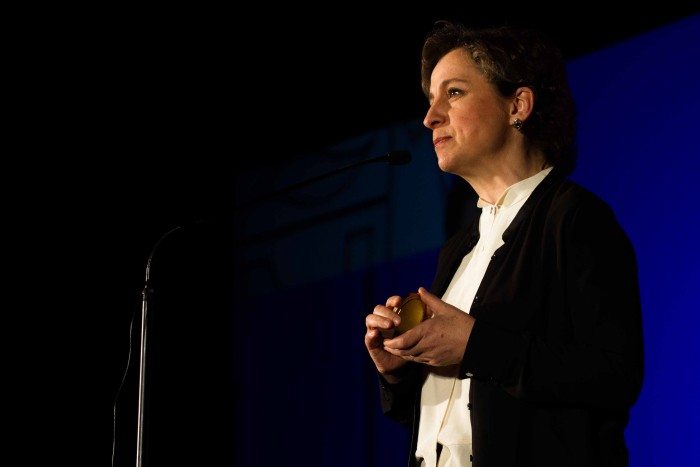 For decades, one of the top investigative journalists in Mexico, Carmen Aristegui, has unapologetically and tirelessly worked to inform the people of her country.

In Orlando, she was recently recognized for her laborious work with the Presidential Award of Valor by the National Association of Hispanic Journalists. Here, we had the opportunity to ask her about the state of journalism in Mexico and learn more about her projects.

From the start of her career, Aristegui has led a rocky relationship with public figures in the government and even other media outlets. She was fired from Mexican radio station MVS for the first time in 2011, after asking on air whether former Mexican President Felipe Calderón had a drinking problem.

But the story that shook Mexico was published in November of last year, when Aristegui and her team reported that Mexican President Enrique Peña Nieto and his wife, actress Angélica Rivera, owned a mansion valued at about $7 million. It was sold to them by a huge company that had plenty more where that came from — hundreds of millions of dollars in government contracts.

Forget #Calcetagate, the debate over whether Peña Nieto knows how to properly wear a pair of socks. Her team’s discovery was serious trouble for the president of Mexico. Not only did it put him in the international limelight, but the report also begged questioning on his commitment to transparency and his evident conflict of interest.

Soon after the report ran, Aristegui was fired from MVS once more.

“Let no one doubt, this is a battle for freedom,” she told the Los Angeles Times.

The reason the radio station said it dismissed her coworkers as well was that reporters on her team had identified themselves as Mexicoleaks, a website Aristegui founded to help community members anonymously send tips. MVS argued that this representation had falsely implied that the station supported the site. When Aristegui pressed for the reinstatement of the journalists, MVS rejected her ultimatum.

Aristegui had little doubt that Peña Nieto’s office had a part in her dismissal, adding in an interview with Reuters: “It looks that way because I can’t imagine something of this magnitude without at least some kind of consent from the highest presidential power.”

In our interview with Aristegui, we asked about her progress on Mexicoleaks. She also stood behind Mexican-American reporter and Univisión anchor Jorge Ramos and his charged interview questions. Ramos was criticized by viewers and some journalists in the United States earlier this summer for his confrontational encounter with GOP candidate Donald Trump at a press conference.

“Bring on the critics,” Aristegui added, having said earlier, “Journalists are not here to make others comfortable.” 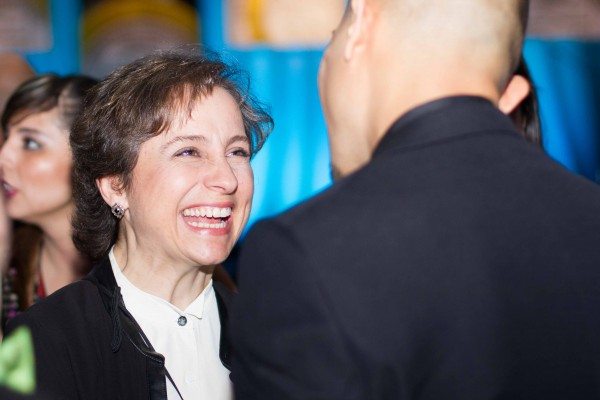 Why are you a journalist in Mexico?

I am a journalist because I believe it is in important activity needed for the function of a country. All characteristics involving journalism are ones I am passionate about. I like to know what’s going on in the world, and I like to do well by my country and to report on what society cares about. Being a journalist means communicating what the people have the right to know.

What is your opinion on the way people like Jorge Ramos report? Do you consider him a journalist?

Yes. I do think that Jorge Ramos is a good journalist. I admire him. He is a Mexican who has been working from the United States for very many years and has become an influential public figure. He is controversial and some think that he is too aggressive, but I think he is a valuable journalist and appreciate his coverage on Mexico. Recently, he has made some sharp and candid commentary on Mexico.

His interviews are always tough and he puts his interviewees in perhaps uncomfortable situations, but journalists are not here to make others comfortable. Journalists exist to find individuals that have something to say that many times, they would rather keep to themselves. I think Jorge has particular reporting style that enables him to deliver strong and controversial interviews. But at the end of the day, his interviews have a purpose – to reveal something or to dispel information for his viewers.

You too have been criticized for your reporting style. You were called out for the questions you asked about Felipe Calderón regarding his drinking problems. What is your response to the criticism?

Bring on the critics. Criticism does not worry me because when all is said and done, it is an important element of anyone’s career. No one likes criticism because we all think we are already doing things the right way, but at the end of the day, we have to understand that as journalists we are similar to politicians in the sense that we are subject to other people’s opinions. Your work will always be observed and scrutinized by the general public and other reporters. They might like the work you do or they might hate it. The important thing for you to do is to report honestly and professionally. I don’t think that any one opinion is 100 percent authoritative. I don’t worry about the critics; I worry about not tending to the valuable parts of the criticism.

What do you hope to accomplish with Mexicoleaks?

We are about to re-launch Mexicoleaks because when we first announced it, we were kicked off air. We have not been able to start fully working on very many projects. We are going to rework our plans to go live on digital. In the past several weeks, we have been doing some important work but we need to rethink our plans so we can move forth with more power. Unfortunately, we couldn’t carry this project out on the radio.

Are you still connected with the other journalists on your team that were kicked off MVS?

Yes, we communicate and we are all working on the Mexicoleaks project. We have received some good information, but need some final details to prepare the platform to re-launch Mexicoleaks and invite others to send us tips which could turn into investigations.

On that note, how would you define Mexicoleaks?

Mexicoleaks is a platform featuring encrypted information. With this platform, we invite the Mexican society to submit tips if they know of something relevant, have a document to share or other important information. If these individuals are scared of coming forth with this information as themselves, they can send tips to our journalists through our platform which receives encrypted messages. The person submitting information will know that their identity is completely protected, and not even the journalists on our end will know who submitted it. Journalists will receive information through Mexicoleaks and no one will ever know who delivered the tip. This is a way to invite people who are scared of dispelling sensitive information to collaborate with journalists.

Lyanne Alfaro is a multiplatform reporter who has covered entertainment, race relations and technology. She works on social media at Business Insider and obtained a degree in journalism and minor in environmental science from the University of Illinois at Urbana-Champaign. Her dad named her after Lyanne Melendez, news reporter at ABC 7. While his choice did not influence Alfaro’s decision to pursue journalism as a career, she appreciates the fortuity. You can follower her @LyanneAlfaro.