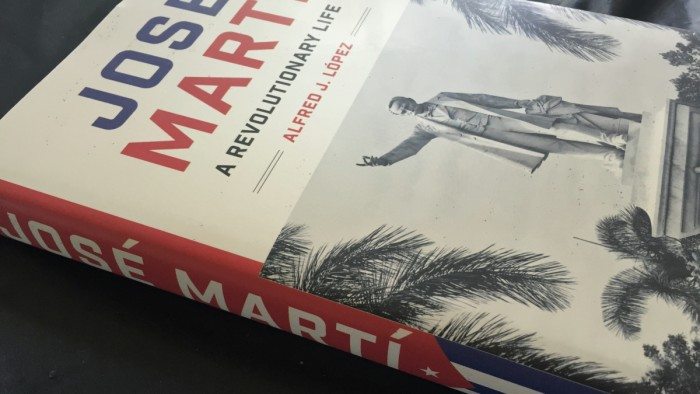 This book review was originally published by Gozamos.

In his 1897 travelogue Following the Equator, Mark Twain defined a classic text as one “which people praise and don’t read.” The same can certainly be said of a lot of people. (A certain Nazarene comes to mind.) But with his name and words sprinkled in the speeches of presidents, dictators and popes for at least the last half century, few historical figures are both more celebrated and less understood as the Latin American littérateur and Cuban revolutionary José Martí. Thus why, in terms of anticipation, a new biography of Martí — and in English, the language of the newer generations of Latinos — is the equivalent to a new J. K. Rowling release. Alfred J. López’s José Martí: A Revolutionary Life is just such a book, and it doesn’t disappoint.

The text unveils Martí’s life chronologically, beginning with his birth on a unusually cold Havana morning in January 1853 to his untimely (and some would say foolish) death near the banks of the Contramaestre River in eastern Cuba less than 42 years later. During that span, however brief, Martí lived the lives of 10 men, settling in half a dozen disparate lands and taking on as many different roles. He was a political prisoner in his home town, a law student in Madrid, a playwright in Mexico City, a teacher in Guatemala City, a poet in Caracas and a revolutionary organizer in New York City, all while publishing a constant stream of journalistic pieces and political essays in the pages of newspapers from the Big Apple to Buenos Aires on issues ranging from boxing and flood victims to French literature and U.S. imperialism.

López recounts the events of Martí’s life with as much attention to drama and narrative as you might expect from a professor of English and comparative literature, though he doesn’t neglect his duty as a biographer to lay out the knowable facts of his subject’s life and times, citing newspapers, government documents, correspondence, other histories and biographies, in addition to Marti’s own writings — an incredibly extensive record in and of itself. Also included are photos, perhaps the most notable being that of a zealous 17-year-old prisoner with a shaved head and a thick chain hanging from his waist.

I’m not Cuban, but as a Puerto Rican, Martí’s name has floated above the milieu of my life just as it does the lives of most antillanos. Martí is arguably the political and cultural father of the modern Antillean world in the same way that Bolívar’s goals and Neruda’s verses have come to permeate everything that is Latin American. His name is one of those which rise to the level of an ideal. For Latinos, saying the name Martí evokes a specific set of principles — a raison d’être — synonymous with the words independence, anti-imperialism, anti-colonialism and literature. No self-respecting Latin Americanist hasn’t at least read the 1891 manifestos “Nuestra América” and Versos sencillos. Still, I’m ashamed to say I hadn’t realized how little I knew about Martí’s life until I began reading López’s captivating biography.

An 1894 photo of the Cuban writer and revolutionary José Martí

López mostly resists the urge to use a presentation of Martí life and work to pass judgment on today’s Communist regime, something which must have proved doubly hard for the son of Cuban parents raised in Miami’s anti-Castro climate. He cites the time he’s spent away from South Florida, as a professor at Purdue University in Indiana, for allowing him to objectively study a person whose “words and image” have become “a key ideological weapon in the battle over [Cuba’s] future,” stating that “it is precisely my unfamiliarity with the ways I was supposed to have read and interpreted Martí that has enabled me to write this book.” Generally speaking, López succeeds in steering clear of present-day polemics, caving only twice: first when he compares “today’s warlords and petty tyrants” to the caudillos Bolívar faced in the early 1800s, and then when he excerpts a October 1884 letter to Máximo Gómez, the militaristic generalísimo of the Cuban revolutionaries, in which Martí makes clear his “determination to not contribute one iota, out of blind love for an idea into which I am expending my life, to bring to my land a regime of personal despotism, which would be more shameful and disastrous than the political despotism that it now endures” (emphasis mine).

To his credit, however, López’s biography was published in early November 2014, which means he had conducted the research and banged out his manuscript long before the rapprochement was announced by Presidents Barack Obama and Raúl Castro on December 17. Still, no biography of Martí produced since the revolution has not also been a statement about Cuban politics. Even a simple appeal to remember Martí carries with it a whisper of political commentary. And while the late Christopher Hitchens firmly believed that no one can know what a historical figure would’ve thought about events occurring more than a decade after the person’s death, Martí’s clear positions on Cuban independence and U.S. imperialism allow us to be relatively certain of one thing — that while Martí likely would’ve supported the 26th of July Movement (whose goals and methods were genuinely Martian, at least initially), he would’ve objected to the “regime of personal despotism” that arose around the rebels’ triumphant comandante en jefe.

López’s book lifts the fog of myth which obscures Martí’s life and, as with any good biography, reveals a figure both more and less heroic than his legend. The man who emerges from the mist is one with as many laudable traits as he has faults. He is a man of limitless energy who is almost constantly sick and in pain, a man of towering principles who spends the last years of his life estranged from his wife Carmen and his son Pepito, a man who shacks up with a widow (also named Carmen) and her daughter Maria (the mother of actor Cesar Romero, who also may have been Martí’s biological daughter). Writer, poet and intellectual extraordinaire, Martí would die the death of an average soldier (though technically a major general) on a battlefield he really had no business being anywhere near — an ignoble yet strangely fitting end to the life of a man imbued with so many radical contradictions.

It’s tempting to describe Martí as the classic Latin American archetype — the poet turned freedom fighter turned martyr for the cause — and to label López’s text the proverbial “instant classic.” But to do that would commit a severe injustice to Martí’s works and this latest biography, which deserve to be read by everyone.