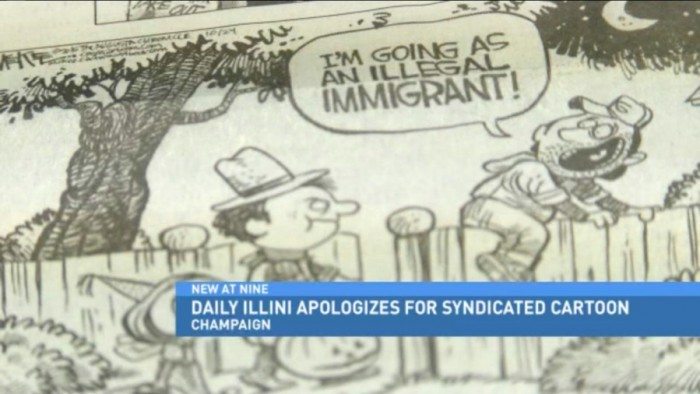 The Daily Illini, the University of Illinois’s 144-year-old student newspaper, was forced to issue an apology Tuesday afternoon after it published an editorial cartoon degrading undocumented immigrants.

In the cartoon, drawn by internationally syndicated cartoonist Daryl Cagle, a middled-aged man in a trucker hat climbs over a short wooden fence as he says to a pair of young trick-or-treaters, “I’m going as an illegal immigrant!”

The older boy in the cartoon is clearly annoyed by the man, who’s depicted as an unshaven bumpkin.

The DI, as the paper is known on campus, blamed the oversight on its production process, in which editorial cartoons are a last-minute addition.

“The Daily Illini would like to issue its sincerest apologies for the running of this syndicated cartoon,” its editorial staff wrote. “The cartoon was run with frivolous regard, and in no way represents our ideals as an organization, company or the individuals who work for The Daily Illini.”

We are canceling our contract with the company Cagle Cartoons, the wire service from which we receive our comics.

We aim for diversity within our staff and coverage, yet it is decisions like these that set us back, and for that, we apologize. The person who selected the cartoon is currently on suspension due to regrets on the oversight. This choice was made out of carelessness, not out of malice. This student has learned an important lesson about carelessness.

We unfortunately cannot go back and erase it from yesterday’s paper, yet we hope this serves as a wake-up call in our decisions as an editorial staff. We apologize again, and hope that we can earn back the trust and confidence of our readers with each issue of The Daily Illini from here on.

We recognize that a statement can not recognize the hurt that this cartoon may have caused and we apologize for the perpetration of this disgusting stereotype.

Hours after the newspaper issued its apology, La Casa Cultural Latina, part of the school’s Office of Inclusion and Intercultural Relations, posted this statement on its Facebook page:

On Tuesday, The Daily Illini published a syndicated cartoon about Halloween depicting someone in a ‘costume’ climbing over a fence that reads ‘I’m going as an illegal immigrant!’ Our students, alumni, staff, and families immediately raised their voices against such an offensive graphic. Later an apology was published by The Daily Illini. However, the issue here is not the limited time to review what was going to be published, or that it was a last minute addition to the newspaper. The issue is that an artist, a wire service, and newspaper staff all at some point thought that a cartoon denigrating human beings who have sacrificed so much for a better life and for more opportunities could be seen as funny. It is not funny at all. It is offensive, tasteless, and above all, racist.

This cartoon depicts not only ignorance but lack of understanding about basic human rights. We have failed somehow to recognize that the more than 11 million undocumented people who are in this country have left everything they have—their families, their belongings, their country, their pride in many instances—to find a better life for their families and themselves. Today is another day in which an institution of power, in this case the media, offends an underrepresented group on campus, our DREAMers. These students, who were brought to this country as children, strive every single day to prove that they also have the right to be here. They have demonstrated that even without any federal or state financial aid, they are making it, they are achieving, and we are proud of them. Today, we stand with them, their friends, their families, and their allies to voice our anger and frustration. This is unacceptable, and an apology does not take away the hurt this has caused to them and to us.

Cagle is no stranger to controversy. In September 2010 he published a cartoon depicting a bullet-riddled Mexican flag with a dead eagle in the center.

The cartoonist received angry letters from Mexicans who called his cartoon a “desecration of the sacred Mexican flag.” (In Mexico it is illegal to depict national symbols in any unofficial way.) 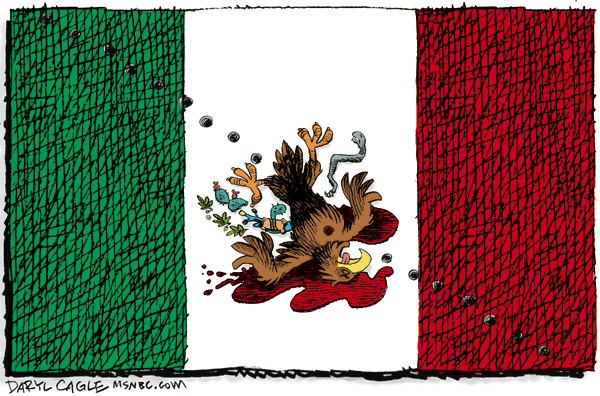 Cagle refused to apologize, instead writing:

It is the role of editorial cartoonists to criticize governments and nations, and to use the symbols of nations in our cartoons. Cartoonists all around the world use flags in their cartoons and no country can opt out of criticism because they view their own flag as ‘sacred.’ This attitude outrages my Mexican critics, especially since it comes from an ugly, foreign, American cartoonist. …

Part of the friction comes from a basic misunderstanding of what an editorial cartoon is — some people think editorial cartoons are supposed to be funny jokes. A good editorial cartoon might be funny, it might make readers cry, or think — and sometimes a cartoon that makes readers angry is the most effective cartoon of all.