The Deferred Racial Revolution in Cuba 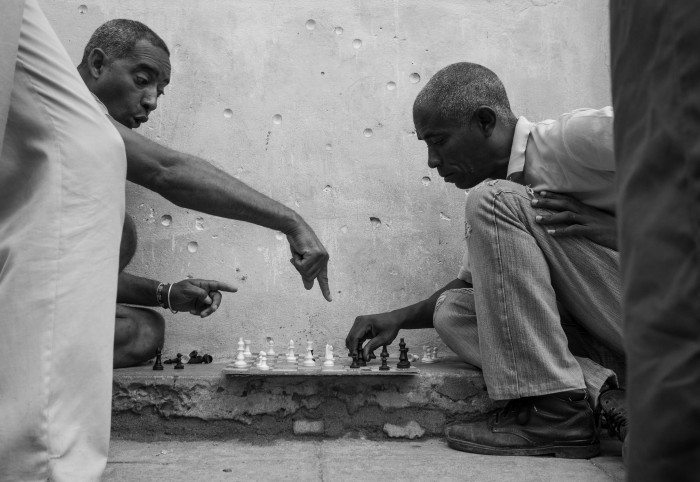 Former President Fidel Castro’s 1959 revolution was centered on the premise of socialist ideals that mandated equality for all:  Everyone would be given the exact same amount of food rations, healthcare, free housing, education and government services and all would be beneficiaries of the socialist revolution utopia. Cuba pre-Fidel had been a country where multiracial alliances coexisted with intentional and entrenched racism and persistent racial inequality. Fidel Castro’s first public address on systemic racial discrimination was on March 23, 1959, at a labor demonstration in Havana, where he is quoted as stating that:

In response to overt and covert forms of racism that existed in the job market, Castro implemented anti-discrimination regulations. In addition, he attempted to address the disparity between wealthy white Cubans and Afro-Cubans with a widespread literacy campaign, among other egalitarian restructurings in the early and mid-1960s. During Castro’s regime strides were made towards social equity. The entire country became functionally literate, regardless of skin pigmentation, and in the 1980s, a generation of young black Cubans whose parents were from the proletarian class as sugarcane and service laborers entered the workforce as professionals such as doctors and engineers. Castro alleged that such prejudice was hypocritical, with his pledge to social justice and equality and pass legislative reforms that would would desegregate beaches, parks, work sites and social clubs. He outlawed bigotry that was legal and overt discrimination, including bias in employment and education.

In the 1970s, Castro worked to increase the number of Afro-Cuban representatives in government, with the percentage of black affiliates on the Council of State expanding from 13 percent in 1976 to 26 percent by 2003. However, overall, Afro-Cuban representation dwindled as the institutions become more powerful. There have been efforts to stimulate and increase the figures for political representation. Earlier this year, Cuba elected for the first time an Afro-Cuban parliament president, Esteban Lazo, and officials point to a significant increase in the number of women and Afro-Cubans in leadership métiers. There has also been a surge of black educators and representatives in the National Assembly who can vocalize their policy recommendations for democratization measures. However, while these strides are laudable, notable experts in Cuba insists it has become all too evident that the black population is underrepresented within higher education and in spaces of financial and political spheres, and overrepresented in the black-market economy, in the unlawful domain and in marginal districts. Despite major economic and social catapulting, black Cubans remain voiceless in the political leadership.

In the years between Castro’s rise and the 1991 collapse of the Soviet Union, race was no longer an issue mentioned in his lengthy public speeches. The período especial (Special Period) was the era of dystopia in Cuba that underwent an extended period of economic crisis that began in 1989, the difficult decade following the collapse of the Soviet Union, triggering economic hardships for all Cubans. The government halted numerous social services and the country grappled with widespread shortages. During this phase, the historical oppressive measures meant that Afro-Cubans faced a greater brunt of the financial hardships. Many of the economic reforms passed to pull the Cuban economy out of its deep recession operated only to exacerbate these racial inequalities. When confronted with economic unproductivity, the revolution’s commitment to social justice was replaced with the urgent need for economic recovery, especially given the official conviction that racism was no longer a pressing issue. The racist implications of economic reforms took a back seat for the Castro government.

In March 2013, Roberto Zurbano, a top cultural official in Cuba, wrote a searing opinion article for the New York Times titled, “For Blacks in Cuba, the Revolution Hasn’t Begun,” illustrating the marginalization of Afro-Cubans. (Zurbano, the then editor and publisher of the Casa de las Américas publishing house, was demoted to an analyst as a result of the article’s dissemination.) He explained the longitudinal systemic racism that stems from the inheritance for more than three centuries of Spanish colonial rule. The legacy of slavery lingered after Cuba became independent in 1902, and a half-century of revolution since 1959 has been unable to bridge the inequality divide. “Racism in Cuba has been concealed and reinforced in part because it isn’t talked about.” Zurbano reveals. “The government hasn’t allowed racial prejudice to be debated or confronted politically or culturally, often pretending instead as though it didn’t exist. Before 1990, black Cubans suffered a paralysis of economic mobility while, paradoxically, the government decreed the end of racism in speeches and publications.”

Despite Cuba’s success in reducing racial inequality, young black males continued to be seen as potential criminals. Perceptions of people of African descent as racially differentiated and inferior continued to permeate Cuban society and institutions. The point is not that issues of economic justice and access to resources are irrelevant. Eliminating massive inequality is a necessary step if we are ever going to dismantle racial differences.

Zurbano addresses two core indicators in his article — tourism and remittances — as catalysts for the wealth divide. While the tourism industry is currently the most lucrative sector accounting for nearly 10 percent of the country’s GDP in 2013, according to the World Travel and Tourism Council, it also has the greatest racial disparity in employment opportunities. Only five percent of Afro-Cubans hold jobs in the tourist sector. The tourist resorts employ primarily light-skinned Cubans reproducing the cultural acceptance that black is inferior to white. And while minimal education and skills are a requirement in the tourism industry, Afro-Cuban progress in education within the early years of Castro’s revolution no longer holds true for achieving economic success.

The second contributing factor of the income wealth gap is cash remittances and remittances in–kind that accounts for food, medicine and electrical appliances that occupy the personal luggage of travelers, among other materials sent to Cuba from Cubans living and working abroad. In 2012, The Havana Consulting Group conducted an independent investigation and its findings concluded that both remittances combined generated income to the total of $5.1 billion. Cubans who emigrated after the revolution were white or lighter-skinned people of color, representing the majority who are the beneficiaries of remittances. In 2000, a survey in Havana showed that, “although income levels were fairly even across racial groups before remittances, white households outspent black households in dollar stores and in the purchase of major household appliances.” The survey supports that remittances provide greater economic benefit to white Cuban households that generate more capital and can consume at greater length.

White Cubans are the largest occupants of upscale housing that can easily be transformed into a food establishment or bed-and-breakfasts referred to as paladares — the most common kind of private entity in Cuba. White self-employed Cubans constitute 77 percent of entrepreneurship, according to the Havana Survey published in 2000, which determined that white entrepreneurs were more economically prosperous compared to their Afro-Cuban counterparts. Afro-Cubans are deprived from developing their own paladares due to the decrepit housing conditions and overcrowding in their homes and neighborhoods. President Raúl Castro broached the topic with subtle details and is demonstrating prioritization on the endemic issue of racial oppression. Juan O. Tamayo, former foreign editor at the Miami Herald, provided an example in his article, “Racism Remains an Issue in Cuba, Officials Say,” signaling some call to action. President Castro called for an increase of blacks in the upper echelons of government, and the efforts seem to be demonstrating progress, with the Central Committee of the ruling Communist Party indicated a 10 percent increase in the number of black and mestizo participants. In addition, public awareness campaigns were also implemented. Cuban state television launched a one-year commitment of television programs on African influence and its significance to Cuba.

However, Tamayo’s article also addressed some conflicting outcomes. Castro’s proposals to boost the economy by permitting more private enterprise and reducing government payrolls subsidies has caused widespread criticism that it will be counterproductive to blacks than whites. Heriberto Feraudy, who leads the quasi-official Cuban Commission Against Racism, indicated that Raúl Castro’s economic reforms may not be beneficial to blacks as much as their white counterparts. Between 2007 and 2013, Raul Castro restructured the economy that further exacerbated racial anxiety. Cubans with paladares or with startup funds were able to capitalize from the new decrees that allowed for eateries, service businesses, the purchase and sale of private property, and legions of other opportunities to generate income. Alejandro de la Fuente encapsulates what the new laws translate to:

the new policies produce losers, because their chief concern is not social justice, but economic growth and survival. None of these policies is racially defined, but they produce new forms of social inequalities, and those inequalities tend to be racialized quickly because of unequal access.

How can a communist country inject capitalistic policies without jeopardizing opportunities for Afro-Cubans who are struggling to be part of the new U.S.-Cuba reestablished relationship? Will Cuba espouse affirmative action policies? No one can deny that the current undergoing changes are not a monumental and historical moment for Cuba, but the overarching question remains: Will Cuba become a model country in its efforts to equilibrate opportunities for all, or will capitalism trump those ideals?

Wilda Escarfuller is a Dominicanyork freelance journalist and a graduate of Columbia University’s Latin American and Caribbean Studies program. She is a researcher specializing in race, political representation in Latin America and social mobility for Latinos in the U.S. You can follow her @wilda_e.

One response to “The Deferred Racial Revolution in Cuba”