For the Latino Community, 2016 Is a Watershed Moment 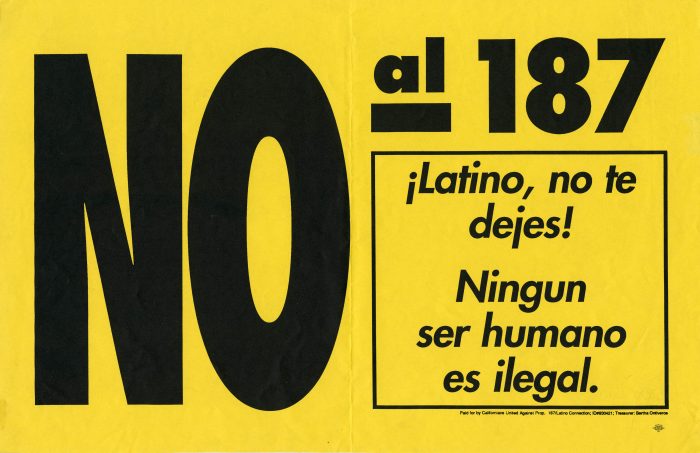 From the Collection of the Oakland Museum of California

It was October 1994, and as memory recalls, I was engulfed in a sea of white shirts staying cautiously close to my father.

Tens of thousands of people had gathered in downtown Los Angeles to protest Proposition 187, a California ballot initiative that sought to exclude undocumented immigrants from accessing social services such as public education and healthcare. Amidst the chants of Sí se puede (Yes We Can) and burning effigies of the proposition’s strongest proponent, California Governor Pete Wilson, I saw a Latino community enraged by the anti-immigrant rhetoric directed at them as well as deep concern over what the future would bring.

I was six years old at the time. Not only was this protest my first introduction to politics, but it would later serve as the backdrop in an education and career fighting on behalf of immigrant families like my own.

Fast forward 22 years, I stand once again in a turbulent battle for the dignity and respect of the Latino community. This time, the stage is bigger with the policy implications more pronounced.

In an unceremonious announcement, the Supreme Court recently left approximately 4.5 million people in the shadows who will be unable to work legally and faced again with the prospect of deportation.

This heartbreaking news comes just weeks after the worst mass shooting in American history that killed 49 people, a pain overwhelmingly felt by Latinos in the LBGT community.

To add insult to injury, all of this has occurred in a year where presumptive Republican nominee Donald Trump has hurled insults at Mexicans and even questioned the partiality of a judge because of his Mexican heritage.

When looking at the current state of the presidential race, it appears that I am stuck with choosing two controversial, disliked candidates to address the current crisis facing the Latino community in the United States. While Mr. Trump’s xenophobic comments deeply offend me, I remain unconvinced that former Secretary of State Hillary Clinton is a better alternative for Latinos. Her inconsistent stance on deportations of unaccompanied Central American children and her hollow pledge to pass immigration reform complicate my ability to trust Secretary Clinton.

I will nonetheless cast a vote this election despite my reservations about the two leading candidates. Every election provides a stark reminder of what it took for others who came before me to give me this right.  I want to honor those sacrifices by laying a claim to the democracy I want to see for this country.

But not everyone in my community shares my passion for civic engagement. In fact, overall Latino voter turnout has lagged behind whites and blacks. For as long as I have been alive, stalled progress in key issues such as immigration reform and the economy have left Latinos dissatisfied with the political system.

This November, the Pew Research Center reports that 27.3 million Latinos are eligible to vote in this presidential election. Approximately half of these voters are millennials like me who are concerned about student debt and finding employment, but also worried about the legal statuses of our undocumented friends and family and the physical and verbal violence perpetuated against our community.

How we turn the page for Latinos in this country and achieve the elusive dignity and respect that is long overdue will find its answer not in the voting booth however. It will be found in each other—in places where Latinos already maintain a considerable presence and influence:

In a Latino church in South Texas where congregants demonstrate compassion by housing and feeding the thousands of migrants coming over the border.

On a stage on Broadway where people can see a Puerto Rican entertainer teach American history while simultaneously redefining it as well.

And as the nation and the world recently saw, on a dance floor in Orlando where young gay Latinos gathered one night to validate each other’s identities and live their truth before tragedy arrived at their doorstep.

Political pundits often say during presidential elections that this election will be “the most important election of our lifetime.” For the Latino community, this election means so much more. When confronted with a host of issues ranging from deportations to rampant gun violence, it has now become a matter of life or death. Until our politics decides otherwise, we only have ourselves to protect.