“To be sure, there are vacant buildings and empty rubble-strewn lots in my photographs, but what you won’t find in any of my images are poor people. Only victims of circumstance.” — Edwin Pagán 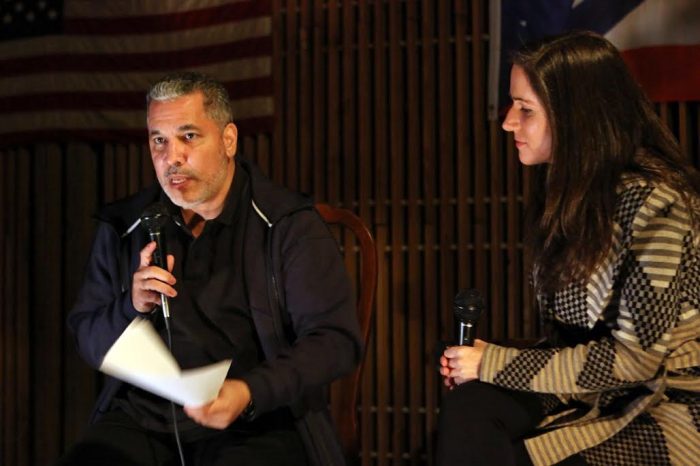 The author reading his letter. (Photo by @fotojunki)

Poems are best when recited and letters are meant to be read. I’m neither a poet nor a performance artist so I share my South Bronx Love Letter in the form of an actual letter, which I will read for you here tonight. What I am is a visual artist, a chronicler of MY times, whose latent image testimony has been laid down on a bed composed of silver salts, waiting to be harvested and re-committed to memory in the form of a photographic print. What I call a “Cultural Identity Reclamation.”

It all started with me passing a darkened room located in a youth recreation center’s basement at the age of ten. That was back in 1974, in case you’re wondering.

I didn’t know it then, but that mysterious and magical “dark room” would consume my creative attention for the next eight years as my first mentor, Ernesto Lozano, took me under his wing and began teaching me about photography: how to create images, process film and make prints. That big brothership would not only open up my imagination to my own community, but also places far beyond the boundaries that should have been my entire world. It would also begin the slow process of teaching me how to “see” instead of merely “look.”

I was born in the Lower East Side, but my mother moved to the South Bronx before my first birthday. Melrose. Mott Haven. Morrisania. Longwood. Hunts Points. Port Morris. Some know it as the Boogie Down, the BX, the South, South Bronx. I just call it home.

As a young boy I remember moving a lot. One day we’d have hot water and heat, and the next it would be cold and the lights in the hallway and stairs would be cut off. Then came a fire in the middle of the night, and we were moving again. No rhyme or reason that I could fathom at that tender age, but the routine of moving was simple enough to grasp, even for this 5th grader.

Once, during one of those moves, we floated from one neighborhood to another just a bit further uptown. With much acumen and foresight, although she only had a third grade education in Puerto Rico before she traveled to New York City with my sister in tow in 1957, my mother enrolled me in the Hoe Avenue Boys & Girls Club so that I could do something productive with all that extra energy other than break the few possessions she had. And because she was a single mother.

It’s ironic that as a kid from the so-called “poorest congressional district in the nation,” I was introduced to one the most expensive hobbies—photography. Fate is a trickster, but also wise, very much like my mother. Of course this was long before digital photography, before the Internet, and decades before Instagram. Back then the struggle was real. And the word “real” on this sheet is in bold, italicized, and underlined… REAL.

This art form introduced me to a whole new world. And to the extent that photographs can be a testament of recorded history, they are also the residual recollections of events I’ve personally witnessed and experienced, and by extension a record of my own life because I AM the boundaries of each frame.

Unlike now, where you can pop-off like a cowboy in a TV western who never runs out of bullets, back then we could only shoot 24 or 36 frames per canister of film, so every shot counted. And those are the first lessons I learned as an artist as I was thought to shoot: see what others could not, work the shot, tell a story in one frame and don’t waste valuable medium.

I sometimes tease the youngins with the hashtag: “ihavenegativesolderthanyou” (it’s true, look it up). But I do this not to degrade or belittle, but only to solidify the notion about this photo game being long, and that real artists are not short sighted. That it’s more than a quick “branding-to-riches-and-fame” play, but about a whole body of work, and more importantly about what the work is about, as well as what it represents. In that regard, I’m proud that I have contributed in some small way to OUR South Bronx family album.

To be sure, there are vacant buildings and empty rubble-strewn lots in my photographs, but what you won’t find in any of my images are poor people. Instead, you’ll find people full of life, courage and dignity—even when they were down—who rose up from the ashes of neglect, economic opportunism and political indifference, and whose clarion call became “Don’t move, Improve!” And improve they did… against all odds. And they stayed and carved out lives here.

In these photos you’ll find mothers and fathers, sisters and brothers, aunts and uncles. Families. And children. Always the children. Playing. Smiling. Sharing. Clothed and with full stomachs, looking content and not wanting. Did I mention there weren’t any poor people in the South Bronx? Only victims of circumstance.

It wasn’t until I was given a few vouchers by the Boys & Girls Club for some courses at the School of Visual Arts that someone asked me for the first time how it was to be “poor in the South Bronx.” “I don’t know” is the only truthful answer I could provide. I’m not sure what they wanted to hear, but I could tell it wasn’t the answer they expected. My bad.

Which begs these questions: Why are there all these poor people with so much money suddenly trying to come to the South Bronx? And what the hell is the Piano District?

Last October I was compelled to go back and look through my archives and see if I could find any pianos in my images. I thought that perhaps I’d find a few somewhere in the background here or there. Perhaps right behind Don Pedro sitting on a bench in Crotona Park, our just outside of Rosita’s corner bodega. If I had gone to church, I may have had a photo of a piano in one of those, but I didn’t (and don’t), but that’s another story for another time. After a year of scanning my negatives, I’ve yet to find a single piano anywhere. All that work in vain. ¡Coño!

I WAS THERE through the fires, and can still recall those days whenever I smell burning wood. Barbecues and mesquite are a traumatic bitch, for sure, that trigger less-than-fond memories of that time.

I WAS THERE during the Blackout of ‘77: Yeah, THE ‘motherfucking blackout,’ when the lights went out right in the middle of a crazy game of Run, Catch and Kill. I was “it” and on the run, so thank goodness for small favors.

I WAS THERE when Crack cut through our communities like a chainsaw through sweet flan, and I saw so many of my beautiful friends get caught up in “the life” for a hit, or several of the fellas loose their lives altogether playing a losing game. Fortunately for me, film, developer and printing paper was too expensive so there wasn’t any money left over for these “magical rocks.” Besides, I was lucky that I always had the Club, my mentors and my mother keeping a sharp eye on me.

But we were also lucky to have parks and playgrounds where we could play on broken swings and rusted monkey bars, and you always knew where we’d just come from by the Chocolate oxidation on our hands. We also had the Dover and Art theaters where we could watch three feature-length Kung-Fu films on Sundays—for two dollars! You could always find us yelling at the screen in the balcony.

After a while, we got older and started going in different directions as we started families of our own, moved away, or just passed on. Soon we only got together during a funeral for one of the fellas or girls, and when that reality set in it hurt to the core. So we decided to have an annual “Old Timers” reunion in front of the Boys & Girls Club, the place where we’d spent so much time in our youth. So much so that we called it “the magnet” because no matter what we were doing or where we were, we’d always end up in front of its doors. And it seems we still do: every last Saturday in June now goes the tradition.

In 2017 it will be the 20th anniversary of our gathering. It’s when we get to check “the Crew’s” pulse and catch up on what’s happened in the last year, especially happy when it’s the only time we’ve seen each other during the year because it means no one has passed away. Not everyone made it across the decades to join us in this annual reuniting ritual, but I still remember them fondly: Macho, Padro, Gladys, Margie, Billy… Too many to mention here, really…

There was this one Colombian kid who came into the crew late in the game and was a decent, shy, and polite kid —not like the rest of us— who was thrown into a pond of Puerto Rican and black piranhas. With time, we all grew to like him and his younger brother and he became part of the inner circle because although he wasn’t from the streets, he had heart and wasn’t a punk. We just called him “Foreigner.” I wish I could remember his real name, but that’s the thing about nicknames, right? Foreigner eventually joined the military, saved up his money and started a one-man car service when he got back home, a slamming black OJ tinted 360-degrees. One day a guy jumped out of his car to beat paying the fare. Foreigner gave chase… and was killed… stabbed right in the heart. Like I said, he wasn’t a punk. Damn, what was his real name?!

I’m happy to say, however, that the majority of the peeps from my youth are doing well. Looking forward to the big 2-O.

Today I continue to train my eye as an artist, the lessons never end, there’s always more to “see.” And although I have also ventured and focused my lens on Spanish Harlem and the Lower East Side over the years, the South Bronx continues to be my primary muse. She’s elegant, smart, sassy, colorful, speaks a dozen languages, can dance (really fuckin’ GOOD), and she’s street smart and nobody’s fool. More importantly, she’s my longest-lasting love affair. We started dating when I first became exposed to my art form, and we were married when I started to “see” instead of just “look.” Hopefully we will grow old together. And, if I’m lucky, I will die in her arms.

Looking through my photographic archives today, I can safely claim that no South Bronxites were harmed in the making of my art. Can you claim the same? And if so, how can we build together?

I’ll leave you with this final question: Where exactly is that Piano District I keep hearing about, again? I’m not quite sure, but I do know this: You can’t get there from here. And you NEVER will!

On October 26, catch a LIVE Latino Rebels Radio event from The Bronx as we discuss issues of gentrification and what it means to the community. RSVP here.

An original version of this letter was first published at ThePaganImage.com

Edwin Pagán is a first-generation Nuyorican. He is one of the community’s most renowned photographers of our generation and one of the founding members of Seis del Sur. He tweets from @thepaganimage.