Speaking Frankly With Our Children in the Age of Trump 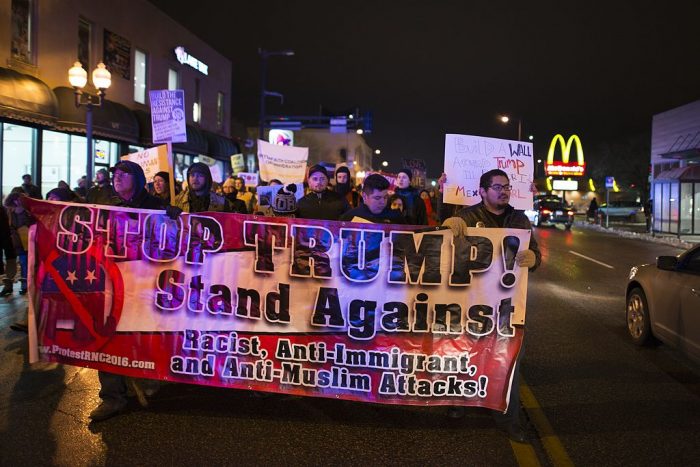 The election of Donald Trump represents a new period of intolerance for our communities. Many racists who were previously muted by expectations of political correctness among their friends, colleagues and neighbors are now flippantly spouting hatred and vile anti-immigrant messages. And worst of all, our kids are listening to it.

In the past several weeks many events have transpired that have led to a flood of media messaging, on radio stations, TV and other news outlets. Some of that messaging is subliminal but much if of is boldly anti-immigrant and mean-spirited.

Our children are like sponges. They are absorbing it all. In the midst of factual reporting, there are also gross misrepresentations of our people being blasted onto the airwaves by right-wing and alt-right personalities whose aim is to unsettle us. Racists fully intend to cause us anguish and suffering. Hate speech is potent. It’s bad for your health. And while in some doses it’s bitterly tolerable, it is the abundance of it today that is causing us so much grief and anxiety. The prevalence of bold hate speech in our midst in this moment in history is particularly contraindicated for our children. Adolescents and children are not always prepared with the necessary tools to brush off these hate messages without causing children to question who we are and what we as immigrants and people of color represent in this country.

We are people comprising the cultural and racial evolution of a storied cone of colonization. Our very existence is in spite of the attacks on our respective cultures and still, after all that we have survived, we remain strong in our resolve to raise up our children. We want our children to do well. We basically subsist to help lay the foundation for our children to have a good future in this country.

Like everything having to do with families, nothing is perfect. I wasn’t raised in an ideal household. My family struggled with self-deprecating hurtful beliefs about us as immigrants. There were times when I was scolded and force-fed misrepresentations about why I needed to respect white Americans in my community.

For my parents and relatives to reinforce messaging about “americanos” being in charge meant that I understood at an early age that there were those at the top and those at the bottom on the racial and cultural hierarchy.

I particularly remember that our landlord would come by to collect the rent that we were short on and my mother would insist that we all bow our heads in humility. I was taught that the white man was the man, the “good hombre” and that our family was blesses by his mercy upon our impoverished, financially strapped household.  He finally threw us out one day. The cockroach infested home that was my cradle would no longer be my sanctuary. I didn’t know anything about equality or basic needs. My instinct said “we are nobody in this country and now we have no home.” I would lower my head as I followed my mother down the street. I didn’t lower my head so much because I was sad, as much as because I was ashamed of being who I was.

I was an undocumented child in the United States for many years.

During my childhood,I heard and internalized a multitude of racially-charged messages full of hate and intolerance much like those I am hearing out in the community today. Unfortunately for me at the time, some of my family and community members reinforced this hateful messaging. We were mojados (wetbacks), we were ilegales (illegals), and we would coward in the face of intolerance. We didn’t want to call attention to ourselves for fear of being detained and deported. In time, feelings of humiliation would fuel a rebellion within me. The world took many turns before I emerged from the fog of hate as a woman with the requisite self-ego to channel an oppressed warrior for justice, a warrior for all of our people.

Our children in this day no longer need to have this kind of humiliation visited upon them. Our communities and our leaders are much better positioned to change the dialogue so that racial slurs and inhumane messaging common in my childhood are vehemently rejected in our homes and communities. The sirens of justice blaring are the voices of the young DREAMer movement in this country and the legacy of activists who trail-blazed proclaiming “no papers no fear.” That kind of bravery shifted the thinking in our invisible immigrant communities and helped many come out of the shadows in solidarity to aid one another.

Yet racial tensions and attacks on people of color such as those visited upon our African-American brothers and sisters, and the negative messaging about refugees and Muslims has been particularly heinous. The blatantly racist and overtly hateful voices of ignorance in America are the worst I have seen in a very long time. Every day women’s rights and the rights of individuals with regard to their sexual orientation and gender roles are being undermined. There are increasingly violent attacks and other non-physical aggressions being reported by immigrants and people of color. Much of the racist messaging is coming from organized groups who preach a doctrine of hate and intolerance. All of this is happening at a time when the recently-elected administration leads a perfectly-positioned White House that will further the neoliberal agenda that feeds on fear and paralyzing distress in the population.

No minority is safe in this environment. When the austerity agenda of this administration hits hard, the services to war veterans and social safety net programs such as housing, health and environmental protections will be gutted with a fierce spirit of vengeance. Our civil rights are being violated and racial profiling against minorities and people of color has taken a new level of priority within law enforcement agencies.

What can a parent do to protect the children?

When I was a child, I heard many hateful messages and from the mouth of racists I was called everything unimaginable that a child should never hear. I was told just about everything except what I would one day die of. Unfortunately, my parents and relatives were not the kind of people with the gumption to resist or fight back hate.

We were humbled pacifists.

We avoided calling attention to ourselves for fear of the men who roved our communities in those green trucks. They wore green uniforms and they had guns. It is my testimony that silence is torture. Humiliation leaves its ugly scars.

We must demand that our civil rights not be trampled. We have to live our lives in a manner in which we can one day say that we were unapologetic in resisting hate speech and the abuses visited on our people in the Trump era. We must do this together as a good example for our children. All of us have the responsibility to take seriously the challenge to resist. We can start in our own homes. We begin by being perfectly frank with our children. This is how we combat the hateful speech in our midst. We instill and reinforce certain truths that our children need to hear.

Five statements we can say to our children every day:

These words are like spinach for the self-esteem of a child grappling with what to make of the hateful messages they are hearing all around them. Children need to know with certainty that they have the full support of their parents no matter the political terrain we are navigating as communities of immigrants. We will not permit the words of organized hate groups and their spokespeople to interrupt the peace that we need in our homes so that our children can grow and develop. Be valiant my people. We are a community. We will never bow our heads again in humiliation.