A False Majority for Statehood (OPINION) 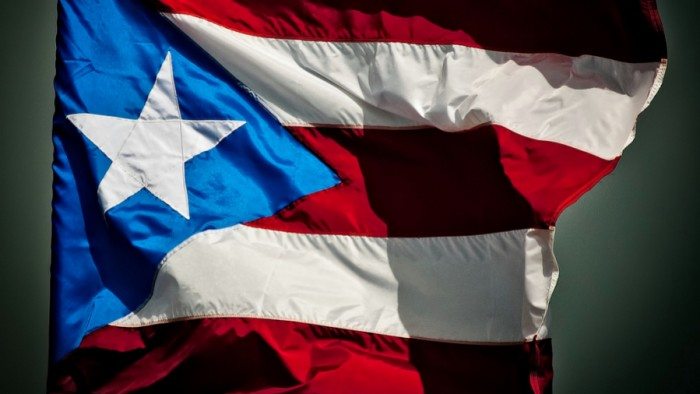 Puerto Rico’s legislature just approved yet another statehood referendum to be held during the summer of 2017. This will represent the fourth vote in the last 25 years on the matter, as well as the latest attempt by the statehood movement to squeeze another star onto the United States flag. Nevertheless, a closer look reveals a scheme on behalf of the ruling New Progressive Party (PNP) to create an artificial majority in favor of statehood. Their tactics involve trickery in wording ballot options in a manner that will favor their preference.

A quick review of how they have maneuvered previous votes on the matter reveal their intentions. The first of PNP-authored referendum occurred in 1993. The options included statehood, independence, or a continuation of the current commonwealth model. After aggressive campaigning on all sides, commonwealth won with 48.6%, with statehood trailing second at 46.3%. Despite the commonwealth win championed by the opposition Popular Democratic Party (PPD), the PNP won re-election three years later and again began conjuring another referendum.

In 1998, a second PNP referendum was rolled out. This time, the question was revised with the intention to split PPD sympathizers between various options and thus produce a plural majority for the statehood option. Along with commonwealth, “free association” was added to the ballot options. With this, the PNP hoped to capitalize upon technical divisions within PPD ranks, whom have long debated among themselves whether or not to continue the current territorial commonwealth status or developed it under a United Nations-defined form of association. After intense court battles, a “none of the above” option was added to the ballot—ultimately winning more than half the vote. The PNP soon after lost the general elections with the PPD in power for two terms. 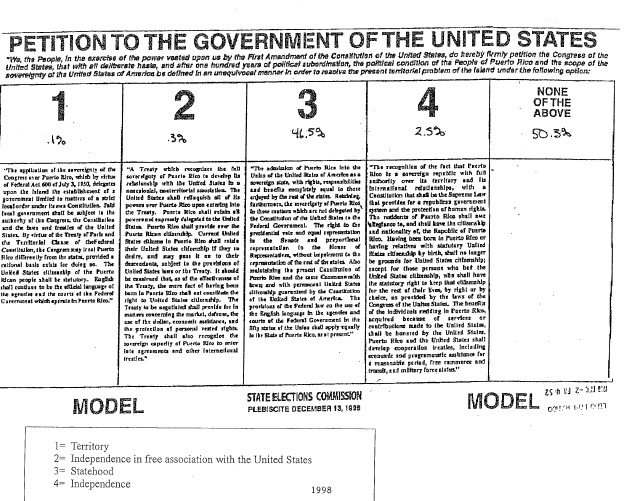 Upon returning to power in the 2008 elections, the PNP initiated new efforts for a third referendum, held in 2012. This time, there would be two questions: first, voters were asked whether or not Puerto Rico should continue under the current commonwealth model. The second question asked citizens what they were to prefer in case that commonwealth lost, with the options being statehood, independence or free association. Knowing that the commonwealth option alone no longer commandeered a majority of votes, the PNP knew that if it were eliminated from the ballot that it would be inevitable for statehood to win with a clear majority.

With no “none of the above option,” the PPD machinery ran a blank ballot campaign, hoping to protest what it saw to be an unfair referendum. Though the PNP expectantly won the vote by 61.2%, but once blank votes were factored, its numbers stood at a mere 44.4%. The PNP’s marketing strategy was foiled, as the party’s exaggeratedly-inflated majority felt upon deaf ears of Congress. Though they carry no legal weight, the blank votes demonstrated that the majority of Puerto Ricans rejected statehood.

Now, the PNP is back in power and once again is cooking up another round of voting. The questions have been carefully crafted to produce the supermajority it always hoped for, with the options being statehood and independence, with “free association” brushed off by the PNP as a modality of independence. “Commonwealth” was eliminated from the ballot in its entirety. PPD proposals to include commonwealth and free association as their own ballot options were shot down. Finally, the law which mandates the vote includes specific text meant to not tally blank votes.

The law referendum represents quite possibly the most obviously biased of the PNP’s initiatives. Even the Puerto Rican Independence Party voted against the measure—a rarity for a party that often aligns itself with the PNP to erode PPD-supported referendum options. The blatantly skewed law narrative reads as a manifesto, clamoring for statehood as a means to conquer Puerto Rican poverty. Not to mention, lawmakers carefully assured that the bill number would be one in sync with their goals: Senate Bill 51.

The PNP has rushed a number of controversial bills through the state legislature in recent weeks, including labor reforms that rock both private and public sector employees. The biggest austerity measures are soon to follow and should echo the protests and strikes that characterized the precious PNP administration. This ill-timed referendum is simply a rhetoric effort to pump much-needed political capital into the PNP, who won the 2016 elections with the smallest mandate in the island’s history. So journalists and analysts beware: the coming statehood vote is far from transparent, participatory, fair or well-intended.

Luis Gallardo is a municipal legislator from Puerto Rico. He has an MPA from Valdosta State University and a JD from the University of Puerto Rico. You can connect with him at @LuisGallardoPR.