Trump Is Winning the ‘Criminal Immigrant’ Narrative: What Are You Going to Do About It?

Listen, we can remind people that the recent tragic news of two Maryland high school students being accused of rape is just an isolated incident that involves an undocumented 18-year-old teenager. We could easily remind people that actual data for the past 17 years would confirm that the undocumented immigrant population is not really more prone to commit more violent crimes than native-born Americans. We could also remind people that when it comes to rape in the United States, 57% of all sexual violence perpetrators are white: 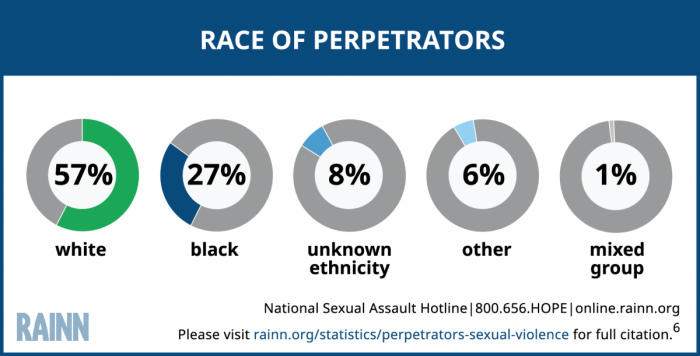 But no matter how many facts we share about this, not only here but in other pieces we have written over the years, we will be honest with you: President Trump, the White House and their media friends are winning the “criminal immigrant” narrative.

The cherry picking of crimes continues with little pushback, since the Maryland case has already made the White House press briefing. Earlier this week, White House press secretary Sean Spicer clearly took this tragedy to exploit the politics of it all:

“I think from an immigration standpoint, clearly to see somebody, there are so many facets of this case that deserve question. Why was there, I think he was 17 or 18 years old … How does that person get put into the ninth grade? There are so many issues that come up in this case. I will leave it to authorities to get through, but I think that we are in the early stages of this and there is a lot that needs to get addressed with respect to this case in particular.

I think part of the reason that the president has made illegal immigration and crackdown such a big deal is because of tragedies like this We act so many times and we talk about this and say, ‘Why is the president dealing with this and because of this priority? Well, part of the reason is because the tragedy that this young girl dealt with, had inflicted upon her… this is why he’s passionate about this. Because people are victims of these crimes in terms of—they are victims of the economic pieces, there is national security. But immigration pays its toll on our people if it is not done legally. This is another example and it is why the president is so passionate about his.

He recognizes it is multi-faceted—why we have to be tough at the border, why I just read off that this executive order is dealing with people who have committed crimes who local enforcement agencies or municipalities at the state level are not dealing with this. If you go to the ICE website and download this, you will see it is over 30-something pages of cases where there is a person who is convicted of a crime that local people, local municipals and law enforcement, for whatever reason, in some cases they are prohibited, but for one reason or another are not enforcing the law and not turning that individual over to federal authorities to be deported and I think this is another example this issue needs to be addressed.”

Nowhere will Spicer ever step back and remind people that the data does not support the president’s beliefs or that a large contingent of U.S. mayors (both Democrats and Republicans) will be the first to say that if you criminalize the entire immigrant community, it will actually make local communities less safe. And we are 100 percent sure that Spicer will never address this:

Two teenage girls raped and one dead after being forced to drink liquid meth by Border Patrol. Will @WhiteHouse publish these crimes too?

The history of exploiting and exaggerating immigrant crime is a purely American skill, and yes, it wasn’t based on actual data back then as well. So it should come as no surprise that Trump and his supporters will be quick to jump on the very few crimes committed these days by immigrants and make it sound like it is some disturbing national trend (it’s not). Fear sells, no matter the data and no matter the fact that American taxpayers will be paying for a border wall, and not Mexico.

So how does one challenge the Trump narrative? Well, it starts with Latinos, and it needs to become part of any discussion where issues like these must be in people’s faces. For instance, and with all due respect, when Latina business leaders met with Ivanka Trump last week and the ridiculous painting of immigrants as hardened criminals wasn’t even discussed, that was unacceptable. 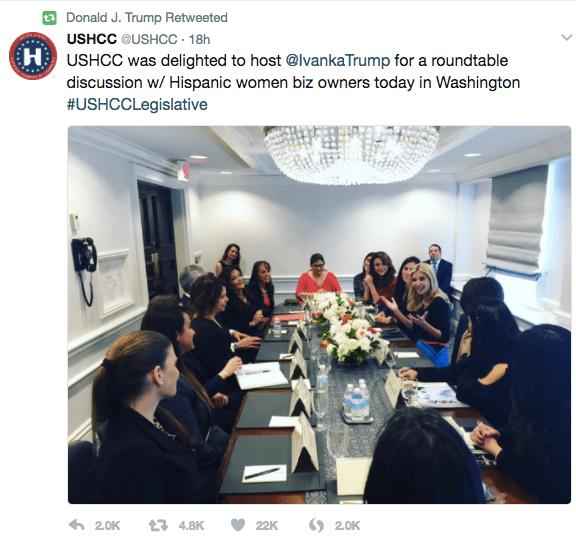 And yes, this means you, Javier Palomarez of the United States Hispanic Chamber of Commerce, who said this about the Ivanka Trump meeting:

“She made it clear that she has a passion around empowering women,” Palomarez said in an interview between the two meetings, adding that the topics of Trump’s proposed border wall and his crackdown on people living in the U.S. illegally had not been raised.

“There will be time and the circumstances to do that,” said Palomarez, adding: “They’re not done deals. The negotiation, the conversation continues.”

There is no waiting on this any more. The more silent people are about how the president manipulates reality, the more Trump wins the message war. And he has the power of the federal government behind it:

So keep telling the real stories. Keep reminding people that for every alleged rapist out there, there are countless of stories of mothers, fathers and young people who are getting deported for nothing. Keep reminding people that the federal government has thrived off an immigration detention policy that has lined the pockets of private companies. For the past 20 years (under both Democratic and Republican presidents), Latin American immigrants have been seen as “the others” and this country has criminalized them, so much so that the vast majority of Americans think U.S. Latinos are criminals.

What are you going to do about it?