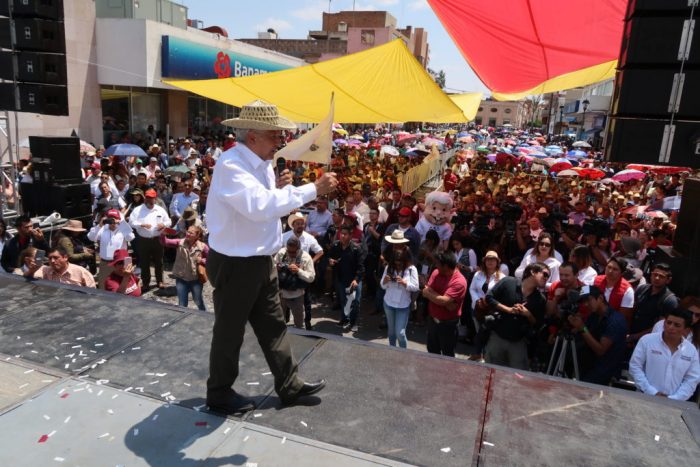 “Populist,” “anti-business” were the common media shorthand to describe Andrés Manuel López Obrador in his failed 2006 and 2012 bids to become president of Mexico. This round, he is now the frontrunner for the July 1 general election by a wider margin than in previous attempts, having attracted a new and much broader coalition.

An early April Bloomberg poll tracker showed him with a double digit lead over his opponents, Ricardo Anaya, representing the National Action Party-led coalition, known as the PAN; José Antonio Meade for the Institutional Revolutionary Party-led coalition; and the independent candidate Margarita Zavala.

“He still is in favor of justice, redistribution, and equality as ever, but being particularly clear this time that he is absolutely not anti-business,” said John Ackerman, a professor at the National Autonomous University of Mexico and a López Obrador supporter. “He never really has been, but has been much more transparent about that and much more, you know, openly allied with businessmen.”

Ricardo Monreal, a longtime close ally of López Obrador, commonly known as AMLO, and a regional coordinator for his current presidential campaign, made a similar point in an interview he gave in March of 2017, noting López Obrador’s reconciliation with the business sector, along with the previously neglected groups of religious associations, the media, and various opinion leaders who, for the most part, opposed him in the past. Included in López Obrador’s current electoral coalition is the small socially conservative party, the Social Encounter Party, which is made up of mostly evangelicals.

“In 2006, there was a clear perception by the end of the campaign among the business sector that AMLO was a risk,” said Kathleen Bruhn, a professor of comparative politics, identity, and Latin American Studies at the University of California, Santa Barbara. She added that negative campaigning from center-right PAN fostered this impression. “I do not think that at the beginning of the campaign this perception was nearly as strong,” she said.

She also noted AMLO’s pro-business pivot this round. “AMLO does seem to be making an effort this time around to stress his friendliness to business,” she said. “Members of his future cabinet have made presentations to business organizations and he himself recently spoke at a banking conference.. His spokesmen have affirmed publicly his commitment to NAFTA and to the recent energy reforms,” she said. “As a reward, he is not perceived as much as a danger to Mexico as in 2006 (but still is by some people who are not convinced he has changed.)”

The new strategy is most visible in the relationship with Alfonso Romo Garza, a well known multi-millionaire businessman in Mexico, who has been tapped to lead the creation of the National Project 2018-2022, a report of policy proposals to transform the country. Romo previously supported the candidacies of Vicente Fox in 2000 and Felipe Calderón in 2006, both members of PAN. Romo officially supported López Obrador in 2012, but is more deeply involved in the 2018 campaign. López Obrador also named Romo chief campaign strategist and made him his liaison with business, government, and civil society, and has even suggested that he will be his chief of staff.

There are also some well connected figures associated with those dubbed the mafia del poder, a term López Obrador broadly used to describe his opponents who use power for selfish means.

Miguel Torruco Marqués is López Obrador’s proposed secretary of tourism. Torruco Marqués served as the secretary of tourism for Mexico City up until last year. Although he would not hold a high-power position in a López Obrador cabinet, he is connected to the highest echelons of power in Mexican society, as his daughter is married to a son of the richest man in Mexico, Carlos Slim.

In addition, a number of former members of the PAN have joined López Obrador’s campaign and political project.

The campaign’s coordinator is Tatiana Clouthier, a former member of the PAN and the daughter of the PAN’s presidential candidate for the 1988 elections, Manuel Clouthier. A former president of the PAN, Germán Martínez Cázares, is contending for a seat in the Senate as a member of the National Regeneration Movement, known as Morena, the party founded by López Obrador. Gabriela Cuevas, a recent PAN defector, is listed to run for the Chamber of Deputies on the Morena ballot. José María Martínez, a senator for PAN and member of the party for 27 years, recently defected to help Morena and López Obrador.

In 2006, the PAN’s campaign against López Obrador focused on the danger he represented to the country but recently, prominent members of the 2006 PAN campaign have come out to express the opposite view. Ackerman believes that bringing such people into the López Obrador orbit indicates his intention to build a national government, more of a rainbow coalition than in previous campaigns, and that this is not a question, as some have suggested, of López Obrador opening himself up to opportunists.

“People are surprised that he is in the end, a politician, not in the corrupt way, but in terms of negotiating and trying to construct unity and so they try to use that against him,” Ackerman said, as in, “‘look, look he’s a politician like the rest of them.’”

“But,” Ackerman continued, “he’s not because the agreements, the openings that he is creating to these different groups, are not pacts of impunity, they’re not pacts for changing policy, they’re just, to the contrary, open, other points of views.”

Said Bruhn: “I do think that his public inclusion of figures that might arguably belong to the mafia del poder is an indication that he means to change his public image. This is his best chance since 2006 to win the presidency, and he doesn’t mean to make the same mistake he did back then and assume he could win only with his solid base of support.”

Enrique Ochoa-Kaup is a freelance writer currently based in Mexico City covering the 2018 Mexican elections.