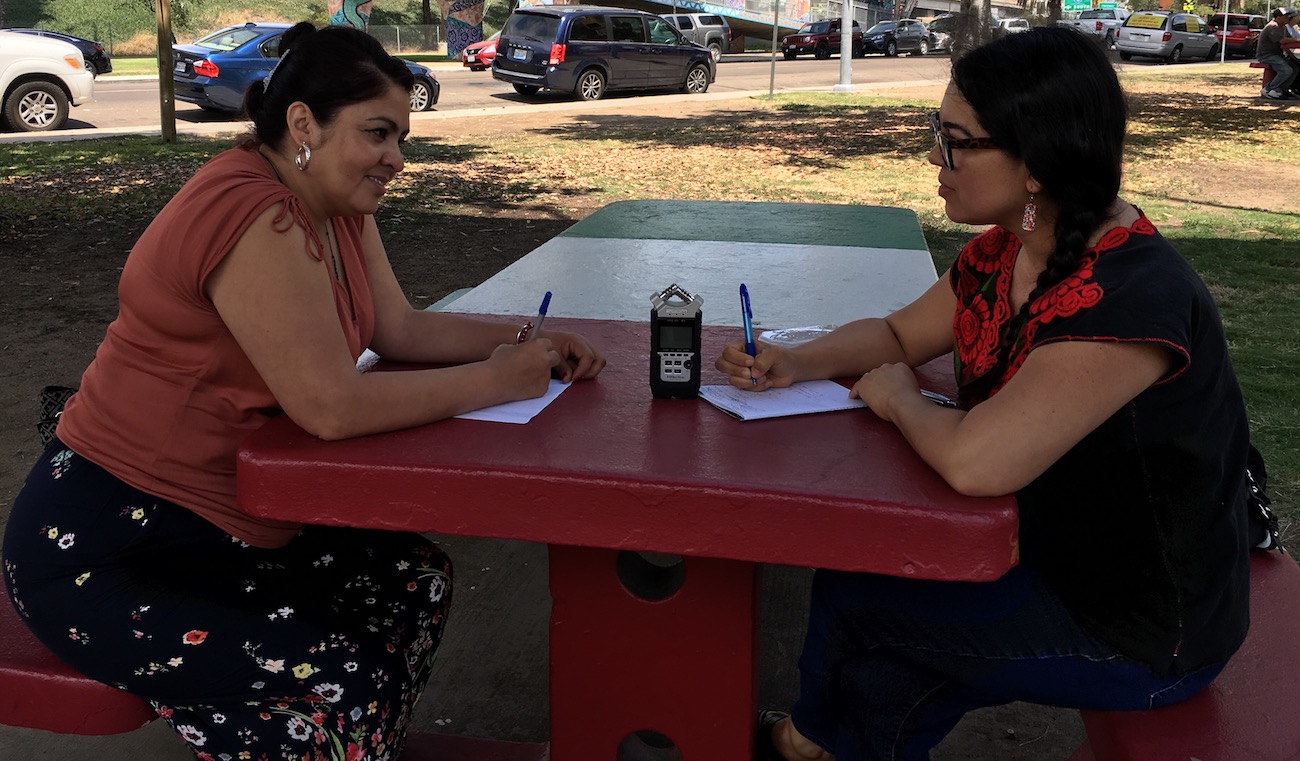 SAN DIEGO, CALIFORNIA — At a concrete table painted green, white and red, I sit down to interview the senator-elect from the leftist party of Mexico’s new government MORENA.

Nestora Salgado appears to me valiant but she quickly corrects me and tells me she is not  “valiant” at all, rather she protests, is a “dreamer.”  This woman who migrated to the United States many years ago and labored in blue collar jobs, did something very uncommon, unheard of really. She returned to Mexico and launched a grassroots fight to restore dignity to her township which she had found in distress due to insecurity. A major public figure on the left now, Salgado is charting new territory.

As we settle into a conversation, I remark that the park we are at was proudly proclaimed “Chicano Park” here in San Diego, California by people like us who wanted to preserve this land and they had a vision for it.  Chicanos in the 70’s didn’t want it to be turned into an industry wasteland, so they took it over and proclaimed it for Aztlán. I then ask the senator-elect if there is something in the park that reminds her of her own fight and grassroots efforts in Guerrero.

“Truly, yes there is,” she immediately replies. Salgado then signals over to some color-drenched murals depicting pre-Hispanic deities that were meticulously preserved on the side of a freeway overpass. Above our heads, hundreds of cars pass by going 65 miles per hour, completely unaware that we exist here under the bridges that join Coronado Island to the City of San Diego.  Salgado suddenly points to a statue, “look, there’s even an Emiliano Zapata here.”

Salgado is most struck by the faces she sees at Chicano Park. She understands that each face has a story—she is a former migrant. She knows the voyage of the migrant is not an easy one. And she knows that where there is migration, “there is a reason” she points this out and it becomes a theme of our interview.

“In Guerrero, the issue of forced migration is rooted in a fundamental lack of opportunities and real eminent risks” she begins softly.  “Many have chosen to migrate in order to bypass the overwhelming influence that hit men have over communities and to avoid being caught in crime syndicates and many times, to avoid being subjected to human trafficking” she speaks with intensity because her message must carry and she wants Americans to understand what forced migration is.

“There are very humble people that have been forced to cultivate poppy as a crop,” she lamented.  “The insecurity, murders, and disappearances all contribute to Mexican’s dreams and yearnings of something better.”

These are the same reasons she cites as having factored in the elections. One thing is for certain, no margin of error needs consideration. Mexico’s MORENA leftist party didn’t win, they overwhelmingly swept the elections from poll to poll.

The new federal government under Andrés Manuel López Obrador (AMLO) has declared that Mexico is a country rich in values and resources and must prioritize now all resources to the benefit of its people and not the transnational corporations as in the past. The government must act swiftly on the issue of security.

“We Mexicans must have alternatives to migration,” Salgado states. “A rural farmer must be able to grow and harvest maíz and afford to feed his family from the earnings yielding from his plot of land.”

She points with conviction and a glare in her eye. She really means it. Her vision for the country is shared by the MORENA platform and includes security, peace, and reconciliation as cornerstones for prosperity in the future of its democracy. But she quickly cautions that the citizens of Mexico must all share in the participatory responsibilities.

“It is all of our responsibility” and “change is in our hands,” she says with the same fierce conviction of a woman who has gentle eyes but speaks strong and profound truths about the most pressing issues that confront a North American democracy. 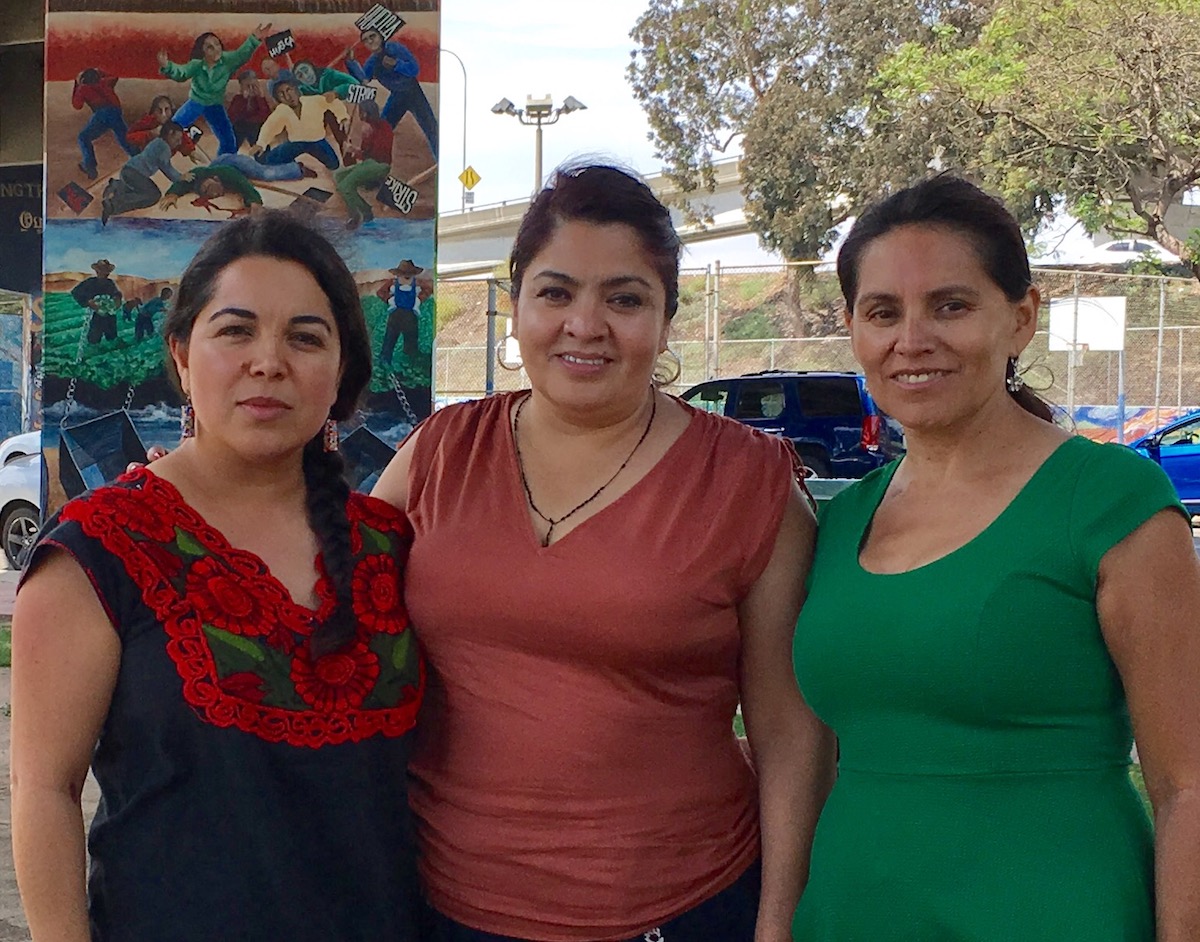 “Guerrero is an abandoned territory, a state that lacks much. We must invest in Guerrero. There is a lot to do so that citizens can live off of their land” Salgado notes, as I look up over the highest point of one of the bridge overpasses. There is a mural up there with some writing: the message reads: the land belongs to those who cultivate it with their own hands (Emiliano Zapata). I look back at her and she raises an eyebrow.  Her deliberate leaning-in tells me that there’s more where that came from.

There’s no doubt that the new president-elect of Mexico has a platform that includes implementing the necessary changes needed to end once and for all the great disparity that exists between rich and poor and that eliminating the benefits and privileges currently enjoyed by a minority of the population at the expense of the majority of Mexico’s citizens is a priority for his administration.

In the final stretch of my time spent with Salgado, I asked her if  she believes the new government will create the necessary  space and put in place compassionate and humanitarian measures to address the needs of our brothers and sisters who are migrating thorough Mexico. I especially pressed her on the issue of the growing number of Black migrants in Mexico, given the Haitian Diaspora and other migrant groups.

I ask because Guerrero, the state she is representing in the senate, is the only Mexican state named for an ex-president. Vicente Guerrero died in 1831, after he led the nation in its independence against Spain and also abolished slavery during his short term as president.

The state of Guerrero is one of the Mexican states that has a larger population of Mexican citizens who are afrodescendientes and have struggled for social and economic justice due to race-based prejudice as have the pueblos indígenas. She assured me that the new federal government and she in particular, as part of her senate platform, will not lose sight of this important issue for our Black brethren migrating through Mexico or of those who are proudly Afro-Mexicanos still fighting for their rights and fair, egalitarian treatment.

As Salgado embarks on a tremendous course of change, and given the road she is traveling, she is walking, talking, living, and breathing history as she makes it.