A new analysis published Thursday by the Journal of the American Medical Association (JAMA) concluded that excess deaths in Puerto Rico related to Hurricane María up through December 2017  was 1,139—about 18 times greater than the official death count of 64.

The latest study (co-authored by Alexis Raúl Santos, an assistant professor of human development and family studies at Penn State, and Jeffrey T. Howard of the University of Texas at San Antonio) said the following: “Based on death records following Hurricane Maria, the estimated hurricane-related mortality burden of 1,139 excess deaths through December 2017 was higher than the official death toll of 64.” 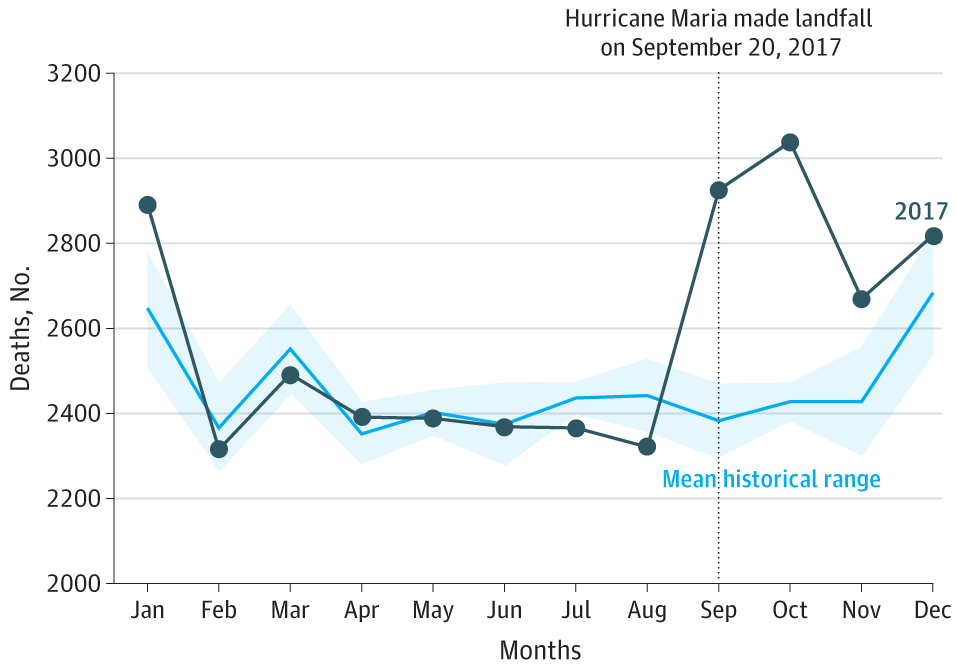 The researchers described their estimate as “conservative,” noting that it had “used the upper 95% CI [confidence interval] and did not consider the population denominators, which were decreasing.”

In a release from Penn State, Santos expressed his reasons why he continued his work on this issue. A previous study from Santos and Howard last November had estimated the death toll to be at least 10 times higher than the official death count, which was 55 at the time.

“The Caribbean is set to be hit by more weather disasters in the future, based on forecast models, and we don’t want history to repeat itself,” Santos said in the Penn State release. “If we have a better idea of the damage that Hurricane María actually did, then maybe we can use that experience to inform and reshape protocols, policies and emergency management processes.”

The JAMA analysis from Santos and Howard addressed the Harvard study and also noted the limitations of its own analysis, concluding that more work needs to be done.

“The primary limitation of the study is that the specific cause of each individual death is not known; thus only an aggregate number of deaths in excess of historical variation can be estimated,” the JAMA study said. “Another recent study suggested that there were 4645 excess deaths (95% CI, 783-8498), but it was based on a survey that underestimated prehurricane mortality, overestimated posthurricane mortality, and had a large CI, indicating a high level of uncertainty. Future studies would benefit from careful analysis of deaths from vital records rather than surveys.”

The newest Santos/Howard study comes at a time when many are anticipating the public release of study by the Milken Institute School of Public Health at George Washington University. That study, which was commissioned by the government of Puerto Rico, is expected to be released in the next two to three weeks, according to a July 26 story published by Latino Rebels.

When news of the JAMA study was made public, CBS News correspondent David Begnaud contacted the government of Puerto Rico for comment.

The Governors representative at @PRFAA just sent along this statement: “We understand that 64 is not the number of hurricane María deaths. This number has not been updated pending the release of the GW study.”

During an interview with Latino Rebels Radio in late June at the Aspen Ideas Festival, governor Ricardo Rosselló said the government has stopped working on revising its official death toll until “[GW] can can use epidemiological studies moving forward.”

At a February 22, 2017 press conference, when asked about whether the María-related death count was closer to the official count of 64 or nearer to 1,000, Dr. Lynn Goldman, dean of GW’s Milken Institute School of Public Health, said researchers would have better answers in three months, confirming the speculation that the GW report would be made public in late May.

Last November, Puerto Rico’s Center for Investigative Journalism (CPI) published its first analysis of uncounted deaths, and on December 7, using public health data, it reported than an excess of 1,000 deaths occurred in September and October of 2017, when compared to the same time period in 2016. On December 8, The New York Times published its own analysis.Earlier this past June, the CPI and CNN won a court ruling, instructing the government of Puerto Rico to provide mortality statistics and records for the months after Hurricane María.

Data from June 13 released by the island’s Registry Department estimated 1,427 excess deaths for the last four months of 2017, when compared to same months the four previous years, but the government won’t confirm whether these excess deaths were all related to the hurricane, and has kept the official death count of 64.