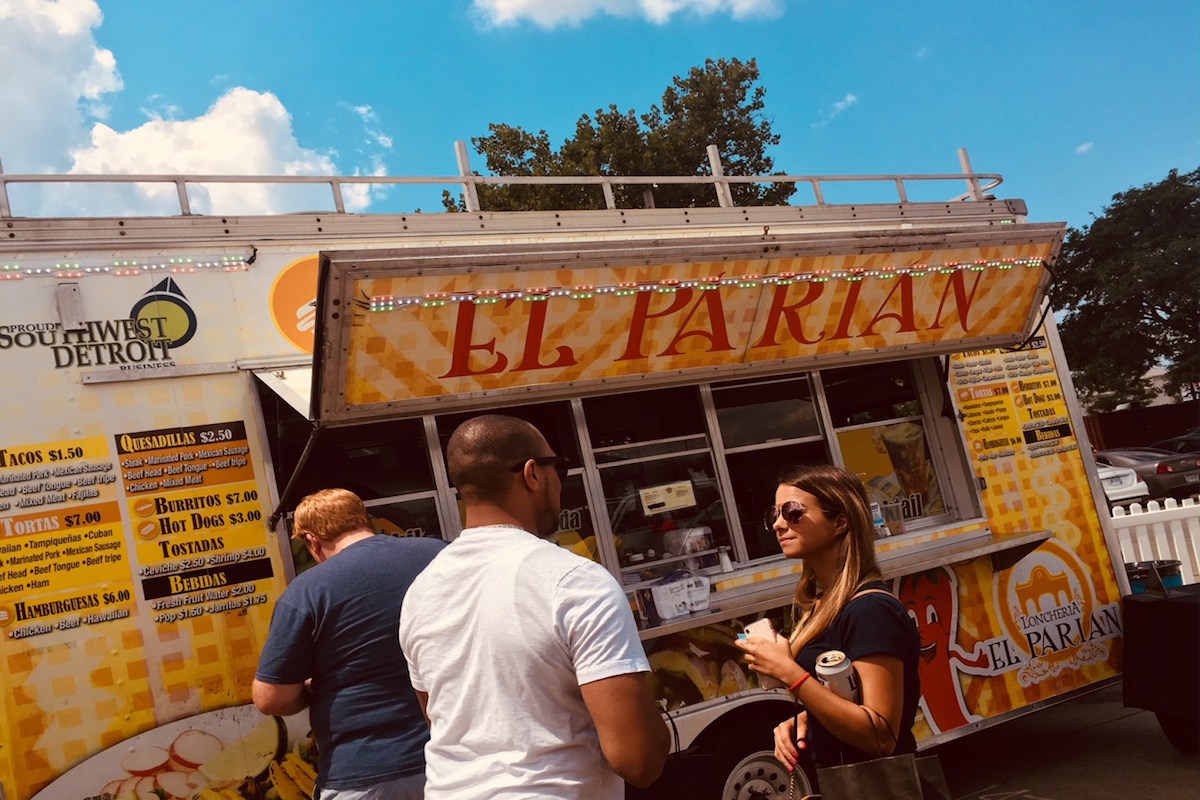 DETROIT — I couldn’t shake this nagging question in my mind the other day: Do these people know ANYTHING about Mexican food?

The setting: the inaugural Taco Showdown held late last month at Eastern Market. I was joined by a panel of three other judges to sample more than a dozen taco offerings at the contest, prepared by eateries from all over Michigan’s Lower Peninsula.

Competing, some of the most beloved taqueros in the Metro Detroit region who put forth some their best performances on display for more than 1,500 taco-crazed fans.

The winner, selected in NCAA elimination fashion, would walk away with a nifty trophy and the title of best taco in the state (or at least among the participating contestants).

But when our scores were tallied up one by one, I began to notice a disturbing pattern among my fellow judges.

I cringed when the other panelists gave high marks to unremarkable chains that churned out uninspired fusions on the classic taco, while some of the most celebrated Mexican eateries in the region were getting knocked down in points for things like “presentation” or for being “too spicy.”

When all the scores were tallied up at the end, a tie was reached between a BBQ food truck that dished out a saccharine mango and honey syrup-soaked brisket inside a flash-fried flour tortilla, and Torti Taco of Battle Creek, which served an almost perfectly executed suadero de res.

When asked to break the tie, it was the mango mess that won over the other judges.

I couldn’t stop shaking my head at what I had just witnessed. What should have been a fun afternoon of geeking out over the nuances in taco-making turned into an immense exercise of emotional labor that I’m still recovering from weeks after the competition.

Two of the judges  —an Ohio man who calls himself Mr. Taco Roetter and Susan Selasky, a food writer for the Detroit Free Press— were white. The third was Larry Spruill, an African American reporter who recently joined WDIV and a self-described foodie. I was the lone Latinx judge. And I felt like the token Mexican brought on for optics, but outnumbered nonetheless.

I’m not saying that you have to be Latin/Mexican/Hispanic/Chicanx to appreciate spicy Mexican food (note, I do not ascribe to the stereotype that all Latinxs love spicy food). But what I am saying is that it matters who gets to be at the table at these sorts of events. If one is oblivious to the basic principles involved in making al pastor, or carnitas, or lengua or Baja-style shrimp tacos, how is that person equipped to understand what they’re experiencing when they’re handed a plate?

I was further dismayed a few days after the event by a pair of articles published by the Freep. In the August 3 story, “5 taco spots to try in metro Detroit area,” she named her top picks out of the contestants. Among her favorites, Mex of Bloomfield Hills for its “garlic aioli”-garnished braised pork taco, Allen Park newcomer Catrina’s Taqueria for its tacos al pastor and the liquid queso-drenched steak fajita tacos out of Wella’s Kitchen food truck in Saginaw.

Glaringly absent from the slapdash list, any Detroit presence whatsoever, even though the Motor City is home to the largest Mexican population in Michigan. Nor was there any real narrative about the time-honored recipes that these taqueros brought to the competition.

This sort of writing might have been acceptable when food journalism was still considered fluff written by white reporters or critics for the enjoyment of wealthy, mostly white readers accustomed white tablecloth fine dining and comfortable labeling tacos as ordinary street food.

But food writing has evolved to give readers a glimpse into other cultures and traditions, it’s become the tie that binds us as a society, a lens from which we can communicate our shared histories. This summer, we’ve mourned the deaths of Anthony Bourdain and Jonathan Gold, two of the most celebrated food writers and cultural commentators of our time. They weren’t so highly regarded for their stealthy appetites, but rather for their abilities to make these crucial connections into our humanity, using food as a vehicle for understanding.

Back in June, Detroit’s Allied Media Conference unveiled its inaugural Dream Cafe, which invited diners to imagine a more just foodways. But it wasn’t just about sustainable sourcing or fair wages. In talking to the AMC’s executive director Jenny Lee at the time, she said the days-long popup —which attracted chefs, media-makers and urban farmers from Detroit and beyond— was another means of preventing erasure. Whether it be through creating a dialogue about the occupation of Palestine over a plate of labneh and ful medamas or how hummingbird cake can lead to a conversation about African diaspora in the Americas, she and others proved that the event could serve as a key for our cultures’ survival.

So, just what is communicated if the paper of record fails to acknowledge these tenets of modern food journalism?

What it does is it dehumanizes the people behind many of the food traditions that have been passed down through centuries.

Over the weekend, for example, Food & Wine felt compelled in a tweet to give the quintessentially Mexican concha a Eurocentric description, likening pan dulce to a brioche roll. Readers all over the country panned the mainstream outlet for choosing to de-Mexify such a staple in panaderias everywhere.

Dear Food & Wine, the bread is called a concha or pan de huevo, not a sweet brioche-like roll. It matters who is telling stories about food. Journalists of color apply for this paid food reporting fellowship: https://t.co/EP5K1Fu1ju @Cande313 @Fi2W @TostadaMagazine @wdet pic.twitter.com/BKxthvz4SW

Similarly, the Freep’s lack of applying basic cultural literacy in its roundup only amplifies mainstream outlets’ tendency to disassociate the food from the people who make it as the piece omitted the many delicious nuggets of taco wisdom imparted by the Showdown contestants.

Absent from the listicle or the accompanying news item that announced the Showdown’s winner, was any mention of the painstaking preparation involved in the making of several iconic Mexican recipes on display that day.

Torti Taco’s suadero de res recipe, for example, involves the oh-so smooth in texture cut of beef found between the belly and leg and calls for hours of stewing in manteca. This slow cooking is followed by frying the protein, resulting in a slightly crisp caramelization. There’s really no need to dress it up much with other sauces, queso or veggies. The star is the juicy, fatty meat itself.

Nor was there much said about the tacos campechano served by Alvaro Padilla of Taqueria El Nacimiento. Campechano refers to the Mexican tradition of improvisation by throwing together leftover ingredients to create something new and delicious. Padilla’s delectable medley of chorizo and carne asada won the Southwest Detroit restaurant the people’s choice award.

Receiving no mention at all in print were the tacos al pastor from El Parian, by far the most popular taco trucks in Southwest Detroit.

Al pastor is a generations-old tradition in Mexican cookery that dates back to the early 1900s when Lebanese immigrants brought their shawarma-making technique to the Latin American country. The proper al pastor taco calls for just the right balance of chili marinade that’s counteracted with sweet and acidic pineapple. The meat is slow cooked on a spit until a harmonious blend of all the flavors involved is reached.

One wouldn’t have gathered any of that in the Freep’s write-up, nor at the competition. In fact, the only response among my fellow judges when they sampled El Parian’s offering, “it’s too hot.”

But more than flavor profiles and technique, eateries like Torti Taco, El Nacimiento and El Parian are manifestations of generations of mass migration between Mexico and the United States, a result of the industrialization of our southern neighbor and displacement of hundreds of thousands of campesinos.

Not only are these dishes among the most popular styles of tacos in all of Mexico, they are representations of how Mexicanos continue to redefine our culinary landscape.

Meanwhile, the Freep chose a reductive listicle style of writing that lacked any sort of context or critical analysis. And as for the contest itself, had the subject been, say, barbecue or wine instead of tacos, I have no doubt that the same careless criticisms would not have been applied.

By all accounts, Taco Showdown food and booze vendors made a killing in sales, as evidenced by the lines that stretched the length of Shed 5 that day. After all, any event with the word taco is bound to attract boatloads of attendees and mean a potential economic boon for the loncheras and restaurants slinging their comida.

Where the event fell short was on the judging side and that consequently impacted how the narrative was shaped.

Immediately after turning in all my scores, I turned to Scott Rutterbush, organizer of the event and founder of the Dine Drink Detroit restaurant week and other food-related contests, and urged him to make efforts next year so that I wouldn’t be the lone Latinx voice of reason on the panel.

I also spoke up about the flabbergasting tie-breaker, asking him to get this year’s judges to reconsider their votes.

At the end of the day, Torti Taco walked away the victors.

But not without a fight.

This article was made possible by the Detroit Journalism Engagement Fund, a project of the Community Foundation for Southeast Michigan, that’s working to increase quality journalism and help better inform communities.

Tostada Magazine is journalism that speaks to the rich culture of Metro Detroit’s food scene. We seek to shift the focus of food writing in the Detroit area by bringing the voices of our communities to the forefront of the conversation. Serena Maria Daniels is the co-founder and head chingona of Tostada Magazine. She is an award-winning journalist based in Detroit and specializes on the intersection of food, identity, and culture.