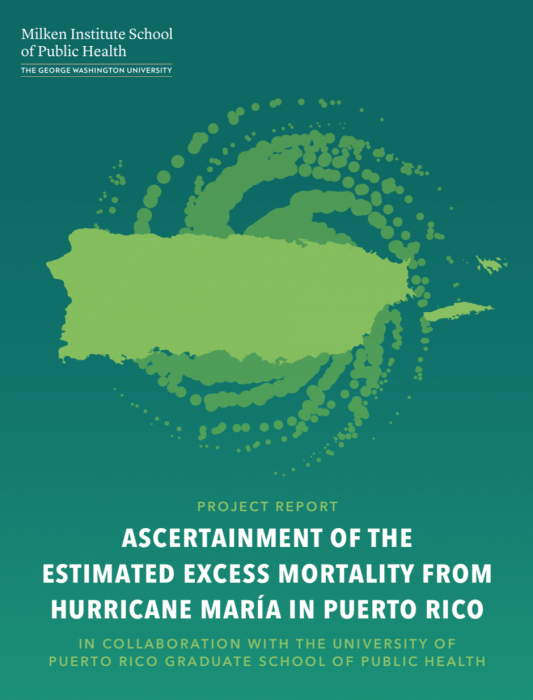 Here is the report’s Executive Summary:

We estimate that in mid-September 2017 there were 3,327,917 inhabitants and in mid-February 2018 there were 3,048,173 inhabitants of Puerto Rico, representing a population reduction by approximately 8%. We factored this into the migration “displacement scenario” and compared it with a “census scenario,” which assumed no displacement from migration in the hurricane’s aftermath. We found that, historically, mortality slowly decreased until August 2017, and that rates increased for the period of September 2017 through February 2018, with the most dramatic increase shown in the displacement scenario accounting for post-hurricane migration.

The results of our analysis of total excess mortality by socio-demographic subgroups show that every social stratum and age group was affected by excess mortality. However, the impact differed by age and socioeconomic status. The risk of death was 45% higher and persistent until the end of the study period for populations living in low socioeconomic development municipalities, and older males (65+) experienced continuous elevated risk of death through February. Overall, we estimate that 40%

of municipalities experienced significantly higher mortality in the study period than in the comparable period of the previous two years.

We conclude that excess mortality is a good indicator for impact monitoring during and in the aftermath of a disaster.

Our study shows that physician lack of awareness of appropriate death certification practices after a natural disaster and the Government of Puerto Rico’s lack of communication about death certificate reporting prior to the 2017 hurricane season limited the count of deaths that were reported as related to Hurricane María. Individuals authorized to complete death certificates include physicians and forensic physicians; however, most physicians receive no formal training in death certificate completion, in particular in a disaster. When asked about the CDC guidelines the PRVSR circulated after the hurricane that recommended physicians fill out a section in the death certificate with information or other conditions that contributed to the death, interview respondents indicated lingering confusion about the guidelines, while others expressed reluctance to relate deaths to hurricanes due to concern about the subjectivity of this determination and about liability.

The PRVSR offices sustained damage and did not have power to operate for some time after the hurricane, and death registration was delayed. Nevertheless, based on our findings in the assessment of death certification quality, the disaster does not appear to have affected the completeness of the certificates. For this assessment we compared Puerto Rico Vital Statistics System (PRVSS) data from September to December 2017 with the same period in 2015 and 2016 and found that completeness of death certificates was high with respect to age and sex, two indicators widely used to assess this aspect of mortality registration quality. On timeliness, there was a statistically significant delay in the number of days between date of death and date of death registration, with an average of 17 days in the period after the hurricane compared to 12 days in the prior year. Overall, there was a low percentage of garbage codes as the underlying cause of death and there appears to be no impact from the event on the percentage of codes that were mis-assigned. With respect to internal consistency, less than 1% of death certificates had medically inconsistent diagnoses in the underlying cause of death.

Assessment of Crisis and Mortality Communications and the Information Environment

According to interviews with Puerto Rico Government agency personnel, at the time of the hurricane, neither the Department of Public Safety (DPS) nor the Central Communications Office in the Governor’s Office had written crisis and emergency risk communication plans in place. The DoH’s Office of Emergency Preparedness and Response had an outdated emergency plan, including annexes for Risk Communication in Emergencies and Mass Fatality Management. Agency emergency plans that were in place were not designed for greater than Category 1 hurricanes, and risk messages conveyed to the public in preparedness campaigns were reported by key leaders to inadequately prepare communities for a catastrophic disaster. Key leader interview respondents also noted limited engagement of community stakeholders in strategic communication preparedness planning. Regardless, key leader interview participants described numerous strategic preparedness activities undertaken at the local level that they believed to minimize injuries and loss of life, especially for vulnerable populations.

According to Puerto Rico Government agency interviews, there were insufficient communication personnel at the time of the hurricane, and surge staffing was not adequately mobilized post-hurricane. Respondents reported a lack of formalized personnel structure for emergency communication functions, resulting in inadequate personnel and spokespeople training in crisis and emergency

risk communication, deficiencies in coordination of communication between central and municipal governments and between central and federal government counterparts. Puerto Rico Government agency leadership interview respondents did not identify formalized protocols for the coordination and clearance of mortality reporting between the DPS and the DoH at the time of the hurricane.

By the way, the official death toll from the government of Puerto Rico was 64 before this study came out.

You can read and download the entire report below: