Hours after Frances Robles of The New York Times reported on Thursday that the government of Puerto Rico has “quietly acknowledged” in a draft online document to Congress that deaths related to Hurricane María will likely be more than 1,400 people instead of the official death count of 64, a government spokesperson told Latino Rebels that the much-anticipated study by George Washington University to confirm a final and official hurricane-related death count will be released to the public the last week of August.

“The official number will be updated once the GW study is out. That will be out the last week of August,” Pedro Cerame, a spokesperson for the Puerto Rico’s Federal Affairs Administration, said.

Cerame also noted that the current information included in the draft report to Congress is “not the official number” and is “a government estimate.”

in a draft of a report to Congress requesting $139 billion in recovery funds, scheduled for official release on Thursday, the Puerto Rican government admits that 1,427 more people died in the last four months of 2017 compared with the same time frame in the previous year. The figures came from death registry statistics that were released in June, but which were never publicly acknowledged by officials on the island.

According to Robles’ story, Cerame did acknowledge that “this is a realistic estimate.”

“We don’t want to say it out loud or publicize it as an official number,” Cerame told the Times. “The official number will come, and it could be close. But until we see the study, and have the accuracy, we won’t be able to recognize the number as official.” The Times that reported the GW study would come out this month, but did not specify when.

The draft report to Congress included the following information on page 28:

Page 30 of the draft report said this:

Although the official death count from the Puerto Rico Department of Public Safety was initially 64, the toll appears to be much higher. On June 13, the Government of Puerto Rico revealed that there were 1,427 more deaths in the four months after the hurricanes than normal (based on the previous four years), and it will update the official count after a George Washington University study is completed. Similarly, independent researchers analyzing vital statistics data found that about 1,000 more people died in September and October 2017 than normal, largely in the hurricane’s path or in mountainous rural areas. A much-publicized Harvard study estimated hurricane deaths likely ranged from about 800 to 8,500 due to indirect causes, such as delayed or interrupted health care.

However, in the Times story published on Thursday morning, Robles reported the following about the final version being sent to Congress: “Mr. Cerame acknowledged that the final version of the report hedges the language to say that the additional deaths ‘may or may not be attributable’ to the storm; the 1,427 figure was also deleted from a chart.”

CBS News’ David Begnaud tweeted out a screen grab of the new language included in the final report to Congress:

Here’s what the final report says (the wording is changed/hedged considerably pic.twitter.com/XhU35IrEoW

During a June 28 interview with Latino Rebels Radio at the Aspen Ideas Festival, Puerto Rico governor Ricardo Rosselló said that his administration would not change the official death toll until the GW study is completed.

“There certainly have been excess deaths,” Rosselló said at the time. “We need to get the full picture on why they occurred and how we can prevent them in the future. I think that is a critical component, of course, why they occurred. To give closure and to give clarity to the people of Puerto Rico to me is very important, but also to honor their memories. It is important that on a future event, we learn from this one and that we can execute a lot better. So certainly, I mean, from November on, we knew that it wasn’t sixty-four [deaths]. That was just the number based on the protocol. That shouldn’t be considered the official tally. We stopped the tally and then we externalized it to George Washington [University] so that they can use epidemiological studies moving forward. Certainly, an area that we need to have a lot more clarity on, and that we’ll be better off for it, once a lot of the information from the experts starts piling in.”

On July 26, the government of Puerto Rico said it expected the GW study to “come out in the next two to three weeks.” That has now been pushed to the end of August, based on what Cerame told Latino Rebels on Thursday. Requests for comment from GW’s Milken Institute School of Public Health, commissioned by the Rosselló administration to conduct the death count study, continue to go unanswered.

At a February 22 press conference, when asked about whether the María-related death count was closer to the official count of 64 or nearer to 1,000, Dr. Lynn Goldman, the dean of GW’s Milken Institute School of Public Health, said researchers would have better answers in three months, confirming the speculation that the GW report would have been made public in late May.

An August 2 study from researchers concluded that excess deaths in Puerto Rico related to Hurricane María up through December 2017 was 1,139—about 18 times greater than the official death count of 64. 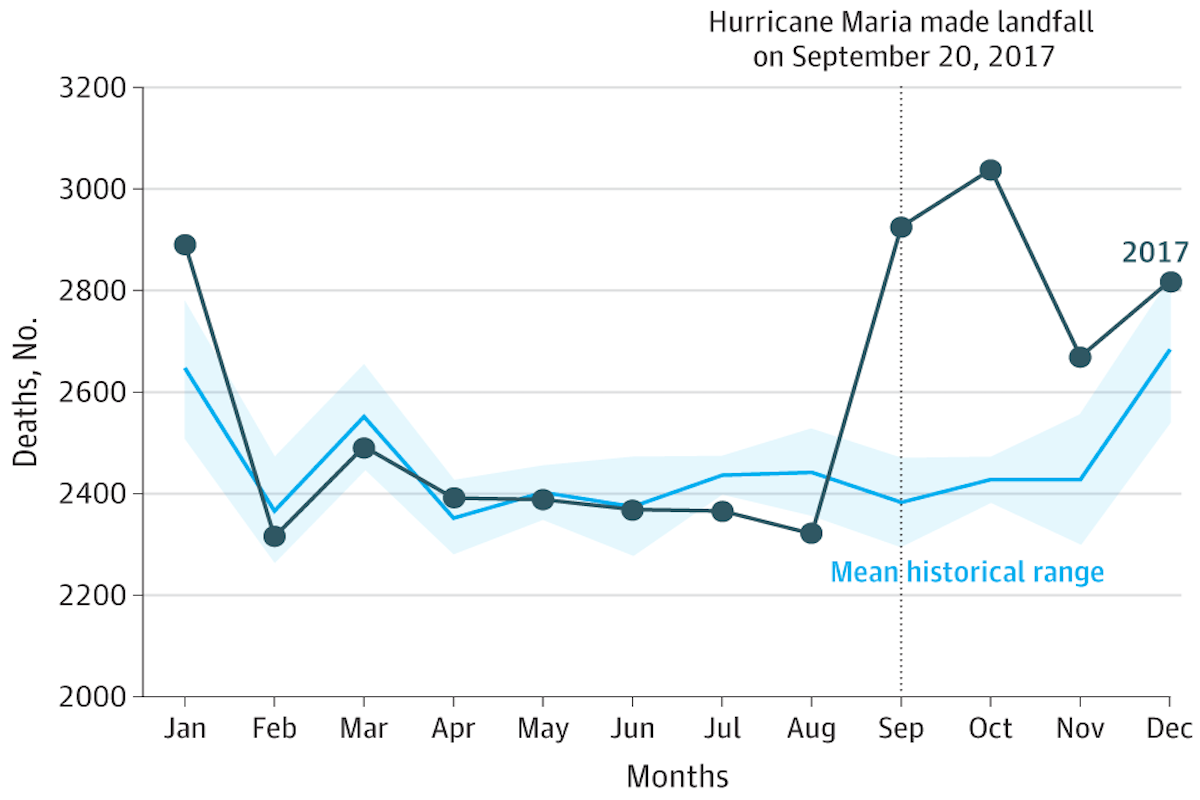 From the August 2 study co-authored by Alexis Raúl Santos, an assistant professor of human development and family studies at Penn State, and Jeffrey T. Howard of the University of Texas at San Antonio, published by the Journal of the American Medical Association (JAMA)

Last November, Puerto Rico’s Center for Investigative Journalism (CPI) published its first analysis of uncounted deaths, and on December 7, using public health data, it reported than an excess of 1,000 deaths occurred in September and October of 2017, when compared to the same time period in 2016. On December 8, The New York Times published its own analysis and estimated 1,052 hurricane-related deaths. Earlier this past June, the CPI and CNN won a court ruling, instructing the government of Puerto Rico to provide mortality statistics and records for the months after Hurricane María.

Data from June 13 released by the island’s Registry Department estimated 1,427 excess deaths for the last four months of 2017, when compared to same months the four previous years, but the government would’t confirm at the time whether these excess deaths were all related to the hurricane.

The full draft report to Congress from the government of Puerto Rico is below:

This is the final report to Congress:

UPDATE, the government of Puerto Rico released a Thursday statement by Héctor Pesquera, secretary of the Department of Public Safety, at 1:01pmET:

(August 9, 2018 – San Juan) “On February 9, the Bipartisan Budget Act of 2019 was approved by Congress. In section 21210, it was required to the Government of Puerto Rico to submit a 180-day recovery plan. This report, which was sent to Members of Congress yesterday, highlights the vision to transform Puerto Rico within the next 10 years. It includes an analysis of the aftermath of the Hurricane in which the mortality data was included.

Directly after Hurricane Maria, we used CDC methodology to assess the death toll in Puerto Rico to be 64. We always anticipated that this number would increase as more official studies were conducted. On January 4th, 2018, Governor Rosselló ordered an investigation, because CDC guidelines proved insufficient to account for mortality in the worst natural disaster Puerto Rico has ever seen.

In February, we announced that we would commission an independent epidemiologic study by the Milken Institute of Public Health, George Washington University, because we wanted an independent report to be conducted by professional epidemiologists.

On June 1, the Puerto Rico Demographic Registry released data to the media which indicated there was an excess of 1,400 deaths in the four months following Hurricane María. That number was not the result of an independent study—it is simple math. This is not the official number of deaths attributable to Hurricane María.

We are anticipating the official results from the George Washington University study in the coming weeks. Once the study is released, the Government of Puerto Rico will update the official number. We owe it to the people of Puerto Rico to have a precise number, along with the data we need to make better preparations for future disaster situations. With this information, we can understand what procedures need to be in place in Puerto Rico to prevent such a high loss of life from ever happening again.”