Give Thanks and Remember Your Cousins 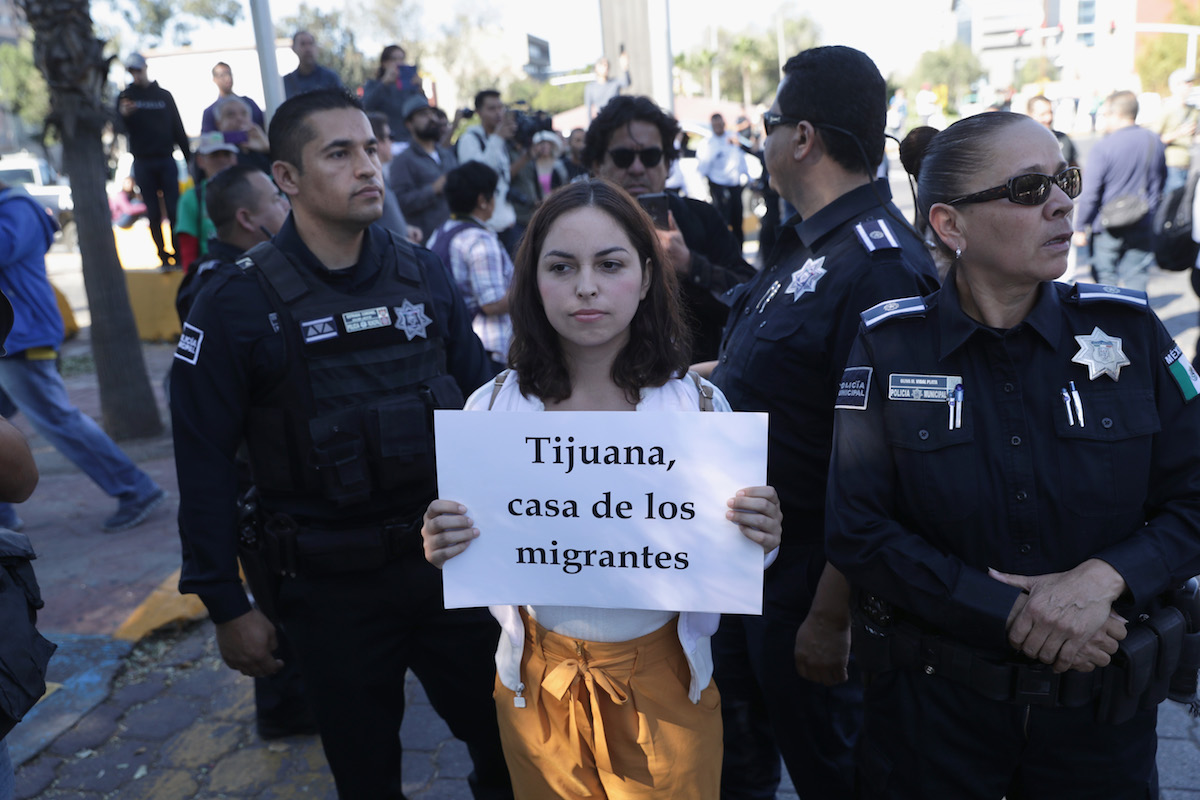 SAN DIEGO/TIJUANA — This year, Tijuana and San Diego have been celebrating long holiday weekends on both ends of the week, on both sides of the border. Unfortunately, with militarization comes noisy helicopters overhead and rowdy hate groups on the ground that attacked migrants in the Central American caravan. In addition, Tijuana mayor Juan Manuel Gastélum’s hate words have only served to distract from the region’s cultural events.

On the Mexican side, last Sunday —the same day an angry mob marched against the caravan— was the beginning of the Veinte de Noviembre Monday holiday that celebrated the Mexican Revolution. The important national moment is when Mexicans remember the 1910 start of the armed conflict that ended the Porfirio Diaz fascist regime. This national day was way more meaningful for the 1.3 million residents of Tijuana (most of whom have welcomed the caravan) than the small group who perpetrated the hate acts of last Sunday. Many of those present on Sunday were instigators from the U .S.—Minutemen provocateurs from far right-wing groups motivated by hate, reflecting the worst of the American spirit.

On the U.S. side this week, workers plugged away at work, aware of what was happening in Tijuana and knowing that the All-American holiday of Thanksgiving will have them seeking out either fresh or canned cranberry sauce because the illusion of an All-American table with relatives is the ultimate goal for those so fortunate to have the day off and the family and loved ones to enjoy it with.

But in the context of San Diego and Tijuana, one of many Thanksgiving traditions may be to reject a traditional Thanksgiving and instead remember a Kumeyaay legend from the original people of the region. The Kumeyaay people are rarely spoken of outside of our homes here. However, they can be traced to these lands going back 12,000 years. They are our local indigenous tribes whose language, traditions and lands have greatly been attacked and heretofore divided and pillaged by all who ever came to governance in these lands, including the Spanish, the Mexicans and the Americans. Playas de Tijuana and all coastal lands were taken by military force from the Kumeyaay by the Spanish military in 1822. The U.S. government, California and militias were all also responsible for further decimating the lives of the Kumeyaay tribes. There were 150,000 Kumeyaay in 1845 and only 16,000 by 1900.

Forget the cranberry sauce.  Shawee, a traditional Kumeyaay acorn mush is a must for the table if you can go out and harvest your own acorns. Grind them in your stone metate y mano.

The historical claim to the lands invaded in the Tijuana and San Diego region are the Kumeyaay’s historical plight. They were the first people we know of locally whose babies, women and elders were separated by an inhumane policy we now know ICE uses shamelessly on our families (forced separation). The indigenous peoples of the Kumeyaay tribes and their cousins, the tribes of the many pueblos indígenas throughout the Americas, are the descendants of ongoing struggles against colonization, displacement and exodus due to factors that have served the greed of multinational corporations. That is why it is so ironic that the protest by the right-wing hate groups of a small group of tijuananenses led by a self-proclaimed conservative mayor and his neoliberal followers (many espousing a platform of rejection and fascism this past Sunday) was held under the statue of Cuauhtémoc, the last Aztec king. Let us remember: it is well documented that Cuauhtémoc died from smallpox brought by European invaders, not from a cold transported by an indigenous cousin of another tribe to the south. 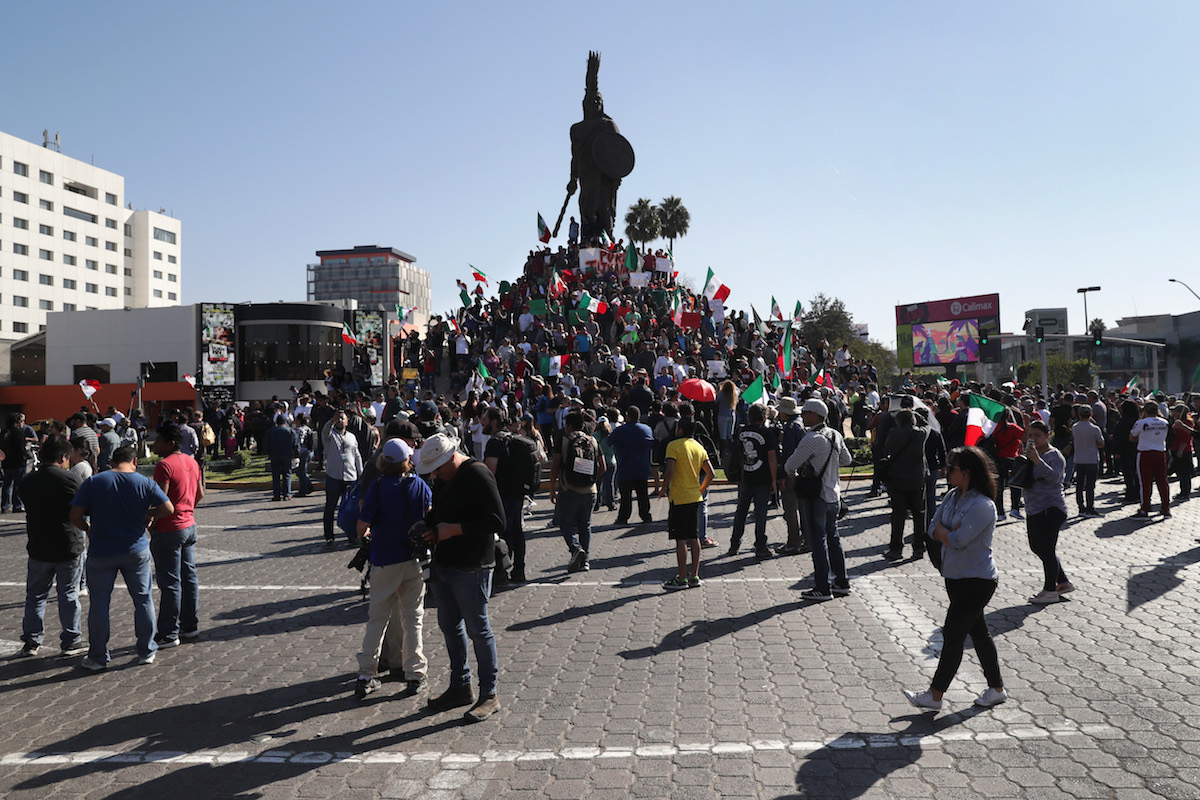 Anti-immigrant protesters stage a demonstration under a statue of Cuauhtémoc. (Photo by John Moore/Getty Images)

The mayor of Tijuana has dealt with insecurity problems and disrespect from corporations who commit crimes in Tijuana, including transnational companies that commit very serious workers rights violations within the city limits, violations against women and children, and Americans who freeload off of the local economy without paying taxes, destroying sensitive environments and all kinds of other abuses. However, he and his small group of followers have chosen to attack only “our cousins” from the south, people who are unable to defend themselves at this time given their circumstances and the threats from the U.S. military. The bottleneck on asylum claim processing gives them nowhere to go. The fact that the mayor’s little group persecuted the caravan members on the day before the observed holiday of the Mexican Revolution —when Mexicans were to celebrate a peasant’s uprising against elite fascists which led to social justice reforms— is what I find most ironic.

My former colleague, well-respected author and historian Justin Ackers Chacón is a professor of Chicana and Chicano Studies at San Diego City College. He is the author of No One Is Illegal: Fighting Racism and State Violence on the U.S. Mexico Border. He has written extensively about the Mexican Revolution and the clashes that happened before the conflict in his new book Radicals in the Barrio: Magonistas, Socialists, Wobblies and Communists in the American Working Class.

Ackers Chacón fittingly addresses the pre-Mexican Revolution setting which I believe mirrors what has been boiling over in Tijuana under a subsection in the new book titled “Empire and Racism.” Why did protesters in Tijuana try to kick out the Central American caravan? Consider this from Ackers Chacón:

“As an extension of class relations in the United States, racism was instrumental in the functioning of US imperialism in Mexico. U.S. intervention into Mexico evoked a racist paternalism in the discourse of the investor class, national political circles and in the media, contextualizing the plunder of economically subjugated people as a civilizing mission on behalf of self proclaimed superior people. As an antecedent of the contemporary notion of ‘humanitarian military intervention’ disruptive foreign investment, military invasion and occupation, and the imposition of colonial-like relationships became couched in such language as to reaffirm nationalistic and chauvinistic sentiment among the general populace.”

The neoliberal projects that have hurt so many in Latin America and in particular, Mexico, are getting a shakeup. Remember, Mexico is undergoing a transformation. The leftist MORENA party is the winner of the national 2018 elections. The mayor of Tijuana’s conservative party is looking to Donald Trump and his cronies for the kinds of interventionist disaster operations that have caused so many problems in other places where people have made democratic choices against the transnational corporations and their abuses on the people.

The members of the Central American caravan in exodus are victims of a government structure and upheaval in Honduras that failed to respect a democratic process in their homeland and the fierce backlash of U.S.-backed policies. Hondurans, “our cousins” in exodus from the south, are an output of a failing desperate capitalist policy, climate change disasters and unabated violence. The rejection of their very right to exist and an Orwellian spooking of the American public to militarize the border and shift the political ideology of our border community psyche towards fascism is the product of the continued neoliberal project. The mayor of Tijuana has become a marionette of that movement complete with a red hat like Donald Trump’s army of reactionaries. 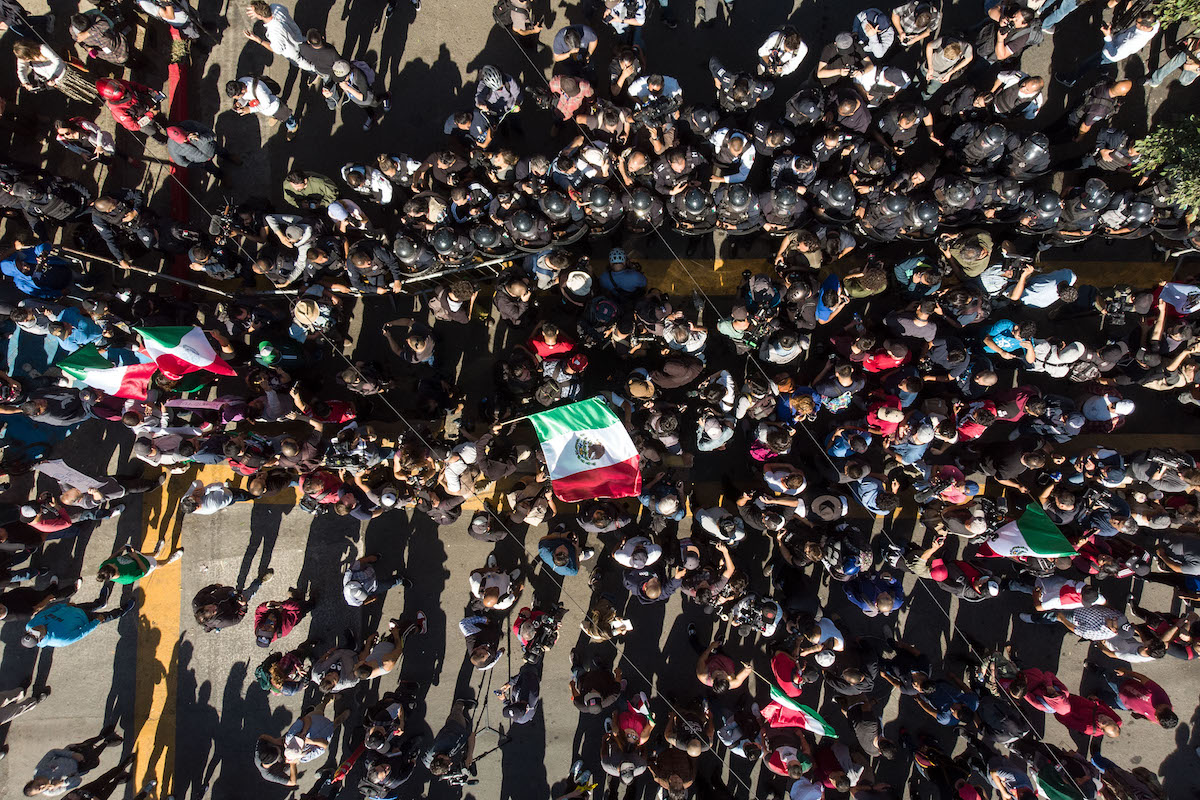 Aerial view of people demonstrating against the Central American migrants moving towards the United States and passing and staying in Tijuana. (Photo by Guillermo Arias/AFP/Getty Images)

As with the uprisings of peasants that led to the Mexican Revolution, Mexico is undergoing a shift anew. The Mexican people have already called for reforms, and the new revolution happened this time at the ballot box, which differs greatly from how Mexicans have addressed U.S. transnational corporations’ foothold and the abuses that have led to a prioritization of investor interests and Wall Street prioritization over the common goods and the social net.  As Ackers Chacón writes:

“The Porfirian alliance broke down by the first decade of the twentieth century cracked by the rise of class struggle as capitalists crisis and pent up opposition to existing arrangements came out into the open.”

And this as well:

“From these fundamental historical events would evolve transnational, anti capitalist and revolutionary organization with working-class orientation by 1908. Including the celebrated calls for land redistribution first espoused  by ‘Magonistas’ followers of Magon, followed by radical agrarian campaigns led by Emiliano Zapata in Morelos and Francisco “Pancho” Villa in Chihuahua.”

Undoubtedly, what the mayor of Tijuana has done is caustic and dangerous. It is embarrassing and we are all ashamed. However, he and his group of anti-immigrant protestors are actually not representative of the masses of Mexicans who want reforms. It is important to understand that change is needed and already voted in at a national level and underway.

That same scenario can help explain why a man at 1600 Pennsylvania Avenue has been so perverse since November 6. The House of Representatives is going to look very different soon. Reforms are on the way.

Let us pause and breathe and remember our cousins in the caravan. They will be spending the night in fear of vigilantes and those who will look to persecute them as they continue to stream into Tijuana, regarding them in derisive terms simply because of who they are. We know the truth though. Our cousins are victims of a failing system that prioritizes profits over people. We must love and protect them and give thanks that we have the opportunity to stand in this moment in time, and say that we will never tolerate human rights violations on our watch.

Let us send our cousins our light and our love.