People of Faith Unite in Civil Disobedience With Migrant Caravan 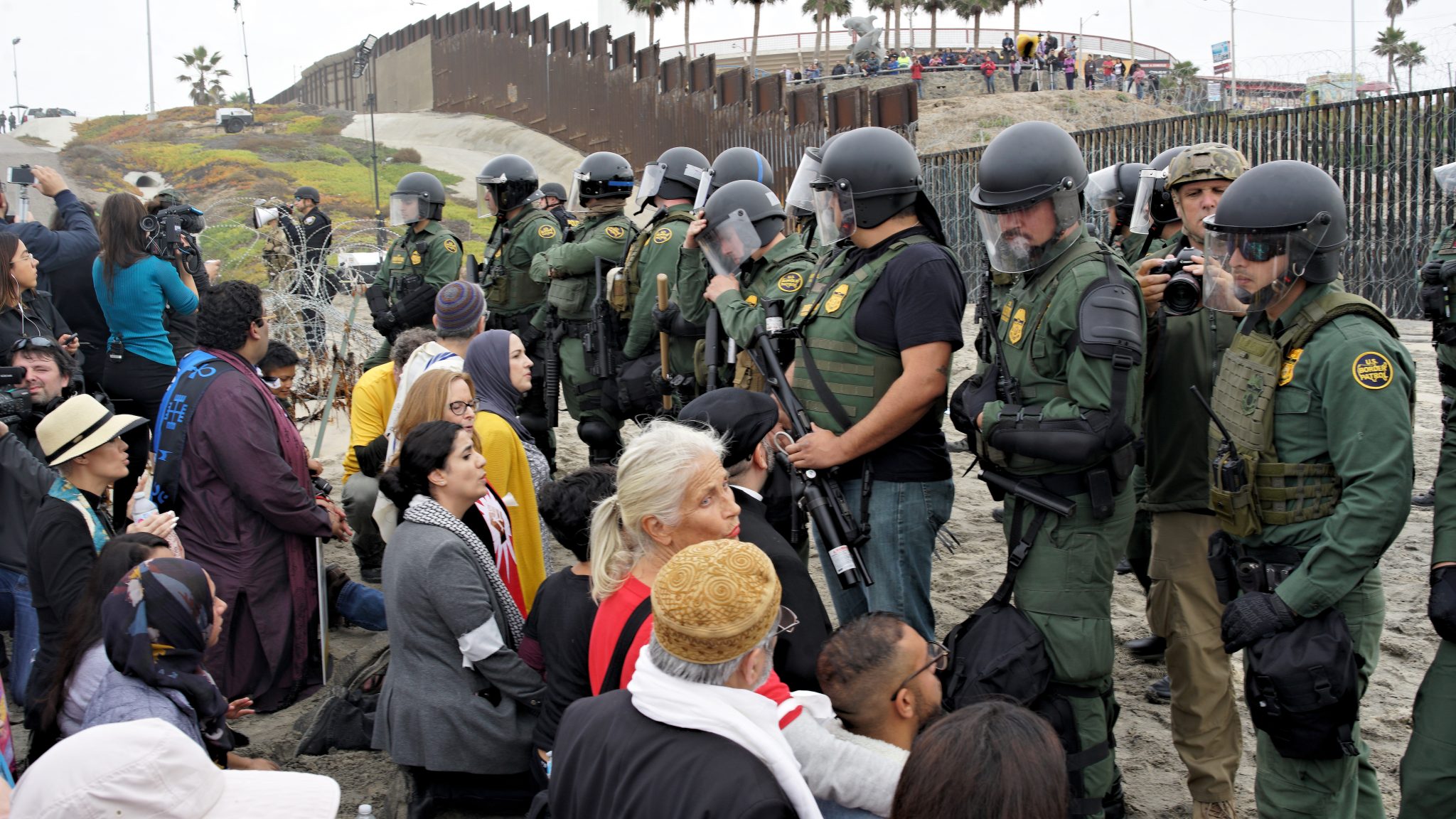 SAN DIEGO — Dozens of Catholics, Jews, Muslims, indigenous spiritual guides, Unitarian Universalists and Buddhists, among others, were arrested a few feet from the border wall Monday, where the state of California merges with Mexico and the Pacific Ocean. They were protesting in an action of civil disobedience in solidarity with migrants from the caravan.

The demonstration took place at Border Field State Park, the same location where President Donald Trump’s Operation Faithful Patriot unfolded, using an unprecedented amount of resources in an attempt to restrain thousands of Central American migrants, who arrived in Mexico fleeing misery and violence and had tried to cross the border to surrender to federal agents in search of asylum.

The people of faith, carrying banners and blankets that declared “love has no borders,” were detained just feet from the border wall, which is now covered with concertina wire. The action took place in close proximity to the 1,600 soldiers deployed alongside armored vehicles, part of an arsenal that President Trump has deemed appropriate for containing what he refers to as an “invasion.” 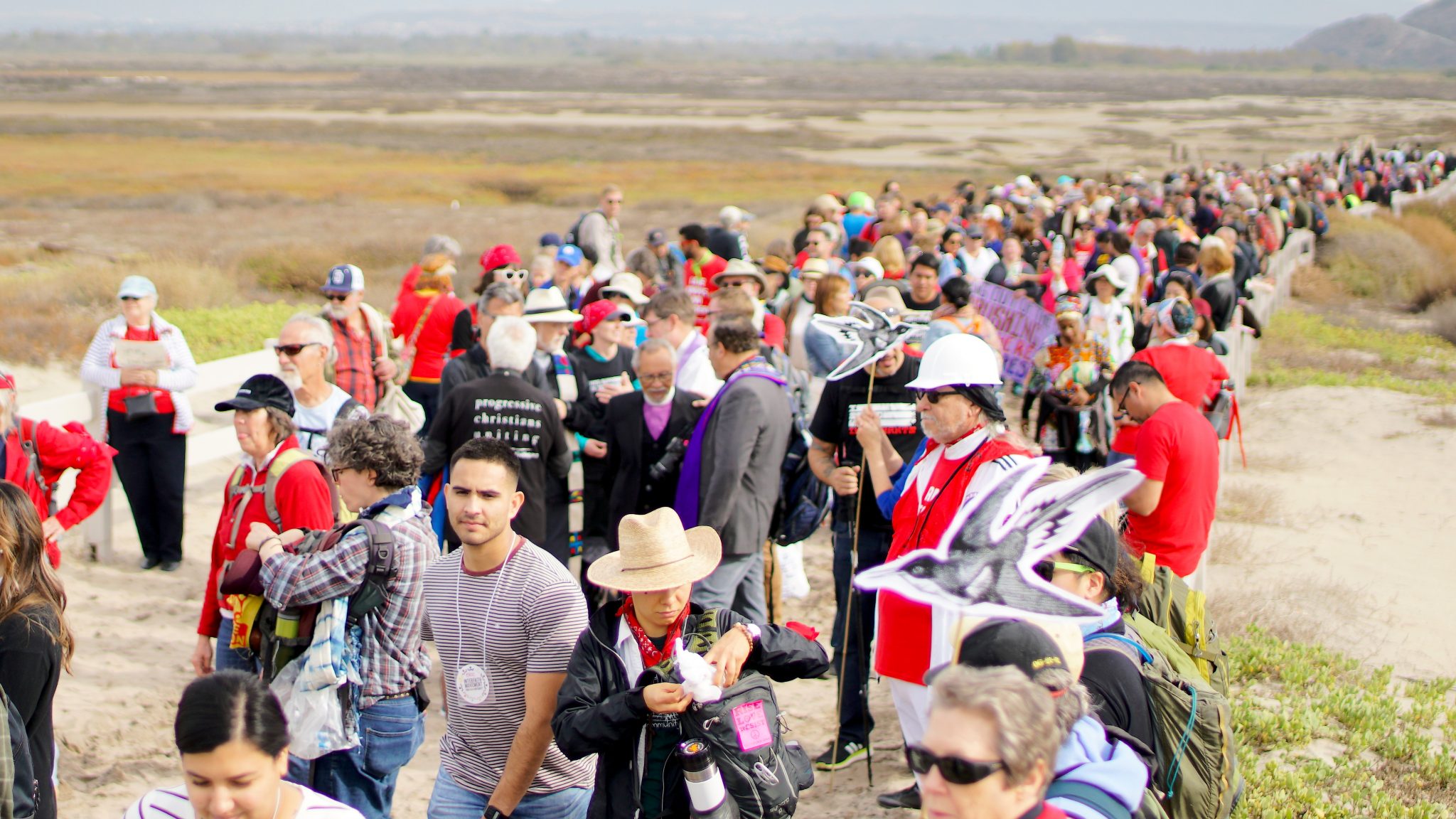 Those arrested formed part of a 400-parishioner contingent that had come from around the United States to join in the peaceful protest.

They marched in procession along a mud-covered road on the California border wearing religious attire, and then silently crossed the sand of the beach for more than a mile, until they encountered the deployment of border patrol agents equipped with riot uniforms and both lethal and non-lethal weapons. 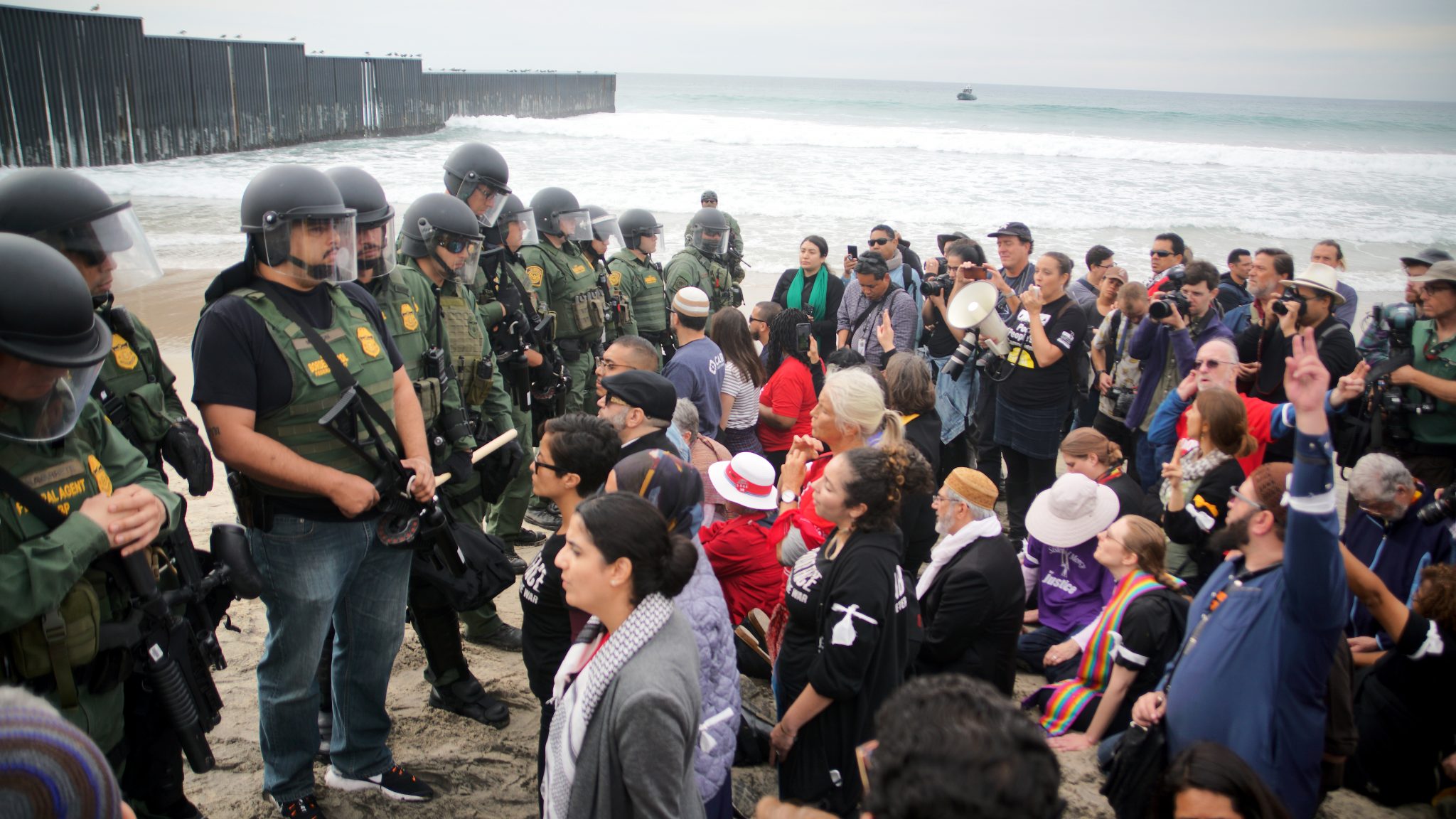 While the first group thrust themselves in front of the agents, the rest of the contingent waited at a distance, cheering them on with song.

Twice, the Border Patrol pushed back with their weapons, forcing the parishioners to retreat. On the second occasion, some demonstrators disobeyed and sat down on the sand. The agents initially arrested four people, who were released moments later with the verbal warning, noting that if they were detained again, they’d be handed over to the bailiff.

A little while later, after a third warning to retreat, the Border Patrol arrested at least 26 people who were sitting on the sand in peaceful resistance, disobeying orders.

The detainees never invaded a security zone established by the officers. Instead, the Border Patrol arrests were due to the fact that the parishioners refused to move away from that area. 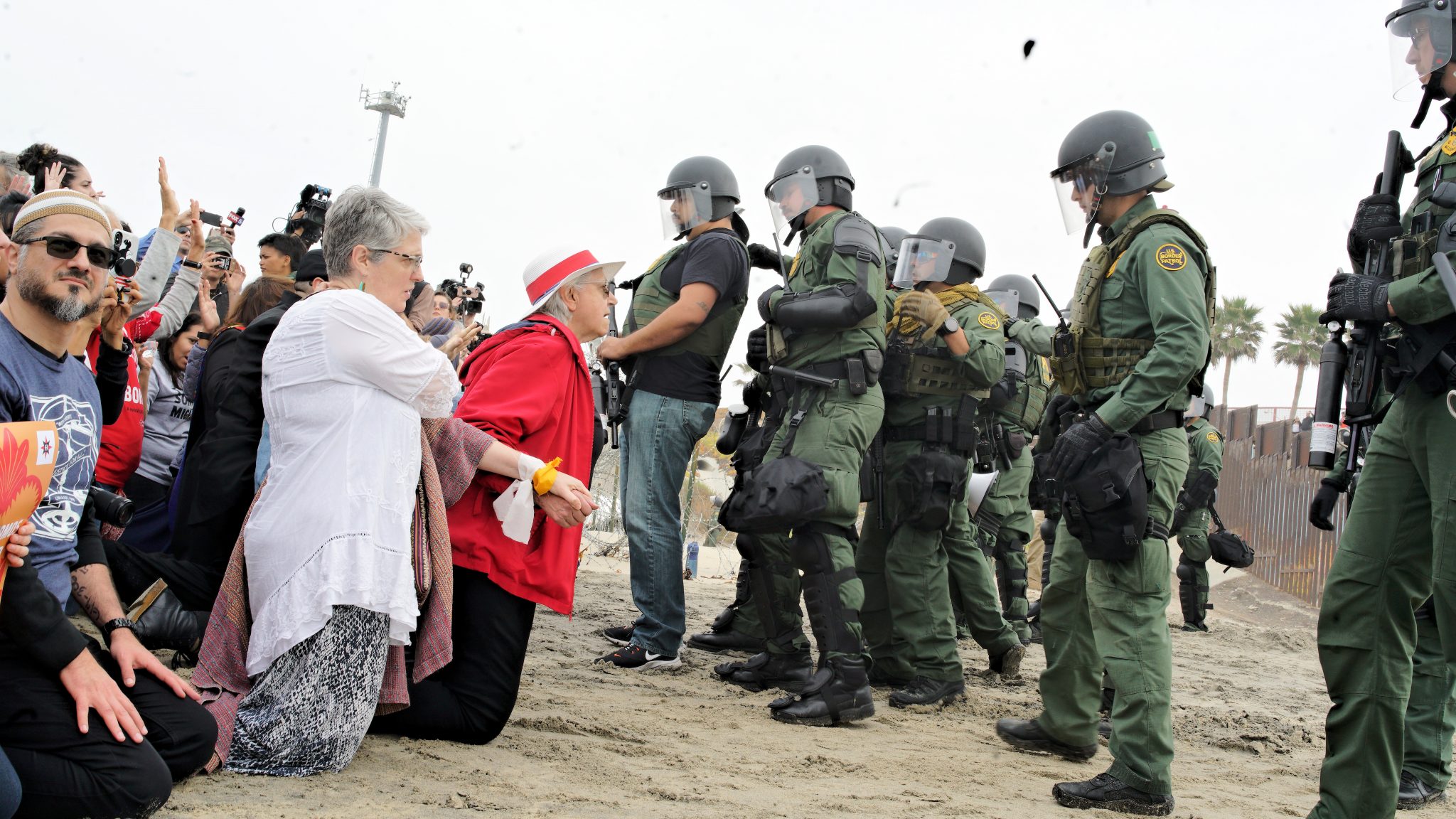 Parishioners used International Day of Human Rights to demand that the American government grant and streamline asylum hearings for migrants stranded in Tijuana.

The American Friends Services Committee (AFSC), a national religious organization that organized the protest, reported that this act of civil disobedience is part of a nationwide campaign that will continue until December 18, the International Day of the Migrant.

“These beliefs call upon us to support those who flee violence and poverty, and to ask our government to respect the human rights of migrants and to end the militarization of border communities,” said Laura Boyce, associate general secretary of the AFSC in the United States.

AFSC Secretary General Joyce Ajlouni declared, “In the face of the rhetoric and policy of violence of the Trump’s administration, we are here to support border residents against militarization and for absolute protection for immigrants seeking shelter and asylum.”

In a joint statement, parishioners of various faiths who participated stated that the march had served to ensure that all of the religions participating in the action had asked the United States to respect the human right of migration, to put an end to the militarization of the border communities, and to stop the deportations of immigrants. 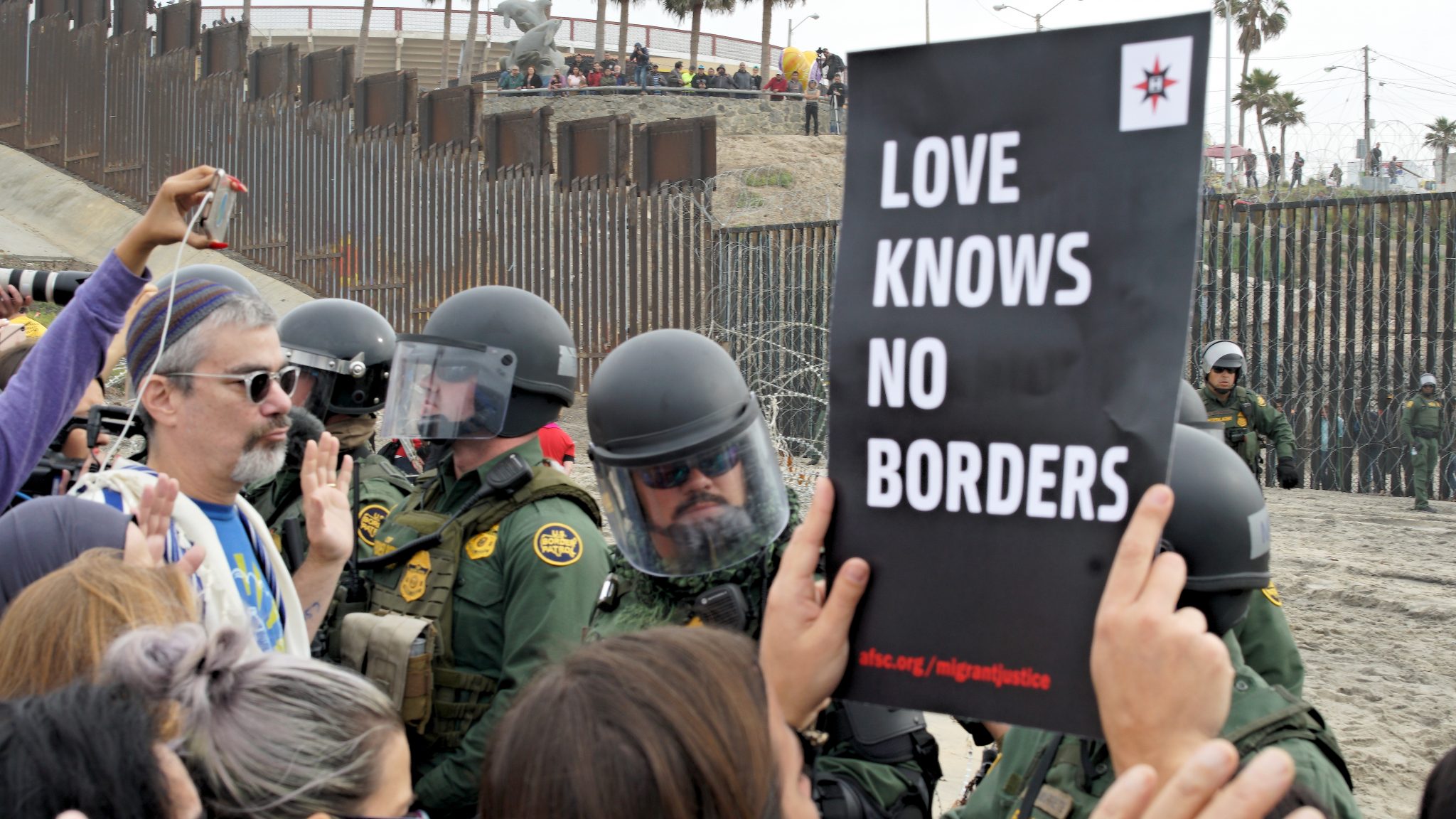 They also demanded that the U.S. government dismantle the Office of Immigration and Customs Enforcement (ICE) and curb the growing budget of the Customs and Border Protection Office (CBP).

Pedro Ríos, director of the AFSC’s Border Project, explained that the believers of all religions who participated in civil disobedience did so precisely on the basis of their beliefs.

The prophets and founders of all religions, all of them, were migrants, and all preached love, Ríos added.

Manuel Ocaño is a journalist based in San Diego.