TRACKED: Southern Border Journalist Organizations Convene Panel on Getting Targeted by US Government

SAN DIEGO/TIJUANA —Immigrant rights activists and freelance journalists who suspected their government was spying on them only to later learn the Trump Administration was keeping a secret database of their names and travel patterns remain unsettled.

The government’s failure to provide records requests from news outlets and the ACLU was admonished by panelists on Wednesday, including Tom Jones, NBC San Diego’s Investigative Team Executive Producer.

It was his NBC team who publicly revealed the leaked “Secure Line” database information which contained Kafkaesque proof that activists and journalists suspected: months of searches and visa revocations, and long sessions of questioning in secondary inspection during border crossings were not random. Nor were the car and personal body searches or the seizure of personal cameras and other journalism work equipment. Yes, the U.S. government has been spying on journalists covering the Central American Caravan that arrived in Tijuana, Mexico since at least October of 2018. 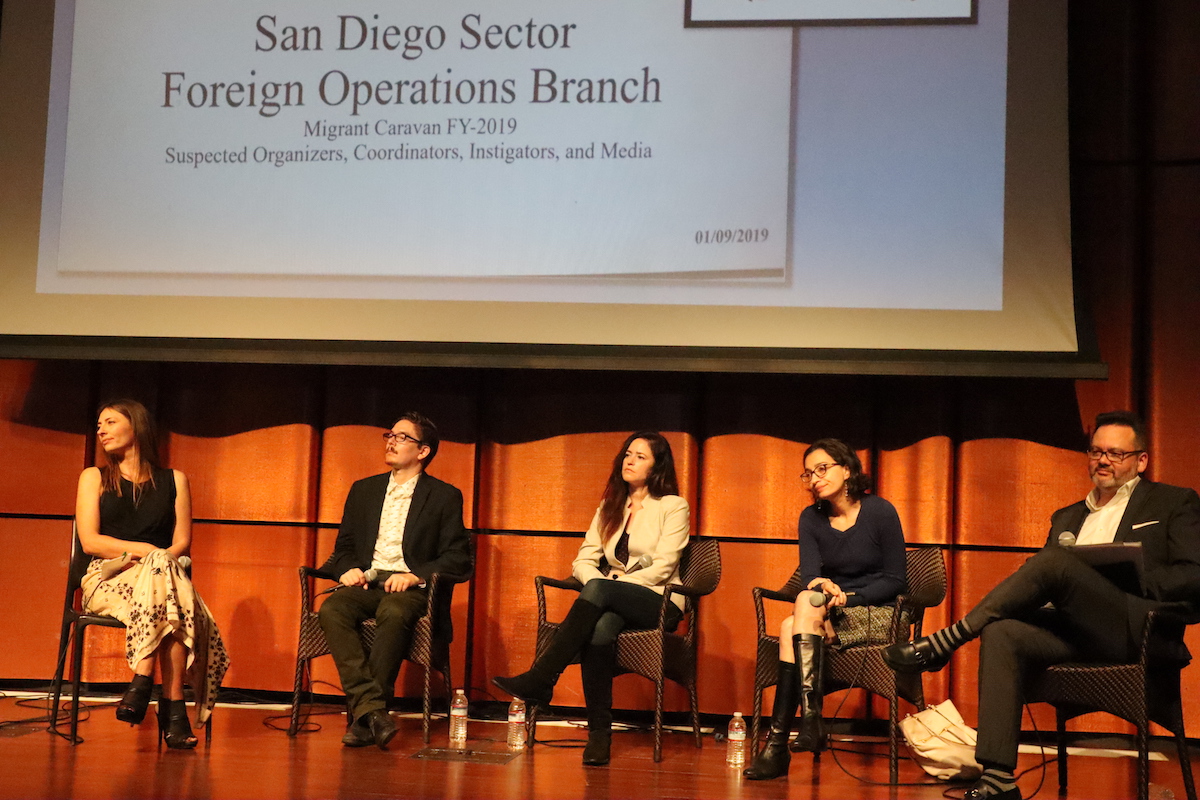 Panelists who spoke on Wednesday night. (Photo by Sara Gurling)

Joining the panel was Pedro Calderon Michel, News Director at Telemundo 20, who spoke to Latino Rebels, stating that he is disturbed by the database content  and that “the government only made a brief initial response but has not responded to requests for information.” Panelist and photographer Ariana Drehsler, a member of the media who was tracked in the database.said that she found out about being on the list when NBC 7 reached out to her and told her she was on it. During the panel discussion, Drehsler described being concerned. The government harassment and surveillance led to changes in her work patterns. The infringement on her press freedoms forced her to travel differently with her work gear, leaving her lap top behind for example.

As recently as March 15, Congressman Joaquín Castro of Texas —Chairman of the Congressional Hispanic Caucus, Vice Chair of the House Foreign Affairs Committee, and a member of the House Intelligence Committee and House Education and Labor Committee— led 18 members of Congress to request information about the tracking of the more than 50 journalists, U.S.-based attorneys and humanitarians who appear on the list. In a letter about the tracked individuals on the “Operation Secure Line” government database, members of congress wrote:

“Operation Secure Line not only appears invasive, if reports are true, it is also unconstitutional. Free press is a hallmark of our country’s founding.”

They also added this:

“The fact that DHS would track U.S. journalists, attorneys and volunteers attempting to do their jobs when they have committed no crime is deeply concerning. Singling them out precisely because of their constitutionally protected speech strikes at the core of the values embodied by the First Amendment” continued the letter sent by Congress.”

Latino Rebels Radio also spoke with Ebadolahi about the panel:

Mexican-born Sara Gurling is a progressive Democrat serving as a 2019-2021 California Democratic Party 80th Assembly District Delegate. She is a trade unionist with more than 20 years representing workers rights and serves as a Labor Representative with the California Nurses Association/National Nurses United. She was the Director of Organizing with the American Civil Liberties Union (ACLU) of San Diego and is known primarily as a humanitarian pro-justice labor organizer, immigrant rights activist and labor studies college teacher. She is also the president emeritus of Border Angels. Her journalistic radio and print work is featured in the United States and Mexico.