A new Arizona poll of registered voters released Friday by Univision News and Arizona State University’s Center for Latina/os and American Politics said that Joe Biden leads President Trump in the state, “but he still has to win over many Latinos who prefer [Bernie] Sanders and are unsure whether to vote for the former vice president if he is the Democratic presidential candidate,” a Univision media release about the poll said.

According to the findings, Biden has an 8-point lead over Trump in a November match-up (50-42) in Arizona and 37-point lead with Arizona Latino voters. However, if Biden is indeed the presumptive Democratic nominee, another question from the poll asked Latino Democrats who they would support if their preferred candidate dropped from the race. According to that question, only 59% of Latino respondents slightly “said they would vote for the Democrat regardless of who is nominated, indicating that the former vice president could still win more Latino voters,” Univision News said. 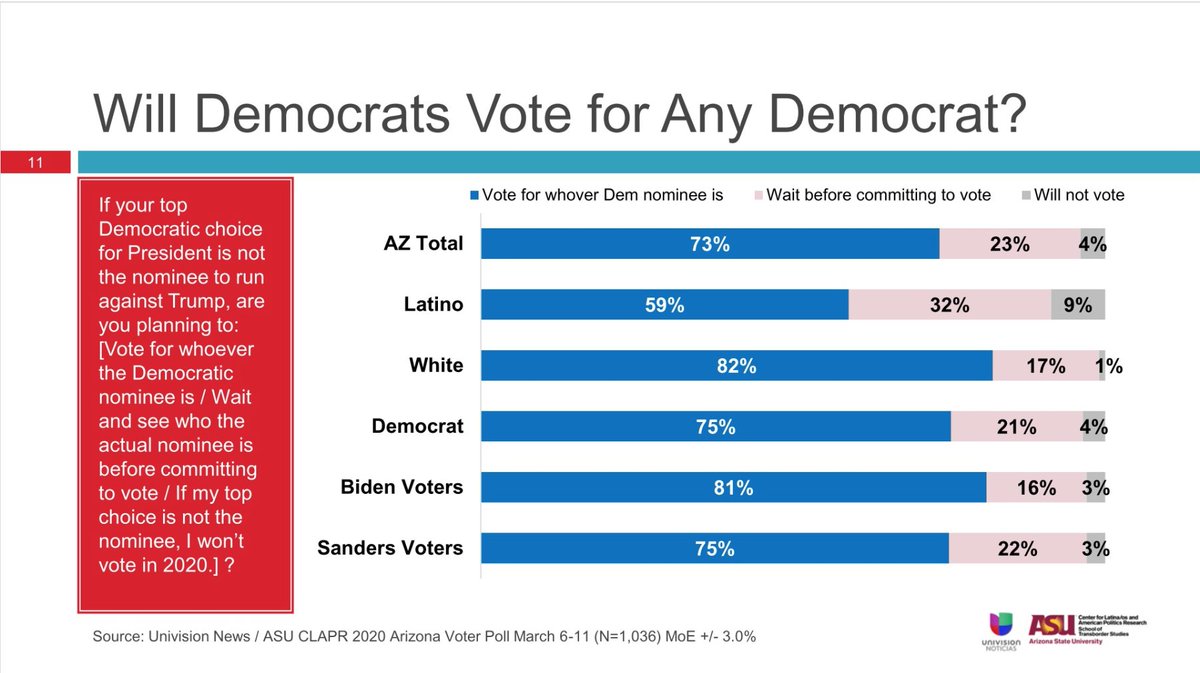 The same Univision polls show Sanders leading Biden with Arizona Latinos by 5 points (44–39), suggesting that if Sanders is not the nominee, Biden would need to get more Arizona Latinos to vote for him. That finding would confirm the general 2020 trend that Sanders continues to do well with Latinos and younger Latinos in general, and that Biden might have to make sure Latinos come out for him in November, in contrast to 2016, when Democratic nominee Hillary Clinton underperformed with Latinos.

Latino Rebels founder Julio Ricardo Varela attended the Friday press call that shared the Univision findings. There were two polls conducted by Latino Decisions (a Latino Rebels contributor): a statewide Arizona poll and an Arizona Latino poll. The call started with an explanation of the methodology.

Univision acknowledges that Latino margin of error in this Arizona poll is higher than it wanted.

The first tweet below shows that healthcare matters to all Arizona voters, but border security polls higher with statewide Arizona voters than with Arizona Latino voters. The second tweet indicates that President Trump’s approval rating for a state he won last cycle is not that good, and this was before more national attention to the ongoing COVID-19 crisis had happened.

Trump approval rating is not that good in #Arizona for this @UnivisionNews poll. pic.twitter.com/nMidV0zxRB

The poll also looked at the upcoming Senate Race between Democrat Mark Kelly and Republican incumbent Martha McSally. The following tweet shows Kelly faring better than McSally. The next tweet after that one breaks down the support for Biden and Sanders across different voter categories. Biden does better with white voters and older voters, while Sanders is doing better with Latinos and younger voters. Where have we seen that before?

This first tweet below focuses on just two Democratic candidates: Biden or Sanders. They are in line with the previous tweet. The next tweet shows how a generic Democrat would do against Trump.

These two tweets revisit how Biden might need more Latino support if here were the Democratic nominee in November.

These two tweets show who won’t vote for Trump or for Sanders.

This first tweet shows who would not vote for Biden. The next tweet focuses on candidates’ past statements.

After asking about personal economic situations, the polls asked about Medicare for All. According to the polls, 74% of Arizona Latinos support it, while 56% of all Arizona voters favor it.

Medicare for All #Arizona pic.twitter.com/jKkCKXV4NC

Both polls show opposition of a border wall and support for DREAMers. There is also consensus that Latinos do experience racism and discrimination.

Finally, there was also a question about how political parties outreach to Latinos. Interestingly, 48% of Arizona Latinos think that Democrats still have a lot of work to do. The Republican numbers are not surprising.

And @ConMijente Chisme Series gets a shout out on @UnivisionNews #Arizona poll press call for its work on outreach in the stage.

The statewide Arizona cross-tabs are below:

The Arizona Latino cross-tabs are here: