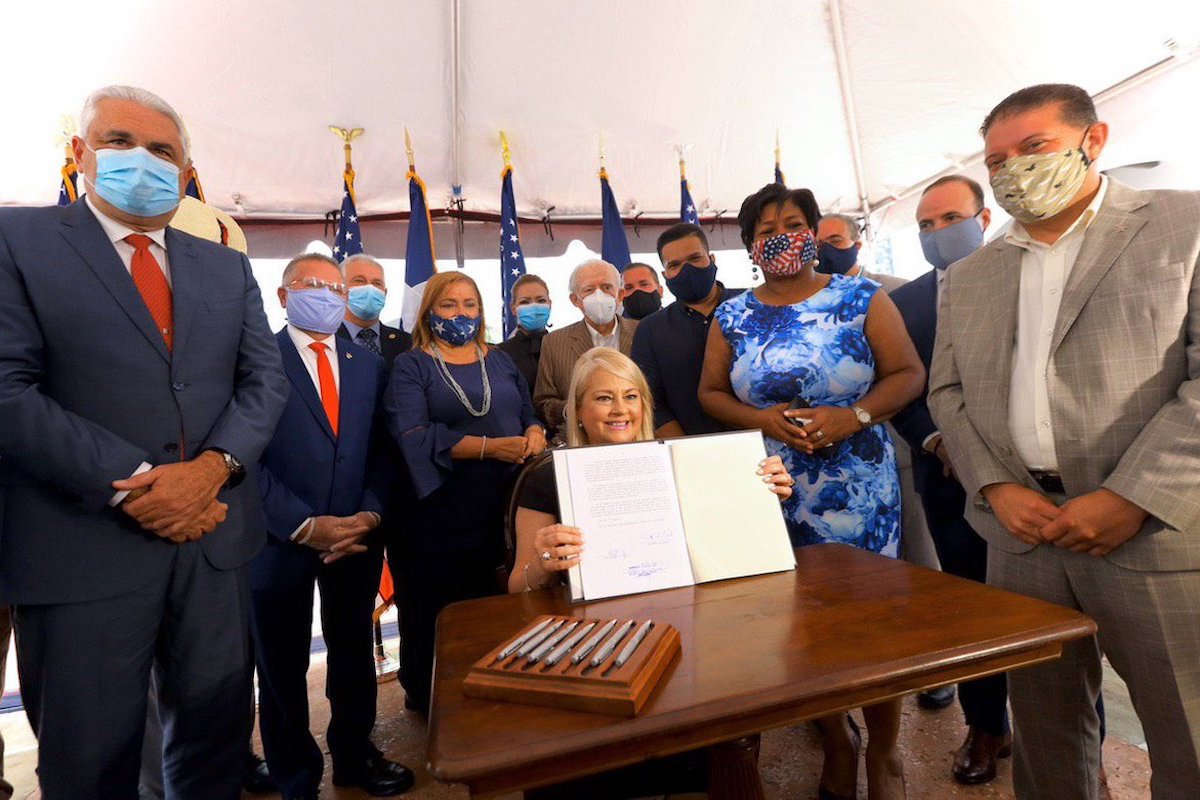 The governor of Puerto Rico recently announced that alongside this November’s general election on the island there will be a simple “Yes” or “No” vote on statehood for Puerto Rico.

The reactions from many of those who (myself included) do not support statehood have been swift. They say it’s a mere electoral ploy to draw pro-statehood voters to the polls, ever fooled by the promise that statehood is just around the corner. That’s certainly true. They say that it’s just a symbolic, non-binding vote (as all previous Puerto Rican status plebiscites have been) and that the United States will simply ignore the results, as they always have. That’s true too.

Therefore, they conclude that the whole thing is a complete waste of time.

This plebiscite and any other, though they may be concocted in bad faith by politicians with bad intentions, are nonetheless invaluable opportunities for Puerto Ricans to exercise what little power we have as a colonized people: the inalienable right to express ourselves, with clarity and conviction, about our nation’s political future.

The cynicism of well-intentioned Puerto Ricans about this latest status plebiscite (which will be the sixth in our history, fifth in the last 30 years, and third in just the last decade) is more than understandable. None of the other votes has contributed whatsoever to Puerto Rico’s decolonization.

A bit of history: the 1967 and 1993 plebiscites certainly weren’t going to solve anything, as the so-called “Commonwealth” —basically, the status quo— emerged on top. In 1998, the top vote-getter was “none of the above,” the option favored by the pro-Commonwealth party, which effectively meant another victory for the status quo. In the 2012 two-part plebiscite, Puerto Ricans voted “No” on the first question (“Are you in favor of maintaining the current territorial status?”) and roundly supported statehood on the second, which asked voters to choose their preferred status option and which most status quo supporters decided to leave blank. In 2017, statehood won with 97% of the vote but with very low turnout due to a boycott from the pro-Commonwealth party and, to a lesser extent, from independence supporters.

It’s worth considering the cost of delegitimizing that most recent plebiscite. During congressional hearings on Puerto Rico, representatives of various political parties basically urged the U.S. government not to heed the results—as if they needed any more reasons to ignore us. In hundreds of news and opinion pieces on Puerto Rico (especially after Hurricane María, when the press momentarily turned its attention to some of the nefarious consequences of our colonial relationship with the United States) journalists and pundits were forced to report that barely 20% of Puerto Ricans had voted on such a fundamental issue, mostly for reasons related to Puerto Rican partisan politics that to the average reader must have been completely opaque or unintelligible.

The truth is that right now, after events (the hurricane, Trump’s humiliations, the scandals that led to Governor Rosselló’s ouster, the earthquakes, etc.) that could very well have shifted public opinion on Puerto Rico’s status, neither in the U.S. nor on the island do we have a clear idea of where Puerto Ricans stand on the matter.

I don’t mean to say that, if there were now a clear majority that sent a strong a message, we’d be well on our way to resolving the status issue. It would be naïve to think so. But American politicians (and to the extent that they think about it at all, the American people) take refuge in the notion that “Puerto Rico’s status is for Puerto Ricans to decide, and so far they’re undecided.” Anybody who understands the past and present of Puerto Rico’s relationship to the Untied States knows that’s a misleading and wholly inadequate answer. But the truth is that it sounds good and democratic, and it gives American leaders the easy justification they need to turn the page instead of truly addressing the issue, which, for various reasons, they don’t want to do. For Puerto Ricans, the task should be to spoil their game, make it harder for them to hide behind those toothless statements, and force them to confront the clearest declaration of our political will that we can possibly muster.

Would it be better if the coming plebiscite were binding or otherwise sanctioned by the United States? Of course. Not because it would force the U.S. to do anything. They most certainly wouldn’t heed the likeliest outcome: a victory for statehood. But their explicit refusal to do so would be another useful piece of evidence that the U.S. has no intention of admitting Puerto Rico into the Union. This awkward scenario, of course, is why no plebiscite has been binding or ever will be. Are Puerto Ricans to allow, then, for some refusal by the Trump administration to dictate whether we should vote on our fate? It is ironic that those of us who most resist and resent the federal government’s interference in Puerto Rico’s affair would now decide its promise or permission is a necessary precondition to a plebiscite, and declare its useless to proceed without the sanction of our colonial masters?

Likewise, while I recognize that with or without Washington’s consent the November plebiscite will not directly lead to a change in Puerto Rico’s status, that strikes me as a poor reason to disparage or ignore it. Politics is not that simple. Major transformations are not short-term propositions, and they do not occur through simple “if we do A, we get B” mechanisms. You have to lay the groundwork, apply pressure, slowly shift public opinion, and combat —for as long as it takes— the political and institutional forces that undergird the status quo. The will of the Puerto Rican people must play a key role in those processes.

Is a plebiscite the right way to assert that will and advance meaningful change on the issue? Absolutely. It need not be the only way: I support some kind of “status assembly” in which representatives of the various alternatives deliberate and negotiate. But no one has ever explained why such an assembly wouldn’t merely reflect and reproduce the current divisions, and the result of its deliberations would likely be put to a referendum-like vote anyway. There’s no guarantee that the U.S. would heed the results of that either. Plebiscites aren’t perfect, but they’re the most direct and democratic expression of what the Puerto Rican people want.

Those who might question why, then, after five plebiscites, we’re nowhere nearer a solution to this problem, might do well to look less at the process and more at what people have so far voted for. The status quo was immoral, detrimental, and unsustainable when it “won” previous plebiscites, and it’s even more so now. The fact that pluralities supported it then and that a sizable minority supports it to this day makes it no less illegitimate. Statehood prevailed in the last two plebiscites (such as they were) but, more importantly, it has enjoyed every possible institutional and political advantage: pro-statehood Puerto Rican governors, Resident Commissioners introducing statehood bills in the U.S. House of Representatives, shadow delegations to Congress, purported support from American politicians and the American people, even inclusion (for however little it’s worth) in the 2016 Republican Party platform. Despite all that, it’s never even gotten out of the gate.

The supposed failure of plebiscites has really only ever been the failure of statehood as an acceptable option for the United States. To dismiss plebiscites as a useful political tool is to stand in a room with two doors, open only one, find a brick wall on the other side, and conclude that doors are an ineffective means of leaving the room. And while I will not now make the argument for what’s behind Door #2 —independence— I would remind all of Sherlock Holmes’ famous maxim: “when you have eliminated the impossible, whatever is left, however improbable, must be the truth.”

The status issue has to be resolved sooner rather than later. It is not, as some think, a secondary matter that distracts from more “urgent” problems. It is the foundational rot at the root of many of those problems, and it prevents real, lasting solutions. And it’s not, as some also believe, an inert ideological debate from the days of bad old Puerto Rican politics that has only served to elevate mediocre and corrupt political leaders. It’s certainly done that in the case of the pro-statehood and pro-Commonwealth parties, but not because they focus on the status issue, but because they support status options that are evidently unattainable and/or harmful, which only betrays their unimpressive intellectual and moral quality.

This November, as we hopefully vote for better leaders, the plebiscite will afford Puerto Ricans the chance to take a step forward in addressing the Island’s status. It may be a miniscule step, but small steps are all we have. More importantly, it’s an invitation to reflect on our political attitudes and beliefs about Puerto Rico; to develop a theory of change about how Puerto Ricans can live in a fairer, more prosperous nation; and to act on whatever our role may be in that bringing it about. (For what it’s worth, that’s a reflection Americans should engage in too.) That would be a giant leap. Let’s not waste the opportunity to take it.

Alberto Medina is a writer/editor. He tweets from @AlbertoMedinaPR.