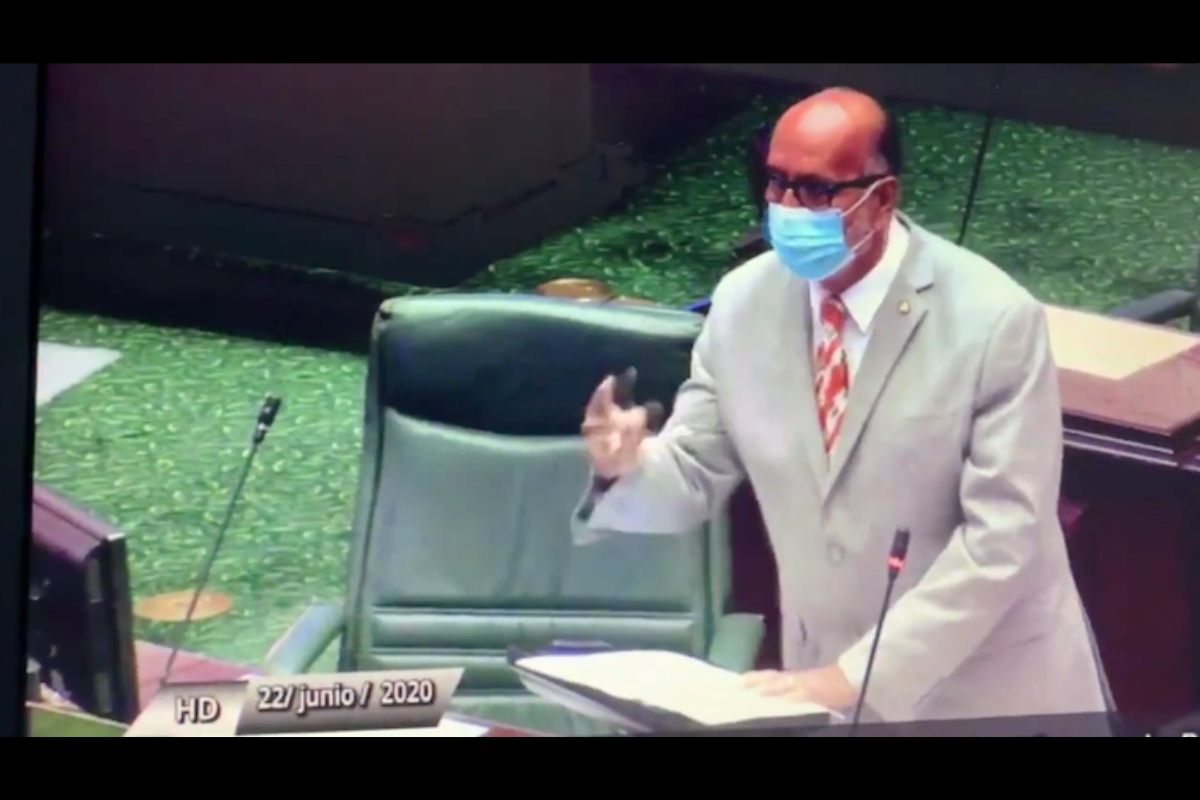 During Monday’s legislative session on the floor of Puerto Rico’s House of Representatives —and in the midst of a global movement for Black Lives— a Puerto Rican legislature uttered the N-word, in defense of a former talk show host who lost his job for uttering the N-word last week on air.

Rep. Junior Pérez Ortiz of the pro-statehood New Progressive Party (PNP) was speaking to a resolution to acknowledge the work of Luis Dávila Colón, the host of “El Azote” radio show on WKAQ whose contract was terminated and show was canceled by Univision Communications (the station’s parent company) last Thursday after Univision determined that Dávila Colón’s use of the N-word on air was immediate cause for dismissal.

“We see a double standard when you are censored for saying ‘n•gger’ or ‘whore’ to someone,” Pérez Ortiz said. “But I have not seen any attempt to censor a public relations specialist who called the governor of Puerto Rico a ‘pig.’

Pérez Ortiz was referring to Dávila Colón’s use of the N-word last week (first reported by Latino Rebels) and when he was suspended earlier this year (before his firing on Thursday by Univision) for calling San Juan mayor Carmen Yulín Cruz a ‘whore.’

In his speech, Pérez Ortiz was trying to equate these two incidents to a now-deleted tweet by public relations specialist Julio Nuñez about governor Wanda Vázquez. Many of Dávila Colón’s supporters claimed that Nuñez was Telemundo talent, and that the network should remove him from his job for his tweet, which he subsequently apologized for. However, when Latino Rebels spoke with Telemundo about Nuñez, it had no comment about the tweet because the network said he was not a Telemundo employee.

And @juliovnunez has not appeared on that @TelemundoPR show since COVID-19 outbreak.

So all of you who say he's an employee, he is not. In fact, @juliovnunez changed his profile because he was misrepresenting his affiliation with Telemundo. He doesn't work for them.

Later in the floor speech, Pérez Ortiz compared Dávila Colón’s situation to that of Rosa Parks.

The resolution was confirmed by several journalists in Puerto Rico who cover legislative sessions.

Only in #PuertoRico, this is exactly part of problem. Instead of discussing how a racial slur said on air by a talk show host was a violation of his contract with a private US employer, you get politicians comparing him to Rosa Parks now.https://t.co/4XpVW0wGDl

Legislators from opposing parties tried to have the slurs stricken from the legislative record to no success.

News of Dávila Colón’s firing has been met by a wide variety of reactions. First, several online profiles who support Dávila Colón and believe he was saying the N-word “in context” began to share another example of the N-word being said on WAPA-TV and a clip of Yulín Cruz telling a joke about getting COVID-19 in China. Second, with no actual evidence, he and his supporters have continued to falsely accuse Latino Rebels of being part of a leftist plot to take him down.

This happened as well.

BTW, that elected official who uttered the N-word on the floor of Puerto Rico's House of Representatives during a global movement for Black Lives also did this pic.twitter.com/0gLxMwY9B2

Claims of censorship are not accurate because Dávila Colón was under contract by a private company. It is standard for talent contracts to contain clauses that would protect a broadcaster from having talent utter racial slurs on air.

A private company like Univision can do what it wants based on contractual requirements it has for talent. There are clauses in those contracts that can lead to cause.

That's not censorship. Dávila Colón lost his show because of what he said. Just like it Imus and many others.

Monday’s events in Puerto Rico are happening in the middle of the Black Lives Matter movement. On the same day as Pérez Ortiz uttered the N-word on the floor of Puerto Rico’s House of Representatives, late-night host Jimmy Kimmel was being criticized and trending on social media for using the N-word as a white man when impersonating Snoop Dogg.

UPDATE, June 23, 2020: During his daily Facebook live sessions, Dávila Colón said that he did not authorize or sought for any recognition from any public office. He also urged people to not be lazy and allow for more controversy to happen because of this. Finally, Dávila Colón said he rejects any resolution and it should be removed from the record. 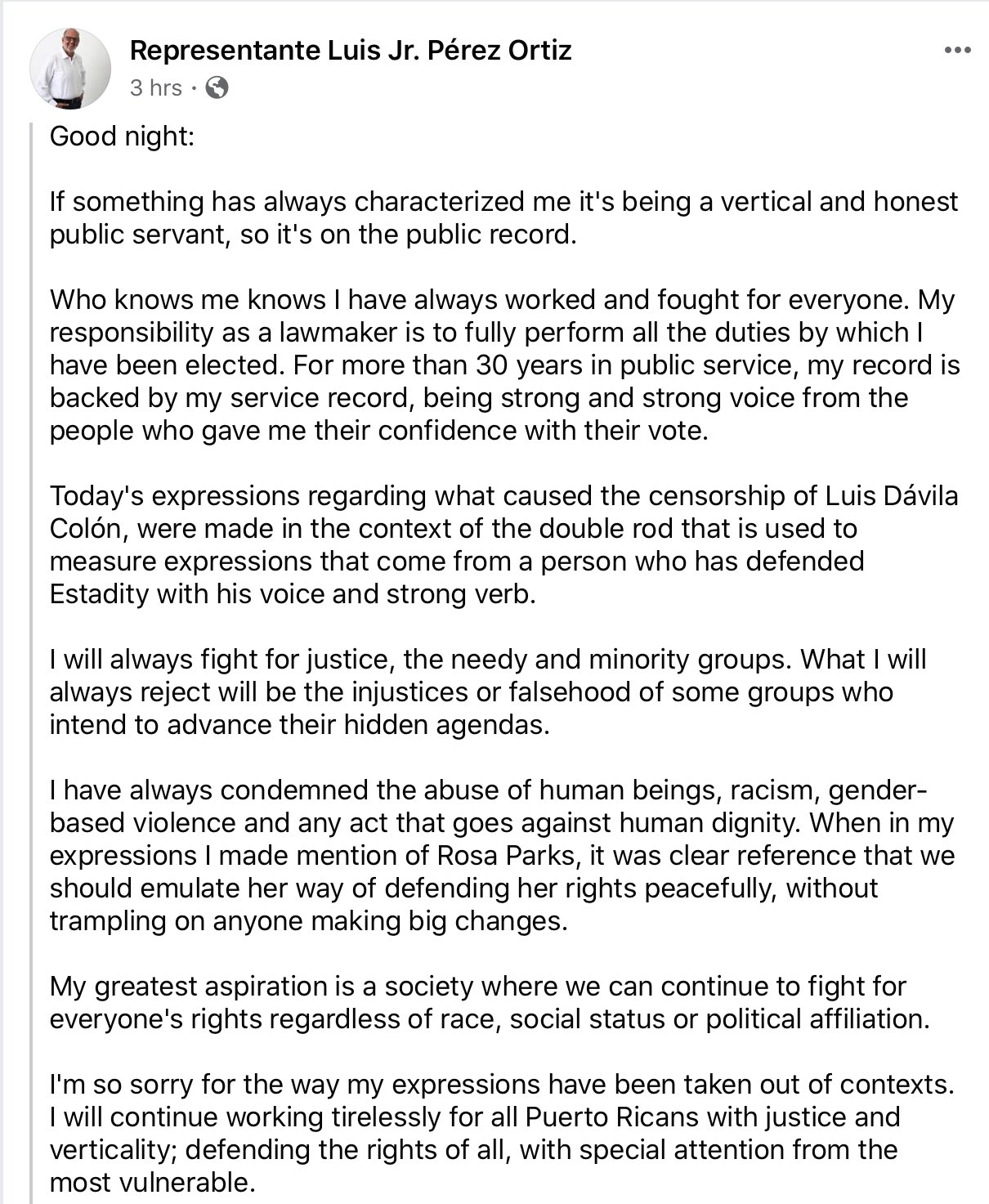