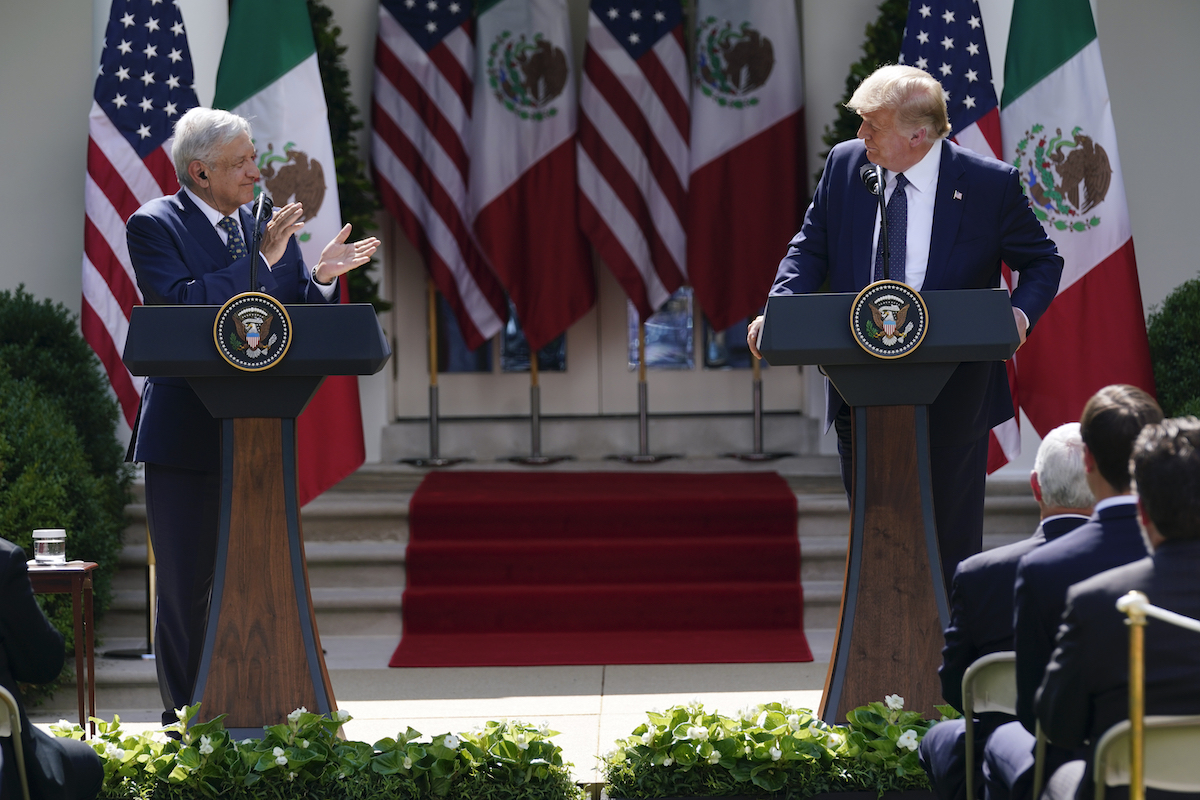 Trump’s affectionate words were in stark contrast to the days when he called Mexicans “rapists” and railed against migrants entering the United States illegally. Lopez Obrador had cordial words for Trump, too, saying that while the two leaders have disagreed, it was better to find common ground and avoid slinging insults.

“Instead of remembering the insults, things like that, against me, we have received from you President Trump an understanding and respect,” López Obrador said. “Some people thought ideological differences would inevitably lead to confrontations.”

Back home, López Obrador has received criticism for making this his first foreign trip as president, just four months before the election. With no meetings planned with former Vice President Joe Biden, López Obrador seemingly is banking that Trump will win a second term.

The meeting was billed as a celebration of economic ties and the new North American trade agreement, which took effect July 1. Critics in Mexico worry that López Obrador is being used as a political pawn to bolster the Trump campaign.

López Obrador arrived at the White House after morning stops at the Lincoln Memorial and a statue of Benito Juárez, a former Mexican president and national hero. Culminating the visit was a planned White House dinner with about 20 U.S. and Mexican business leaders, including Carlos Slim, one of the richest men in the world.

Trump and López Obrador discussed the United States-Mexico-Canada trade deal. It replaced the North American Free Trade Agreement, which was blamed for prompting U.S. companies to shift manufacturing to Mexico. The visit could give Trump an opening to bash his Democratic opponent, former Vice President Joe Biden, for voting for NAFTA when he was a senator. 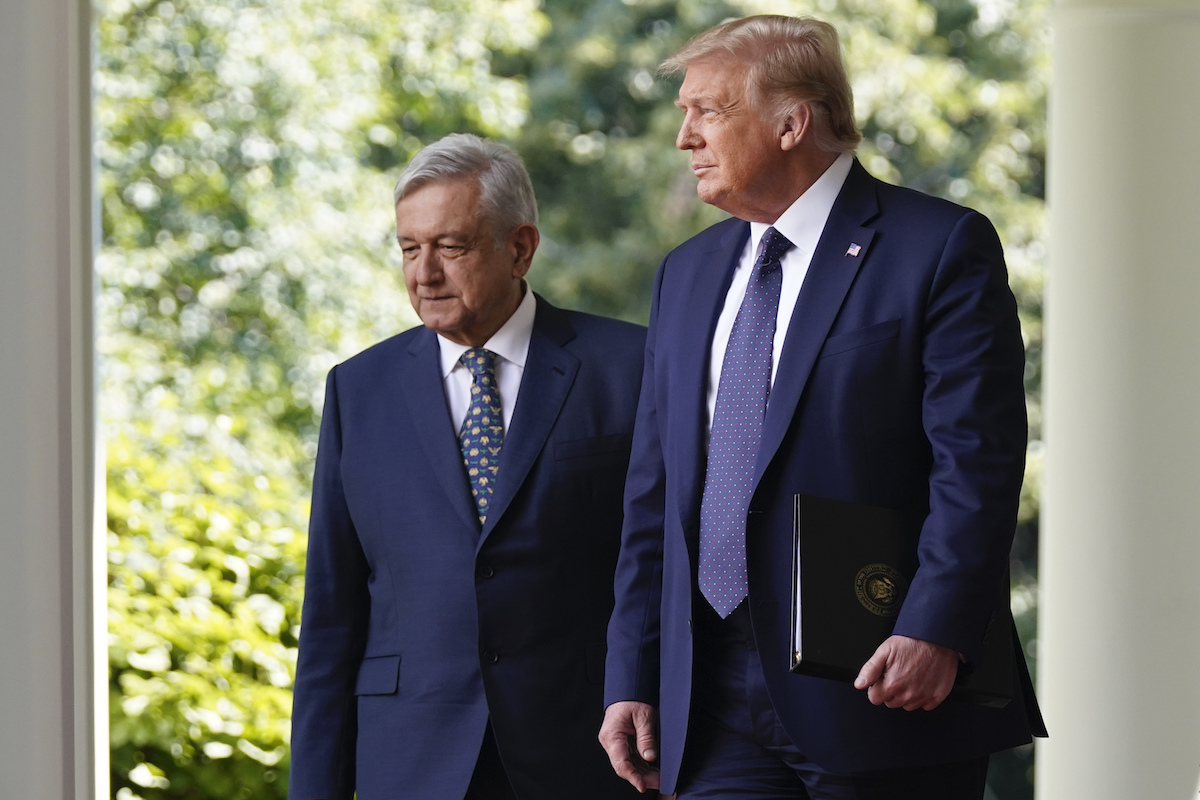 The Democratic Party chairman, Tom Pérez, recalled Trump’s insults of Mexicans and said the president was now trying to take credit for a trade deal that Democrats in Congress helped make possible.

“Latino communities, immigrants, and the American people deserve a president with the empathy and experience to lead us forward, not a demagogue who cheers on bigotry from the White House,” Pérez said, urging voters to elect Biden.

A former U.S. ambassador to Mexico, Roberta Jacobson, questioned the timing of the visit and Mexico’s decision not to meet with Democrats. In a letter to Trump last week, a dozen Democratic members of the Congressional Hispanic Caucus denounced the meeting with Mexico’s president as an effort to distract voters from rising cases of coronavirus in the United States and said it was a “blatant attempt” to politicize relations between the allies.

Jacobson, ambassador from 2016 to 2018, said she saw no important reasons for López Obrador to make the trip. Canada’s prime minister and Trump rival, Justin Trudeau, decided not to come to Washington celebrate the agreement, citing scheduling conflicts.

Jacobson expected López Obrador, who is known as AMLO, to hear that he needs to improve the investment climate in Mexico, because without it, the deal alone will not pull his economy out of its recession.

With the U.S. looking to reduce its supply chain in China, Mexico is well-positioned to step into the void, administration officials told reporters on a call outlining the visit. Cooperation between the two countries allowed the flow of goods to continue across the U.S.-Mexico border despite shutdowns caused by the COVID-19 pandemic, according to the White House.

Mexico is the largest U.S. trading partner in goods, and during the pandemic the two nations worked closely to keep supply chains going so plants in both countries would not have to close because of a lack of parts from the other, officials said.

Mexicans remain wary of Trump, whose denunciations are intended to rally his most loyal supporters. Trump has threatened tariffs to strong-arm Mexico into playing an uncomfortable role in U.S. immigration policy and insisted that Mexico will pay for a border wall meant to keep migrants out of the U.S.

López Obrador has avoided fights with Trump and the two have a surprisingly warm relationship despite coming from different ends of the political spectrum. Trump flashed a thumb’s up as he and a military honor guard greeted Lopez Obrador to the White House and they posed for pictures.

López Obrador, a veteran leftist, likes to point out that Trump helped Mexico reach a deal with other oil-producing nations to cut production and aided Mexico in obtaining more ventilators to cope with the coronavirus pandemic. Both presidents talk about a blossoming friendship that seems to stem from their pursuit of nationalist agendas.

If Trump were to win a second term, López Obrador could be calculating he would have a friend for the remaining four years of his administration. If Biden were to take the White House, the Mexican leader would hope the new American president would respect the importance of the bilateral relationship and not hold a grudge.