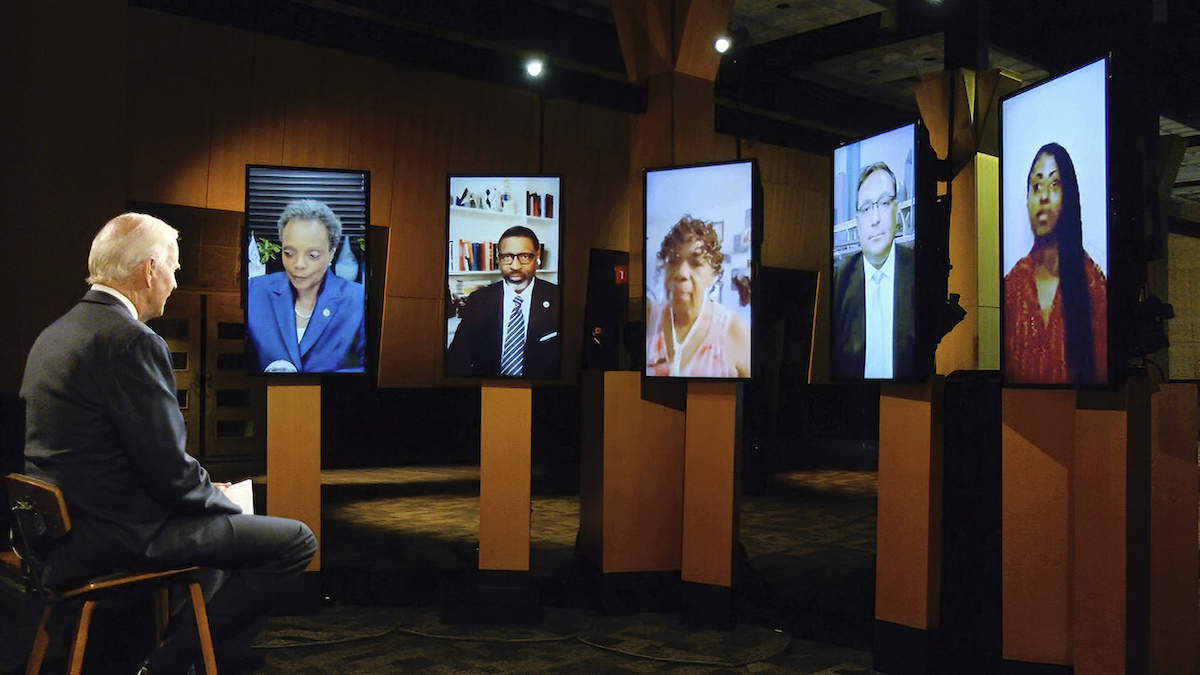 On Monday night, the Democratic National Convention (DNC) was officially called to order. Due to the coronavirus pandemic, the virtual event went from the traditional big stadium-size scenario and choreographed live productions to a small studio in Los Angeles with live reports from speakers in their home state and pre-recorded videos.

How much does the Democratic Party care about Latinos?

So much they will rather include Republicans & Bloomberg in the #DNC speaker lineup & not Julian Castro & other Latino leaders.

And no don’t tell me that giving AOC 60 secs is enough. ?

Still, last night’s event began with a reading of the preamble to the U.S. Constitution—featuring the voices of community leaders such as health care activist Ady Barkan, labor leader and political organizer Dolores Huerta, transgender advocate Jaynce Pointdexter, among others.

In a segment titled “We the People Demand Racial Justice,” Washington, D.C. Mayor Muriel Bowser reflected on the day in June where peaceful protesters were teargassed in order to take a photo in the city’s oldest home of worship.

Yet, the most powerful moment came from Philonise Floyd, brother of George Floyd.

“George had a giving spirit. A spirit that has shown up on streets around our nation, and around the world —people of all races, all ages, all genders, all backgrounds— peacefully protesting in the name of love and unity,” Philonise Floyd said.

Together, the Floyd family then led the convention in a moment of silence honoring Breonna Taylor, Ahmaud Arbery, Eric Garner, Stephon Clark, Atatiana Jefferson, Sandra Bland, and so many others.

Another moment came from Kristin Urquiza, a Latina from Phoenix, who shared the story of her father who died from COVID-19 complications in May.

Sen. Cortez Masto, the first elected Latina U.S. Senator, spoke about the importance of voting through mail, encouraging people to vote in November.

In another pre-recorded video, some of the former 2020 presidential candidates came together to talk about why they ran, what they’re fighting for, and why they believe Joe Biden can bring the nation together. Even though the past Democratic primaries included the most diverse set of candidates ever in the history of the U.S., Former Secretary of Housing and Urban Development Julián Castro, the only Latino to run for president in 2020, was notably absent.

“I’d be lying to you if I said that I’m not disappointed that there aren’t more Latinos and Latinas generally speaking on that program,” said Castro to MSNBC. “You think about the beautiful coalition that has become the Democratic Party over the last few years, I’m not sure right not that it’s fully represented on that stage.”

The upcoming 2020 Presidential election could be decided by Latino voters in certain battleground states. A record 32 million Latinos eligible to vote in November, making them the largest voting block after white voters.

Questions about enthusiasm for Joe Biden linger. A poll of young Latino voters indicated that 60% of Latinos between 18 and 34 years old would choose Biden in the presidential election and that 19% would choose President Donald Trump. A new national poll among all Latino adults says Biden gets 66% of support with Trump at 23%.

According to Albert Morales, Political Director at Latino Decisions, “Democratic campaigns too often fail to sufficiently reach them via direct mail, canvassing or phone banks. Indeed, countless polls and studies conducted by Latino Decisions show that Latinos report they are contacted by campaigns at much lower rates than white or even black voters”—similar to the 2018 elections.

In order to win the 2020 elections, Morales writes that “organizers have more targeting tools at their disposal than ever. For those working in states that will make or break their candidates, contests can turn on the amount and type of resources invested to turn out low-propensity voters. A new philosophy is essential if Democrats ever hope to flip any state.”

During the Democratic primaries, Bernie Sanders was able to win widespread support from Latinos by talking about issues that Latinos really care about such as Medicare for All, free college, and immigration reform. Moreover, the Bernie Sanders campaign invested a lot in Latino organizing across states.

“The protests that erupted in Minneapolis and the outrage over the recent killing of Andrés Guardado in Los Angeles with five gunshots to his back, have touched Latinos across the country,” wrote Morales following some key finding from the Battleground Survey. “This election presents an unprecedented opportunity to strengthen the coalition between the Black community and Latinos that will help change the direction of the country this coming November.”

Even though Latino representation is lacking at this year’s convention, several Latino organizations came forward to support Biden and running mate Kamala Harris.

“More than anything, our country desperately needs leadership that can unite us, not divide us based on where we were born or what we look like,” said Marielena Hincapié, executive director of the National Immigration Law Center Immigrant Justice Fund. “This election is a referendum on our nation’s values and we can’t take anything for granted. All of us who want to see our country celebrate the role that immigrants play and the contributions they continue to make must unite behind Joe Biden and Kamala Harris.”

“It’s a great day to celebrate the first Black vice-presidential candidate on a major party ticket. November’s election is critical for our Latino, Black and immigrant communities and we are sure that Harris, daughter of immigrants with extensive experience in public service, is the right leader who will fight for social and economic justice for all working families, regardless of their country of origin, the color of their skin, or their immigration status,” Gustavo Torres, President of CASA in Action, said.

“So what do we do now? What’s our strategy? Over the past four years, a lot of people have asked me, “When others are going so low, does going high still really work?” My answer: going high is the only thing that works, because when we go low, when we use those same tactics of degrading and dehumanizing others, we just become part of the ugly noise that’s drowning out everything else,” Michelle Obama said near the end of the Monday’s DNC night.

Tuesday’s DNC theme is “Leadership Matters” and will feature Rep. Ocasio-Cortez for 60 seconds. The event will be live-streamed at 9:00pm ET on different news outlets and at the DNC’s website.