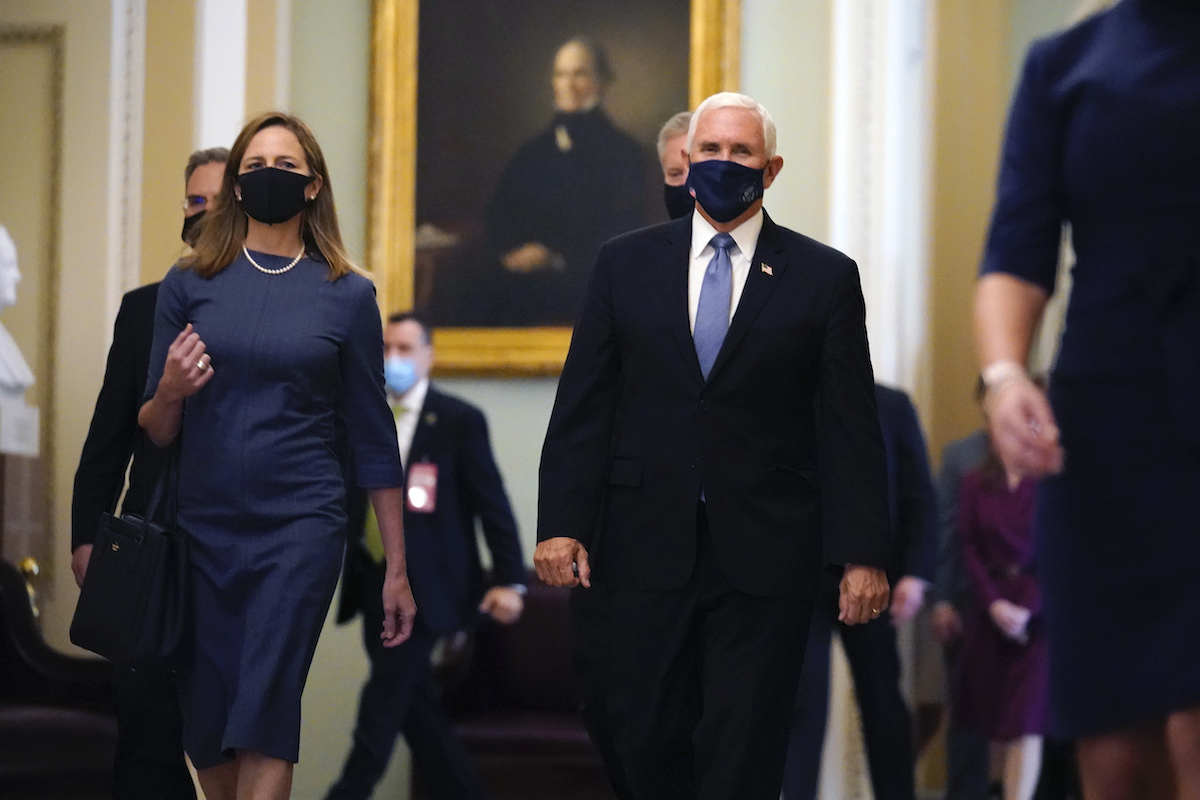 In recent years, the U.S. Supreme Court has increasingly considered issues crucial to the Latino community—from health care access to voting rights to immigrant justice, like keeping DREAMers in this country. The Supreme Court matters to all of us and now Senate Republicans are rushing through the President’s nominee at the fastest pace in half a century.

The Latino community is all too familiar with the constant attacks under this benighted presidency, and if Donald Trump is allowed a third Supreme Court justice, these attacks will continue long after he leaves office. In the near and long-term, his lifetime appointments to the highest court in the land will decide cases affecting the Latino community for decades to come, and he will make it harder for the Latino community and our rights to be recognized at the Court.

The stakes are high: Latinos need a nominee who is willing to stand up to rich and powerful corporations and protect the rights of working people. Latinos need someone who will provide equal justice for all. Amy Coney Barrett is not that nominee.

Trump promised to pick a nominee who is incapable of delivering equal justice on health care, reproductive freedom, voting rights, immigrant justice, and LGBTQ rights. Barrett’s record clearly suggests that she will use her position on the nation’s highest court to roll back the hard-fought rights and protections that Latinos and countless others currently enjoy.

With the elections underway, more than 7 million people have already decided who they want to lead us through this global pandemic, economic recession, racial reckoning —that has disproportionately affected Black and Brown people— and now to select the next justice. What’s more, the people overwhelmingly want the president they elect in November to appoint the next Supreme Court justice. With so much at stake, the Senate must not consider Barrett’s nomination under any circumstance.

Let’s fight for a Court that safeguards all of our rights.

Trump threatened that his Supreme Court nominees would cast the decisive vote to strip health care away from millions of people.

If I win the presidency, my judicial appointments will do the right thing unlike Bush's appointee John Roberts on ObamaCare.

Latinos consistently rank health care as a top issue, and the threat to lose it is very real: The Supreme Court will hear oral arguments in a Republican-led lawsuit seeking to declare the Affordable Care Act unconstitutional on November 10, just one week after Election Day and in the middle of a pandemic. A decision by the Court in the administration’s favor would have a particularly devastating impact on as many as 5.4 million Latinos and other communities of color that have been disproportionately harmed by the health and economic impacts of COVID-19.

Latinos experienced the largest coverage gains out of any other racial or ethnic group under the Affordable Care Act. Yet, Latinos are falling behind other groups in health coverage and access because of the Trump administration’s efforts to undermine the law. Indeed, Latinos are experiencing the largest decline in health insurance coverage under this administration: 18.7 percent of all Latinos, and 9.2 percent of Latino children lacked health insurance last year.

COVID-19 has further magnified the health inequities Latinos struggle with every day because of systemic racism in the health care system. In the United States, more than 212,000 people have died from COVID-19 and more than 7 million people have contracted the virus. Black and Brown communities are bearing the brunt. Latinos are the ethnic group most likely to work in jobs without health benefits and are overrepresented among essential jobs that cannot be performed remotely and expose them to the virus. As a result, Latinos have the highest COVID-19 infection rate and the second highest death rate of all ethnic groups. The need to make health care accessible for Latino workers who are putting their lives at risk to put food on our tables and keep society afloat could not be clearer.

Trump’s own words about who he would select for the Supreme Court and Barrett’s record confirm that she would not protect Latinos at a time when they need health care more than ever.

Trump vowed to appoint to the Supreme Court a judge who would “automatically” overturn Roe.

Latinas and women of color face significant barriers to a safe abortion and other preventative and maternal health services because of restrictions imposed on their care. Latinas and women of color not only have higher abortion rates, but also suffer poorer health outcomes than white women. Latinas also experience higher rates of unintended pregnancy—four out of 10 result in abortion.

Unfortunately, many women of color are already discriminated against and blocked from accessing crucial preventative and maternal care they need. Without safe access to these services, the health and socioeconomic consequences would be devastating—and potentially deadly for women of color.

Barrett is the fulfillment of Trump’s promise.

Trump has already said that he may not accept a peaceful transition of power, which is consistent with his constant attacks on voting rights.

Black and Brown voters already face a wide range of barriers to the ballot box, including voter purges, language barriers, voter intimidation, and poll closures. Specifically, Latinos suffer the most severe effect from voter ID laws out of all minority groups.

Justice Sotomayor, the only Latina Supreme Court justice, recently slammed her colleagues for “condoning” multiple state laws that have disenfranchised communities of color. Still, this year, Latinos are the nation’s largest racial or ethnic voting bloc outside of white voters, with a record 32 million eligible to vote in the presidential election. Hispanic Heritage Month reminds Latino voters that they can leverage their power to overcome these threats. With the elections underway, we must engage in the democratic process to decide who we want to sit on the Supreme Court for life and make decisions affecting every aspect of our lives.

With Barrett on the bench, Trump would ensure that the Supreme Court is weaponized as a central component of his assault on our democracy—further disenfranchising Latinos and other communities by upholding discriminatory laws.

Trump’s hateful rhetoric and actions have brought the anti-immigrant movement to the mainstream, from ripping families apart to ending legal protections as we know them to attempting to erase our loved ones from the census count.

Immigrant justice is on the line. In June, the Supreme Court rejected the Trump administration’s arbitrary and capricious attempt to end the DACA program for immigrants brought to the United States as children – by one vote. In 2019, the Supreme Court rejected the Trump administration’s efforts to add a citizenship question to the 2020 Census—by one vote. Now, Trump is pushing the Supreme Court to rubber-stamp his xenophobic policies. The Court will likely consider many important cases in the coming years, including whether to revoke legal protections for thousands who know no other country as home, deny asylum seekers their rights, and deny entire communities their rightful resources, such as basic access to health care, nutrition assistance, and housing.

Trump’s agenda to harm immigrants is clear in Barrett’s rulings against immigrants.

LGBTQ Latinos are fighting for their lives in light of the Trump administration’s barrage of anti-LGBTQ policies.

The Supreme Court has recognized LGBTQ equality in marriage and employment. Yet Justice Clarence Thomas, joined by Justice Samuel Alito, took aim at a landmark case this week, signaling their intent to threaten these victories and those we have yet to achieve—especially as a number of LGBTQ rights cases may make their way up to the Supreme Court.

Latino millennials are more likely than any other ethnic group to identify as LGBTQ and Latino support for same-sex marriage continues to rise. Yet, Latinos and LGBTQ people have seen the largest increase in hate crimes, and these problems compound each other—making it harder to find a job, get access to health care, and putting them at a higher risk of poverty and homelessness. It is even worse for LGBTQ immigrants whose deportation can be a death sentence. Latinos cannot afford to go back to the days when LGBTQ people had no rights.

Like Trump, Barrett’s record is contrary to equality and threatens the LGBTQ community.

The late Justice Ruth Bader Ginsburg said it best: “Any woman will not do.” There are “some women who might be appointed who would not advance human rights.”

"Any woman will not do,” Justice Ruth Bader Ginsburg said of filling the open seat. There are “some women who might be appointed who would not advance human rights or women’s rights."#OurCourt #RBGsDyingWish #RBG #RBGRevolution #SCOTUSnominee #SCOTUS pic.twitter.com/GaWgUNOXGo

Justice Ginsburg’s replacement must view herself as a champion of all. She must ensure the Supreme Court works for everyone. She must deliver equal justice for all.

Barrett is not that nominee.

Rafael Medina is the Communications Manager at the Leadership Conference on Civil and Human Rights. Twitter: @rj_medin.