At a time when the issue of Puerto Rico’s political relationship with the United States continues to be debated by statehood advocates and non-statehood advocates, a polling analysis released Wednesday by the progressive organization Data for Progress offers new insights into what a political status vote might look if ranked-choice voting (RCV) were utilized.

The analysis, called “Puerto Rican Status Preferences: Simulating Decolonization through Ranked Choice Voting” was authored by Andrés Rodríguez Brauer, Giovanni Pagán Vélez, Edoardo Ortiz and Gustavo Sánchez. It explores the scenario of an RCV voting model for a plebiscite that included a “range of (territorial and nonterritorial) status options for voters to rank their preferences,” the analysis noted.

“We ﬁnd that statehood starts oﬀ at a lower level of support when other options are present, though ultimately it wins in each case. We’ve weighted this data to reﬂect the electorate based on the results of the November 2020 elections in Puerto Rico,” the authors wrote.

The authors also shared other key findings from their study:

The analysis included two RCV scenarios, with each one showing that statehood would be the winner of each.

In the first scenario, as the authors note, “Status quo is eliminated in the first round, while leaving in an enhanced commonwealth that would theoretically be outside the territorial status. Such an alternative has yet to be concretely defined by its advocates in the [pro-commonwealth] PPD or deemed consistent with the U.S. Constitution.” In this scenario, statehood would win 50% of the vote, with 43% going to enhanced commonwealth and 8% abstaining. 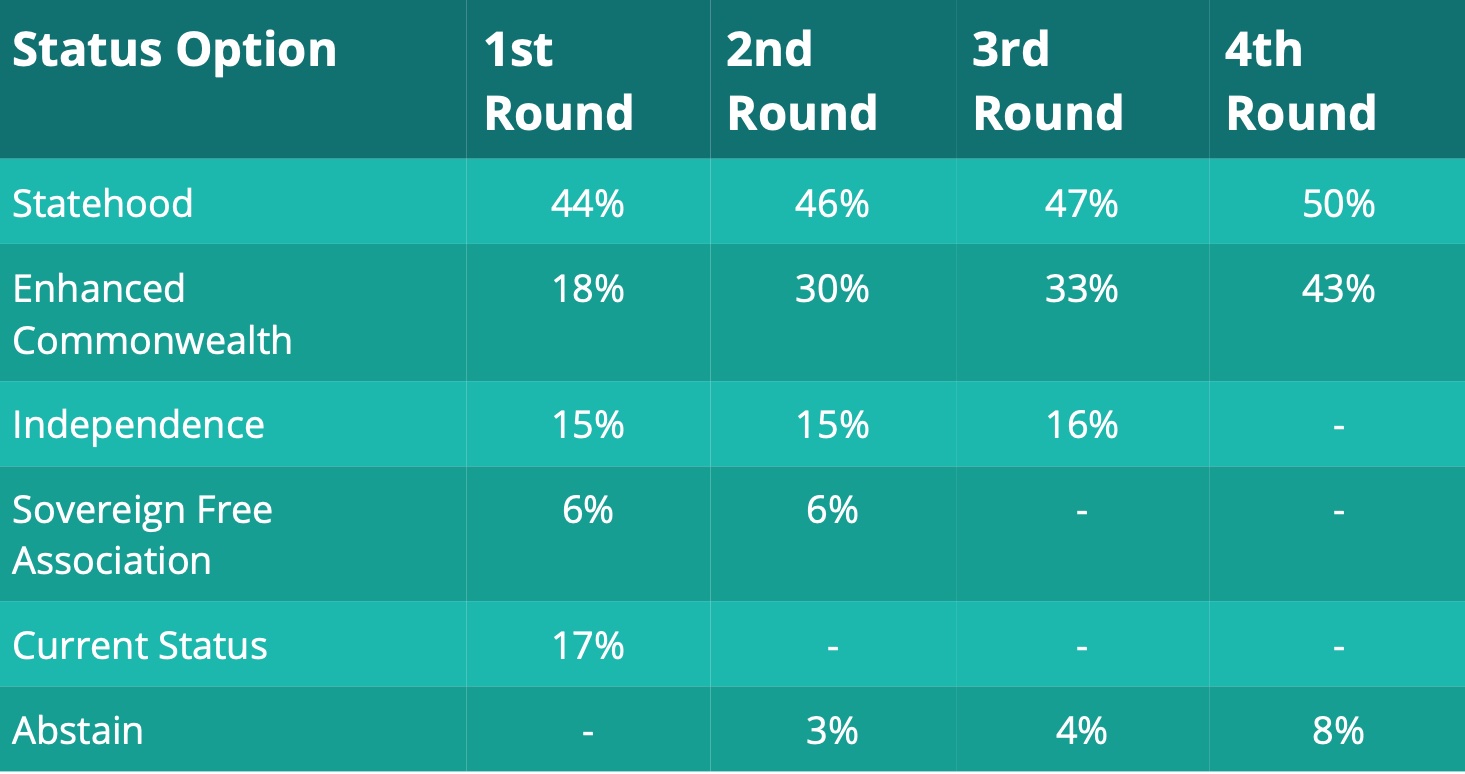 In the second scenario, the authors created a model that “where enhanced commonwealth isn’t successfully defined as a non-territorial alternative, leaving only the non-colonial alternatives as defined by the United Nations.” In this case, statehood would win 55% of the vote, with 33% going to sovereign free association and 12% abstaining.

The study’s methodology was based on a Data for Progress survey of 527 likely Puerto Rican voters using SMS and web panel respondents. The survey ran from October 19-November 1, 2020, a few days before Puerto Rico’s elections. It was conducted in Spanish and English, and has a margin of error is ±4 percentage points, according to the authors.

The full 13-page study is below:

Latino Rebels reached out to the study’s four authors via email to ask about the analysis:

Latino Rebels: What do you all see is the biggest problem in how polling has looked at Puerto Rico’s status debate over the years? What makes your analysis different?

We don’t have a big issue with previous research. We think more research is better. So far we have only really seen recent polls of Puerto Ricans who live stateside, so we wanted to encourage pollsters to actually poll current residents. Our analysis is different in that we sought to make it inclusive, balanced, and informative to all stakeholders in decolonization. We want to see less one-sided, statehood-only polls, and more polls that try to show the complexity of the view of the Puerto Rican electorate. The main issue hasn’t really been one of approach, but rather that voters in Puerto Rico haven’t been polled enough on questions of status and other policy areas of importance. Besides this, we think most other polls haven’t considered the full spectrum of opinions, including each person’s personal status preference rankings, beyond the first choice, which we believe paints a way more cohesive picture of Puerto Rico’s perspectives.

LR: If people wanted to look at other polls about this, are there others you all feel represent as nuanced a picture as yours?

The Washington Post, Diario de las Américas and Beacon Research have had some interesting recent polling on Puerto Rican status. I think ours is more nuanced given the RCV angle and the inclusion of enhanced commonwealth, but theirs is certainly illustrative of the overall first choice picture as well.

LR: In your opinion, is ranked-choice voting the best solution to get to a final decision on Puerto Rico’s status? Why? Why not?

We definitely believe that RCV would be an ideal tool for solving Puerto Rico’s status.  It allows for more nuanced opinions to be expressed, given that while many people could agree on a first choice, they could disagree strongly on the second. RCV allows us to express those differences. It also allows for instant run-offs until an option gets above 50% while allowing multiple political alternatives without delaying or distorting the process. This position is similar to [political party] Movimiento Victoria Ciudadana’s recommendations for the Self-Determination Act of 2020, though we view RCV as overall superior to a runoff. We hope that as RCV is implemented in the U.S. (NYC, Alaska, Maine, etc.) and as Puerto Rico looks towards electoral reform to recover some sense of majoritarianism, RCV could be considered as a great use case for this situation and others. In general, because PR has a multiparty system under a bicameral legislative setup, RCV could be really helpful not just for status, but for other offices. The most recent election for governor is a great example of this.

LR: Do each of you have a personal preference for Puerto Rico’s status option and are you willing to share that? Does it impact your polling or not? Why? Why not?

We all obviously have personal views, and these views don’t even always align with our friends and family, let alone inside this group. Talking about status is a tradition for us as you know! In terms of whether our views and experiences influence our polling, they definitely influence us in terms of motivation to conduct the research, but in terms of results, we strictly stick to what we think is good methodology and don’t put our thumb on the scale. We released our research after the election so that it could be as reflective of the 2020 November electorate as possible, and so that it would not influence the outcome of the referendum.

We’re committed to an inclusive, transparent, and democratic process that lets all voices be heard.

LR: What would you tell other pollsters when it comes to polling Puerto Rico? How can this become more frequent and rigorous?

This one is pretty straightforward: do more polling and hire/partner with people on the island that know the issue. Especially young folks that have new ideas and aren’t as tied down by the traditional binary of the two major parties in Puerto Rico, the pro-statehood PNP and the pro-commonwealth PPD.

It is definitely true that polling Puerto Rico is much harder than in the states. A big part of this is that pollsters don’t really have a voter file they can work with so we have to use more basic methods. A lot of credit is due to El Nuevo Día for their spot-on research and also their willingness to make information about the electorate of Puerto Rico available in a way pollsters can use. We relied on their previous research to develop our weights. If we want to see more polling in Puerto Rico, we need to generate enough interest in order for there to be more funding, but also we need better access to data because the data we currently have access to is so limited and makes research difficult. One way we could have better polling is for research first to collaborate more, share resources and expertise with the goal of providing unbiased information that moves us towards both decolonization and also short-term policy gains.

7 responses to “Is Ranked-Choice Voting the Way to Solve Puerto Rico’s Statehood Debate?”