Thousands Gather in Chicago to Honor Adam Toledo, Advocate for Change and Healing 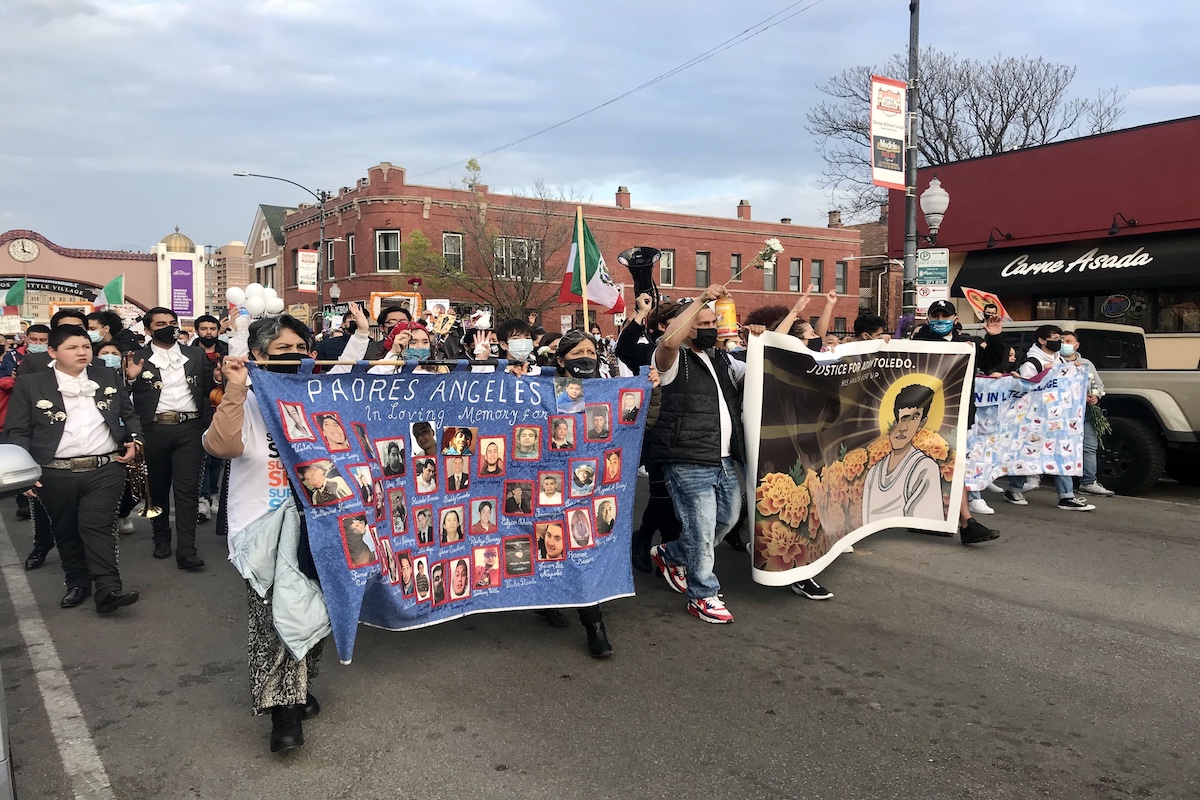 CHICAGO — Through tears, hugs, prayers and chants, 13-year-old Adam Toledo was honored this past weekend in Chicago, where thousands from all over the city poured into the streets and to his memorials to remember the teenager who was shot and killed by a police officer in March.

Toledo was shot in the early hours of March 29 near his home in Little Village on the city’s Southwest Side, a predominantly Latino neighborhood also called La Villita. According to police, officers responded to alerts of shots fired in the neighborhood. The teen and a 21-year-old man fled on foot when confronted by police, and officer Eric Stillman shot the teen once in the chest following a foot chase during what the department described as an armed confrontation.

Police said a handgun the boy had been carrying was recovered at the scene. The 21-year-old man was arrested on a misdemeanor charge of resisting arrest.

After public outcry and mounting pressure, the city’s Civilian Office of Police Accountability (COPA), released the bodycam footage of the shooting last week, which shook the city and brought further heartbreak to the Latino community and those pushing for police reform. The video shows Stillman shooting Toledo less than a second after the boy is seen dropping a handgun behind a fence, turning toward Stillman and beginning to raise his hands.

From Chicago’s North Side to the South Side, communities came together over the weekend with memorials, vigils, protests and a peace walk to demand justice for Toledo, stand with his family and call for a needed fix in the broken police system that has long hurt Black and Brown communities.

A Friday protest organized by several POC social justice groups brought thousands to the Logan Square neighborhood, where the Chicago mayor Lori Lightfoot lives. With signs that read, “Justicia Para Adam,” “We Are Adam,” “CPD Public Enemy #1” and countless others, Chicagoans embraced the collective sadness felt in the city and united to stand up to police violence.

Chicago is showing up for #AdamToledo. The Logan Square center is overflowing with people, signs and flags for justice. pic.twitter.com/co3eZNvy3u

José Almanza, an organizer with grassroots advocacy group Únete La Villita, said he has lived in the neighborhood his whole life and has never felt like police have done enough to protect his community. While holding up traffic at a major intersection, he told the kneeling crowd that it’s time to defund the police. 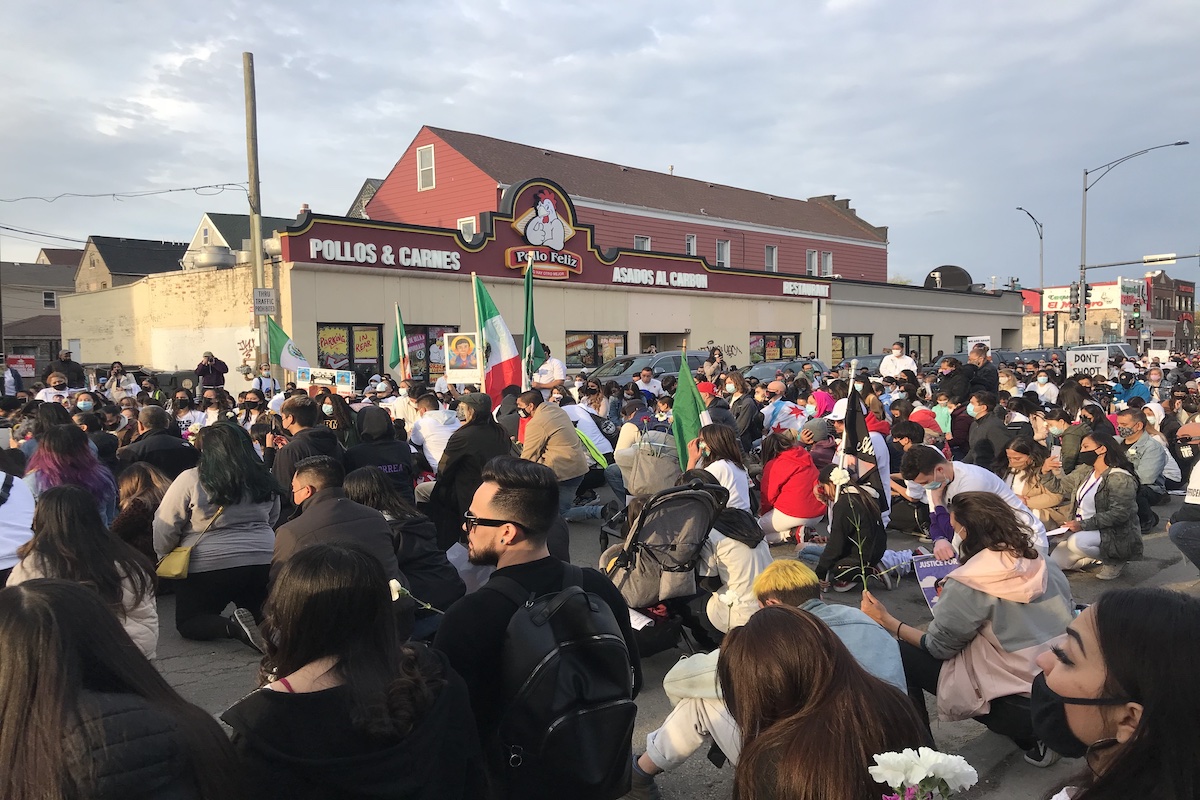 Marchers on the peace walk in La Villita Sunday took a knee and honored Adam Toledo and his family with five minutes of silence, April 18, 2021, Chicago. (Photo by Ariel Parrella-Aureli/Latino Rebels)

Dulce Rodríguez attended the protest with her two daughters and her dog Smokey. The Humboldt Park native held a Mexican flag blowing in the wind and her daughters, 5 and 12 years old, held a “We Are Adam Toledo” sign.

Rodríguez said she has experienced gun violence in her family and community for too long. She lost a cousin to gun violence last June, and one of her daughter’s father was fatally shot seven years ago. The constant gun violence that plagues some South and West Side neighborhoods is traumatizing, she said—Toledo’s death adds to that trauma, especially as a mother.

“It all hits very close to home,” Rodríguez said. “There’s constant gun violence and the police don’t help. They are supposed to be here to protect us and make us feel safe but it’s the total opposite.”

She said she attended the protest because it is important to stand up for Latino families impacted by gun violence and those killed by police, and show her daughters what unity looks like, despite the struggle.

“The only way [to cope] is honesty,” she said. “All of us are going through the same thing.” 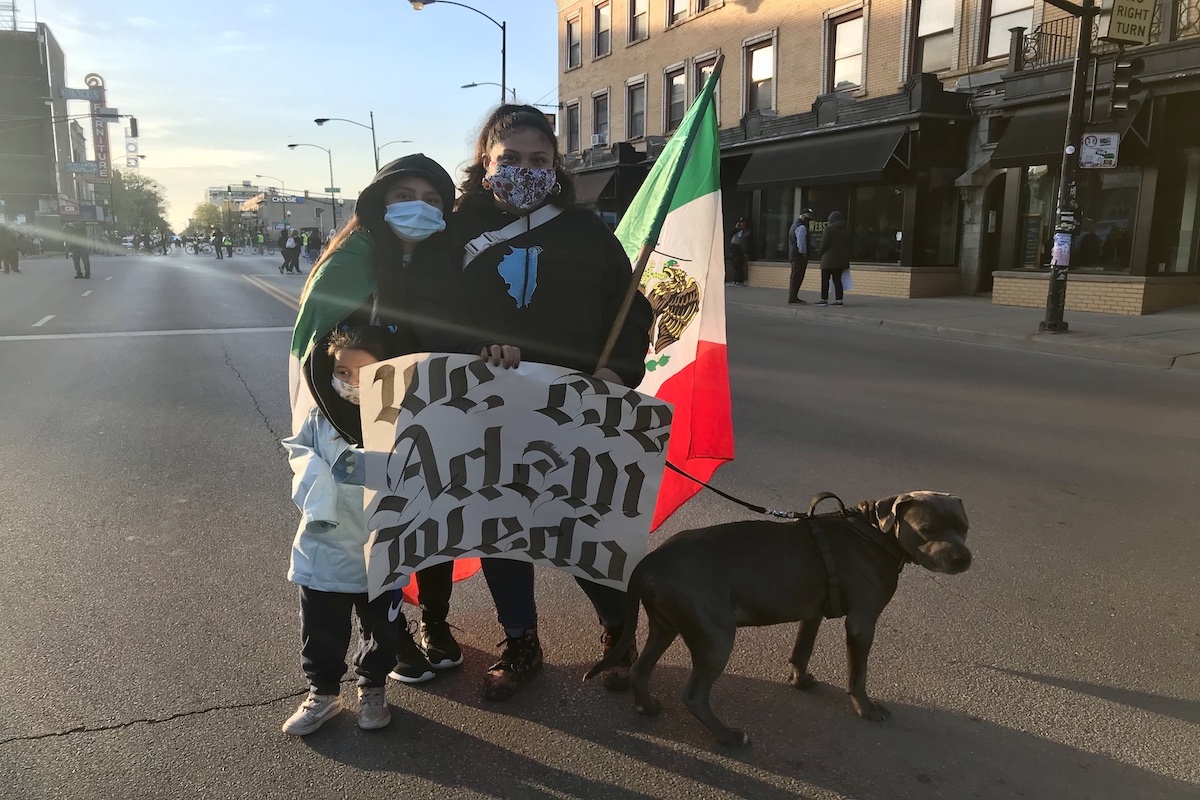 Dulce Rodríguez attended the April 18, 2021 protest with her two daughters and her dog Smokey. (Photo by Ariel Parrella-Aureli/Latino Rebels)

Rodríguez said it’s been frustrating to hear the narratives floating around excusing Toledo’s shooting and the officer’s actions, which only adds to the pain to those suffering and trying to heal from gun violence trauma.

In La Villita on Sunday, healing took the shape of a peace walk that started and ended where Toledo was shot, in an alley near a high school at 24th and Sawyer. Organized by the youth-led organization Increase the Peace, the walk included a mariachi band, Aztec dancers and about a thousand people who participated. The Toledo family was also present—the first public event they attended since the boy’s death.

Luz Hernández, who launched the Chicago chapter of Crime Survivors for Safety and Justice called Padres Angeles after grieving the death of her son in 2012 to gang violence, attended Sunday’s peace walk to stand with the Toledo family and mothers like herself who have lost sons to gun violence.

“The kids of La Villita don’t have the right to dream. It’s not a safe community for our children,” Hernández told Latino Rebels in Spanish. “The murder of our kids is not normal. As immigrants, we came here with a dream for our family—to keep fighting so they can accomplish big things.”

She said Toledo’s death hits close to home and understands the pain his family is going through. She shared a Spanish poem she wrote dedicated to all the mothers who have lost children to gun violence called “The Soul Hurts.”

After the walk went around the neighborhood, families and attendees lined up in the alley in silence, placing candles and white carnations at the memorial for Toledo, which features a mural, signs, balloons, letters, pictures and posters made by his friends and strangers. 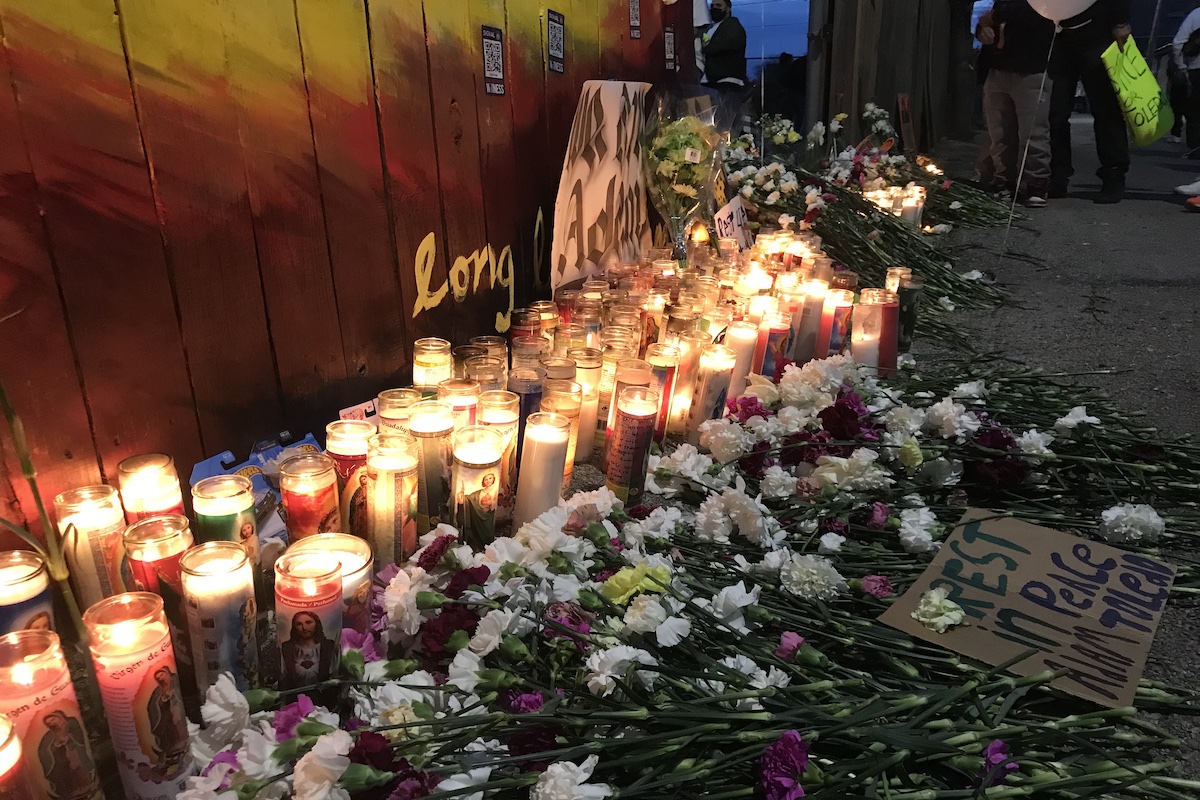 In this April 18, 2021 photo from La Villita in Chicago, people placed candles, signs and flowers at the place where Toledo was shot. (Photo by Ariel Parrella-Aureli/Latino Rebels)

On the other side of the fence, a mural that reads “We Need Each Other” was adorned with hundreds of positive messages for Toledo that people wrote after the peace walk ended.

Police critics have called for Stillman, the officer who shot Toledo, to be fired and charged, though Lightfoot and Chicago Police Superintendent David Brown have publicly defended the officer, who has been placed on administrative duties for 30 days and has still not been charged.

Whether Stillman is charged will be up to the Cook County state’s attorney’s office, which will get the COPA report after the independent board completes its investigation. Several legal experts said last week that they don’t think Stillman could be charged under criteria established by a landmark 1989 Supreme Court ruling on the use of force by police, though another said prosecutors might see enough evidence to justify an involuntary manslaughter charge and let a jury decide guilt or innocence.

Ariel Parrella-Aureli is a freelance journalist and editor based in Chicago who covers arts and culture, social justice and urban equity for local and national publications. You can learn more about her via her website, or by following her on Twitter at @arielparella.

One response to “Thousands Gather in Chicago to Honor Adam Toledo, Advocate for Change and Healing”