How a Black Journalist Fought for Capitol Press Access… and Won 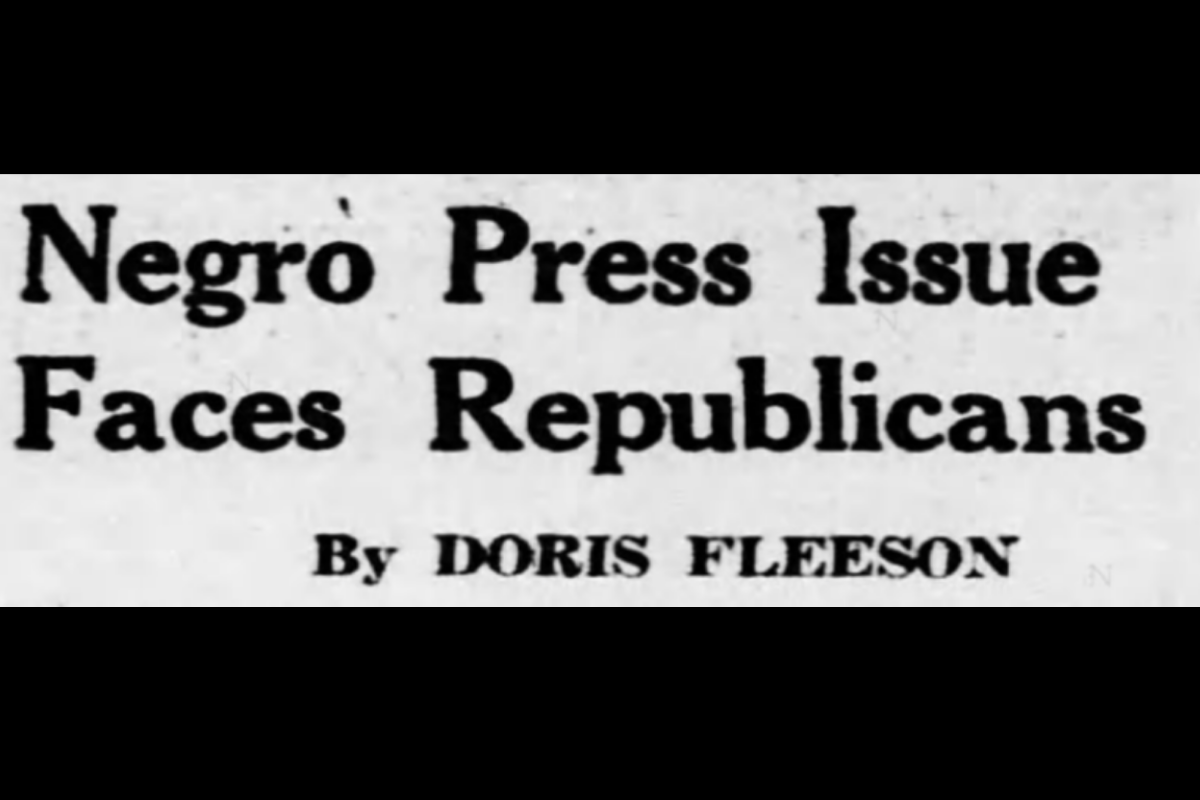 Headline from Doris Fleeson’s 1947 column in the Arizona Republic

WASHINGTON, D.C. — The year was 1947. The Black wartime workforce in the United States was transitioning back to the Jim Crow economy of bigotry and exclusion in the post-war homefront.

Enter Louis R. Lautier, a journalist-turned-aide in the War Department (now known as the United States Department of Defense) during World War II, where his assignments included removing “Colored Only” signs on the U.S. Military Academy at West Point’s campus and staffing heavyweight boxing champion Joe Lewis on publicity stops at military installations.

Lautier received the Meritorious Civilian Award two months before the end of the war in 1945 for “his assistance in the development of policies that have resulted in the successful integration of Negro civilian employees into all divisions in the War Department,” according to the caption in a photo spread featuring Lautier that ran in the Alabama Citizen.

Lautier returned to journalism soon after the war, finding work in the first year of peacetime as a Washington correspondent for the Atlanta Daily World and 16 weeklies of the National Negro Publishers’ Association News Service.

Washington was Lautier’s beat for 15 years before the war. His beat included everything from the local crime in the District of Columbia, to U.S.-Haiti policy at White House briefings, to anti-lynching legislation on Capitol Hill.

Congress was part of Lautier’s beat as early as 1927, when he covered public hearings on then-Senator William B. McKinley’s anti-lynching bill in the Judiciary Committee, reporting the brutal details of expert and eyewitness testimony.

Applying For A Capitol Press Pass

Press access to the Capitol building itself, where the House and Senate chambers are located, is restricted to journalists credentialed by one of four press galleries: Daily, Periodical, Radio/TV, or Photographers.

Press committee members have been responsible for reviewing new applicants to the press gallery since 1879. The Standing Committee that received Lautier’s application 74 years ago to the Daily Press Gallery received Futuro Media’s application for the same access just last month.

The decision on Lautier’s application was handed down at an in-person hearing before the Standing Committee of his journalism peers on March 4, 1947. It was a Tuesday. The vote was 4-1 against Lautier, with Griffin Bankcroft of the Chicago Sun the sole ally of Lautier’s case. Bankcroft had pointed out that exceptions had been made for white colleagues that could be made for Lautier as well.

The committee could not be swayed, and news of Lautier’s rejection hit the newsstands the following day. By Thursday, the 14 Neiman fellows at Harvard came to Lautier’s defense, condemning the committee for failing “to make use of a great opportunity to widen the sphere of the American press.”

Part of the column stated the following:

The committee —five reporters elected by their colleagues for two-year terms to run the galleries— relied upon the technical ground that Lautier’s main work was not done for his Negro daily, the Atlanta Daily World, but for various Negro weeklies.

This is indeed the strict letter of the law. It is well known, however, that the rules have on occasion been generously interpreted for old-timers (white) or colleagues down on their luck who need a break. It was the contention of the only dissenter to the Lautier decision, Griffin Bancroft of the Chicago Sun, that this tolerance was right and proper and should now apply as encouragement to the only Negro daily in the country and its representative.

Lauter will take his battle to the senate and house rules committees, which share responsibility for the galleries with the press itself. Negro organizations, the Congress of Industrial Organizations, and various civil rights groups are with him in the fight.

Later in the column, Fleeson wrote this:

The standing committee’s conservatism also is an old story. It is fair to add that the committee operates in a city which has not yet made up its mind what to do about segregation. The battle in the City of Washington is momentarily concentrated in its only legitimate theater, the National, which is threatened with a boycott by lending players and playwrights, including Ingrid Bergman and Maxwell Anderson, for refusing to relax its Jim Crow rules.

On March 8, 1947, four days after the Capitol press committee had rejected Lautier’s application, Lautier called upon the Senate Rules Committee to correct “this gross discrimination against the Negro press.”

THERE’S no question but that the cream of the nation’s journalistic crop is to be found in the corps of correspondents whose job it is to cover the news in Washington, D.C. […] But last week that cream turned sour […] the standing committee knows, as do Washington correspondents and anyone else who has taken a moment to look into the matter, that Lautier was banned, not because he isn’t professionally eligible, but because he is a negro […] I hope the rules committee will compel the correspondents’ standing committee to erase this blot on itself, and more important, this blot on the nation’s press.

A Minneapolis Star Tribune editorial the following day got into the weeds of the press committee’s decision against Lautier: 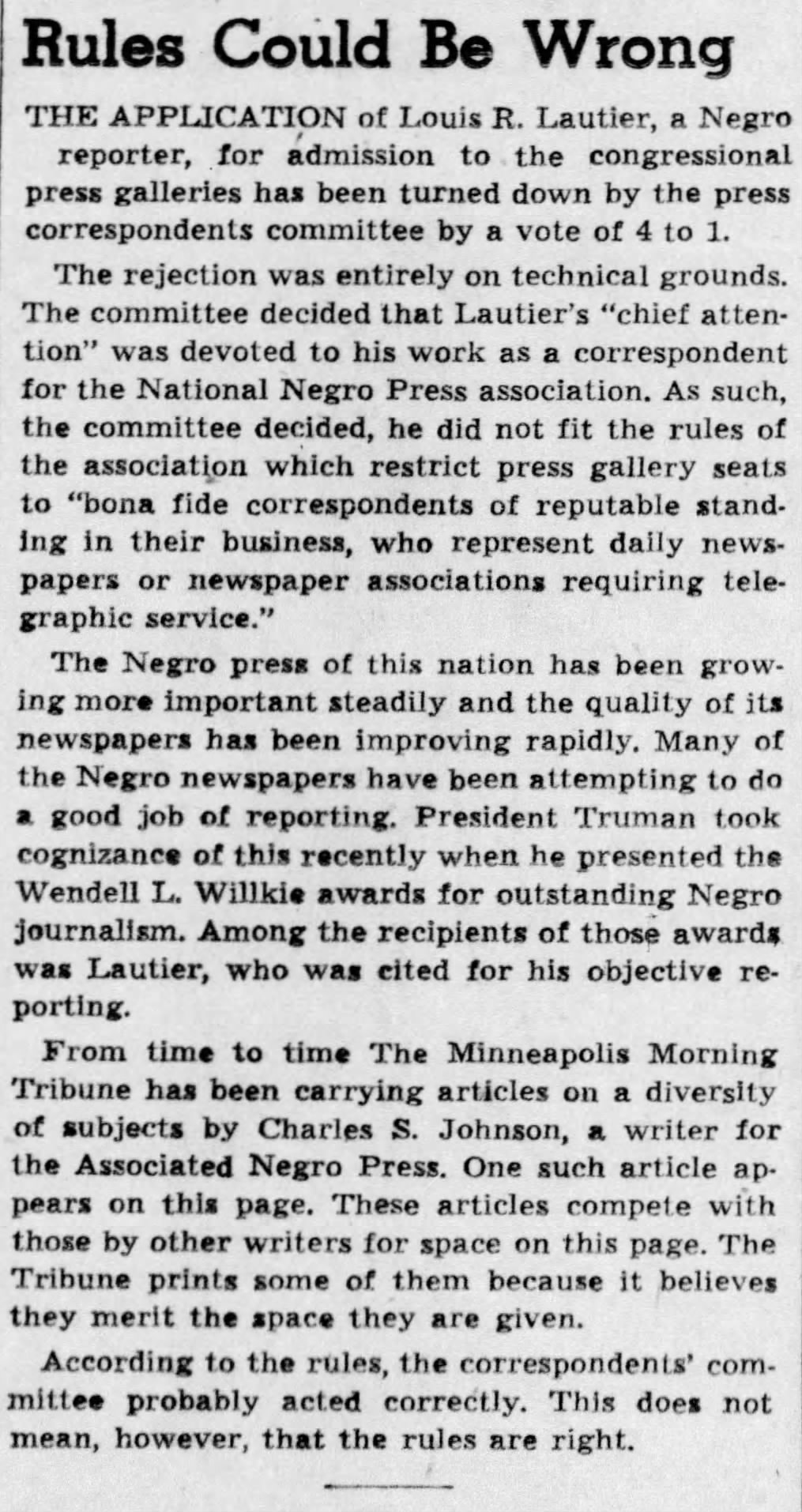 The Pittsburgh Post-Gazette followed the Star Tribune the following day, running the headline “Jim Crow Galleries” in another stinging takedown of the press gallery’s decision against Lautier. Here is a part of that editorial: 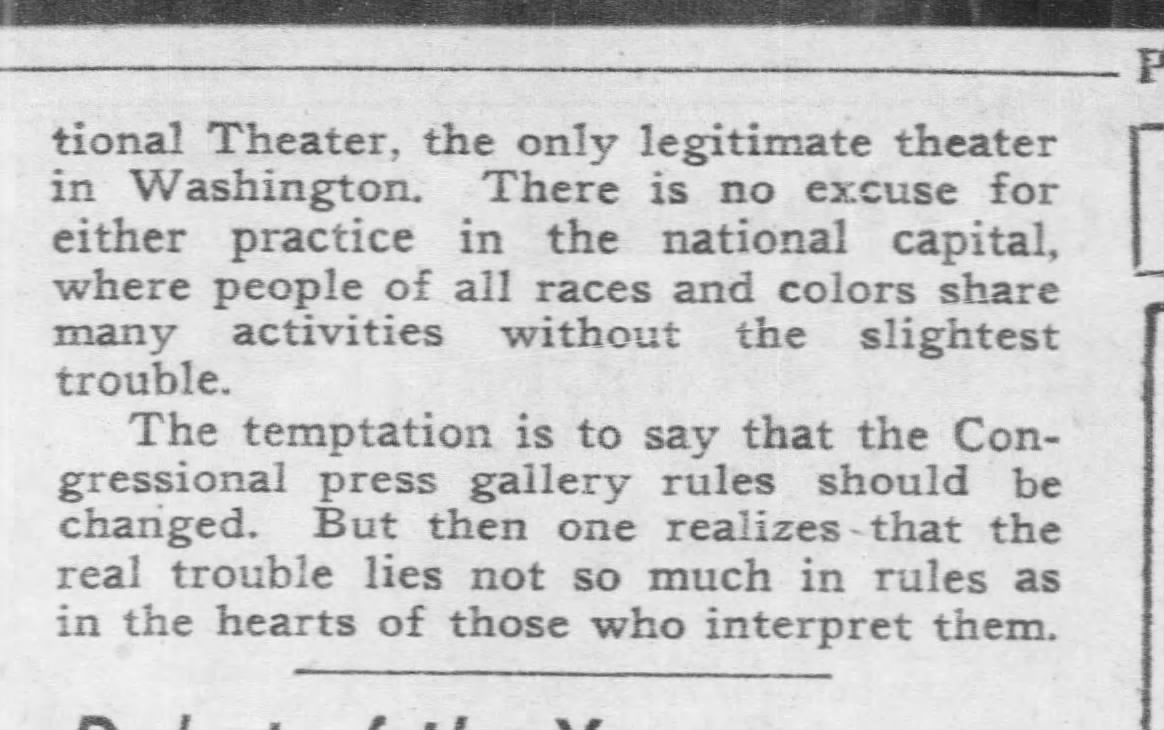 The Capitol press galleries are subject to the “direction and control” of the Speaker of the House over which rules shall be interpreted and administered by the Standing Committee of Correspondents, subject to the review and approval by the Senate Committee on Rules and Administration.

The House Speaker is Nancy Pelosi in the 117th Congress of the United States. The Senate Rules Committee Chair is Amy Klobuchar of Minnesota. Senator Brooks is Klobuchar’s predecessor in the 80th Congress.

Senator Brooks scheduled a hearing on March 15 and the rules committee voted unanimously to admit Lautier to the Daily Press Gallery. The Senate overturned the decision by the Standing Committee of Lautier’s white journalism colleagues to reject his application for a press pass.

Lautier was admitted to the Daily Press Gallery where he continued to report for Black newspapers around the country. In 1955, Lautier was the first Black reporter admitted to the National Press Club, where President Truman had commended Lautier seven years prior.

LIFE Magazine did a photo spread on Lautier now preserved on permanent display online as a Google Arts & Culture exhibit. Edward Clark, LIFE’s photographer for the shoot, captured Lautier reporting alongside white colleagues in the Capitol and White House workspaces reserved for press. 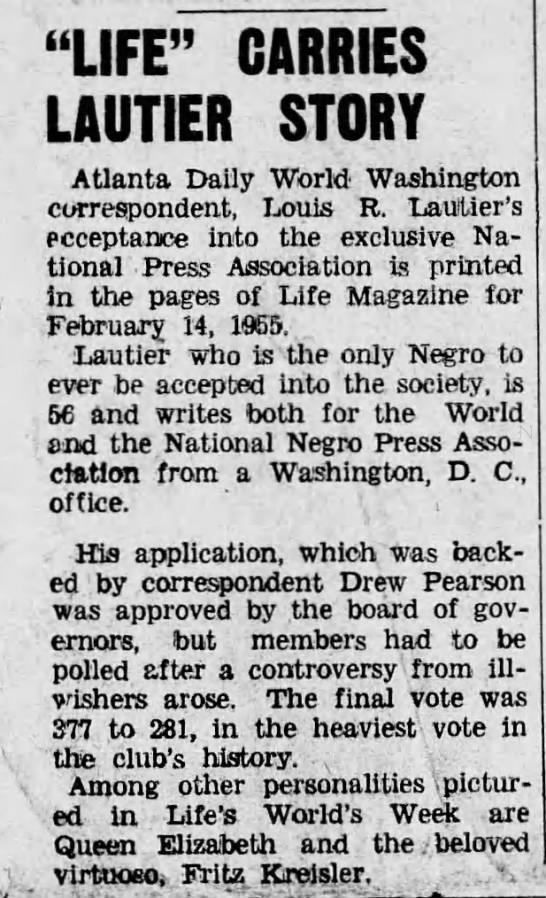 Access to these spaces in Washington for colleagues of color needs to be viewed in the context of Louis Lautier’s legacy. As outlets like Futuro Media apply for press access in the Capitol, a key lesson of Lautier’s experience is that government can overrule conscious and unconscious biases of white colleagues who deny access to journalists of color. The White House and the Senate had to intervene throughout the 1940s to bypass the biases of press gatekeepers controlling access on the most visible beats in our nation’s capital.

Pandemic restrictions have limited Capitol access to reporters and staff for over a year, but that is changing as the District of Columbia emerges from the coronavirus pandemic. Nature is healing. The Capitol’s daily workforce, including reporters, is growing.

Latino Rebels remains blocked from the Capitol while the Standing Committee of Correspondents reviews Futuro Media’s application to the Daily Press Gallery where Louis R. Lautier achieved his press pass by appealing to the Senate 74 years ago.

The Capitol press corps looks very different now than it did in Lautier’s day. Some of the best news reporters and producers on Capitol Hill are journalists of color—like Daniella Diaz and Manu Raju at CNN; Washington Post’s Mariana Sotomayor; CQ’s Ellyn Ferguson, and Nicolas Wu of USA Today.

But the credentialed Capitol press remains overwhelmingly white, especially among the credentialing committees of journalists like the ones reviewing Futuro Media’s application. The absence of outlets like Latino Rebels continues to leave a gaping void in daily news from Congress about issues that matter to millions of Latinos in the United States and abroad, but are most often overlooked by mainstream press outlets credentialed for access to the Capitol galleries.