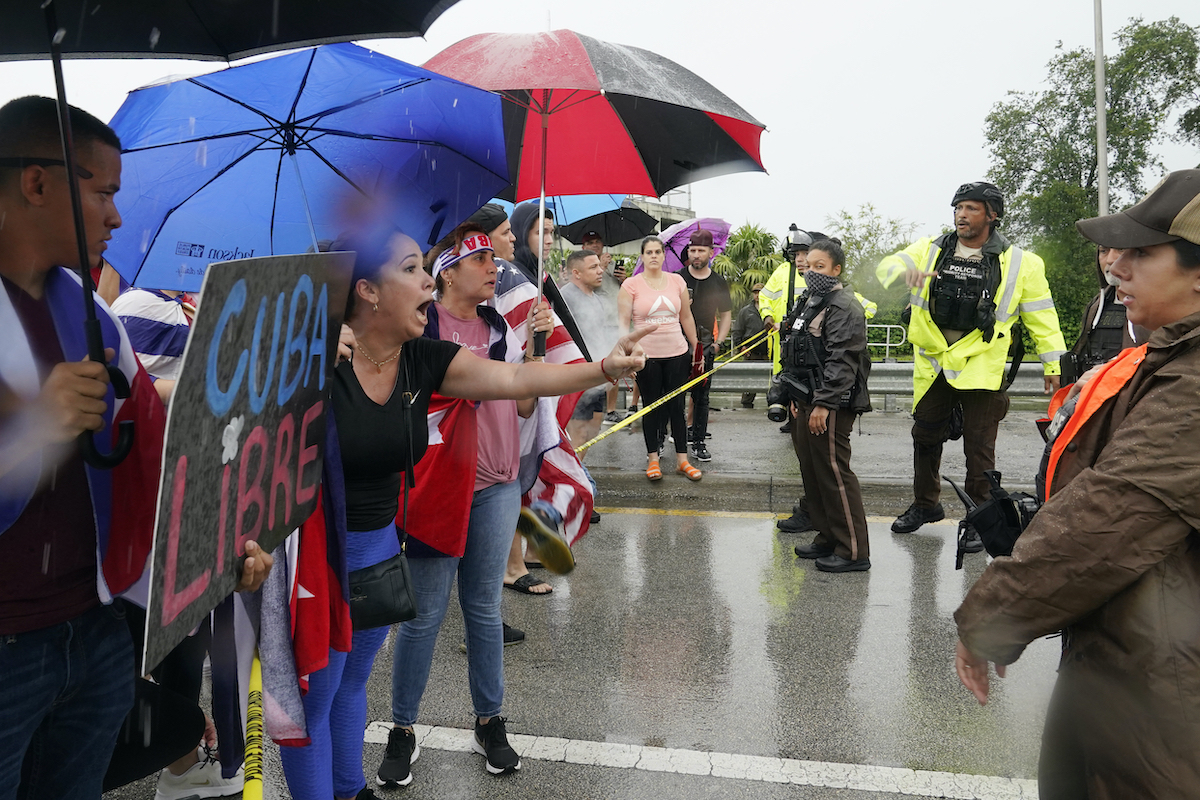 Demonstrators confront police as they try to get onto the Palmetto Expressway, Tuesday, July 13, 2021, in Miami. (AP Photo/Marta Lavandier)

MIAMI — Earlier this year, Florida’s governor and wannabe dictator Ron DeSantis signed HB1 into law, which criminalizes large protests and explicitly bans the blocking of traffic by protestors. The bill is so extreme that it actually allows drivers to run over protestors while escaping civil liability if they feel threatened.

This law was completely unnecessary. We already have laws in the books against rioting and violent behavior during political demonstrations. If I’m marching in a protest and I decide to throw a trash can into a CVS window as some form of misguided political statement, I have committed a crime. What DeSantis and the rest of his Florida Republican cronies were really after was to punish and demonize Black Lives Matter protestors who organized after the murder of George Floyd.

While the bill was debated in the Florida Capitol, Republicans admitted that there had been no large-scale riots that made this law necessary and that it would also not apply to the riots we are accustomed to seeing after major sporting events. They argued it was a preemptive measure to ward off the possibility of future riots, while infringing on our first amendment rights in the process.

Fast forward to the present: Cuban-American protestors who are demonstrating in solidarity with protestors in Cuba blocked one of Miami’s biggest highways in the middle of a busy workday, doing EXACTLY what HB1 explicitly criminalizes.

(..which would be the first such incident with Florida ‘s new anti-riot law in place… the one the Gov signed into law following the BLM protests)@WPLGLocal10 https://t.co/NGEPBRvMWX

#BREAKING – The Palmetto Expressway (SR-826) has been shut down in both directions near Coral Way and SW 32nd Street as protestors voicing their support for the people of Cuba went onto the expressway. pic.twitter.com/8cCFNmL5m7

At the same time, DeSantis was in Miami holding a press conference with Cuban dissidents, and while he has always been vocal in opposition to Black Lives Matter protests, he refused to address the protestors who violated his anti-free-speech law. When asked about it by a reporter, DeSantis did not answer the question and immediately deflected back to the protests happening on the island.

DeSantis asked about Cuban protesters right now in Miami who have shut down the 826, per a question asked. Gov signed law making that criminal.

He did not answer the question but deflected to protests on the island. pic.twitter.com/sqWC26AiuJ

Let’s be clear here, the only thing that changed in terms of the protests are the demands and who is organizing them. When it was Black Lives Matter protests, DeSantis vowed to throw the book at them and condemned them profusely but when it was Cuban protestors, it became politically inconvenient to enforce the very same law he advocated for months ago.

We now have a governor in Florida who pushes politically motivated legislation and enforces it selectively to his political convenience. This is incredibly disturbing and not how a democracy should operate. Floridians shouldn’t be intimidated from exercising their first amendment by hypocritical politicians.

This video shows the moments before demonstrators got onto the Palmetto Expressway near Coral Way to show their support for people protesting in Cuba.

To be clear, I don’t want this unjust and anti-democratic law enforced on anyone. I think that Cuban Americans have a right to protest and exercise their First Amendment rights and I would find it horrible to see them charged under HB1. I hold this position because I try to have ideological consistency and I actually believe in free speech. I don’t want to empower the government to selectively enforce laws upon its citizens based on their political beliefs, something that you would think conservatives who pretend to care about small government would agree with.

Unfortunately, their hypocrisy is obvious to any objective observer.