Organizations supporting the Self-Determination Act of 2021 (H.R. 2070) for Puerto Rico have initiated a series of nationwide actions directed at key House members of the Natural Resources Committee—details of which will be shared at a Wednesday noon press conference outside the White House in Washington, D.C.

With an October committee vote expected for H.R. 2070 to determine whether the bill can proceed to the next stage of the legislative process, organizers behind the self-determination push told Latino Rebels they have used ad buys, unveiled billboards and made 10,000 calls to elected members of Congress to support the bill.

According to a March 18 release about the act, H.R. 2070 promotes “legislation that would empower Puerto Ricans with an inclusive and democratic process to determine their own political future and relationship with the United States,” where “a status convention would be created and delegates would be elected to discuss options with federal officials, and therefore create an official, legitimate and comprehensive bilateral conversation on status.”

The focus on the self-determination bill is happening at the same time that the Natural Resources Committee is considering a similar vote on a competing Puerto Rico Statehood Admission Act (H.R. 1522). That proposed legislation would have Congress accept the results of a non-binding November 2020 plebiscite, which statehood won, 52%-48%. If formally passed, it would result in a ratification vote by the people of Puerto Rico to accept admission into the Union.

As part of the groups’ efforts, billboards were placed in six congressional districts whose members are part of the Natural Resources Committee. Here are images of those billboards that organizers shared with Latino Rebels: 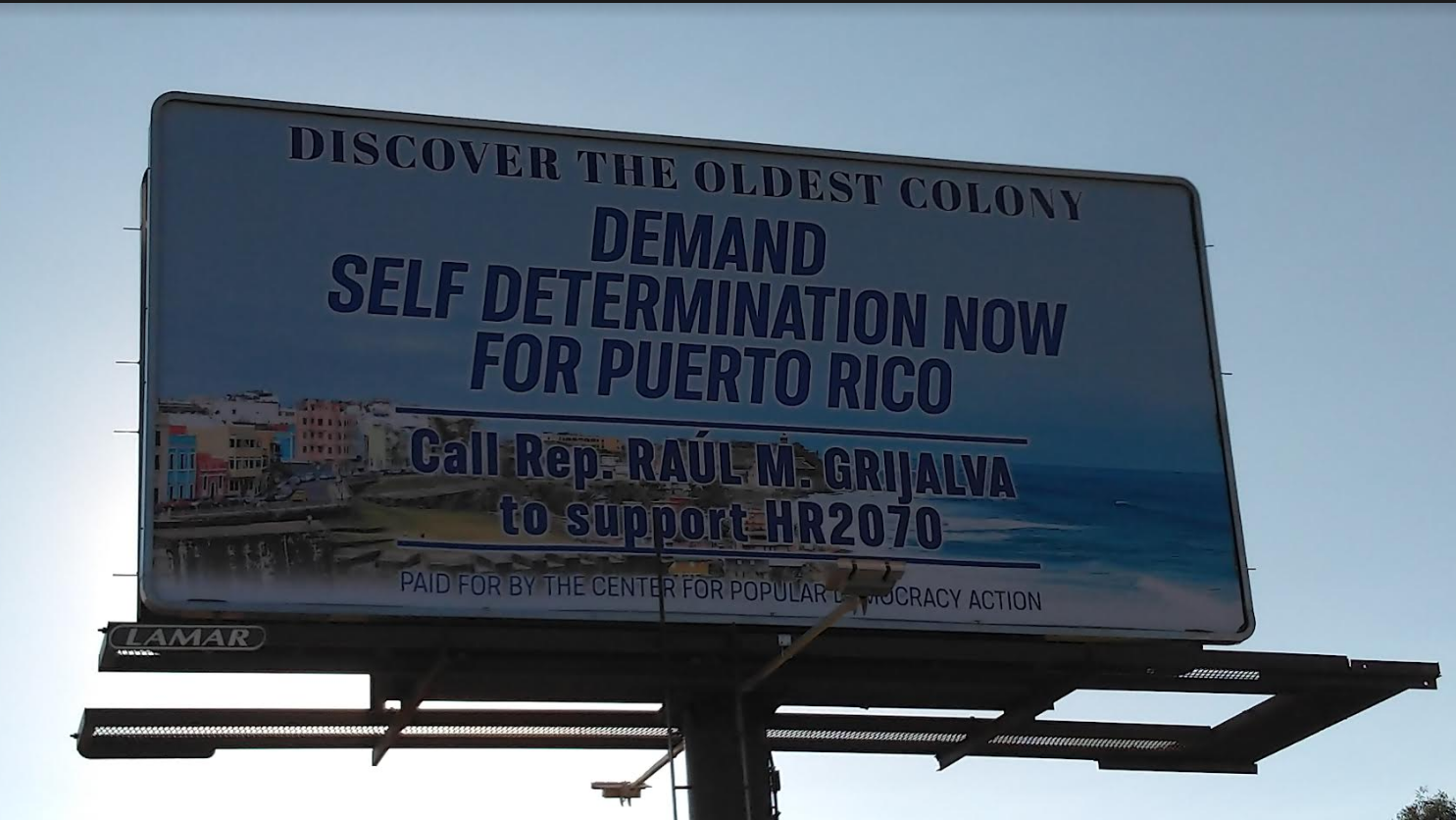 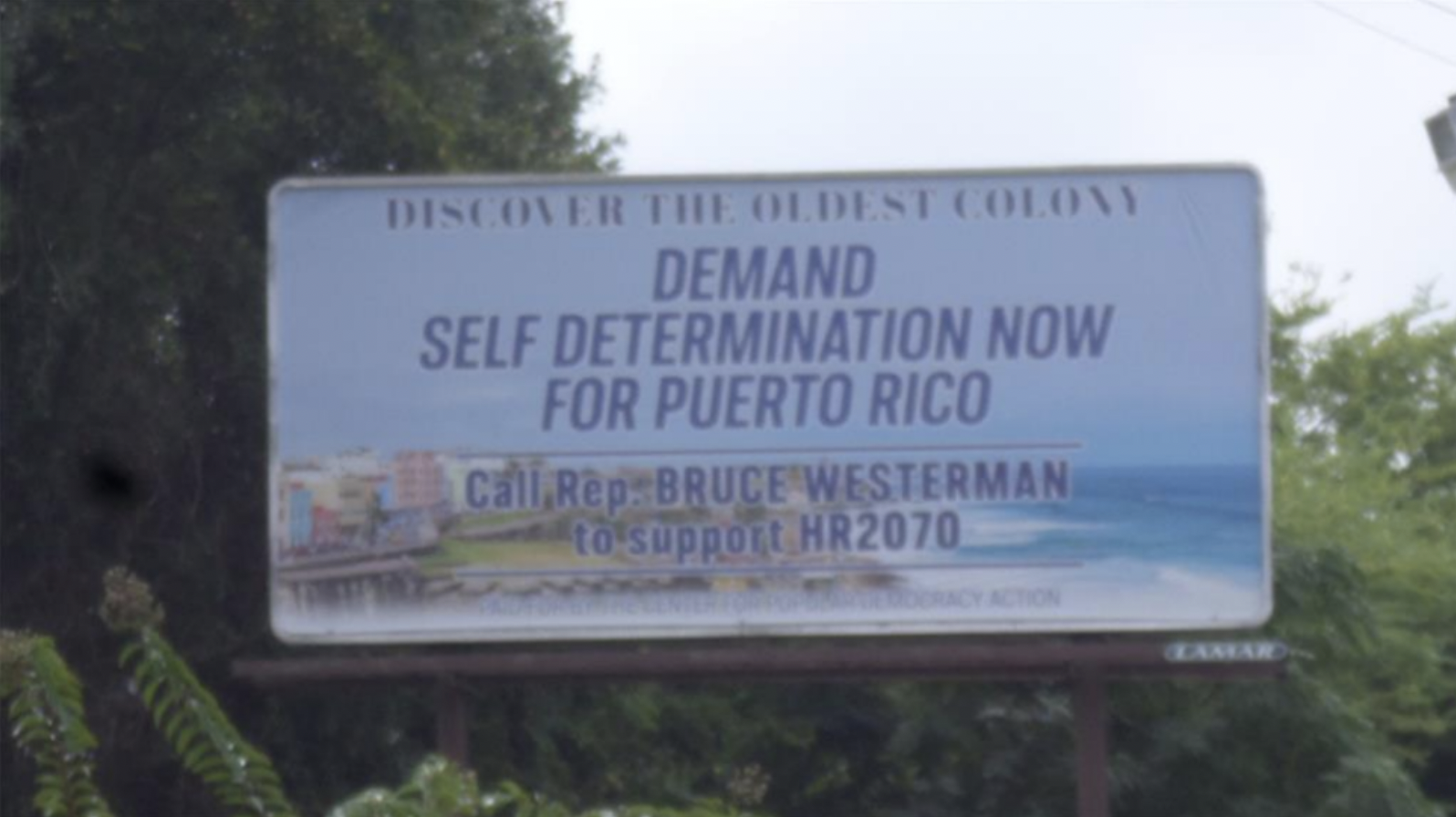 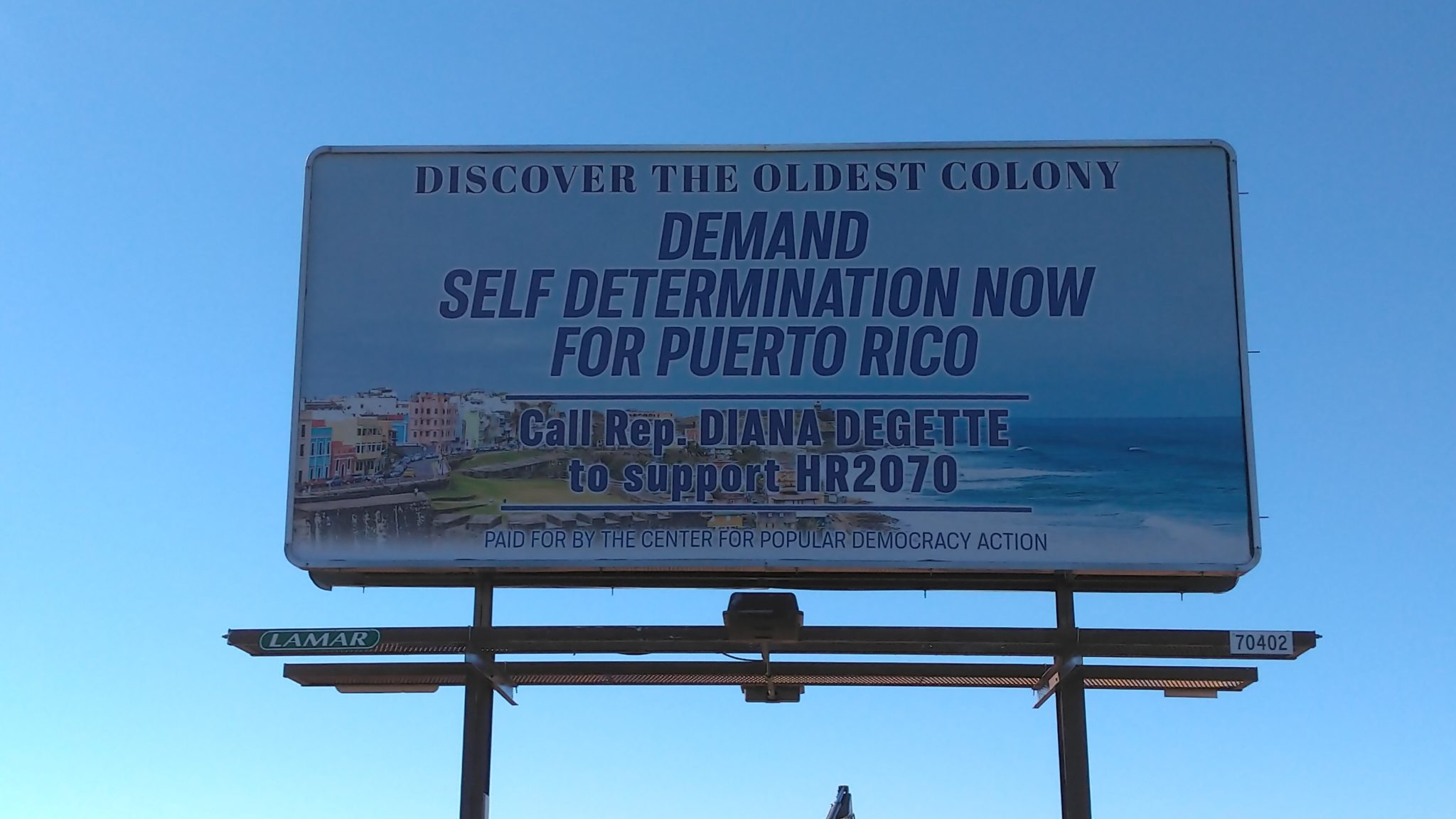 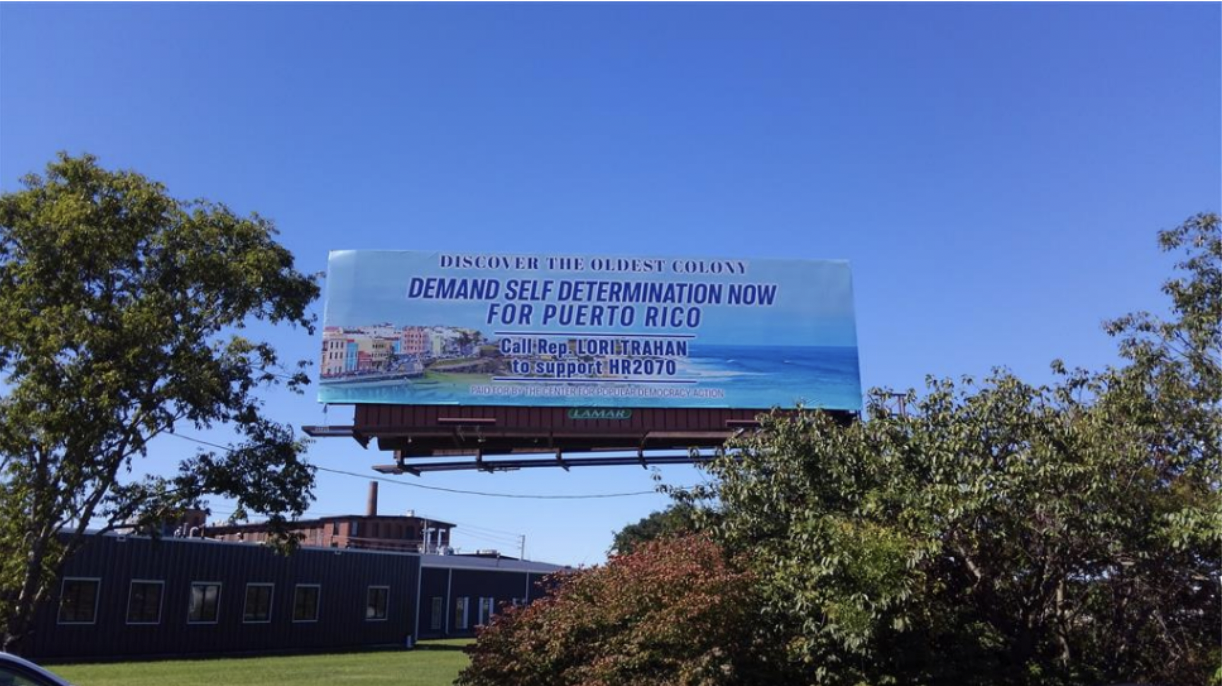 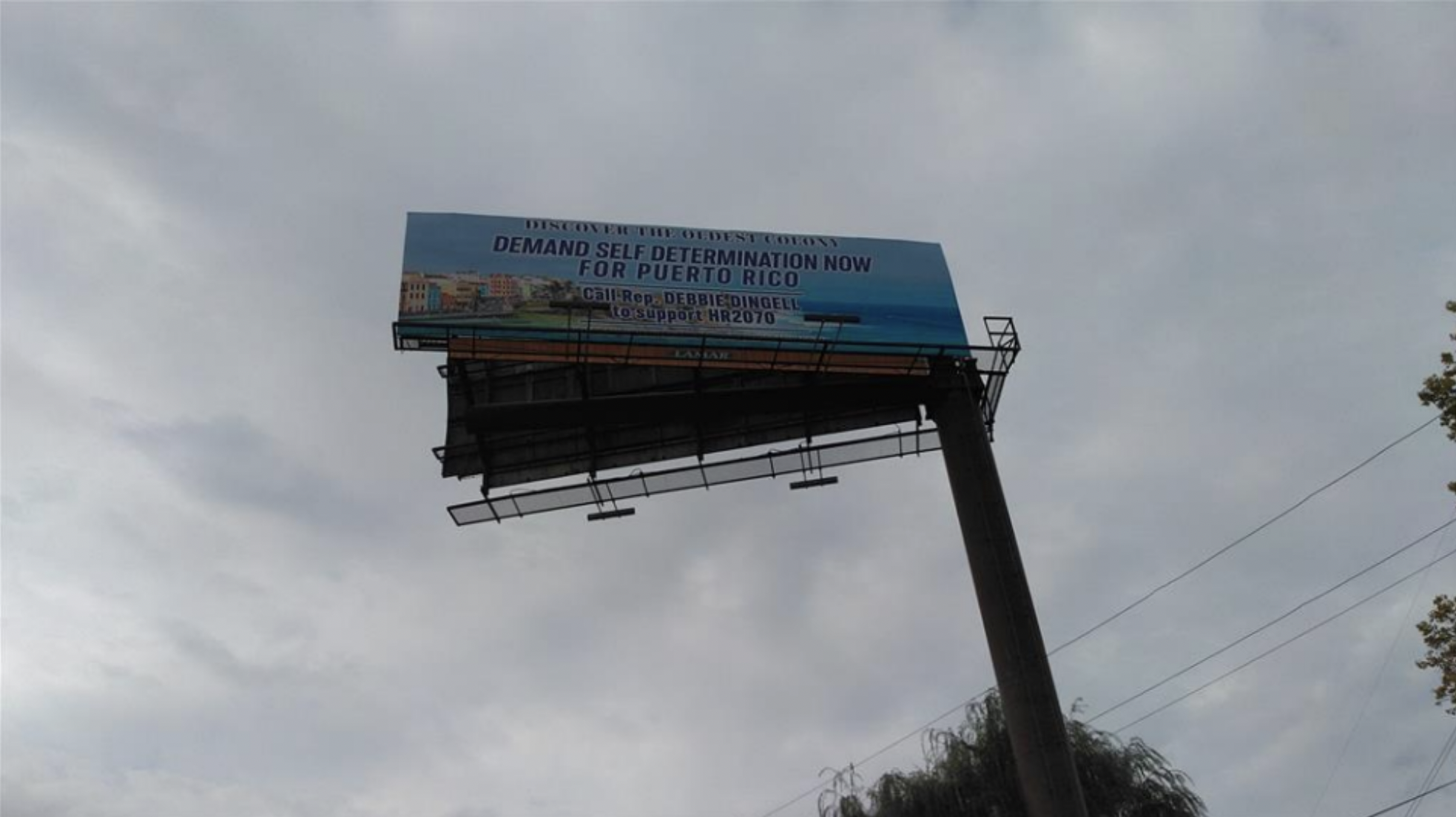 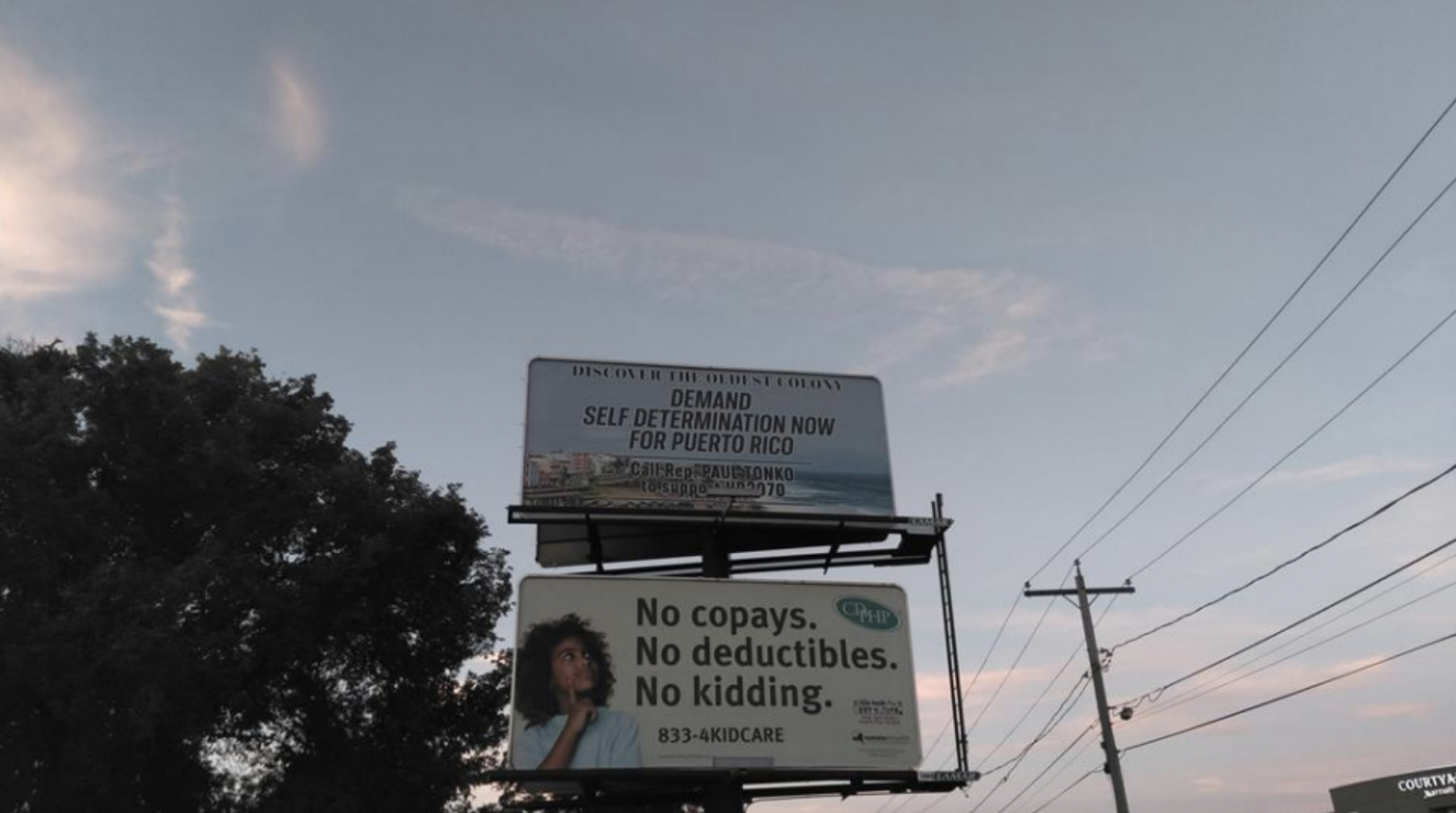 According to organizers, these committee members have either “been neutral or dismissive” of the self-determination bill, noting that the hope is to exhibit pressure on them to fully support H.R. 2070 over the competing H.R. 1522 bill.

“We want to send a reminder to all the members of the committee that we’re not only in D.C. We’re in your community as well,” Jesús González, Director of Strategic Initiatives at the Center for Popular Democracy, told Latino Rebels. “This is not a debate on status. It’s more of a way to make the process as democratic and inclusive as possible.”

“We are encouraging the members of the committee to vote for the option that’s inclusive, pro-democracy and gives Puerto Rico a fair shot at determining their fate. It’s an exciting moment. We’re hearing that both bills will be brought up for a vote and we’re hoping that the members who are undecided lean towards doing the right thing and choose the self-determination bill,” González added.

The Department of Justice has ruled both H.R. 2070 and H.R. 1522 to be constitutionally viable.

Congress should enact legislation making Puerto Ricans an offer and empowering them to trigger implementation through their acceptance (as the Statehood Admission Act would do). It must include all decolonization options (as the Self-Determination Act would do). And it must provide voters the information that true self-determination requires—as only Congress can do.

Under domestic and international law, the options are statehood, independence and a status known as free association, in which Puerto Rico’s relationship to the United States would be governed by a treaty between them. The law defines their essential features. For statehood, they include equality and representation under the U.S. Constitution. For independence and free association, they include separate sovereignty under international law.

So far, there have been no public indications that a compromise bill about resolving Puerto Rico’s status is officially in the works at the committee level.