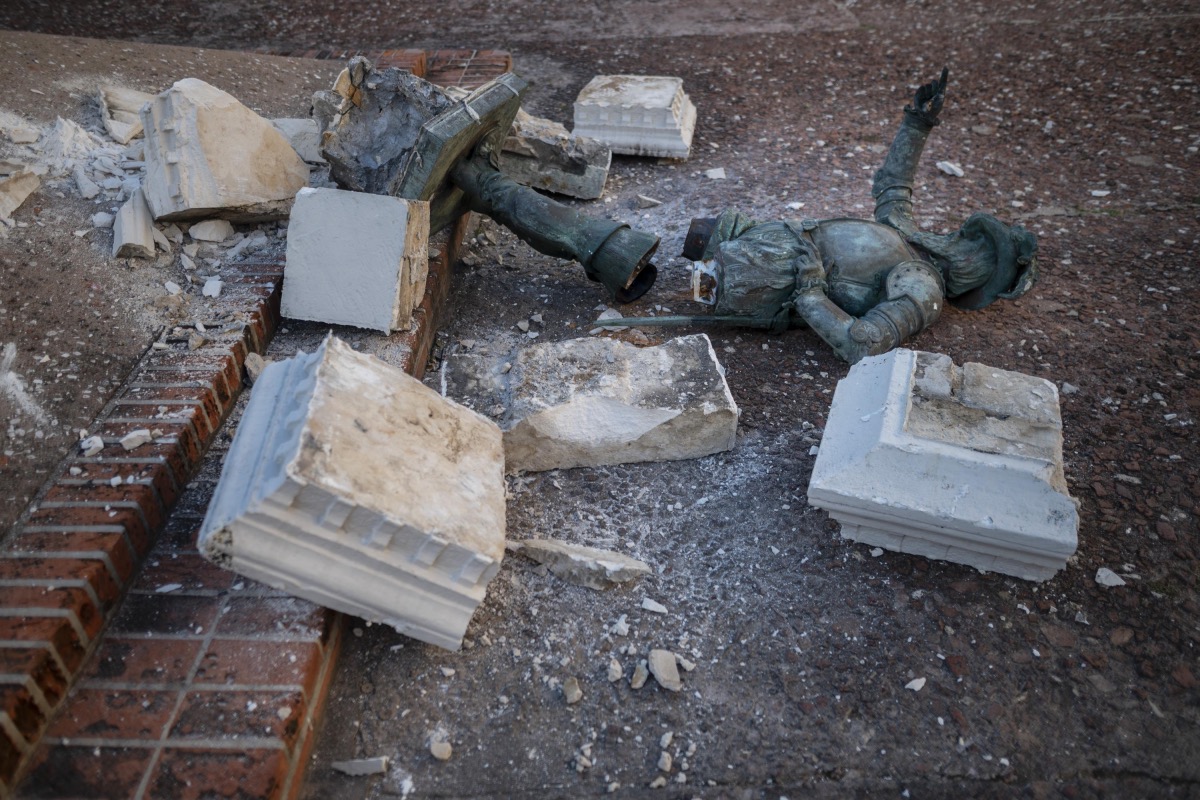 The group Fuerzas Libertarias de Borikén took responsibility for the act, citing a scheduled visit on Monday from the king of Spain and a surge of newcomers looking to take advantage of tax incentives as its motivation.

“Ahead of the supposed visit of the King of Spain, Felipe VI to Puerto Rico and the escalation of gringo invaders seizing our lands, we want to send a clear message: Neither Kings Nor Gringo Invaders; Borikén is ours,” the group said in a statement. “Juan Ponce De León, who was the first governor imposed by the tyranny of Spaine more than 500 years ago, represents the worst.”

Ponce de León was with Columbus on his second voyage when the Spanish first reached Puerto Rico on November 19, 1493. The island was known by its Taíno inhabitants as Borikén, a name now used by many Puerto Rican nationalists and advocates for independence. Last year marked the 500th anniversary of the founding of “Ciudad de Puerto Rico de San Juan Bautista” (City of Puerto Rico of St. John the Baptist)—the original name of Puerto Rico’s capital, San Juan—for which Mayor Miguel Romero had invited King Felipe VI to the city to celebrate.

“The only one who is harmed is the people because now they have to replace it and get into that level of spending and make a new sculpture,” the Mayor told WKAQ 580 AM. “In the end, instead of us using money to fill a pothole on a highway, now we have to use money to fix that.”

For its part, the group called Ponce de León “the ringleader of the crushing of our Taino ancestors who resisted under the leadership of Agüeybaná the Brave.”

Agüeybaná II was the younger brother of the island’s most powerful cacique (king) when the Spanish arrived, and later led a failed rebellion against the colonizers, in which he was shot dead.

The statue stood in front of San José Church, the second oldest church in the America’s, built in 1532 on the site of an earlier Taíno settlement—land that was then “donated” by Gov. Ponce de León, who was inititally buried there.

“The history has not been told well,” said the group, “but the generation that has had enough is coming to rescue that history and with pride we will fight like the original peoples of Borikén. We demand that Act 22 (60) be repealed immediatley and that they cancel all activities related to the supposed 500-year history of San Juan. We want Boricuas (Puerto Ricans) to begin recognizing the true history and that all the statues of Columbus, Juan Ponce De León and other tyrants be removed.”

“Freedom of expression is protected, but what cannot be protected is vandalism,” Mayor Romero told reporters after the King’s arrival in San Juan. “I believe vandalism is the most cowardly form of expression.”