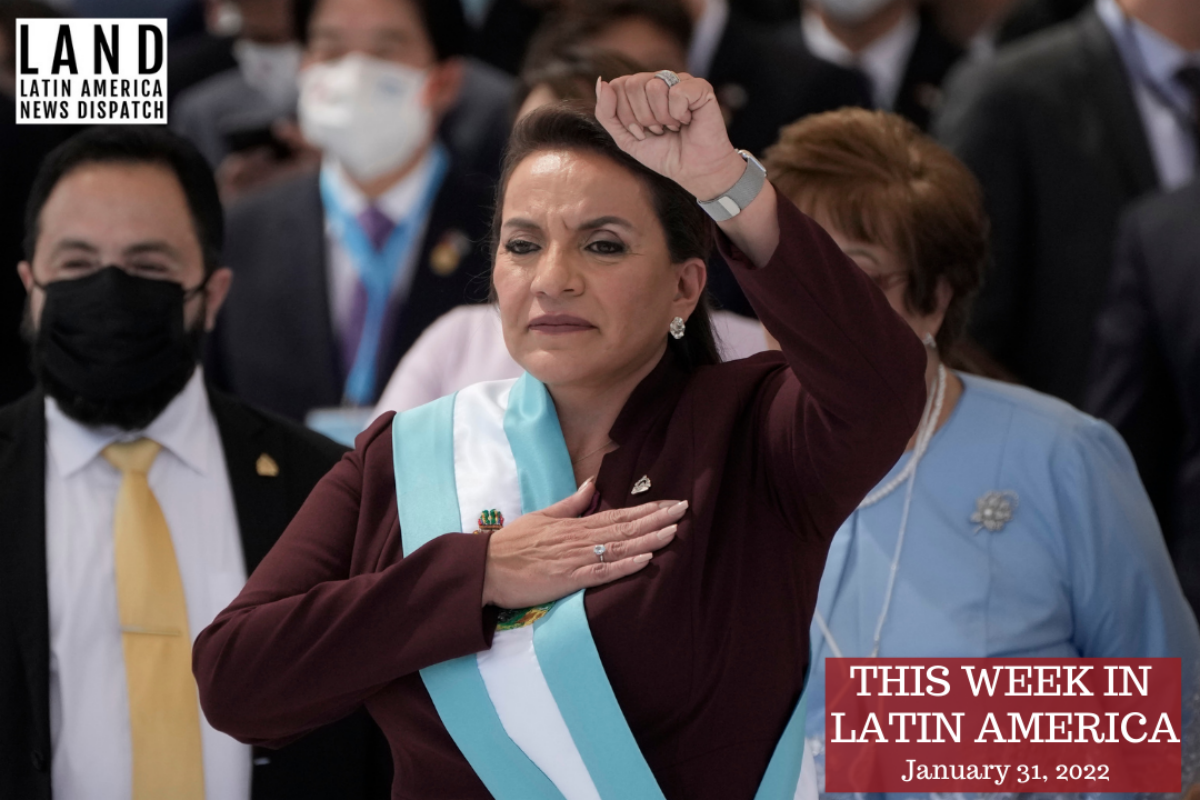 HONDURAS: Honduras’ first woman president, Xiomara Castro, was sworn in on Thursday at the national soccer stadium in Tegucigalpa. During her inaugural address, Castro expressed disdain for the outgoing administration’s “economic catastrophe.”

“We have a duty to restore the economic sector on the basis of transparency, efficiency, production, social justice, wealth distribution, and national revenue,” she said.

Among those in attendance was U.S. Vice President Kamala Harris, who met with Castro shortly after the ceremony to discuss the root causes of migration. Harris and Castro also pledged to collaborate on dismantling corruption and planned on making requests to the United Nations to establish an anti-corruption commission.

Hours before her inauguration, Castro announced her cabinet picks via Twitter. Castro entrusted former National Police Chief Ramón Sabillón with the position of security minister. Asking supporters to forget the country’s “dark past,” Castro called on Sabillón to guarantee citizens security, an end to violence and organized crime, and no more impunity.

ARGENTINA: The government announced on Friday that it had agreed on a deal in principle with the International Monetary Fund (IMF) to restructure over US$40 billion of the debt owed to the IMF.

Economy Minister Martín Guzmán said in a press conference that there would be no reductions in social spending nor required labor reforms or privatization of state companies, reiterating government promises made throughout the negotiations.

Both the executive board of the IMF and the Argentine congress must sign off the agreement, once finalized.

The administration of President Alberto Fernández has been negotiating with the IMF since 2020 to refinance the US$57 billion loan taken out by former president Mauricio Macri in 2018, the largest in the Fund’s history.

URUGUAY: Thousands turned out to a march on Thursday in Montevideo to denounce rape culture following a recent case of sexual assault involving multiple perpetrators. Demonstrators appealed for systemic changes to address the issue, such as sex education in schools and a reinforcement of the judicial system to handle cases of gender-based violence.

State prosecutors highlighted that there are only three offices dedicated to investigating sexual offenses in Uruguay. These offices are currently handling 2,800 cases, amidst an increasing number of reports of sexual and gender-based violence in recent years.

In investigations into the assault that took place in the early hours of January 23, police have so far identified four male suspects, including one under the age of 18.

PERU: A judge on Friday barred four Repsol oil executives from foreign travel while authorities investigate a massive oil spill at one of the company’s refineries. According to their attorneys, the executives do not plan to appeal the ruling and would cooperate with the investigation.

The spill occurred on January 15 when waves caused by the Tonga volcano eruption destabilized a tanker unloading crude oil to La Pampilla refinery, just off Peru’s Pacific coast. The government has declared an environmental emergency and estimates that some 11,900 barrels of oil were spilled into coastal waters.

Repsol has denied responsibility for the incident, stating that the Navy did not issue a tsunami warning and authorized the company to operate normally.

COLOMBIA: Dissident members of the former FARC on Monday killed Albeiro Camayo, a Nasa indigenous leader in Colombia’s Cauca region, according to the Northern Cauca Indigenous Councils Association (ANIC). Camayo was a founding member of the Indigenous Guard, an unarmed group of land defenders.

ANIC stated that the assailants fired on the Indigenous Guard while they defended their communities and territory. The same armed group is accused of murdering 14-year-old environmental defender Breiner David Cucuñame López and Guillermo Chicame Ipia, another Indigenous Guard member, in an attack earlier this month.

While the Colombian government signed a landmark Peace Agreement with the FARC in 2016, nearly 1,300 community leaders have been assassinated in recent years.

CUBA: The government on Tuesday released an update on the hundreds of protestors detained during last July’s anti-government demonstrations on the island. The Attorney General’s office stated that 790 persons faced criminal charges including sedition, vandalism, attacks against law enforcement, and “severe disruption of public order.”

Of the almost 800 allegedly detained, 172 have already been found guilty by Cuban courts. While the statement did not reveal details of the sentences laid down, according to observer groups, those convicted could face up to 30 years in prison.

The statement also sought to push back against accusations from some international observers that July 11 protestors had been arbitrarily detained and subjected to unfair trials.

PUERTO RICO: Unidentified protestors knocked down a statue of Spanish colonizer and first governor of Puerto Rico, Juan Ponce de León, early Monday morning, hours before the King of Spain arrived on an official visit to the island.

The statue was reinstalled in the San José Plaza in Old San Juan by Monday evening, soon after King Felipe VI had landed. Protestors gathered around the police perimeter protecting the statue to decry the reinstallation of the statue and called for it to be replaced by a Puerto Rican national hero or Taíno leader.

King Felipe VI traveled to Puerto Rico to commemorate the 500-year anniversary of the founding of San Juan.

EL SALVADOR: The International Monetary Fund (IMF) urged on Friday that El Salvador return unused funds to its treasury, and remove the cryptocurrency Bitcoin as the country’s legal tender. President Bukele made no immediate comment, except for a meme post via his Twitter account.

The IMF has become increasingly concerned with the recent drop in cryptocurrency value; however, its volatility isn’t unusual. They also expressed that Bukele’s administration should provide greater transparency.

The government has no plans to reduce its Bitcoin use for the foreseeable future, but agreed that regulations could be stronger.

Although the IMF has been critical of Bukele’s Bitcoin strategy, they commended his government on its handling of the COVID-19 pandemic, forecasting a 3.2 percent economic growth for 2022.

An attack on Wednesday against another journalist raised greater concerns among the Mexican press that little is done to protect journalists despite a government system designed to protect them.

Mexico remains the Western Hemisphere’s most violent country to report from. Apart from the recent murders and one attack, Reporters Without Borders recorded nearly 40 displaced journalists from violent regions in Mexico, making it difficult to report and inform from these areas.

UNITED STATES: Department of Homeland Security officials said that by this spring, U.S. border officials prepare to make an estimated 9,000 arrests per day at the border.

At their highest peak in June last year, migrant daily arrests averaged about 6,500, according to government reports. Many arrests included repeat crossers, which raised Republicans’ concerns about the country’s security.

Republicans see opportunities to change the balance of power in Congress as Biden’s administration struggles with border policies. Leaders of the GOP plan to make border security a major campaign topic ahead of November’s midterm elections.

GOT NEWS? Send the editors tips, articles and other items for inclusion in
Today in Latin America to latamdispatch@gmail.com.