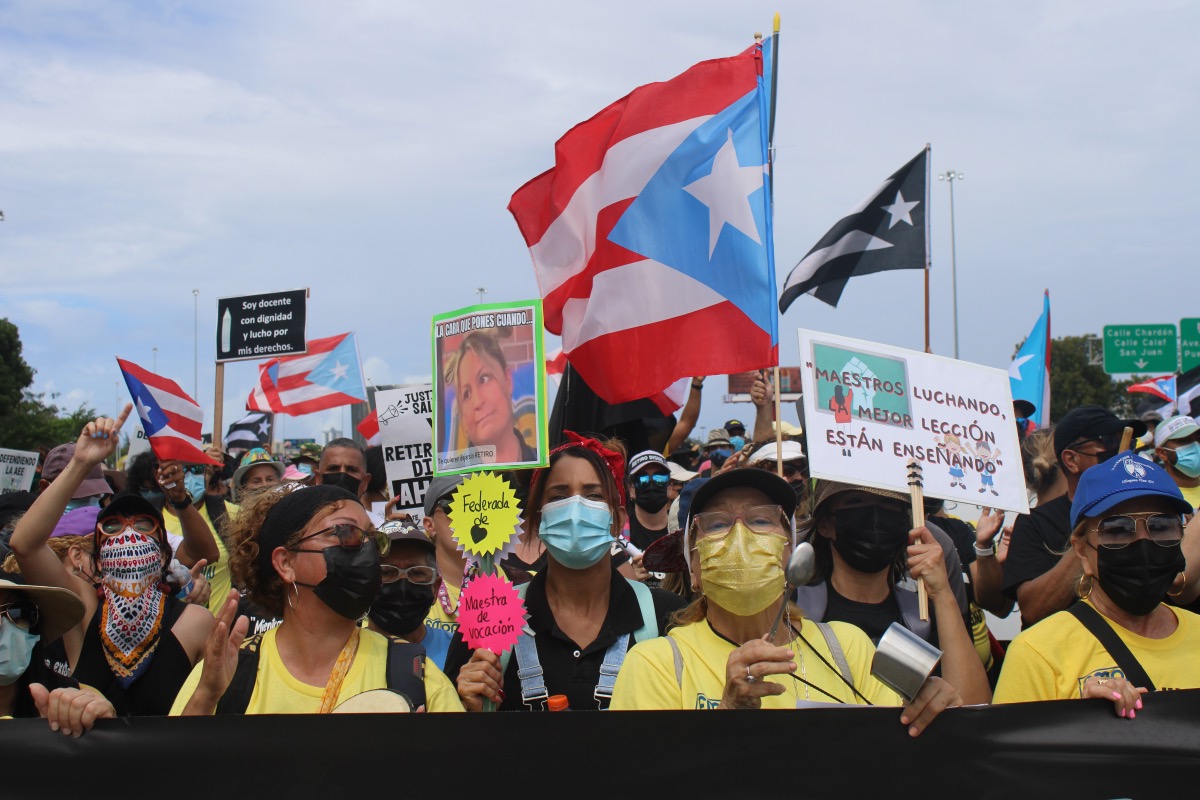 SAN JUAN, Puerto Rico — After weeks of strikes, tensions among public sector workers reached their peak on Friday, February 18, which saw thousands take to the streets to demand better salaries and pensions protections.

Beginning with public teachers in late January, Puerto Rico has experienced a wave of strikes from public sector workers. The mass absenteeism resulting from each strike has led to them being called a “flu” every time one takes place—“white flu” for striking healthcare workers, “blue flu” for striking police officers. 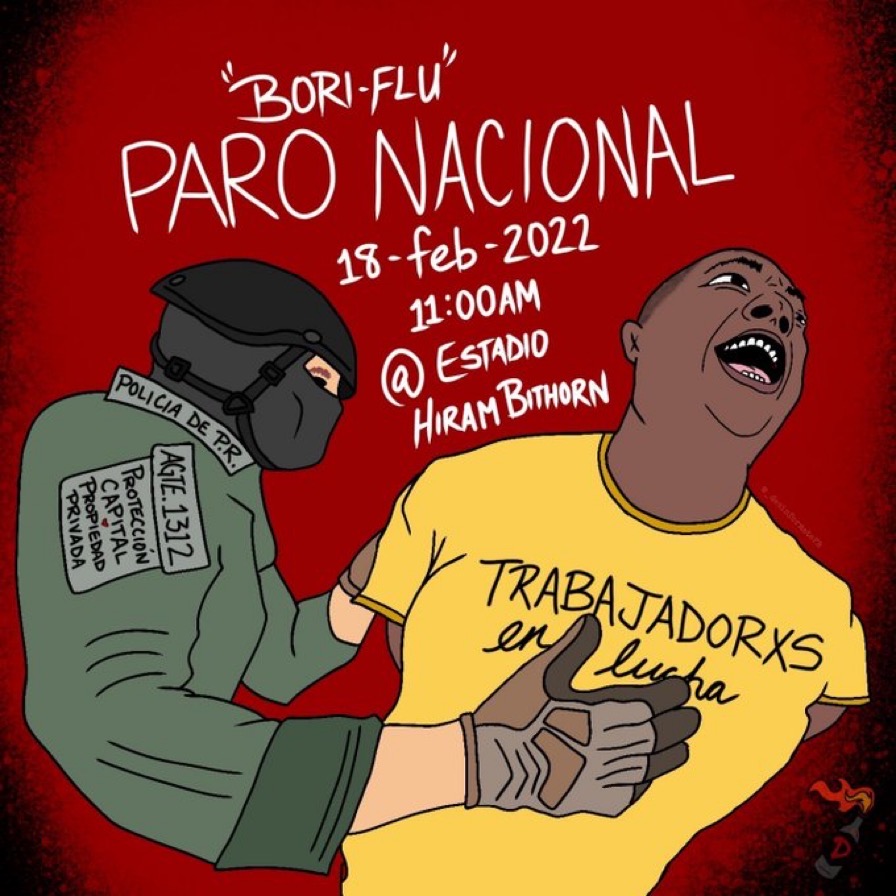 The strikes have built up to a massive number of workers going on strike in what has been dubbed the “Bori flu” —short for “Boricua flu”— last Friday. These strikes come as a response to austerity measures imposed by the Debt Restructuring Plan that is set to go into effect in March and will heavily impact public workers’ salaries and pensions.

The Bori flu began with healthcare workers and paramedics gathering early in the morning on the south side of the Capitol building in Old San Juan. At the same time, workers from the Departments of Corrections and Rehabilitation, Treasury, and Family gathered at Luis Muñoz Rivera Park. Both groups had the intention of marching westward towards La Fortaleza, the governor’s mansion.

Two hours after protesters arrived at La Fortaleza, thousands of protesters had gathered in front of the Estadio Hiram Bithorn. The protesters were mainly composed of members of the Broad Front in Defense of Public Education (FADEP) and the Electrical Workers Union (UTIER). FADEP itself is comprised of three different teachers’ unions: UNETE PR, EDUCAMOS, and the Teachers Federation of Puerto Rico (FMPR).

“PEOPLE BEFORE THE DEBT,” read A huge banner carried at the front of the march. At noon, protesters began marching towards Las Americas highway. While the police had only closed off a portion of the highway, protesters flooded into every lane and turned traffic back into the street below.

Attempts are being made to divert oncoming traffic pic.twitter.com/g5iOYg6Twg

After protesters left the highway, they marched three miles towards “La Milla de Oro,” the central business district of San Juan. They stopped at the intersection of Calle Bolivia and Highway 1, where labor leaders addressed the crowd from sound trucks. While they spoke, some of the healthcare workers who were protesting at La Fortaleza marched to join those who had left from Estadio Hiram Bithorn.

Different labour leaders from different unions are addressing the crowd right now. Will try to upload full thing later. But they spoke about the need for solidarity between workers and the need for building strike fund. Mercedes Martinez, TeachersFed president said that the… pic.twitter.com/qnO4tzxQxJ

“Protesting yields results. In a country where one week ago there wasn’t enough money for anybody, Pierluisi is now freeing up money for all of the workers,” FMPR President Mercedes Martinez Padilla told the crowd. “We deserve it and we deserve even more. That should make it clear that if we press hard we can get a complete victory.”

At night, “Jornada: Se Acabaron Las Promesas,” a group that organizes to push the federally-appointed Financial Oversight and Management Board for Puerto Rico (FOMBPR) —colloquially known as “La Junta”— out of Puerto Rico, organized a demonstration that was half-protest, half-concert.

Puerto Rico’s flu strikes began the first week of February when public teachers organized a “teachers flu” that led to over 4,500 teachers being absent from their schools. The week was capped off by protesters flooding into La Fortaleza at the same time that teachers’ union representatives met with Gov. Pedro Pierluisi’s assistants and assessors. The Department of Education later reported that only 28 percent of public school teachers were present at their schools that day.

Faced with pressure from the teachers’ unions, Gov. Pierluisi announced that he would use temporary federal pandemic funding to match the pay raise offered by the FOMBPR’s Debt Restructuring Plan to raise teachers’ base pay by $1,000 per month. The pandemic funding is set to run out in 2024, which led multiple teachers to see it as a temporary bonus. 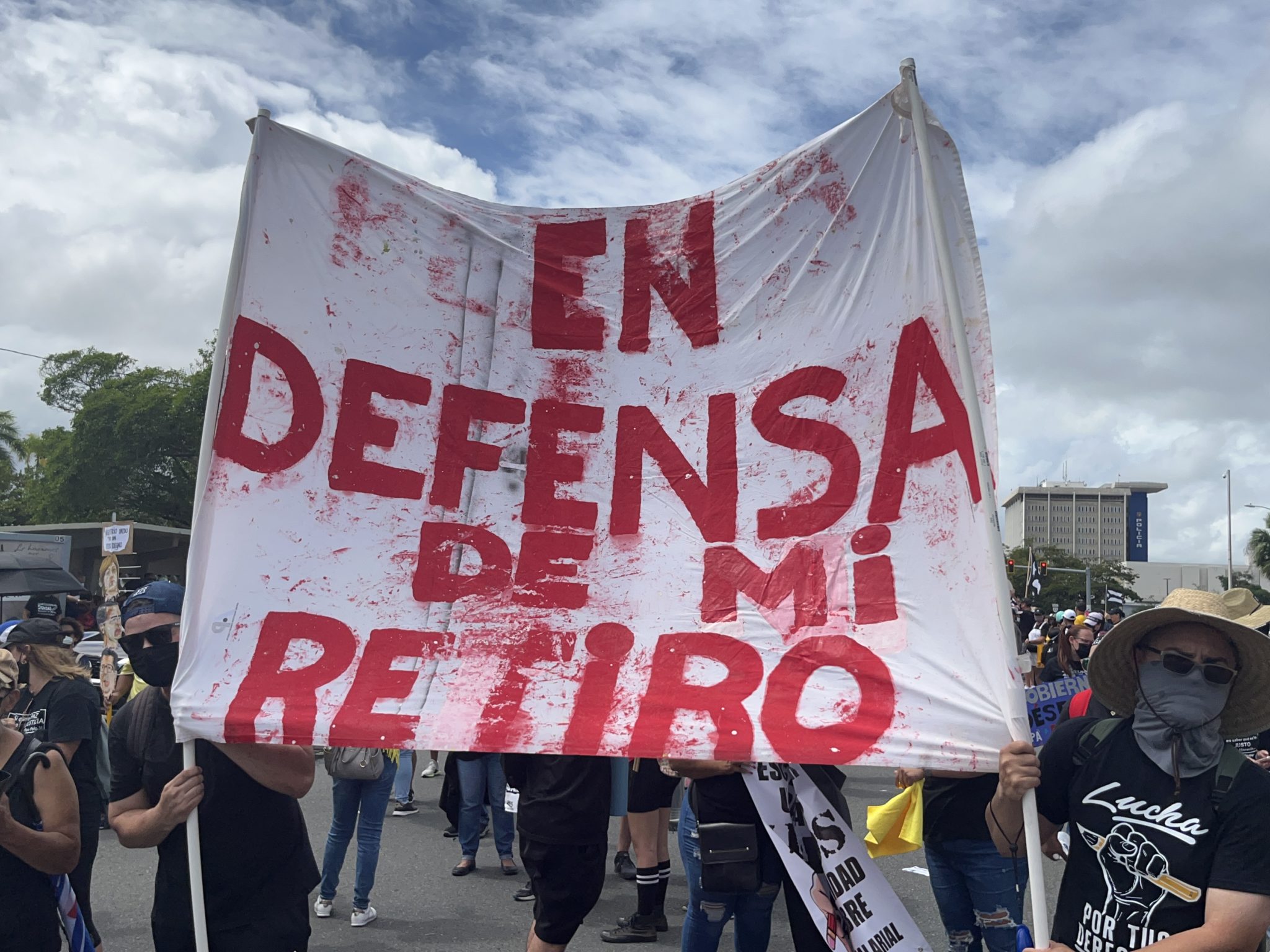 “In defense of my retirement,” reads a sign during the “Bori flu” national strike and protest in San Juan, Puerto Rico, on Friday, February 18, 2022. (Carlos Edill Berríos Polanco/Latino Rebels)

“When one does not agree with the pay they have, with some conditions, one protests and complains, but never gives up on their duty,” Gov. Pierluisi told the press when questioned about the striking workers. “No one here is obligated to be neither a cop nor a firefighter, but the person who dedicates themselves to that vocation has to assume that great responsibility. And if for whatever reason they question if they should keep doing it, whether because the pay they get is not what they expected or because their working conditions aren’t what they expected, they’re not obligated to stay in that position.”

Gov. Pierluisi’s remarks only further enraged the striking workers. The same day, firefighters declared they would go on strike, dubbed the “red flu,” which led to around 85 percent of firefighters not showing up to their posts. 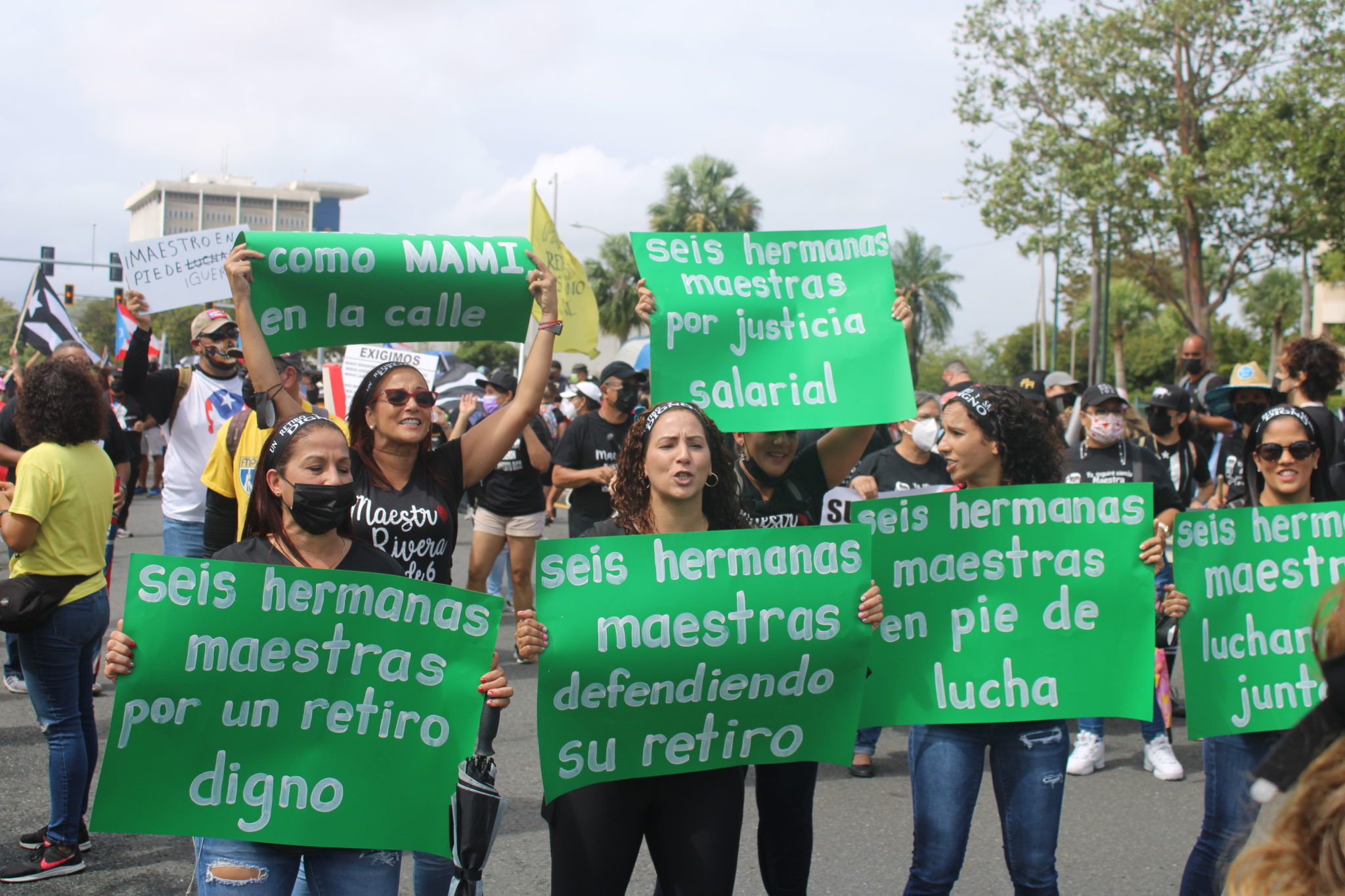 On Wednesday, February 9, teachers’ unions held another protest where they once again marched on La Fortaleza. Thousands of protesters wound their way into Old San Juan, including firefighters accompanied by a fire engine. The Department of Education reported that only a little more than 18 percent of teachers reported to their schools that day.

After the protest, Gov. Pierluisi announced he would give firefighters a $500 base pay raise and assure that the teachers’ $1,000 temporary raise would become permanent. He also created a working group composed of teachers’ union representatives and government officials to create laws that would protect teachers’ pensions.

“I cannot please everybody,” the Governor told El Nuevo Día. “I cannot please everyone who wants an increase or additional funding. This is not how it works. We have limited funding, but I’m focusing on the essential areas to the government: security, education and health.” 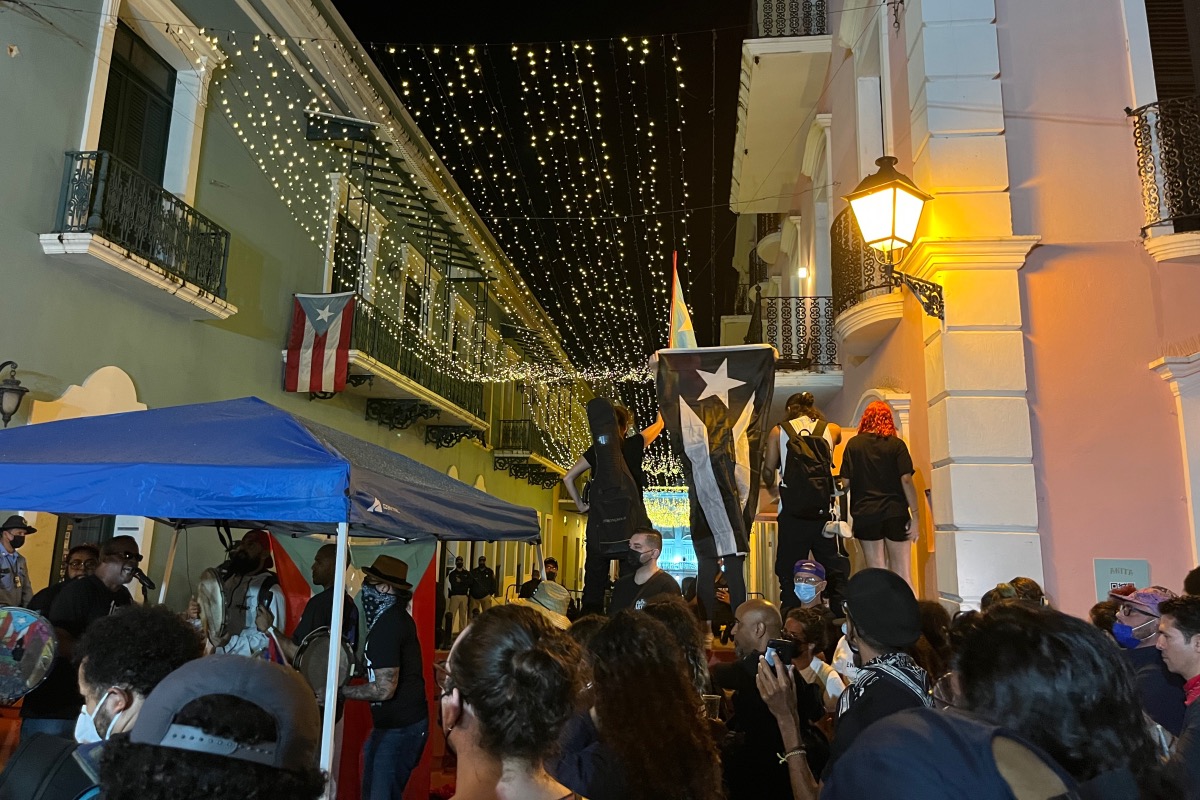 Gov. Pierlusi assured that he would use funds from The American Rescue Plan (ARPA) to raise healthcare workers’ base salary by 30 percent. Much like the public teachers’ salary raise, the ARPA funding is only temporary, available until 2026.

Many protesters from across the different striking public sectors remain firm that they need to continue putting pressure on the government through strikes and protests in order to ensure their raises become permanent and their pensions are protected.

Workers have warned that, should the Debt Restructuring Plan go into effect on March 15 as scheduled, a “wave of resignations” could follow.