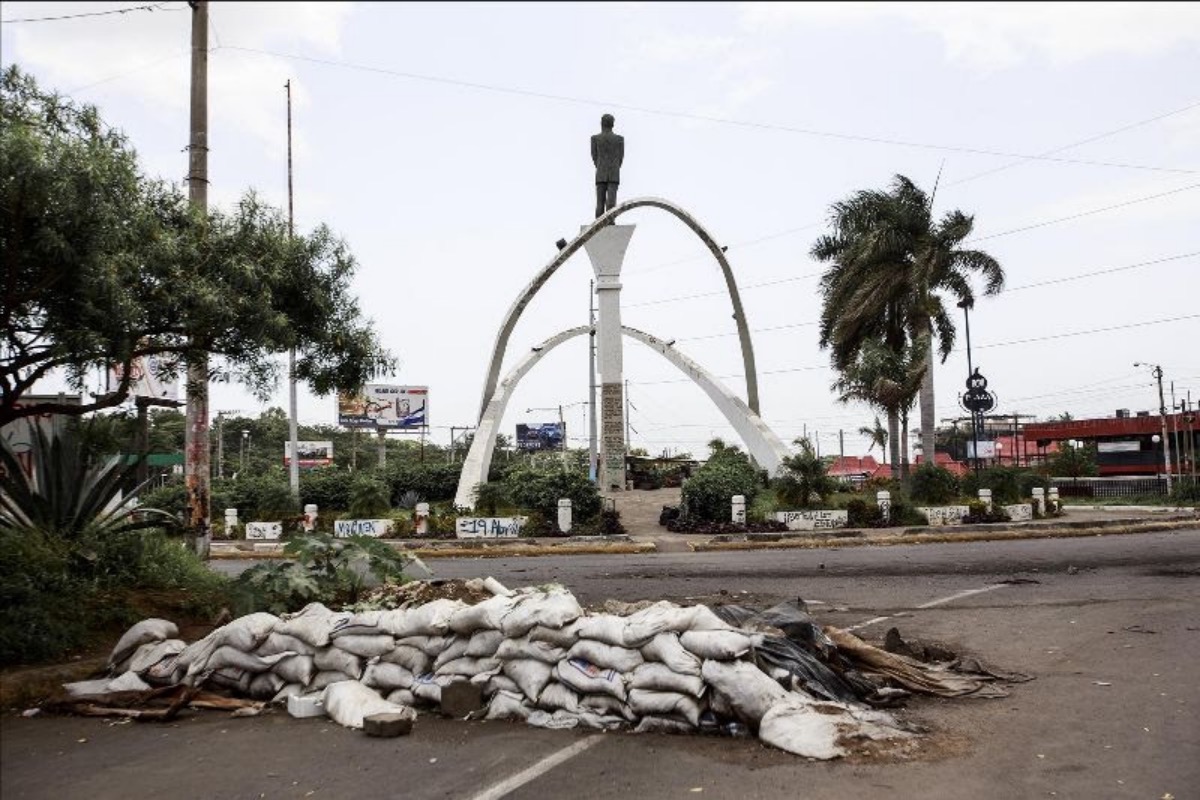 The Rigoberto López Pérez Roundabout near UNAN-Managua became a battlefield between police during the 2018 protests. (Fred Ramos/El Faro)

Nicaragua, in Brief: On the fourth anniversary of protests in 2018 and the ensuing brutal repression, the opposition seems unable to find a response to the imprisonment of its key leaders and the kidnapping of the electoral process. But the Ortega-Murillo government’s weaknesses are also evident, as shown by recent internal divisions in the Sandinista party. Given the failure of international pressure, a future democratic opening may rely on the eventual implosion of the regime.

More than 300 protesters were killed in Nicaragua in April 2018. The repression of a demonstration against a pension reform ignited an anti-government movement that unified students, campesinos, business leaders, and the Church in a way unseen during Sandinista rule.

Four years later, the streets are empty. Seven presidential candidates and dozens more opposition leaders have been imprisoned. At least 150,000 Nicaraguans have fled to Costa Rica and a record number crossed the U.S. border last month. At least 100 journalists live in exile for fear of imprisonment or other threats, and more than 165 civil organizations have been banned.

Public protest could lead to imprisonment, but social discontent still seethes under the surface.

“Every year that the civic resistance survives despite the persecution, the closure of all democratic spaces, and the exile and imprisonment that the regime uses, it’s another year that Ortega and Murillo feel threatened,” Alexa Zamora, member of the opposition coalition Unidad Azul y Blanco, told El Faro English. “Undoubtedly these anniversaries of the social unrest of April 2018 bring nervousness and paranoia within the regime, which makes them react increasingly violently against citizens.”

This year’s anniversary comes as rifts in the Sandinista party are clearer than ever. Just weeks ago, the ambassador to the Organization of the American States (OAS), Arturo McFields, resigned during a public session, and in glaring defiance of the regime, he called on other public servants to follow suit.

Days later, U.S. lawyer Paul Reichler also resigned after more than 20 years of defending the government in the International Court of Justice in the Hague. “I don’t know what made you change, but you are no longer the Daniel Ortega I respected and admired so much,” he wrote in his resignation letter published in Nicaraguan outlet Confidencial.

Members of the “Historic Sandinista” movement, referring to a faction of Sandinismo that has belonged to the party since the 1970s and 1980s and is generally loyal to Ortega more than Murillo, told Divergentes earlier this month that they were displeased with the government’s treatment of political prisoners, handling of the pandemic, and lack of plans for economic recovery.

They aren’t isolated cases. On April 11, a bishop from Matagalpa told video production company Mosaico that “in spite of the fact that they can’t speak out,” many Sandinistas —as many as thousands, including police and military— who speak to him “know the truth.”

On April 2, Sandinista member Sandra Martínez reported that police surrounded her house after she criticized a press release calling on the Historic Sandinista movement to cease activities including spying on enemies and sharing information with police and the military. The Historic Sandinista network was a key part of the paramilitary “Clean-up Operation” that helped Ortega and Murillo retake control of the streets in 2018 by brute force.

Two weeks later, police surrounded the house of another Sandinista dissident, Marlon Saénz, known as “El Chino Enoc.” He has been one of the few Sandinistas to speak out against Murillo and he denounced an assassination attempt in a video on April 8.

“They [long-time Sandinistas] don’t just receive orders, like Murillo’s people. They have more critical awareness, and a sense of making demands and taking a position,” explained a former board member of UNAMOS, the political party born out of former Sandinistas wanting to reform the movement, who asked not to be named for her safety. “In this military-political regime, nobody can think or act outside of the box.”

The regime also set its sights on new targets this month. On April 19, musician Carlos Luis Mejía, a descendant of the acclaimed musical Mejía Godoy family whose songs in the 1970s protested the Somoza dictatorship, was denied entry into the country.

On April 12, the police arrested singer Josué Monroy, a week after giving a concert where he sang a song that commemorated the April protests. The producers of the event, Salvador Espinoza and Xóchitl Tapia, were arrested the same day, and later another producer, Leonardo Canales. They are being held in El Chipote Prison with other political prisoners, and the government has not given an explanation for the arrests.

“In Nicaragua, we’ve learned about the country’s history through songs. These singer-songwriters have a fundamental role in memory,” said the opposition member. “They are trying to make society forget.” 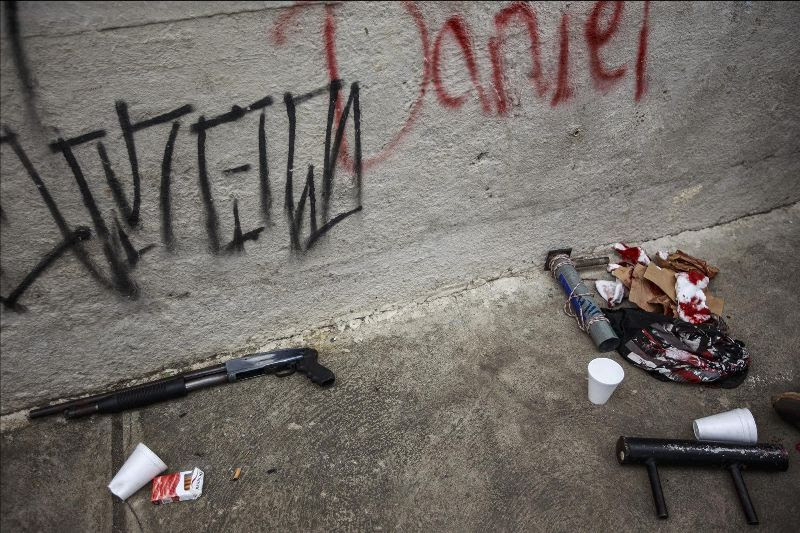 Shotgun and mortar belonging to the youth pinned down in the university, June 30, 2018. (Fred Ramos/El Faro)

Murillo also attempts to change the narrative through her speeches that deny the government killed, kidnapped, or tortured protesters during and since the April protests.

The military occupation of media outlets, stripping of universities’ legal status, and closure of NGOs are more examples of the government’s attempt to control thinking. The last to be canceled was the Luisa Mercado Foundation, headed by the famed writer Sergio Ramírez, and the organizer of the annual international literature festival Centroamérica Cuenta.

When Will Democracy Return?

Just five months after sham elections that prevented a political change, opposition leaders recognize that they are still recovering.

Alexa Zamora said that they continue to work to “build the conditions” for a transition to democracy. She emphasized that they still hope to avoid a power vacuum —such as a coup or Ortega’s unexpected death— that would only create more violence and suffering, but that they are preparing for all scenarios, whether a democratic opening, another period of social unrest, or a complete consolidation of a single-party regime similar to Cuba.

“The biggest challenge has been to agree on a common strategy and show to people that there is more that unites us than divide us, past the ideological differences and egos,” said Zamora, “and to take advantage of this diversity in the opposition to consolidate a single opposition project with the goal of getting Ortega out of office.”

Before the imprisonment of all major opposition candidates, unity had already become the primary obstacle to an electoral victory.

Neither opposition member could say just how long Ortega and Murillo can hold on to power. The hope lies in the government’s own weaknesses: “This regime sustains itself through violence and by its capacity to coopting the institutions as its repressive arm to grip onto power,” said Zamora. “But this is not sustainable.”

A final note before we go: The Honduran Security Ministry announced on Wednesday that former President Juan Orlando Hernández will be extradited and turned over to the DEA on Thursday morning. His family maintains his innocence and vowed in a statement to demonstrate in U.S. court that the extradition was an act of vengeance from drug traffickers.

Thanks for your time. P​lease pass along our work and consider funding independent journalism in Central America, in its most critical hour, at support.elfaro.net.