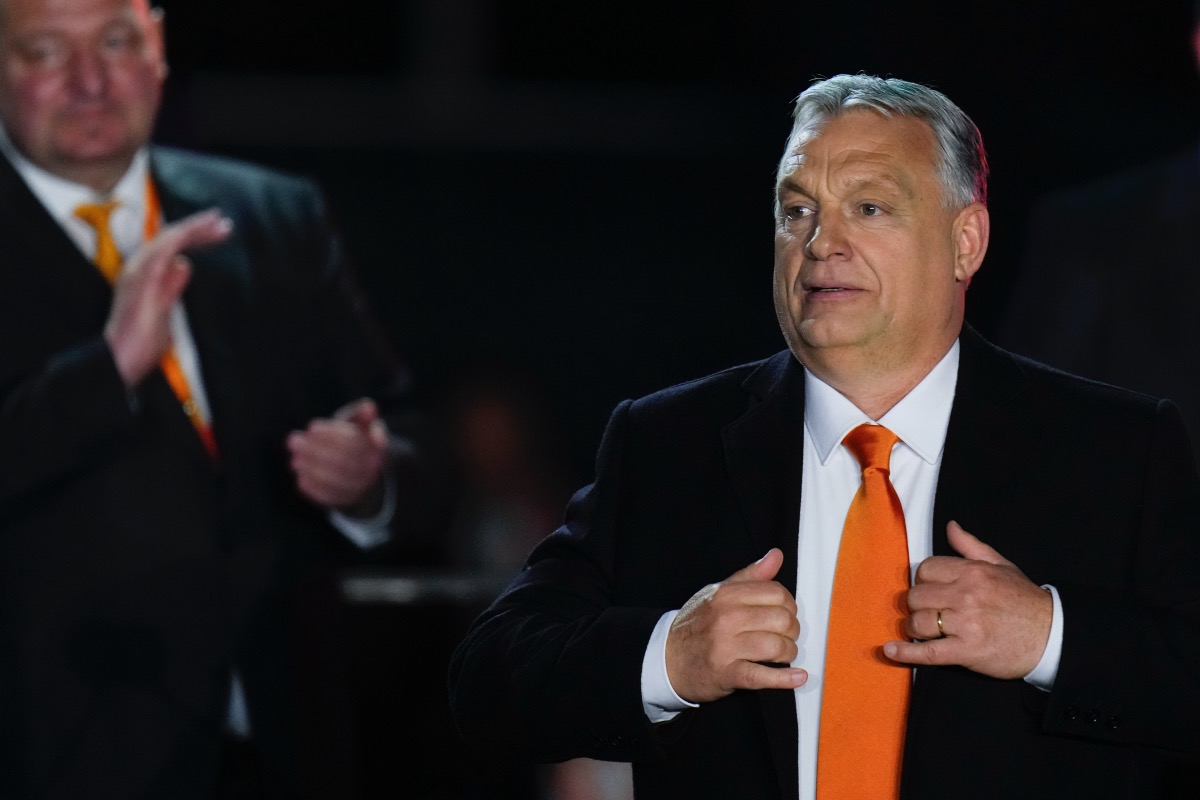 Thank you to everyone who joined us for #CPACHungary, and all freedom-loving people around the globe. pic.twitter.com/jdhjjHQpfC

CPAC has always been a pretty unhinged event. I attended a recent event in Orlando, Florida. It felt like a cult meeting, with life-sized gold statues of Donald Trump, attendees proudly sporting QAnon gear, and breakout rooms with panels dedicated to the fraudulent claim that the 2020 election was stolen from Trump.

There’s a clear ideological project by conservatives in the United States that conflicts with the goal of a free and inclusive democracy. Conservatives have always been pretty hypocritical when it comes to their pretensions around working toward smaller government. After all, President George W. Bush massively ballooned government spending through his illegal invasion of Iraq and bloated government bureaucracy by creating the Department of Homeland Security.

A message to #CPACHungary from the 45th President of the United States, Donald J. Trump. pic.twitter.com/LNxRDJqsRu

Through the inconsistency of the conservative prescription of “do as I say, not as I do,” there has always been the pretense of maintaining an ideological line that respected liberal democracy and rejected government power as a tool. That pretension is now gone.

The new right has openly embraced the culture war as the political fault line that decides the ideological orientation of our society, and conservatives are more than willing to use the government to enforce their ideas and maintain power. You can see it with the erosion of basic democratic norms, like Sen. Mitch McConnell (R-KY) and other Senate Republicans refusing to hold hearings to nominate Merrick Garland to the Supreme Court for nearly a year.

Across the country, Republican state legislatures are drawing hyper-partisan and gerrymandered district maps. In states like Florida, Gov. Ron DeSantis has criminalized protests, restricted lessons regarding racism and discussion of LGBTQ topics in public schools, and pushed legislation punishing Disney, not for exploiting and mistreating its workers, but for criticizing his homophobic proposals.

Orbán’s political model in Hungary has provided inspiration and an example to follow for American conservatives. His government has effectively targeted immigrants and LGBTQ Hungarians as enemies corrupting traditional Hungarian family values and norms. Anti-Semitism has been effectively used to create a boogeyman out of Jewish financier George Soros in a publicly funded smear campaign reminiscent of the daily two-minute hate sessions against Emmanuel Goldstein in the book Nineteen Eighty-Four.

Why is CPAC in Hungary? Because the ideology of the Left is being rejected around the world. Remarks by @mschlapp at #CPACHungary. pic.twitter.com/eEYIA6vIgV

Similar to Florida, Hungary passed its own version of a “Don’t Say Gay” law, which the government labeled as an anti-pedophilia measure to expand government control over school curricula and regulate programming on Hungarian airwaves. As DeSantis orders the Florida Department of Education to prohibit  “social justice” topics in new guidelines for teachers and bans dozens of math textbooks for “prohibited topics,” it’s worth looking back at a 2018 Hungarian government decree removing accreditation for Hungarian gender studies degrees, a move that banned Hungarian universities from teaching the subject.

Aggressive partisan gerrymandering is something that both Florida and Hungary also have in common. The Republican-controlled Florida Legislature just passed a new congressional map that cuts the number of majority-Black districts in half and gives the GOP a significant electoral advantage. In Hungary, Orbán also created new districts that resulted in 83 percent of seats being won by his Fidesz party with only 54 percent of the vote.

Republicans are not beating around the bush when it comes to their admiration of Orbán and his political model. In fact, Matt Schlapp, the chairman of CPAC, says there’s a lot about Orbán and Hungary that American conservatives can admire. Tucker Carlson has said that Orbán’s Hungary is a “signpost to a better way” for America, and Orbán has returned the love, saying that Carlson’s hateful show should be broadcast “day and night,” during a speech in which he called for American conservatives to control their own media outlets.

Journalists from prominent U.S.-based publications like The New Yorker, Rolling Stone, and the Associated Press were barred from attending CPAC in Hungary. Schlapp refused to explain the ban, but I can speculate that they didn’t want any critical coverage of the event, nor did they want pesky reporters posing difficult questions to Hungarian officials about their undemocratic and authoritarian measures to indefinitely hold on to power. Schlapp was trying to hide the dots connecting Hungary’s authoritarian political project and American conservatism.

Orbán opened his CPAC speech by calling on conservatives across the world to “coordinate the movement” of allies and touched on all the greatest hits for Republicans, complaining about gender, critical race theory, cancel culture, censorship on tech platforms, and even eliciting applause when bragging about a wall he ordered built during an influx of migrants from Syria in 2015.

The GOP is now an authoritarian, increasingly fascistic political outfit willing to throw any semblance of democratic norms out the window for political power. They only care about power for power’s sake. Their political north star and vision for America is Viktor Orbán’s Hungary. But don’t take my word for it—listen to the CPAC speeches, go look up Trump’s past praise for the Hungarian tyrant, and look at what DeSantis is doing in Florida if you need further convincing.