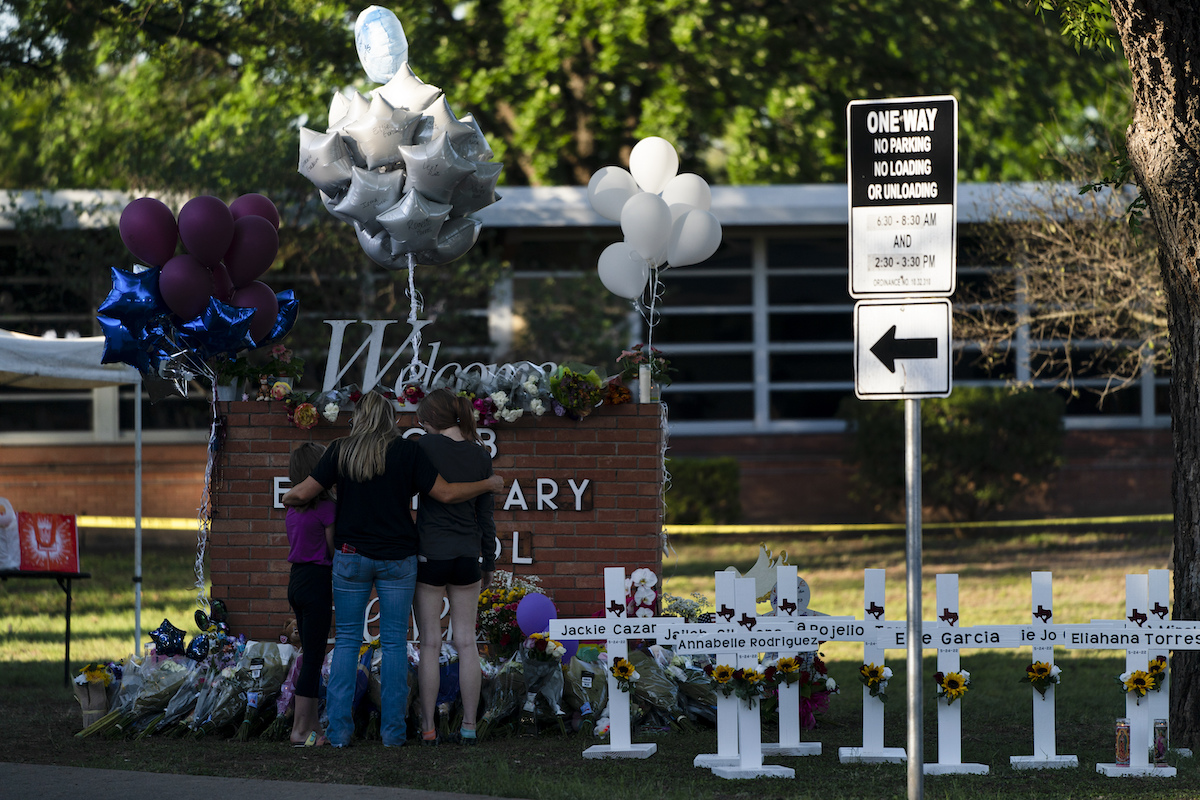 A family pays their respects next to crosses bearing the names of Tuesday’s shooting victims at Robb Elementary School in Uvalde, Texas, Thursday, May 26, 2022. (AP Photo/Jae C. Hong)

After the terrorist attack on an elementary school in Uvalde, Texas, conflicting accounts of what occurred differ based on who is asked. As is typical of fluid situations like this, information has to be verified. While we search for a motive or explanation, the authorities are confusing the public with multiple narratives. A conversation that’s dominating the national discourse.

Trying to make sense of things during these times is tough, gut-wrenching. It’s always sad to see just how normalized it is for some. Mass shootings have become such a routine part of society that for many, it’s not even shocking. For others, it’s a time to sow confusion, spread lies, and promote hate. But for multiple communities, it’s become an indefensible part of life.

The police response based on witness accounts, parents’ videos from the scene, and obscure statements by the authorities has been harrowing. One example is the initial story suggesting police engaged with the terrorist before he entered the school. That never happened. After crashing the truck, the gunman fired rounds for more than 5 minutes before entering the school.

As is typical of communities along the border and their relationship with police which tends to be insufferable, local cops didn’t respond for minutes more. In a press conference, DPS South Texas Regional Director, Victor Escalon, said an officer “was not readily available” and did not confront 18-year-old Salvador Ramos before he entered Robb Elementary School.

BREAKING: Authorities now confirm they are examining the response of police in Uvalde in the shooting of 19 children amid conflicting witness statements, including what steps they took to stop the gunman. Part of the review will include a timeline based on radio traffic. (1/3)

Videos posted online show parents yelling at police, “go in there!” as they stood outside of a perimeter of yellow tape in militarized gear holding military weapons. At one point in the video, police took a defensive posture against the parents with an officer unholstering his taser as two other officers appeared to be restraining someone on the ground nearby.

“It was not the right decision. It was the wrong decision. Period… We believe there should have been an entry. We don’t have time,” McCraw said. “When it comes to an active shooter, you don’t have to wait on tactical gear, plain and simple.”

Meanwhile, parents reported being tased and handcuffed after begging officers to confront the threat to their children. Additionally, McCraw’s brashness and what seemed like a lack of concern for Latino lives have been noted by many. His tears, seemingly forced, don’t seem legitimate to the people of Uvalde or among many Latinos across the country.

None of This Is New

As every Latino intently watches reports of the police response, many of us aren’t surprised by their lack of action. Others, however, seem shocked and appalled. As they should be. This is a typical response for the “Blue Lives Matter” types who blindly support police actions no matter how abhorrent they may be. They are shocked that their support isn’t reciprocated.

Republican elected officials have responded in a similar fashion. While Greg Abbott and others waited until the last minute to back out of the NRA conference that was held in Houston just days after the Uvalde terrorist attack, others like Ted Cruz happily attended and spoke at the event. As did Donald Trump and a host of other high-profile Republican leaders.

While the general disdain of Latinos by the political right has been known, there are others who don’t see it. In a recent article on Medium, I argued that Latinos have to begin rethinking their proximity to whiteness. Many in our community buy into the idea that if we become “culturally” white, white people will accept us because we accept their bigoted beliefs.

However, that is never the case when it comes to white power structures.

What we’ve seen in online communities over the last several years and the popularization of ethnonationalism in communities of color speaks volumes at a time like now. The anti-Blackness during the civil rights protests of 2020 speaks a little louder. As do the xenophobia, transphobia, homophobia, and misogyny that’s become mainstream; all wrapped into nice little dog whistles such as “Western Chauvinism” and “America First” echoed like good little wannabe-Klansmen.

At a time when non-white groups should be coming together to defeat white supremacy, white nationalists are sowing discord among us. It's sad to see non-white people buying into and validating white power structures using the ideologies of neo-Nazis.

The idea that Latinos bought into conservative culture wars over guns, Black lives, immigration, and even the over-policing of our neighborhoods seems absurd. But it’s actually part of the “American” assimilation process that’s been in place since the country’s founding. Assimilation to white society means accepting things as they are despite the detriment to our communities.

In the Medium article, I said, “The reality of how white people see the Latino community, no matter how white some Latinos pretend to be, reared its ugly head just days ago in Uvalde. It stood by and held parents at bay. It refused to attack the attacker. It held a defensive position against children’s guardians. It participated in the robbing of life.”

That’s how white power structures operate. In one of my opinion pieces for Latino Rebels, I emphasized this saying, “Hate groups might welcome you as one of their own but once they manage to maintain their superiority over all of us, you suddenly become a target.”

Just as well-meaning white people tell us every day, so do white nationalists and even mass shooters in their manifestos: we’re not white no matter how hard anyone is willing to try. If we have any ethnic background that isn’t directly European, so-called “Americans” will label us as non-white both socially and politically. That’s just how it is here in the United States.

In order to shift gears and move towards actionable plans, it is incumbent on our myriad communities to hold those in power to account. Democrats may not be your cup of tea, some of them aren’t for most people. But there are conservative Democrats all over the place. Especially, in South Texas and South Florida. They’re not hard to find. That’s actually why they’re in, or running for, political office.

More importantly, than any of that is holding politicians responsible, and right now, those are Republicans. The same people who are currently trying to sweep all of the underlying issues that lead to terrorist attacks under the rug. They’re not interested in stopping future attacks. They seem to be only interested in creating more violence.

The people talking about arming teachers and hardening schools instead of addressing the issues that lead to mass murder will only push the next terrorist into more public areas like places of worship, grocery stores, and Walmarts.

No interest in stopping terrorists.

The bottom line here is we need action and Republicans aren’t interested in taking any. How does any Latino community, whether they’re Cuban or Mexican or Puerto Rican, expect to look out for their respective communities when your biggest enemies hold public office, run police departments, and take your power away from you by making it harder to vote or be heard?

We can clearly see how proximity to whiteness and the urgency of appealing to white bosses leads to Latinos taking hostile actions against their own people. It happens constantly but it’s getting worse. Many of you who’ve adopted this false sense of belonging to white-centered groups have adopted ethnonationalism which is but one step removed from white nationalism and white supremacy. By doing this you do the work of racist white people.

One example of this lies in the ideology of the Boogaloo Bois that has been adopted by many other hate groups. They seek to foment an ethnic war between us and Black people and they’re willing to facilitate that as long as we’re fighting each other. They fear being outnumbered in society and in the political class. They fear the “great replacement” conspiracy theory.

For Latinos, whether in South Florida, South Texas, or wherever they find themselves in the U.S., it’s past time to drop the white nationalist talking points and embrace your inherent humanity for others who look like you. Otherwise, expect to continue being treated like you’re lesser than that white friend you constantly try to impress.

If the events of the last several weeks in Buffalo and Uvalde haven’t shown you the disdain racist white people have for you, I’m not sure what else to say other than to pay closer attention because they don’t want you here anymore than any other non-white people. They see all of us as a disease upon “white culture,” whatever the hell that’s supposed to be.

The U.S. is a country where nearly every language in the world is spoken and every nationality is represented. If you can define whiteness in the midst of all that, you’re welcome to do so.