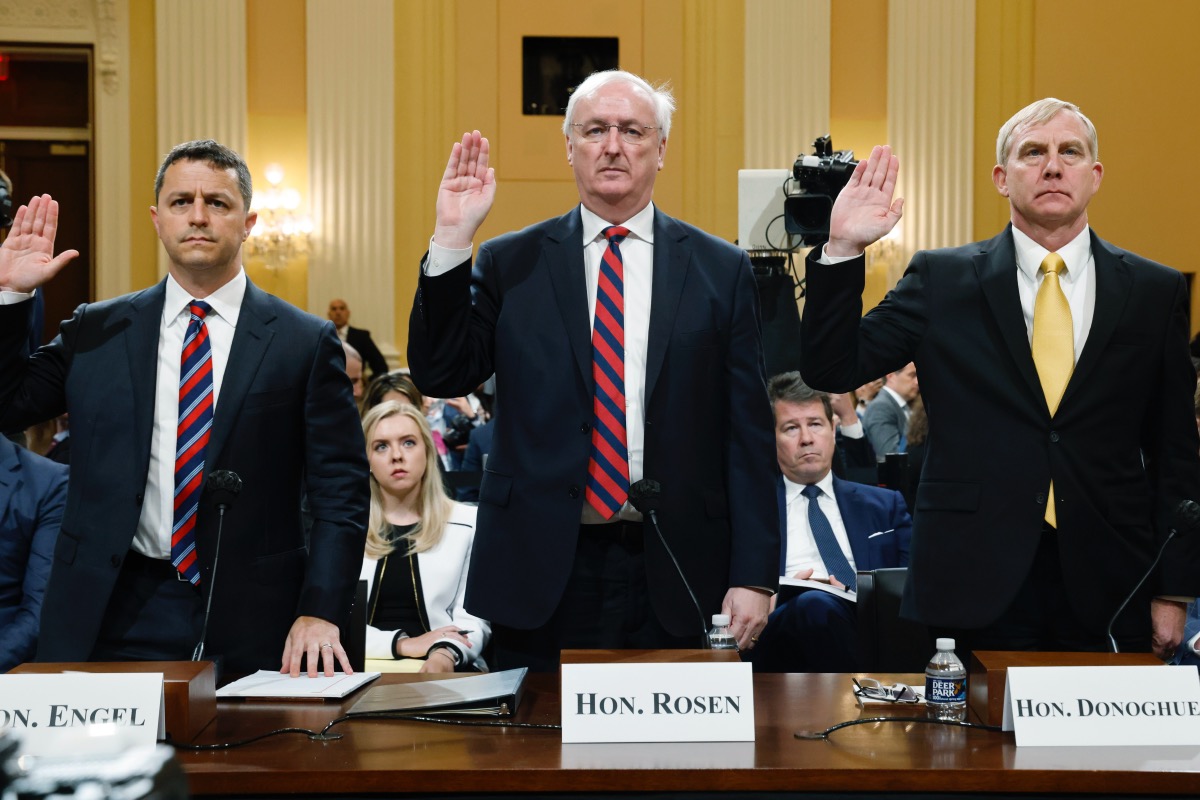 Whereas the fourth hearing on Tuesday centered on attempts by former President Donald Trump to pressure state and local elections officials to overturn the results of the 2020 election that resulted in President Joe Biden winning the White House, the fifth hearing focused on the pressure campaign that President Trump and his operatives put on federal government officials at the Department of Justice.

According to testimony, the witnesses rejected attempts to overturn the 2020 election by the former president and his cronies, especially Jeff Clark, a former Justice Department official in the Environment and Natural Resources Division, who witnesses testified tried to replace Rosen as acting attorney general.

“A key focus of our hearing today will be a draft letter that our witnesses here refused to sign… written by Mr. Jeff Clark.. and the letter was to be sent to the leader of the Georgia state legislature,” said Rep. Liz Cheney (R-WY). “Other versions of the letter were intended for other states.”

In video testimony played at the hearing, multiple witnesses ridiculed Clark’s credentials for taking over as attorney general, a plot that ultimately failed.

NEW: Trump White House lawyer Eric Herschmann testified to Jan. 6 committee that he told Jeffrey Clark that his plan to overturn the 2020 election was nuts: “The best I can tell is the only thing you know about environmental and election challenges is they both start with E.”

“States run their own elections,” Donoghue said unequivocally, as his notes from conversations with Trump were displayed on screen. One of the notes quoted the former president as saying: “Just say the election is corrupt and leave the rest to me and the Republican congressmen.”

Trump – “Just say the election was corrupt and leave the rest to me and the Republican congressmen”. This is the smoking gun. Coupled with other testimony demonstrates both Trump’s substantive involvement and corrupt intent, requisite state of mind.

The committee went to great lengths over the previous three hearings to demonstrate that the former president and his closest advisors were aware that Joe Biden had won the election, that the election had not been stolen, and that allegations and conspiracy theories to the contrary were false.

That’s when Jeff Clark, according to testimony, stepped up to serve as a rubber stamp for former President Trump’s election conspiracy theories on Justice Department letterhead.

Trump’s former attorney, Rudy Giuliani, testified that Clark was chosen to lead the election lie at the Department of Justice because Mr. Clark wasn’t concerned about the effects such an assignment would have on his reputation.

According to witness testimony, as pressure mounted for the Justice Department to acquiesce to replacing top officials with Trump allies and interfere with the election, pushback came from career officials like Donoghue and Rosen.

“Not all public officials behaved in the honorable way our witnesses did,” said Cheney in her remarks during the hearing.

“The president was very agitated by the acting attorney general’s response,” said Donoghue, who testified that Trump then called on Ken Cuccinelli, the acting secretary of Homeland Security, to seize the voting machines.

Ultimately, the voting machines were not seized.

Rep. Scott Perry (R-PA) was spotlighted multiple times during the hearing as trying to push conspiracy theories in an effort to overturn the 2020 election results. Perry, according to testimony, texted Trump’s White House chief of staff Mark Meadows, an “absurd” YouTube video in which the case was made that an Italian defense contractor had used satellites to change votes from Trump to Biden.

“This is one of the best examples of the lengths to which President Trump would go to stay in power, scouring the Internet to support his conspiracy theories,” said Kinzinger.

Rosen testified that Clark had warned him that Trump was considering replacing Rosen with Clark as acting attorney general.

Donoghue: "On the one hand, I wasn't going to accept being fired by my subordinate, so I wanted to talk to the president about that…"

Rosen said he immediately called Meadows to schedule a meeting with Trump, then called White House counsel Pat Cipollone who, according to Rosen, agreed that Rosen should not be replaced by Clark.

Donaghue testified that a call was put together with four of the five deputy attorney generals. “All without hesitation said that they would resign” if Trump replaced Rosen with Clark as acting attorney general, said Donoghue.

On the day of the January 6th attack, Rosen testified that he had multiple calls with congressional leadership and senior White House officials including Vice President Mike Pence. He also said that he did not speak with Trump on that day.

The big reveal from Thursday’s hearing were the names of six House Republicans who asked the White House for a pardon after January 6th.

House GOP members of Congress who sought a presidential pardon over Jan 6:

Kinzinger was quick to point out that the only reason for anyone to ask the president for a pardon beforehand was if they at least suspected that they had committed a crime.

The next House Select Committee hearing to investigate the January 6th attack on the Capitol is tentatively scheduled for after the July recess.