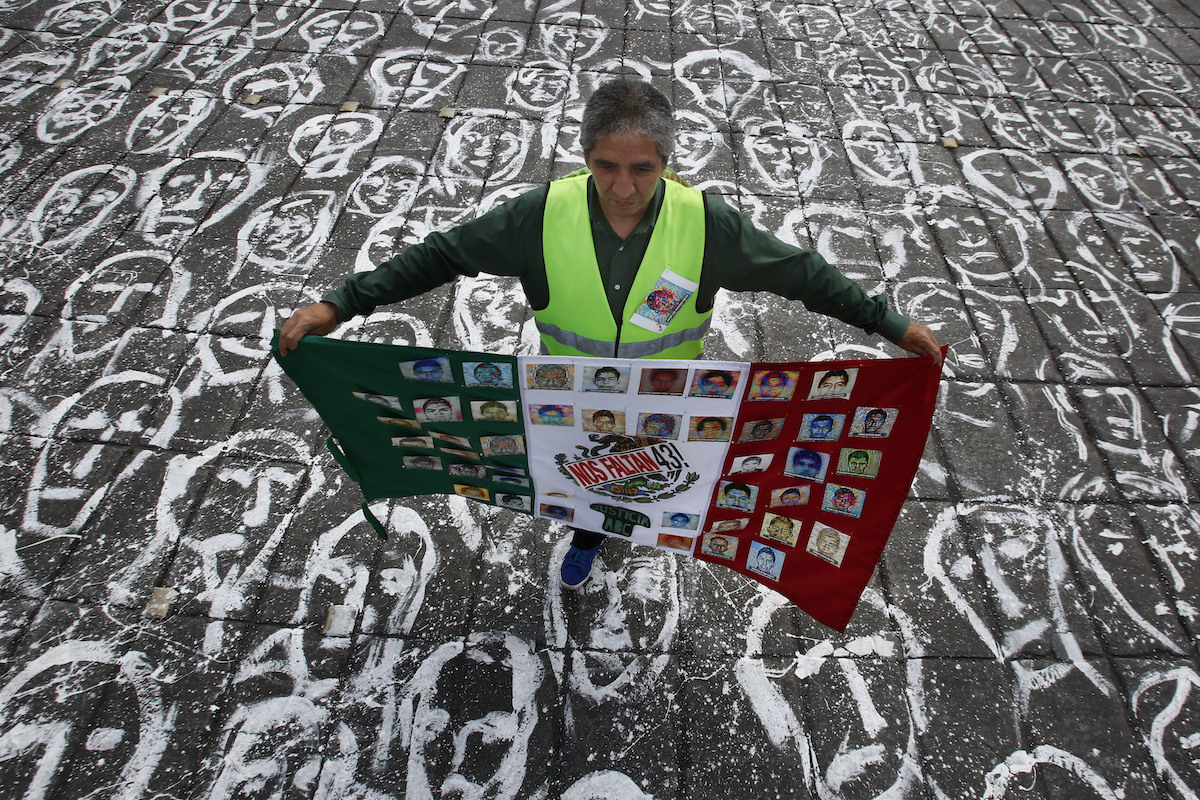 In this September 26, 2016 file photo, a man carrying a Mexican flag with the portraits of 43 missing students from the Rural Normal School at Ayotzinapa, stands on the Angel of Independence monument roundabout painted with faces representing the missing students during a protest march in Mexico City. (AP Photo/Marco Ugarte, File)

On the night of September 26, 2014, after several encounters with the local police in the nearby municipality of Iguala, 43 students disappeared in Mexico’s southern state of Guerrero. They were teenagers attending their first year at the Ayotzinapa Rural Teacher’s College. The Mexican government said they were killed by gang members and burned in a dump on the outskirts of Iguala. The parents —and the organizations representing them— didn’t believe it.

Eight years later, Futuro Investigates obtained a copy of an official document with a new and horrifying version of what might have happened. The report concluded that all the students were indeed killed but implied the Mexican army was an accomplice in covering up the crimes.

A few weeks ago, the Commission for Truth and Access to Justice in the Ayotzinapa Case published a public report of its investigation, but because many of the essential findings and conclusions were redacted, the report was hard to understand and follow.

Futuro Investigates obtained an unredacted copy of the same report from a confidential source in the Mexican government. The source who shared the document said that they did so because they consider it vital that these new leads be investigated.

Private messages contained in the document show the dehumanization and violence around these crimes.

The Commission concluded that Ayotzinapa was a state crime, but from the redacted version of the report made that conclusion hard to understand. The unredacted version, however, made it clear, saying that the students were “cunningly killed” and their bodies were disposed of in different locations around Iguala.

The unredacted report contains a detailed chronology of the disappearance, from when the students left their school in the afternoon and traveled 150 miles north to Iguala, to when local authorities might have ordered the homicides and local gunmen executed the orders.

By analyzing the calls and messages sent between criminals and officials during the aftermath of the killing order, the case’s new timeline suggests that the students were assassinated, dismembered, and buried the same night.

The unredacted version showed the horror of the killings and the bodies being hidden. It implied the direct participation of several members of the Mexican army and also suggested that some bodies could have been hidden inside military facilities.

According to the unredacted report, the order for the killing was improvised. Criminals and corrupt officials believed some members of a rival gang were among the students. The former mayor of Iguala, José Luis Abarca, decided first to monitor them and later to “kill them all” to show “who is the boss in Iguala.” Abarca has been in jail for eight years, accused of various charges related to the case. He claims he is innocent.

After the order was given and the students were killed, leaders of the local gang Guerreros Unidos first sought to burn the students’ bodies. They changed their minds as there were too many corpses and they had no time to finish the job before sunrise. Instead, according to the report, they broke into smaller groups and disposed of the remains as best they could.

One of the groups was tasked with dissolving 10 students’ remains in acid. They didn’t have enough chemicals to do it, so they disbanded five. The rest of the teenagers were cut into pieces with machetes and buried. One of the criminals skinned a student’s face to impress his boss.

Just before dawn, the leaders of the groups notified their bosses that the job was finished. By morning, the six students who were still alive were taken as hostages to a nearby warehouse. The report stated that they were assassinated days later, on the orders of then-Col. José Rodríguez. Rodríguez is currently being detained for organized crime charges and has declared himself innocent of the students’ killing.

The scandal over the students’ disappearance grew in the days following that fateful night. A message was sent from a cell phone identified as Mayor Abarca’s, informing an Army captain, now detained, that he was negotiating with the Mexican federal government.

Tomás Zerón, then head of the Mexican Criminal Investigation Agency (the Mexican equivalent to the FBI at the time), was allegedly sent by then-President Enrique Peña Nieto to talk with Abarca. The mayor said to his contact that Peña Nieto offered Abarca to declare himself the intellectual author of the murders. In exchange, the president’s officials would take Abarca out of Mexico.

Zerón is now living in Israel, fighting a Mexican petition for extradition. He rejected an offer from the Mexican government to become a witness for the prosecutor in the case. His lawyer in Mexico told me that Zerón never spoke with Abarca before his arrest, did not negotiate with him, nor did he offer him anything.

In the chats where they had previously coordinated the murders, criminals, officials and soldiers talked about how they unearthed bodies to take them to a military facility in Iguala home to the 27th Infantry Battalion.

According to the messages and analysis of the phones’ locations, the operation to exhume the remains from improvised graves on the outskirts of Iguala and move them to other locations, including the military facility, lasted months. It sought to prevent family members, the groups working on their behalf, or the authorities from finding any proof of the crimes.

“No one would enter there [the facility],” read one of the messages attributed to a captain. As of mid-November 2014, they were still digging up and moving bodies.

According to the underacted report, the previous conclusion of the case —which found that the students were burned in a dump near Iguala— was a political invention. This fabricated truth, the investigators said, prevented the investigation of other facts that were always in the participants’ communications during those crucial hours of that night in September, but they never received the authorities’ attention.

Until now, the main public criticism against the military and federal officials regarding this case was the failure to protect the students, although they had been monitoring them since they left the Ayotzinapa rural school. The new report proposed that the concealment and the subsequent transfer of their remains to the military camp —for days, weeks, and months after the murders— should also be investigated.

Over the years since 2014, the press and activists focused on showing that the students could not be burned in the Cocula garbage dump. This report opened a new line of investigation and suggested new places to look for missing remains.

On Saturday, Mexican magazine Proceso and Spanish newspaper El País published that, after the public version of the report was published in August, the Commission sought the detention of more than 80 individuals related to the case.

Shortly after, however, the Attorney General’s Office (FGR) requested the cancelation of at least 21 of them. “The same judge who granted the orders has agreed to the request of the FGR [to cancel 21 detention orders] and has left them without effect,” according to El País. The case has created an internal conflict between institutions within the Mexican government.

During the last three years, the government of Andrés Manuel López Obrador has been giving more power and duties to the Mexican Army. Right now, the Mexican Congress is about the vote on a controversial law that will allow the National Guard, now under a civilian regimen, to become under the control of the Army.

I published the first version of this story in Spanish last Saturday for my weekly column Linotipia in the Mexican newspaper Reforma. Since then, more than 170 articles, columns, and commentaries have been published in Mexico containing my name. My name was also in trending topic all weekend in Mexico, with more than 25,000 mentions.

The viral reaction came shortly after Alejandro Encinas, the head of the Commission that published the report, announced that he was demanding an internal investigation from the Mexican Federal prosecutor to uncover who was the confidential source.

Encinas called the leak of the unredacted report “absolutely irresponsible and disrespectful to the parents of the missing students.”

I received thousands of hate messages on my social media, calling me “unethical,” “irresponsible,” and “miserable,” accusing me of helping the criminals. Epigmenio Ibarra, a businessman and personal friend of the Mexican president, suggested that I should be imprisoned due to the revelation of the report and its details.

Other thousands of messages applauded the publication of the unredacted version of the report, claiming the public interest in the case.

Miguel Agustín Pro Juárez, the human rights organization that represents the students’ parents, said in a public statement that the report is under analysis by experts who are analyzing the reliability of the information.

“We remember that, in the face of leaks, the authorities must be investigated, since acting irresponsibly, they are the ones who generate confusion and pain, and not the press,” part of the statement said.

Peniley Ramírez is an award-winning journalist. She is Executive Producer (Futuro Investigates & Special Projects) for Futuro Unidad Hinojosa, a division of Futuro Media.