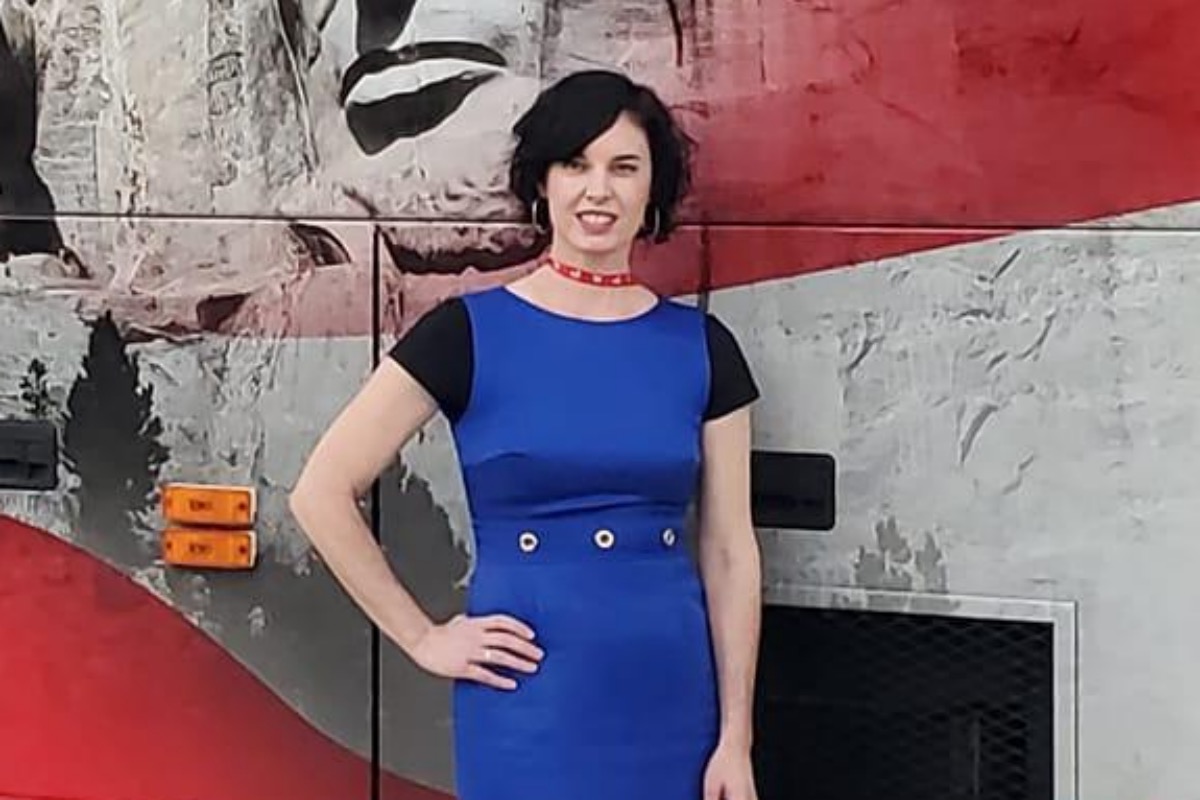 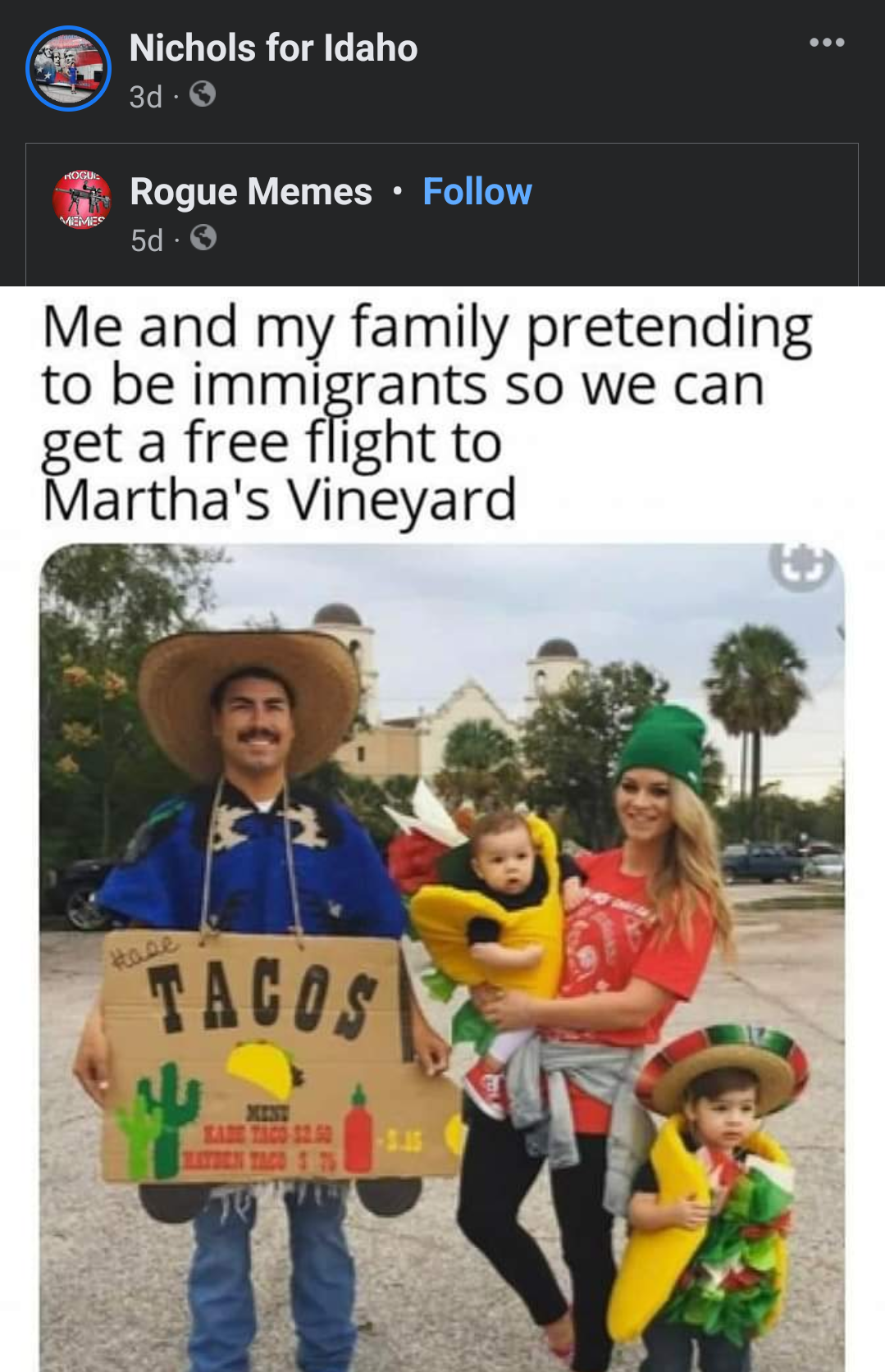 The meme shows a young couple and their two children, the kids wearing taco costumes and and the father wearing a pancho, sombrero, and a cardboard sign advertising tacos.

“Me and my family pretending to be immigrants so we can get a free flight to Martha’s Vineyard,” the meme reads.

The meme is only the latest in a pattern of hateful and xenophobic espousals by Rep. Nichols. She recently appeared on a podcast called Ed Martin Live, whose posts include anti-trans Bill Maher memes, promotion for a book by anti-Latino bigot Todd Bensman, and quotes from the racist Center for Immigration Studies, described as a hate group by the Southern Poverty Law Center but disguised as a think tank in the Tanton network.

For politicians, particularly conservatives who’ve adopted the Christian white nationalist ideology that dominates the right wing, social media content can be telling. Anti-Latino hate is gaining momentum in Republican circles, where bigotry is couched in border security and immigration rhetoric, making it far too easy for such ideas to go unchallenged by the media and the general public alike. 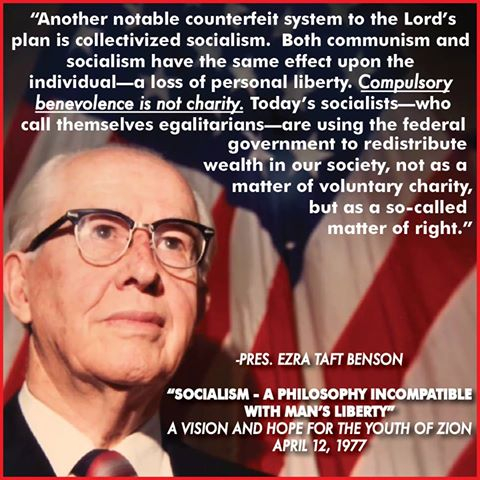 When Rep. Nichols shared the Ezra Taft Benson meme shown above —not on social media, but on her campaign website— it was a sign of a broader belief system.

Benson was a member of the John Birch Society, a decades-old group that promotes ideas including Christian nationalism and the racist theory known as the “Great Replacement.” He also despised the Civil Rights Movement and attacked it as often as he could, saying that “the so-called civil rights movement as it exists today is used as a Communist program for revolution in America just as agrarian reform was used by the Communists to take over China and Cuba.”

Declaring human rights and civil rights movements as communist endeavors go back more than 70 years when the Ku Klux Klan used the same tactic to attack freedoms granted to Black people and immigrants.

On Nichols’s campaign website, she lists “illegal immigration” —twice— as something she doesn’t support, which gives you an idea of focused she is on it.

Nichols hails from the same area as the teachers who dressed up as a border wall for Halloween in 2018, so maybe her actions should come as no surprise. In October 2021, she seemed to openly call for violence against various news outlets and human rights organizations in a tweet.

Idaho has a swamp and there are many players that are working hard to turn it blue. We must stand and not let a Rocky Mountain Heist happen here in the Gem State. Local elections are coming up and they will have consequences. #peopletician #nicholsforidaho #draintheswamp pic.twitter.com/8aAuKyiZKT

Unsurprisingly, however, Nichols has been endorsed by the National Rifle Association.

Far-right extremism, bigotry, and racism are on the ballot in the midterm elections in November, but it remains to be seen if U.S. voters will willingly accept it or try to beat it back to the fringes of society where it belongs.

Nichols and the Republican Party seem to think racism is funny and the victims of it are to be mocked for the entertainment of the base of voters who see nothing wrong with it.

Politicians allowing their voters to be bigots without challenging them is one problem, but to then join them in dehumanizing people who have been railroaded and literally shipped like cattle by state leaders in Texas, Florida, and Arizona is another.

I reached out to Idaho State Rep. Tammy Nichols for comment but have received no response as of this writing.