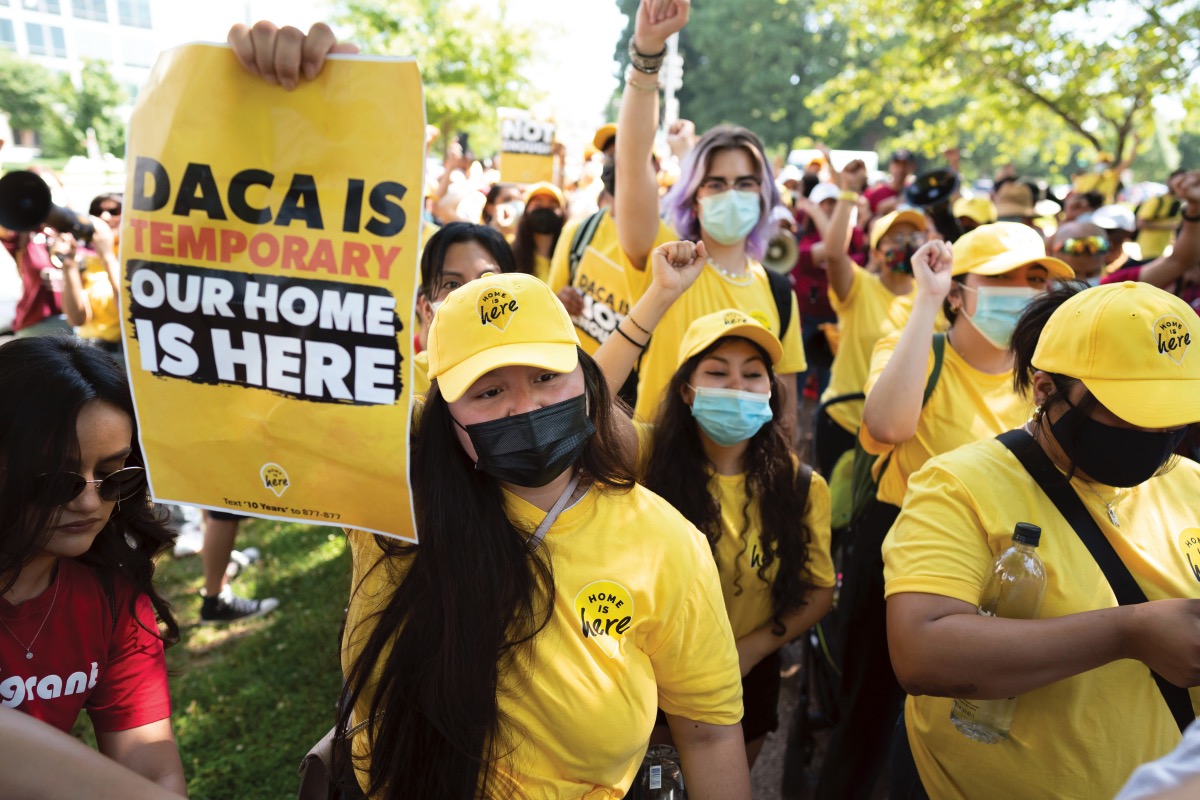 Susana Lujano, left, a DREAMer from Mexico who lives in Houston, joins other activists to rally in support of the Deferred Action for Childhood Arrivals program, also known as DACA, at the U.S. Capitol in Washington on June 15, 2022. A federal appeals court Wednesday, October 5, 2022, ordered a lower court review of Biden administration revisions to DACA, a program preventing the deportation of hundreds of thousands of immigrants brought into the United States as children. The ruling, for now, leaves the future of DACA up in the air. (AP Photo/J. Scott Applewhite, File)

NEW ORLEANS (AP) — A federal appeals court Wednesday ordered a lower court review of Biden administration revisions to a program preventing the deportation of hundreds of thousands of immigrants brought into the United States as children.

The 5th U.S. Circuit Court of Appeals said a federal district judge in Texas should take another look at the program following the revisions adopted in August. The ruling, for now, leaves the future of the Deferred Action for Childhood Arrivals up in the air.

“It appears that the status quo for DACA remains,” said Veronica Garcia, an attorney for the Immigrant Legal Resource Center, an advocacy organization.

DACA was adopted by former President Barack Obama’s administration and has had a complicated ride through federal court challenges.

Texas-based U.S. District Judge Andrew Hanen last year declared DACA illegal. He found that the program had not been subjected to public notice and comment periods required under the federal Administrative Procedures Act. But he left the program temporarily intact for those already benefiting from it, pending the appeal.

Wednesday’s ruling by three judges of the New Orleans-based 5th Circuit upholds the judge’s initial finding. But it sends the case back to him for a look at a new version of the rule issued by the Biden administration in late August. The new rule takes effect on October 31.

“A district court is in the best position to review the administrative record in the rulemaking proceeding,” said the opinion by Chief 5th Circuit Judge Priscilla Richman, nominated to the court by President George W. Bush. The other panel members were judges Kurt Engelhardt and James Ho, both appointees of President Donald Trump.

The new rule’s 453 pages are largely technical and represent little substantive change from the 2012 memo that created DACA, but it was subject to public comments as part of a formal rule-making process intended to improve its chances of surviving legal muster.

In July arguments at the 5th Circuit, the U.S. Justice Department defended the program, allied with the state of New Jersey, immigrant advocacy organizations, and a coalition of dozens of powerful corporations, including Amazon, Apple, Google, and Microsoft. They argued that DACA recipients have grown up to become productive drivers of the U.S. economy, holding and creating jobs and spending money.

Texas, joined by eight other Republican-leaning states argued that they are harmed financially, incurring hundreds of millions of dollars in health care, education, and other costs, when immigrants are allowed to remain in the country illegally. They also argued that the White House overstepped its authority by granting immigration benefits that are for Congress to decide.

DACA is widely expected to go to the Supreme Court for a third time. In 2016, the Supreme Court deadlocked 4-4 over an expanded DACA and a version of the program for parents of DACA recipients, keeping in place a lower court decision for the benefits to be blocked. In 2020, the high court ruled 5-4 that the Trump administration improperly ended DACA by failing to follow federal procedures, allowing it to stay in place.

DACA recipients have become a powerful political force even though they can’t vote, but their efforts to achieve a path to citizenship through Congress have repeatedly fallen short. Any imminent threat to lose work authorization and exposing themselves to deportation could pressure Congress into protecting them, even as a stopgap measure.

The Biden administration disappointed some pro-DACA advocates with its conservative legal strategy of keeping age eligibility unchanged. DACA recipients had to have been in the United States in June 2007, an increasingly out-of-reach requirement. The average age of a DACA recipient was 28.2 years at the end of March, compared to 23.8 years in September 2017.

There were 611,270 people enrolled in DACA at the end of March, including 494,350, or 81 percent, from Mexico and large numbers from Guatemala, Honduras, Peru, and South Korea.

One response to “Appeals Court Orders Another Review of Revised DACA”