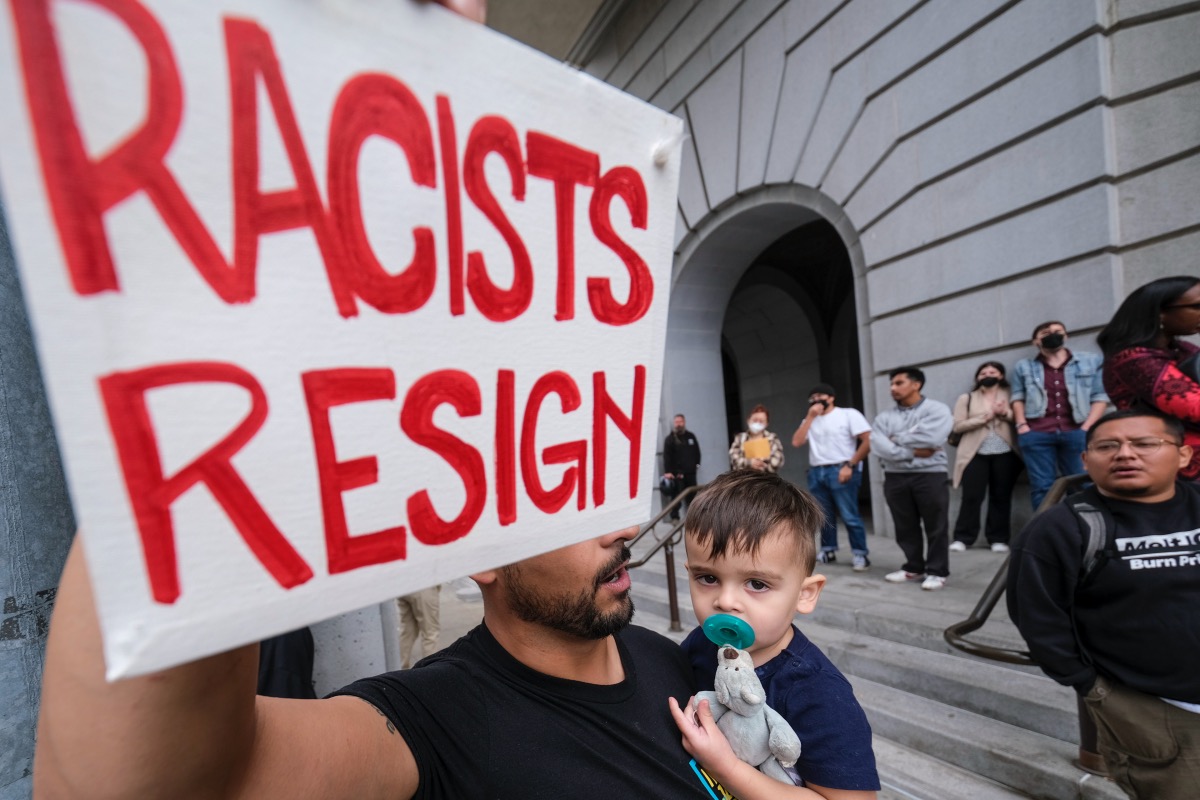 LOS ANGELES (AP) — Where does the Los Angeles City Council go from here?

Three of its members —including the former Council president— are facing calls from President Joe Biden to resign after a recording surfaced of them participating in a closed-door meeting in which racist language was used to mock colleagues while they schemed to protect Latino political strength in Council districts.

Three current or former Council members have been indicted or pleaded guilty to corruption charges, and it’s possible resignations in the coming days could create new vacancies.

The current mayor, Democrat Eric Garcetti, was named last year to become U.S. ambassador to India, but the nomination appears stalled in the Senate because of sexual harassment allegations against one of his former top aides. Elections next month will bring a new mayor and several Council members.

In the short term, it’s a looming question if the Council can assemble the required 10 members —out of 15 total— to conduct business on Wednesday, when coincidentally Biden will be in town.

“I have never seen anything like this,” said Raphael Sonenshein, executive director of the Pat Brown Institute for Public Affairs at California State University, Los Angeles.

“That’s the real challenge now, to kind of get to where they are going to conduct business on a regular basis,” Sonenshein said. “This chaotic situation is going to be very visible … both here and nationally.”

The Council will attempt to reconvene Wednesday, possibly to censure the three members cited by Biden. A Tuesday meeting was nearly derailed when a raucous crowd of protesters packed the chamber, calling for the resignation of those involved in the meeting: former City Council President Nury Martínez, who is taking a leave of absence, and Councilmen Kevin de León and Gil Cedillo, all Democrats.

The Council cannot expel the members—it can only suspend a member when criminal charges are pending. A censure does not result in suspension or removal from office.

The uproar was triggered by a leaked recording of crude, racist comments from a nearly year-old meeting, which also provided an unvarnished look into City Hall’s racial rivalries. Those involved in the meeting were all Latinos.

Martínez said in the recorded conversation that white Councilmember Mike Bonin handled his young Black son as if he were an “accessory” and said of his son “Parece changuito” or “he’s like a monkey,” the Los Angeles Times reported Sunday. She also referred to Bonin as a “little bitch.”

At another point on the hourlong recording, Martínez, the first Latina president of the City Council, called Indigenous immigrants from the Mexican state of Oaxaca “tan feos,” or “so ugly.”

The discussion —which also included a powerful Latino labor leader, who has since resigned— centered on protecting Latino political power during the redrawing of Council district boundaries, known as redistricting. The once-a-decade process can pit one group against another to gain political advantage in future elections.

At the ornate Council chamber, an overflow crowd of protesters delayed the start of Tuesday’s meeting as they angrily shouted for de León and Cedillo to leave the room. Police officers scurried at the edge of the crowd.

De León sat impassively at his seat, his eyes cast downward, as protesters called on him by name to exit the chamber. Others on the Council urged the crowd to settle down and allow the meeting to begin.

Cedillo and de León left their seats early, leaving in doubt if they will appear Wednesday.

Martínez stepped down from the leadership job and apologized Monday, saying she was ashamed of her racially offensive language in the year-old recording. However, she did not resign from her council seat. She announced Tuesday that she needed “to take a leave of absence and take some time to have an honest and heartfelt conversation with my family, my constituents, and community leaders.”

She did not appear at the Tuesday meeting.

In emotional remarks at the meeting, Bonin said he was deeply wounded by the taped discussion. He lamented the harm to his young son and the fact that the city was in international headlines spotlighting the racist language. “I’m sickened by it,’ he said, calling again for his colleagues’ resignations.

“Los Angeles is going to heal,” he said at one point. “I want to lead with love.”

Black and Latino constituents often build alliances in politics. But tensions and rivalries among groups separated by race, geography, partisanship, or religion have a long history in Los Angeles and, indeed, the country. The friction can cross into housing, education, and jobs —even prisons— as well as the spoils of political power.

In one of the most diverse cities in the nation, a long line of public speakers at the meeting said the disclosure of the secretly taped meeting brought with it echoes of the Jim Crow era and was a stark example of “anti-Blackness.”

There were calls for investigations and reforming redistricting policy.

Many of the critics also were Latino, who spoke of being betrayed by their own leaders.

Candido Marez, 70, a retired business owner, said he wasn’t surprised by Martínez’s language, who is known for being blunt and outspoken.

“Her words blew up this city. It is disgraceful,” he said. “She must resign.”

The Los Angeles Times reported that the recording was posted on Reddit by a now-suspended user. It is unclear who recorded the audio, who uploaded it to Reddit, and whether anyone else was present.

“The language that was used and tolerated during that conversation was unacceptable, and it was appalling. They should all step down,” Jean-Pierre said.

Other calls for the councilmembers to resign have come from across the Democratic establishment, including from U.S. Sen. Alex Padilla (D-CA), Garcetti, mayoral candidates Karen Bass and Rick Caruso, and members of the Council.

Democratic Gov. Gavin Newsom has stopped short of doing so, denouncing the racist language and saying he was “encouraged that those involved have apologized and begun to take responsibility for their actions.” Democratic state Sen. Steven Bradford, who represents parts of Los Angeles County, said Newsom should call for the resignation of the three councilmembers.

Councilmember Mitch O’Farrell, serving as acting president of the Council, said the city cannot heal if the three remain in office. He called it a “clear abuse of power” that was “profoundly unacceptable” of elected officials.

“Public opinion has rendered a verdict and the verdict is they all must resign,” he said.

Associated Press writers John Antczak and Amancai Biraben in Los Angeles and Sophie Austin in Sacramento contributed to this report.