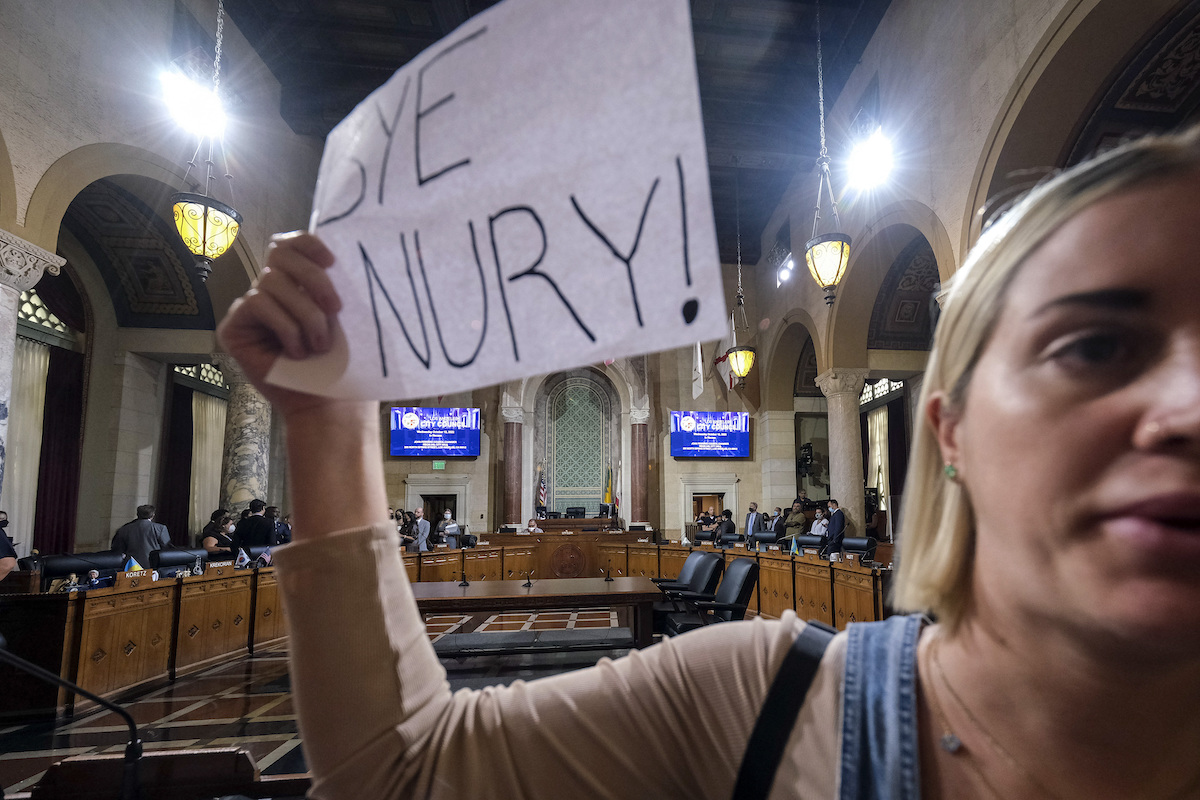 LOS ANGELES (AP) — The former president of the Los Angeles City Council resigned from public office Wednesday, three days after a recording surfaced of her making racist remarks in a meeting that is now the subject of a state investigation.

Nury Martinez, the first Latina to hold the top post on the council, announced her decision in a press release following a groundswell of outrage and calls for the resignations of her and two other council members involved in the conversation recorded last year.

Martinez made racist remarks about the Black son of a white councilman and other crude comments.

Her resignation statement did not address those comments, though in words directed at her daughter she said: “I know I have fallen short recently of the expectations we have for our family. I vow to you that I will strive to be a better woman to make you proud.”

The announcement was made several hours after Attorney General Rob Bonta said he would investigate Los Angeles’ redistricting process that the three council members discussed with a labor leader in which they schemed to protect Latino political strength in council districts.

Martinez had stepped down as council president on Monday while still holding onto her council seat. Her decision to give up her seat came as President Joe Biden was due to arrive in Los Angeles a day after he condemned the remarks and called on all three council members —Martinez, Kevin de León and Gil Cedillo— to resign.

Bonta, a Democrat like the three council members, said his investigation could lead to civil liability or criminal charges, depending on what is found.

“It’s clear an investigation is sorely needed to help restore confidence in the redistricting process for the people of LA,” he said.

Bonta spoke in Los Angeles while the council tried unsuccessfully to conduct business nearby amid the uproar triggered by the recording of crude, racist comments that also provided an unvarnished look into City Hall’s racial rivalries. Those involved in the leaked conversation were all Latinos, while Bonta is the first Filipino American to hold the top law enforcement job in the nation’s most populous state.

The council reconvened Wednesday, possibly to censure the three members, but it was unable to do business because a crowd of about 50 protesters drowned out the acting president chanting slogans such as, “No meeting without resignation.”

A minimum of 10 out of 15 members necessary for a quorum had assembled, but the meeting was adjourned when one left. None of the three embattled council members showed up.

Acting Council President Mitch O’Farrell said that with no sign of anger subsiding, he didn’t think the council could resume its work until all three are gone, which he said is inevitable.

“For Los Angeles to heal, and for its City Council to govern, there must be accountability,” he said in a statement. “I repeat my call on Councilmembers de León and Cedillo to also resign. There is no other way forward.”

The council cannot expel members—it can only suspend a member when criminal charges are pending. A censure does not result in suspension or removal from office.

Martinez said in the recorded conversation that white council member Mike Bonin handled his young Black son as if he were an “accessory” and said of his son “Parece changuito,” or “he’s like a monkey,” the Los Angeles Times reported Sunday. She also referred to Bonin as a “little bitch.”

At another point on the hourlong recording, Martinez called indigenous immigrants from the Mexican state of Oaxaca ugly and made crass remarks about Jews and Armenians.

Martinez made history in 2019 when she became the first Latina elected to the council presidency and described herself as “a glass-ceiling shattering leader who brings profound life experience as the proud daughter of working-class immigrants” on her website. She is the daughter of Mexican immigrants and was born and raised in the San Fernando Valley.

The discussion —which also included a powerful Latino labor leader, who has since resigned— centered on protecting Latino political power during the redrawing of council district boundaries, known as redistricting. The once-a-decade process can pit one group against another to gain political advantage in elections.

Bonin was among those who had said the three council members should resign. Other members also called for the trio to step down.

Black and Latino constituents often build alliances in politics. But tensions and rivalries among groups separated by race, geography, partisanship or religion have a long history in Los Angeles and, indeed, the country. The friction can cross into housing, education and jobs —even prisons— as well as the spoils of political power.

Bonta had condemned the members’ remarks without adding to the calls for them to resign. He said Wednesday that his investigation was just beginning.

“It could lead to criminality if that’s where the facts and the law dictate,” he said. “There’s certainly the potential for civil liability based on civil rights and voting rights laws here in the state of California.”

The Los Angeles Times reported that the recording was posted on the social medial site Reddit by a now-suspended user. It is unclear who recorded the audio, who uploaded it to Reddit and whether anyone else was present at the meeting.