Why Venezuelans and Cubans Are Coming to Texas in Record Numbers 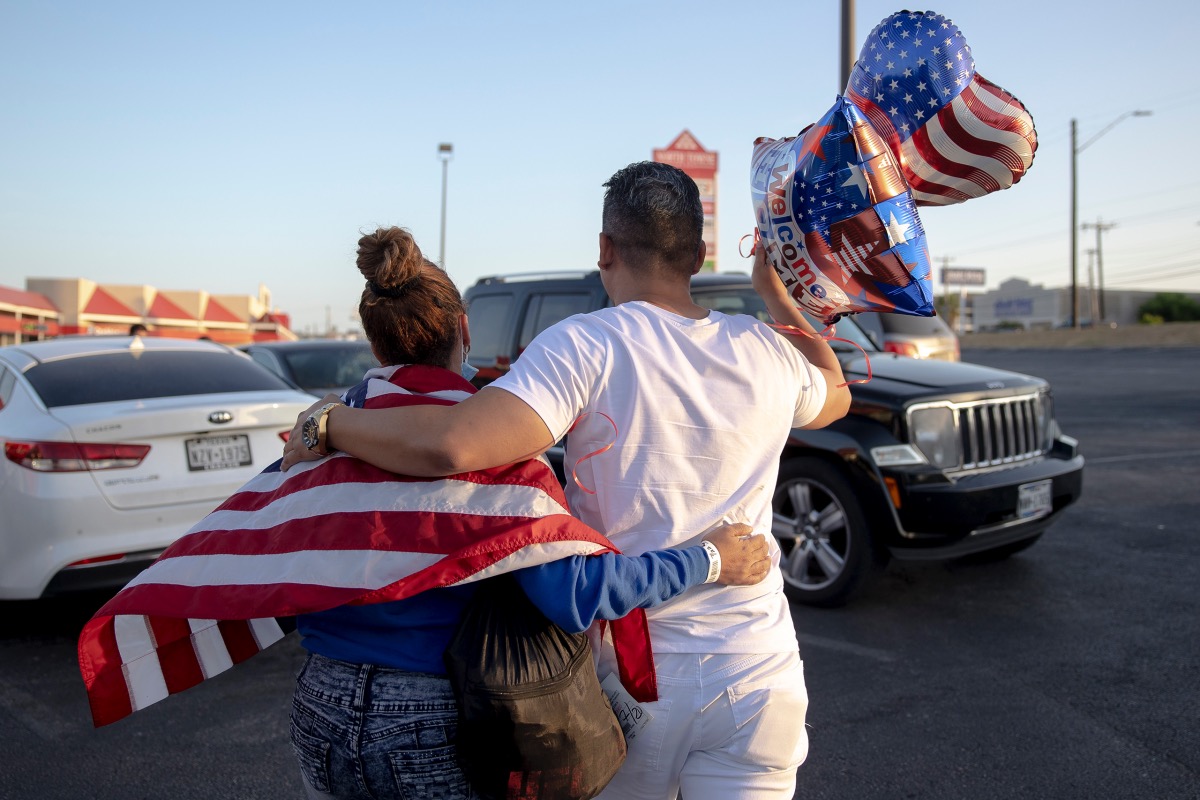 Milenes Chales, 30, of Cuba, embraces her brother, Miguel Gonzales Chales, who picked her up from the city’s migrant resource center in July. (Nick Wagner/San Antonio Report)

SAN ANTONIO — When Reineldys Romero crossed the Rio Grande by foot in Piedras Negras, Coahuila, a Mexican law enforcement officer commanded him to return to the other side of the river.

Because Romero was already in the water, he was out of the officer’s jurisdiction. He told the officer, “I prefer to die here now (rather than) returning to Cuba.”

Romero, 38, arrived at the San Antonio Migrant Resource Center in late August. He comes with information technology skills and plans to find work wherever he can to send money for basic necessities back to his family in Cuba.

In early September, 24-year-old migrant Leidi Carreño left Venezuela. She arrived at the Texas-Mexico border on September 29. The journey from the border to San Antonio was “traumatizing,” she said, as she felt she was treated like a criminal.

Carreño left her job as a bank receptionist in Venezuela, where she said she made the equivalent of $10 in U.S. currency every 15 days.

While crossings were depressed during the height of the pandemic, the increase from both countries in recent months is steep. In fiscal year 2020, the federal border agency recorded just 3,360 Cubans and 443 Venezuelans crossing into Texas.

Yet while Venezuelans and Cubans are currently crossing the border in roughly equal numbers, Venezuelan migrants make up the vast majority of people coming through San Antonio’s migrant resource center.

Venezuelans made up roughly 90 percent of the migrants served by San Antonio’s migrant resource center through early September, according to figures supplied to the San Antonio Report by the city last month. Cubans make up the second largest group, followed by migrants from Nicaragua, Guatemala, and Colombia, according to city figures at the time.

Migrants coming from Venezuela and other countries travel by foot, risking their lives by passing through Colombia’s Darién Gap, often with children. With no guide or map, they are often unprepared for the mountainous terrain and run the risk of drowning in the jungle’s powerful rivers.

Outside San Antonio’s migrant resource center, people have told harrowing stories of the journey, including witnessing or meeting migrants who were assaulted, threatened, raped, or killed, sometimes by snake bite. 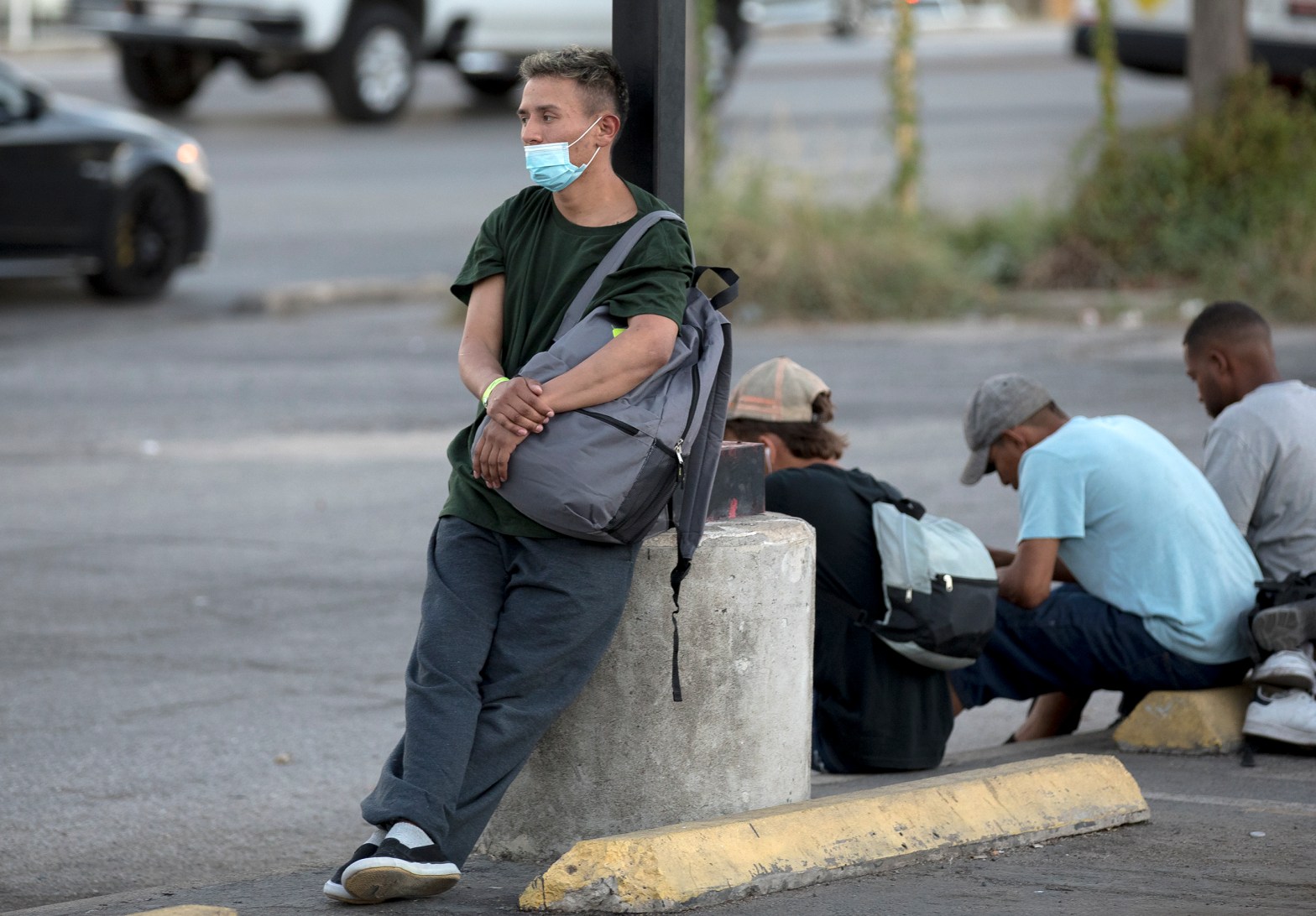 Even after surviving the deadly Darién Gap, migrants face physical duress and financial abuse traveling up through Guatemala and Mexico for a chance at a new life in the U.S.

Asylum seekers say they are fleeing the effects of the authoritarian governments in each country.

Historically, a majority of Cubans and Venezuelans have entered the U.S. through Florida, but after Nicaragua loosened its visa requirements in 2021, more migrants have chosen to travel up through Nicaragua, El Salvador, Guatemala, and into Mexico and Texas.

Rogelio Sáenz, a professor of demography at the University of Texas at San Antonio, said migrants coming through Texas instead of Florida have been part of a growing trend since 2015.

“It’s expensive to get to Nicaragua and to the U.S., and it’s dangerous as well. But it’s more expensive and more dangerous with respect to the boats from Cuba to Florida,” Sáenz said.

He echoed what migrants in San Antonio say about why they left their home countries: a combination of unrest, significant inflation, food shortages, long lines to get basic necessities, and protests against the government.

Why Migrants Are Fleeing Cuba

In the summer of 2021, the economic crisis in Cuba was exacerbated by the COVID-19 pandemic and led to deteriorating living conditions, electricity outages, and shortages of food and medicine throughout the island. This sent thousands into the streets, protesting shortages and demanding an end to the dictatorship of Communist President Miguel Díaz-Canel.

As Cubans protested the lack of alternative political parties, no free press, arbitrary detention, short-term imprisonment, and internet outages, many were beaten by police and arrested.

Most recently, the island has been slammed by Hurricane Ian. No electricity and rolling blackouts have led to more protests in Cuba’s capital, including some of the largest demonstrations since widespread anti-government rallies in July 2021.

In the streets, people chant, “Turn on the lights” and “Freedom,” aiming their criticism at Díaz-Canel.

“People are selling their homes, their vehicles, selling whatever they can sell to be able to come to the U.S.,” Sáenz said. 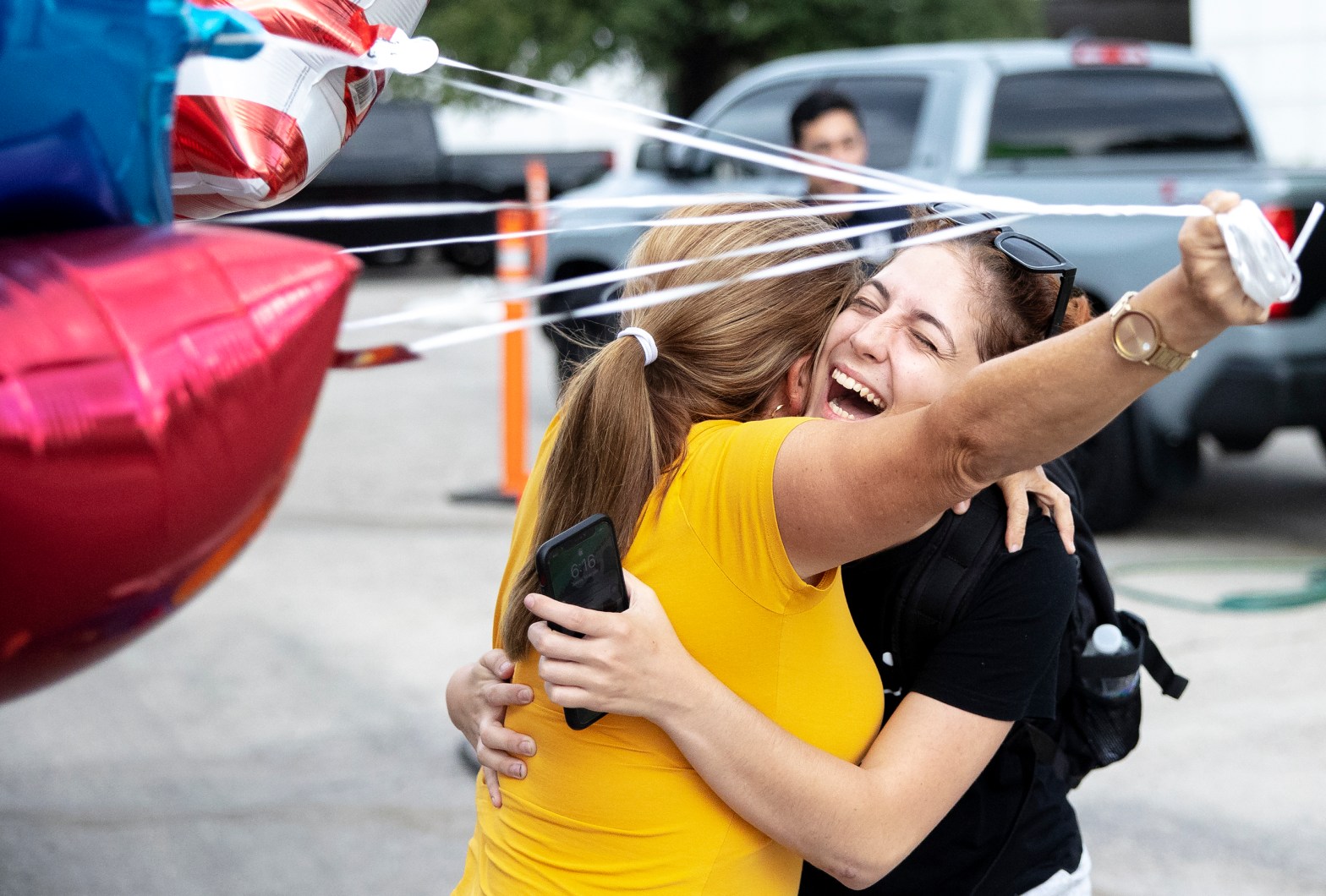 According to Sáenz, between 2010 and 2019 the Cuban population in Texas more than doubled, and it nearly quadrupled in 2019. Right now, Cubans represent the sixth-largest Latino group in Texas.

“Cuba is in the dust,” Romero said. “The country’s economy is critical. People eat once a day… This is the only way I can help my family.”

Coming to the U.S. was the last resort for Romero. When the Cuban peso plummeted in January, Romero’s family had already been facing financial hardships.

“It’s impossible to build your home. It’s impossible to purchase basic necessities, like food, personal hygiene (products). The only people who have access to those things are those who have family abroad, who send their family money,” said Romero, who had been an IT teacher in Cuba.

To escape the poverty in Cuba, Romero moved to Venezuela. But once there, Romero said he never made more than $20 in American currency a month. “I didn’t live with that (salary)—I survived with that,” he said.

And so Romero made the decision to move again, this time heading north to the U.S.

He left behind his father, sisters, and daughters in Cuba. After leaving San Antonio’s migrant resource center, Romero said he would travel to New York to find work, continue his asylum process, and buy things his family needs to mail to their home in Cuba.

Why Migrants Are Fleeing Venezuela

In Venezuela, conditions are equally dire.

Once a prosperous nation thanks to its oil exports, the economy has all but collapsed due to the failed economic policies of Nicolás Maduro, who has taken away citizens’ freedoms in an attempt to emulate communist Cuba, experts say.

Millions of Venezuelans have left the country, fleeing violence, insecurity, threats, lack of food, medicine, and essential services. Most have relocated to other Latin American countries.

That in turn has overwhelmed the governments of those countries, explained Yuliana Martinez, a Colombian immigrant and entrepreneur, during the San Antonio Report’s CityFest panel on the immigration experience.

“As much as we want to support, my country doesn’t have the resources to help them,” Martinez said. The fact that people walk for weeks to get to the U.S. border illustrates that migrants do so as a “last resort.”

“It’s not that they have been planning all their life, saving all their life to live what we call ‘The American Dream,'” she said. “We have to be honest about the situation… It’s because they don’t have any other option.”

Sáenz says that the Venezuelan population in Texas tripled between 2010 and 2019. 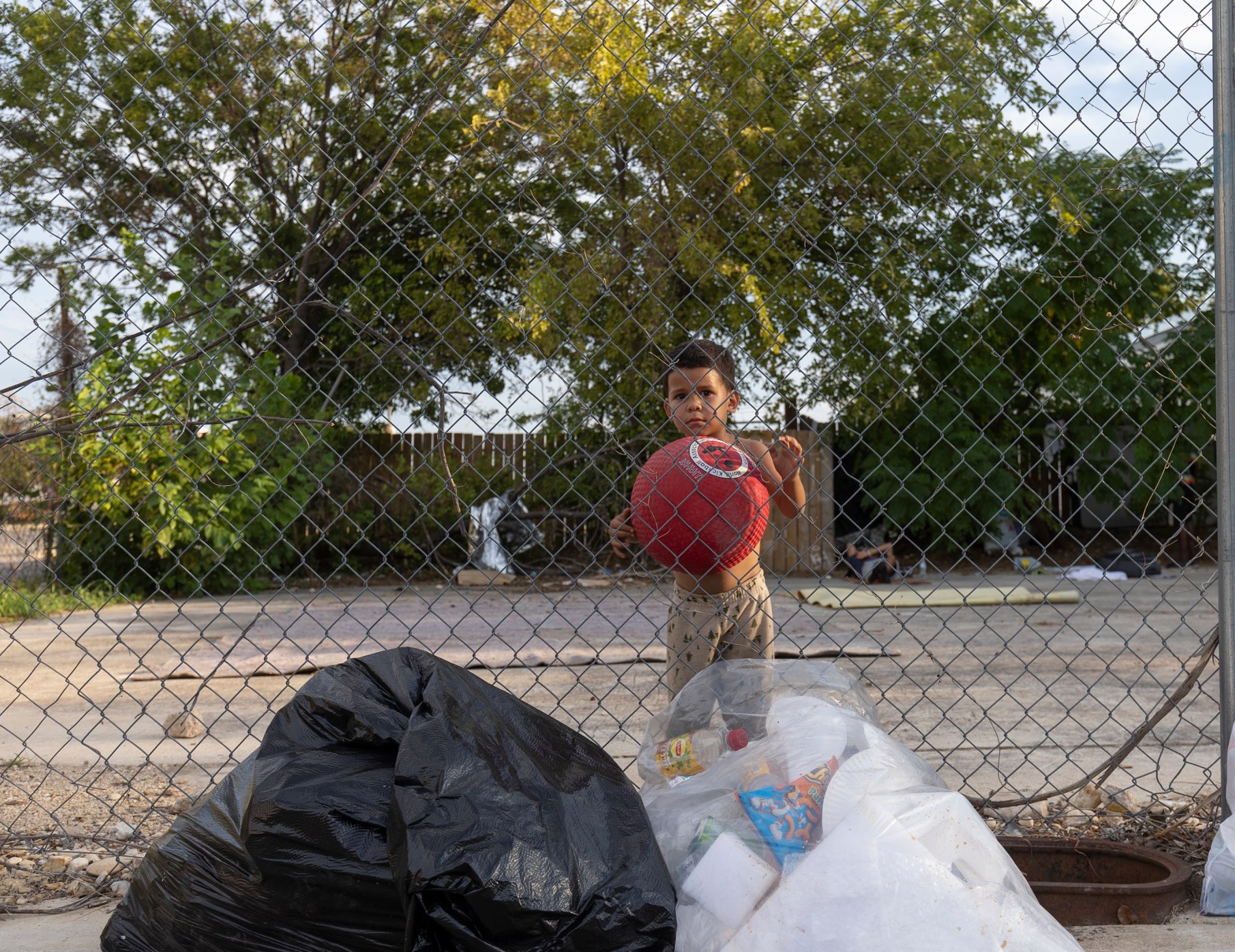 Sebastián Hidalgo, 3, holds a ball near bags of trash in a vacant lot close to the migrant resource center in September. Hidalgo immigrated with his mother from Venezuela. (Bria Woods/San Antonio Report)

Texas has always been a popular destination for Venezuelans, as he explains, due to the relationship with Venezuela’s oil industry in the 1970s. Engineers would travel to Texas to work or trade oil imports.

Now, however, migrants like Carreño make the journey out of survival.

As she sat on a curb right outside the migrant resource center on October 3, Carrreño shared her mixed feelings for what she had most recently endured at the border: handcuffs, wondering if she’d be deported, being separated from her partner, and a “nasty” border patrol agent who processed her in Laredo.

After dodging dangerous risks together across Central America and Mexico before entering the U.S., Carreño said the separation from her boyfriend and travel partner frightened her. She cried for days.

The couple reunited in San Antonio. They were trying to decide whether to head to Washington State, where they were assigned their asylum hearing, to New York or even perhaps to Indiana, where Carreño’s partner heard there are job opportunities. Their goal, she says, was simply to follow through their asylum process and get jobs to send their families money.

No matter where they come from, city immigration liaison Mayra Montero said during the CityFest immigration panel that San Antonio is collaborating with community partners to make the city a welcoming space for immigrants.

“What I see here with immigrants and refugees is that, although they all have different reasons why they flee their home country, they all want just to have a good life, opportunities for employment, education, to integrate,” she said.

“San Antonio wants you to feel that you have the opportunity to be who you are. To honor your culture, to honor your history, to honor the stories you share.”

Romero recalls feeling a sense of pure freedom after crossing the Rio Grande.

“When I came here, I said, ‘I’ve arrived in my country.’ I felt such peace, security, joy. I felt happy,” he said.” I feel more secure than in Cuba. I sincerely feel free to express myself, to think. I feel free in every sense of that word ‘free.’”

Raquel Torres is the San Antonio Report’s breaking news reporter. She previously worked at the Tyler Morning Telegraph and is a 2020 graduate of Stephen F. Austin State University. Twitter: @raquelltorrres