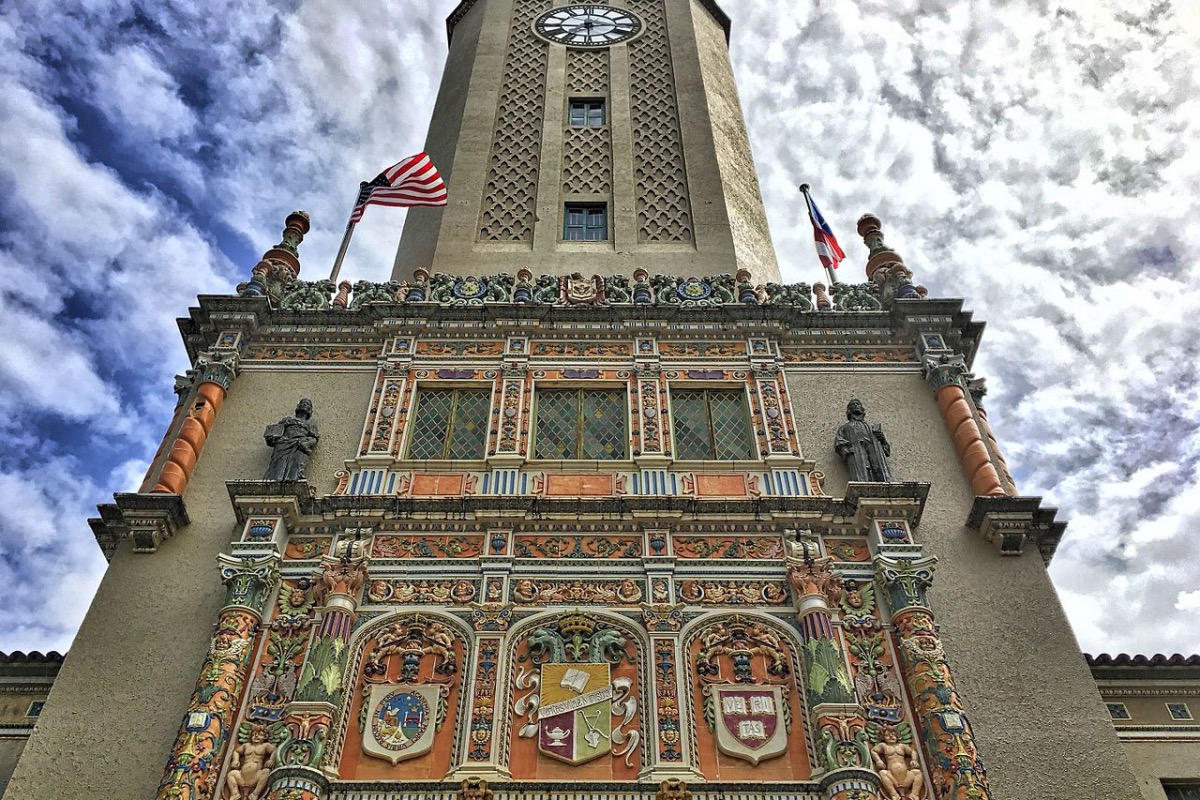 Clock tower at the University of Puerto Rico (Alan Levine/CC BY 2.0)

PUERTO RICO: A judge on Wednesday ordered Iván-Santell Velázquez, a former student at the University of Puerto Rico, to serve 13 months in federal prison and two years of supervised release after he pleaded guilty to cyberstalking.

Between 2019 and 2021, Santell-Velázquez hacked several Snapchat accounts, through which he was able to acquire private nude images that he then uploaded to third parties who published the images online. Santell-Velázquez also targeted over 100 student email accounts of students, faculty, and administration using phishing schemes to successfully break into several university accounts.

After the plea agreement, 15 women and the University of Puerto Rico were identified as victims of Santell-Velázquez.

BRAZIL: Right-wing incumbent President Jair Bolsonaro and former president and leftist candidate Luis Inacio Lula da Silva faced off in a televised presidential debate in São Paulo on October 16. The exchange was heated—both accused each other of being liars, corrupt, and criminals.

In the final weeks leading up to the October 30 run-off, da Silva is shown to have a five percent lead over Bolsonaro. A poll conducted by Datafolha released on Friday, October 14, showed da Silva with 49 percent of voter support and Bolsonaro with only 44 percent.

When accounting for only valid votes (excluding blank or invalid ballots), da Silva is set to win with 53 percent of votes while Bolsonaro pulls in 47 percent, according to the same poll.

CHILE: Security will be improved on cargo trains carrying copper as a response to armed railroad robberies in northern Chile. Chilean company Ferrocarril Antofagasta Bolivia suspended railway circulation of copper earlier this month, citing the risk that lack of security posed for employees. Others, such as state-owned Codelco and Global BHP Group, were also forced to consider transportation alternatives.

The country’s prominent mining industry contributed 15 percent of Chile’s GDP in 2021, with mining exports accounting for 62 percent of the nation’s total exports.

ECUADOR: Ecuador’s private oil company on Friday disclosed a spill in the country’s Amazon region, saying it was caused by vandalism. One of the company’s operators reported damage to decommissioned tubing which ruptured and spilled crude oil into the environment.

The incident occurred on Thursday in Piedra Fina in the country’s Napo province. The damage did not disrupt operations of the Heavy Crude Pipeline (OCP in Spanish), the operator added. The company was able to control the incident and began cleanup operations but did not disclose how much oil was spilled.

The area where the damage occurred has been affected by erosion since 2020. In January 2022, OCP’s pipeline ruptured, contaminating more than 20,000 square meters of the Cayambe Coca National Park.

VENEZUELA: During a meeting held earlier last week in Panama, Venezuela’s opposition agreed to organize primary elections at the end of June 2023 to select a single presidential candidate. The opposition coalition, called the Unitary Platform, will make a formal announcement sometime next week.

President Nicolás Maduro has not ruled out the country’s 2024 presidential elections. However, Venezuela’s national electorate council—the country’s highest elections authority—has not determined a date yet.

International agencies and governments do not recognize the results of the 2018 election. The country’s interim government, led by Juan Guaidó, accused Maduro of election fraud. Maduro has rejected all accusations.

HAITI: Gangs in Haiti have taken control of major terminals blocking access to work, markets, and food aid for residents. The country’s officials on Friday said that the rising violence and armed groups fighting for control in the coastal neighborhood of Cité Soleil are of prime concern.

After the government announced that it would receive aid from international troops, thousands of people took to the streets of the capital Port-au-Prince on Monday to protest against “foreign occupation.”

The entire country is facing a political, economic, security, and health crisis. Haiti’s National Police has not been able to control the armed groups because of limited resources and staffing shortages, with only 12,800 active officers in a nation of 11 million people.

HONDURAS: A federal judge in New York on Thursday sentenced a former Honduran congressman to 30 years in prison for his role in a drug trafficking operation that prosecutors say imported more than 30 tons of cocaine into the U.S.

According to a press release from the Office of U.S. Attorney Damian Williams, Fredy Renan Najera Montoya “abused his position as a Honduran congressman to lead large-scale and violent drug-trafficking activities” from 2008 to 2015 in the region he represented. Najera “constructed, maintained, and staffed” secret airstrips that were used to traffic cocaine from Venezuela, as well as used law enforcement information to help traffickers avoid arrests.

Aside from 30 years in prison, Najera was ordered to forfeit $39 million and pay a $10 million fine.

NICARAGUA: Nine prisoners including clergymen, seminarians, and journalists will face public trial on December 1 in Managua on charges of “conspiracy to undermine national integrity” and “propagation of fake news,” according to the Office of the Attorney General of Nicaragua.

Three priests, a deacon, two seminarians, and a cameraman were arbitrarily detained in the Episcopal Curia of Matagalpa for 15 days between August 4 and 19 before being transferred to El Chipote. While criminal proceedings began, the charges against them went unknown until 13 days after.

Additionally, two journalists were accused of “conspiracy” and “propagation of fake news.” These actions are part of a larger set of legal actions taken against various members of the clergy and journalists.

MEXICO: The Mexican government published new COVID-19 guidelines on Tuesday that eliminated the obligatory use of face masks in outdoor or indoor spaces.

Updated COVID-19 guidelines come on the heels of a fifth wave of the disease which, since 2020, has caused seven million confirmed cases and 330,000 deaths, figures that are considered undercounts due to lack of testing. The Health Ministry currently estimates that there are currently just over 5,500 active cases.

According to the document, the guidelines have the goal of “continuing work activities in a safe and responsible manner.”

UNITED STATES: All Venezuelans who enter the United States without prior authorization will be turned away and returned to Mexico under new migration enforcement protocols announced by the Department of Homeland Security (DHS). The updated migration enforcement protocols are bolstered by a public health regulation that has been enforced since the start of the COVID-19 pandemic. According to the press release, the governments of the United States and Mexico will take “joint action” to “address the most acute irregular migration and help ease pressure on the cities and states receiving these individuals.”

In addition to modified enforcement protocols, both governments will work together to block human smuggling operations. Most notably, DHS announced that it would “lawfully and safely” bring in 24,000 qualifying Venezuelans under a novel immigration procedure, but only if Mexico keeps up its “independent but parallel effort” to accept unauthorized Venezuelan migrants

These actions come at the heels of the U.S. government’s consideration of easing sanctions on Venezuela, which some U.S. officials say could stabilize the country.