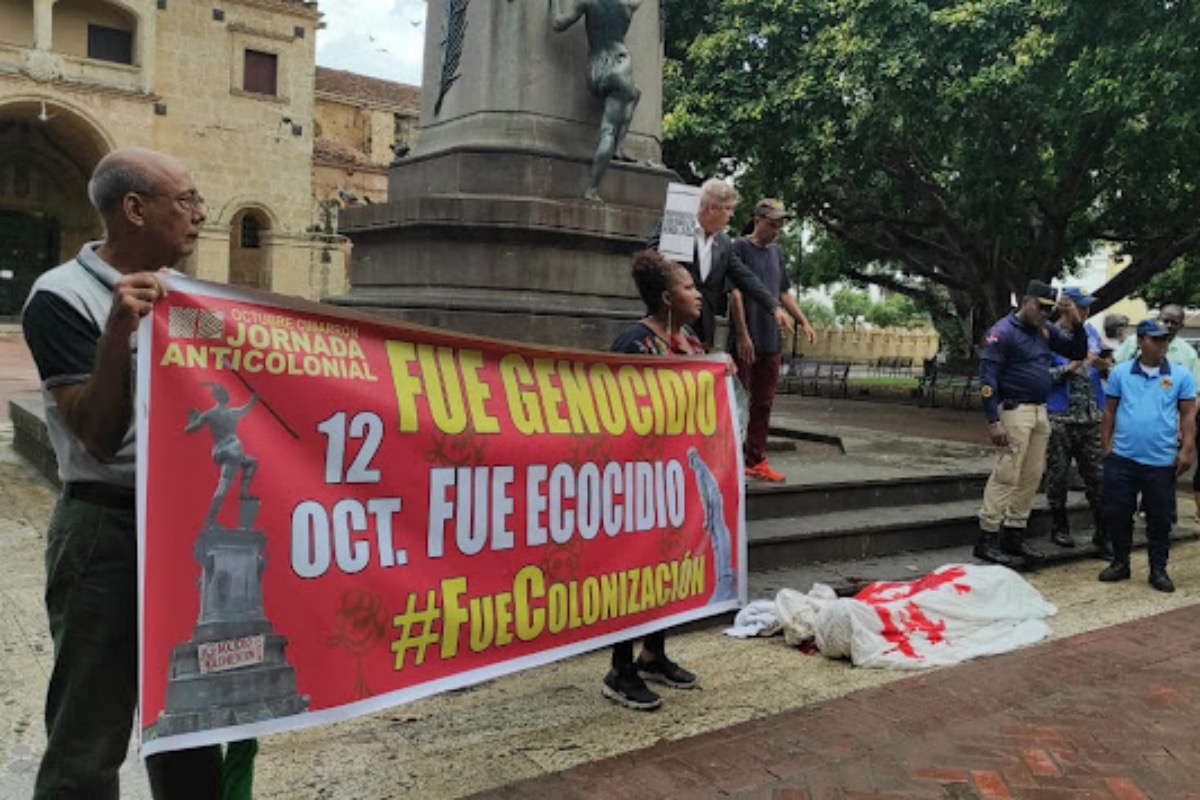 SAN JUAN, Puerto Rico — On Wednesday, October 12 —the anniversary of Christopher Columbus’ arrival in the Americas, a date celebrated by some as “Día de la Raza,” or Day of the Race— activists and artists were attacked in the Dominican Republic’s capital city of Santo Domingo by a right-wing ultranationalist group during a cultural performance that sought to highlight Indigenous and Afrodescendant heritage.

For the past 20 years Afro-Indigenous Dominicans and their allies have organized a counter-demonstration against Columbus and his legacy, dubbed “12 of October Nothing to Celebrate,” an event that mainly consists of performance pieces meant to shed light on the horrors inflicted on the Indigenous Taíno and enslaved African by the country’s European founders.

Members of Anticolonial Action, Acción Afro-Dominicana, Guabancex Viento y Agua, El Grito de los Excluidos, and other groups gathered in front of the statue of Columbus in Parque Colón in the city’s Zona Colonial district to honor Anacaona, a Taíno cacica, or female chief, who was hanged by Spanish colonizers in present-day Haiti.

This year’s event was scheduled for 5 p.m., and photos show an effigy meant to symbolize Anacaona’s murdered body, alongside a banner that read “12 OCT. FUE GENOCIDO/ FUE ECOCIDO/ #FueColonización.”

The gathering was quickly overrun by members of La Antigua Orden Dominicana (The Dominican Old Order), who started tearing apart the costumes and props.

“I thought they were going to lynch us,” artist and activist Alicia Mendez told Latino Rebels, her voice tired and tense as she recalled the day’s events.

Two activists, Jehdy Vargas and Maribel Nuñez, were attacked and had to have their wounds treated at a local hospital. Nuñez believes her attackers targeted her specifically out of the crowd.

“They wanted my head,” Nuñez wrote in the blog Acción Afro-Dominicana, adding the attackers “screamed that we should return to Haiti.”

La Antigua Orden Dominicana, which describes itself as “apolitical,” looks to “recruit young people and guide them to recover the values ​​that the country has lost,” according to an interview with the group’s U.S. coordinator, Elías Santos, who claims it has 1,700 members in the United States alone.

Members sport insignias that read “God, Country, Liberty,” and while they deny it, they style themselves as a paramilitary group, wearing all-black uniforms and masks as they carry banners emblazoned with their insignia and the Dominican flag.

Over the years the group has attacked both Haitians and Dominicans of Haitian descent, saying that their presence in the Dominican Republic is an affront to their homeland. These actions have included multiple marches “against the Haitianization” of the Dominican Republic and continued praise of Juan Puablo Duarte, the 19th-century writer and military leader who helped inspire the revolt against Haitian rule that launched the Dominican War of Independence.

A spokesperson for the group told Latino Rebels that Haitians are its “historic enemies,” further calling back to Duarte’s struggle to separate the Dominican Republic from Haiti.

The same person said that members of the Order were only there “coincidentally,” though the group’s Twitter account held a Twitter Spaces session with the title “Columbus Park Wednesday 12 4PM we will defend our Hispanicness.”

Additionally, the account posted the flier for the “12 of Oct Nothing to Celebrate” a day before the event took place. A comment under the post read: “We have to arrive with bats and rocks.”

Multiple activists present for the event confirmed to Latino Rebels that they were attacked with pipes, flagpoles, and sticks.

“For a long time now, I have not been out at night,” activist and Afro-Dominican writer Maribel Nuñez told Latino Rebels, who said she feared being attacked and perhaps killed by right-wing activists.

She was previously stalked by a man who left her threatening notes, and she worries what the future holds for women like her if the threats against their life continue and La Antigua Orden Dominicana continues its attacks.

“There’s a fear to participate in public things,” Mendez said. “You don’t feel safe. You feel like something is going to happen at any moment.”

Anti-Haitianism has a long history in the Dominican Republic, stemming from the racism perpetrated by white colonialists. In February, the government of President Luis Abinader began building a 118-mile wall along the Dominican-Haitian border.

“They want to boycott every project that smells like Blackness and Haitians to them,” anthropologist and activist Fátima Portorreal said. She notes that the ultranationalists espouse a “homogenous mentality” for the Dominican Republic, attempting to tie themselves back to whiteness instead of the mixed ethnic heritage shared by Dominicans.

On social media, La Antigua Orden Dominicana says its actions spring from “love for their country,” which is a common tactic across right-wing nationalist groups. They hold to Spanish heritage as the defining characteristic of Dominican identity, instead of the reality that Dominicans are a racial and ethnic mix of African, Taíno, and Spanish ancestry.

Some of videos also attempt to use the basics of fashwave, a common aesthetic utilized by online right-wing groups to appeal to a nebulous sense of heritage and tradition, one in which a dominant group rules over others.

La Antigua Orden Dominicana has previously threatened multiple anti-colonial activists and journalists who have reported on their actions.

Earlier this year, the group threatened human rights activist Ana Belique at the International Book Fair in Santo Domingo, where she was supposed to debut her first novel, the bilingual Dieula’s Doll. The Order urged its members to “bring matchsticks” to Belique’s booth through Facebook.

Belique, who is of Haitian descent, has long been the target of the group’s attacks and threats. While the Ministry of Culture was initially supportive of Belique, it eventually canceled her event.

The Order has also threatened to shoot journalist Angela Hernández after she called its members “fascists” and “Hitler’s disciples” at a march in Santo Domingo.

Speaking with Latino Rebels, the group’s spokesperson refuted being called “paramilitary” and “fascist,” saying they did not carry “weapons.”

They also reject the terms, the spokesperson said, because they have their own ideology, called “quisqueyanismo.” Although the person did not explain what that entails, the term is typically used to refer to “Dominican pride.”

The group’s spokesperson also told Latino Rebels about “organizing an international ultranationalism” alongside other countries in “Hispanic America,” and alluded to movements similar to theirs occurring in Poland.

The group did not respond to Latino Rebels’ question as to whether they believe ultranationalist groups representing different nations can exist and operate together.

In 2013, the Constitutional Court issued Judgment TC 168-13, called “La Sentencia” by many, stripping 200,000 Dominicans of Haitian descent of their citizenship by eliminating birthright citizenship for anyone who did not have Dominican or legal resident parents. The decision was made retroactively between 1929 and 2010, depriving additional thousands of people of Haitian descent of their citizenship.

To justify its ruling, the court argued that citizenship was not just a “legal bond” but a “set of historical, linguistic, racial, and geopolitical traits.”

Approximately more than 31,000 people were deported to Haiti in 2021 alone, a spike when compared to previous years, which many activists attribute to Abinader taking office in August 2020. Abinader ended a student-visa program for Haitians and announced an audit of more than 220,000 people who were awarded legal immigrant status.

“These are spaces in the history that has occurred on the island that the majority of people don’t know because people have blurred it to honor colonizers,” Nuñez said. “We celebrate the Día de la Raza, celebrate Columbus’s arrival, and we don’t speak about genocide. Our children dress like colonizers.”

Like many other countries in the Caribbean and Latin America, the common teaching of history in Dominican schools often focuses on Spanish heritage while ignoring the country’s African and Taíno past. Events like “12 of Oct Nothing to Celebrate” are meant to refocus the public consciousness on pieces of their history that are too often forgotten or wilfully ignored.

And while activists fear for their lives, they remain committed to creating spaces where they can share the narratives of their people that have long been ignored and also advocate for anti-colonial and anti-racist action.

“For us it is incredibly important for our people to know the truth and knowing that truth, we can construct a different history, a history free of social oppression,” Nuñez said.

For her part, Portorreal plans to write a letter to President Abinader with the aim of having him address such conservative ultranationalist groups and stop their growth and attacks.

One response to “Afro-Indigenous Activists, Artists Attacked in Dominican Republic by Ultranationalist Group”