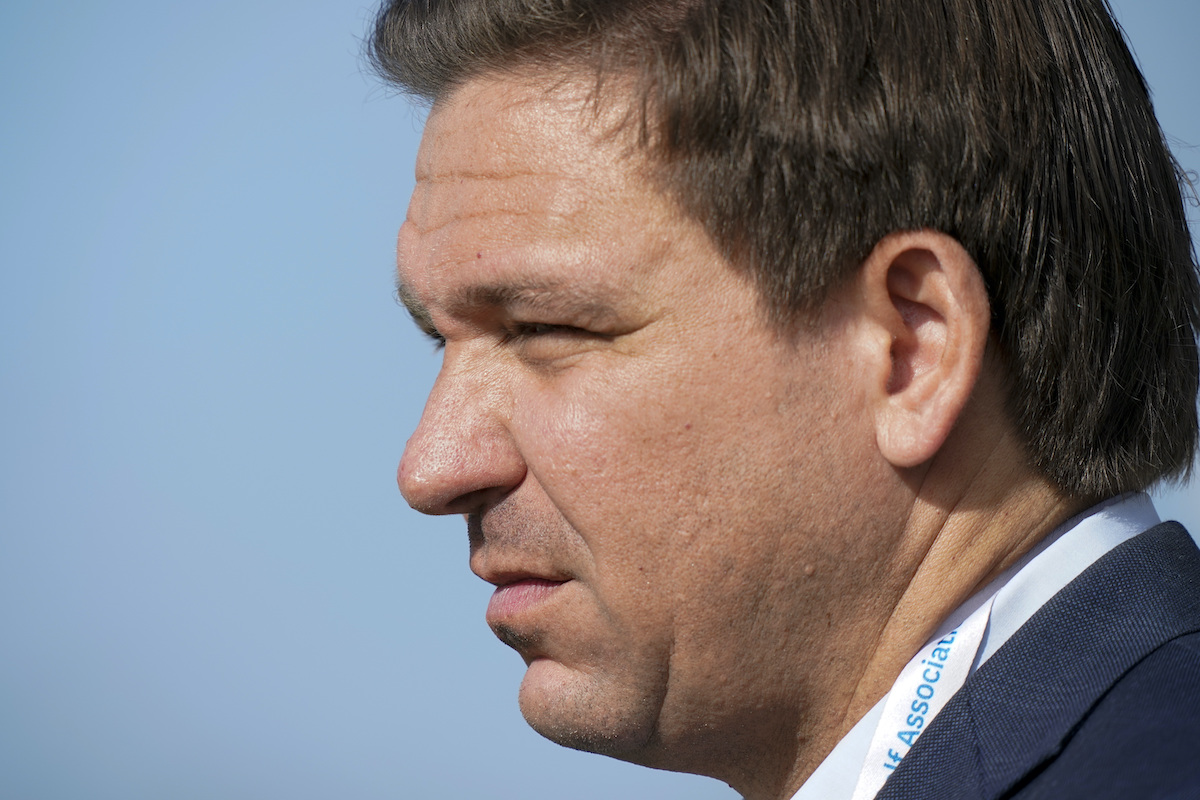 The findings of the poll —conducted by IZQ Strategies for Futuro between October 6 and 11 in Florida, Georgia, and Pennsylvania— show the Republican incumbent and 2024 presidential hopeful DeSantis has a 52 percent favorability rating among Latino voters in the state, compared to 43 percent for President Joe Biden and 48 percent for former President Donald Trump. Republican Sen. Marco Rubio’s favorability is at 50 percent, while his Democratic opponent, Val Demings, has 36 percent favorability.

While validated by other polls, IZQ Strategies founder Gustavo Sánchez, who authored the poll, called DeSantis’ favorability the most surprising result, given the political blowback the Florida governor received in September after transporting mainly Venezuelan migrants to Martha’s Vineyard.

“I expected his recent mistreatment of immigrants to hurt him, but it seems like it didn’t have an impact,” Sánchez told Latino Rebels, which is part of Futuro Media.

“In Florida, Republicans have done a better job reaching out to Latinos than Democrats have,” Sánchez added. “We can see this when we look at the favorable ratings for Val Demings. Over one-third of Latino voters (34 percent) don’t know enough about her to rate her.”

DeSantis also holds a significant 51-42 advantage with Latino voters in the gubernatorial race against his Democratic opponent, Charlie Crist, a former Congressman and governor.

In the Senate race, Rubio had a seven-point lead over Demings. 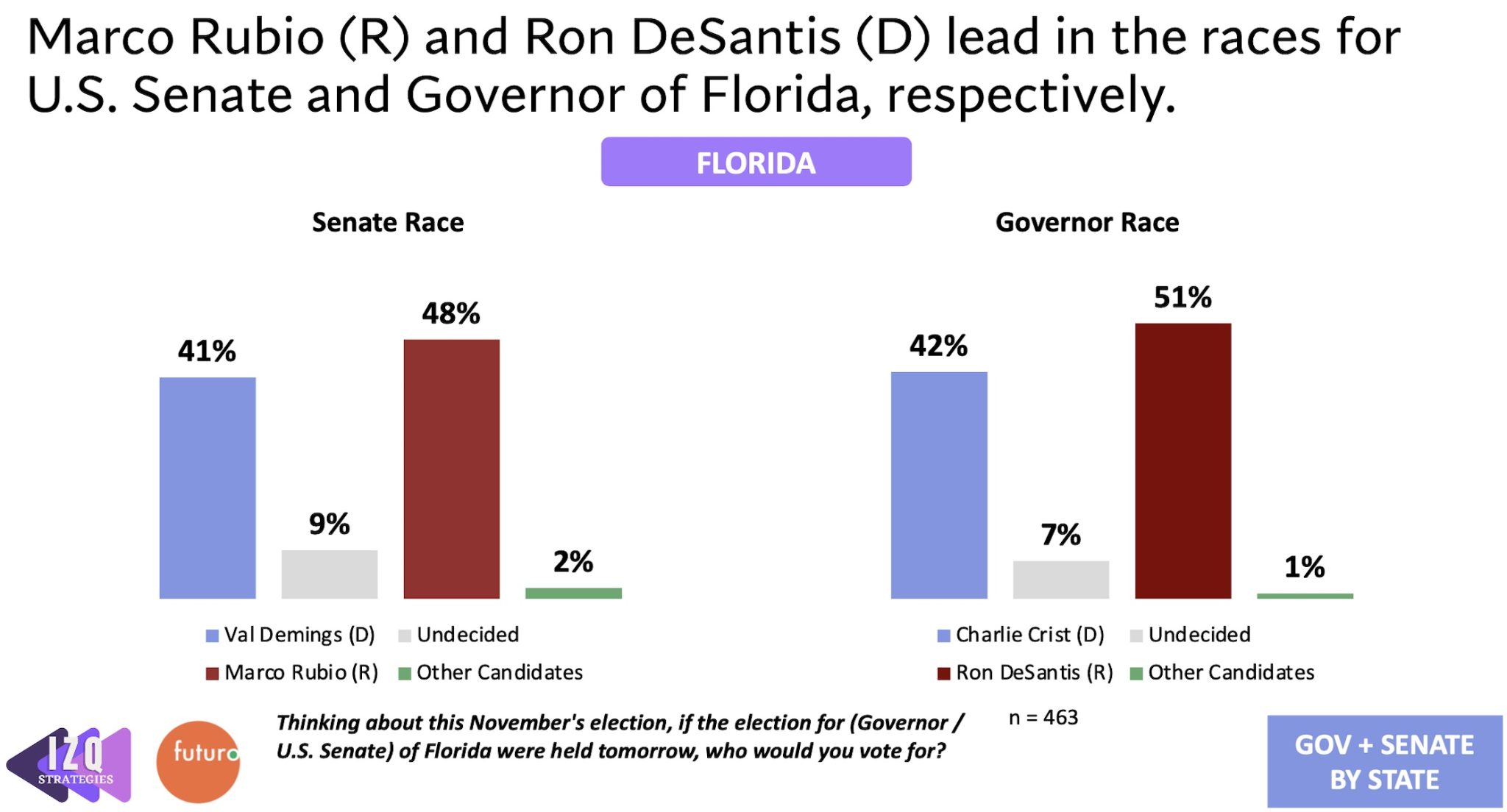 “The Latino vote in Florida is a unique animal because of the solidly Republican Cuban vote, which makes up a huge part of the Latino vote. You couple this with the lack of direct Spanish language advertising to Latinos by national and local Democrats, and it’s no surprise to me to see these numbers,” Chuck Rocha, president of Solidarity Strategies and co-host of The Latino Vote Podcast, told Latino Rebels.

Part of the problem for Democrats, according to the poll, falls squarely on how Latinos in Florida feel about their respective economic situations under the Biden administration. When asked about their own personal financial situations, 52 percent of voters said they have gotten worse. 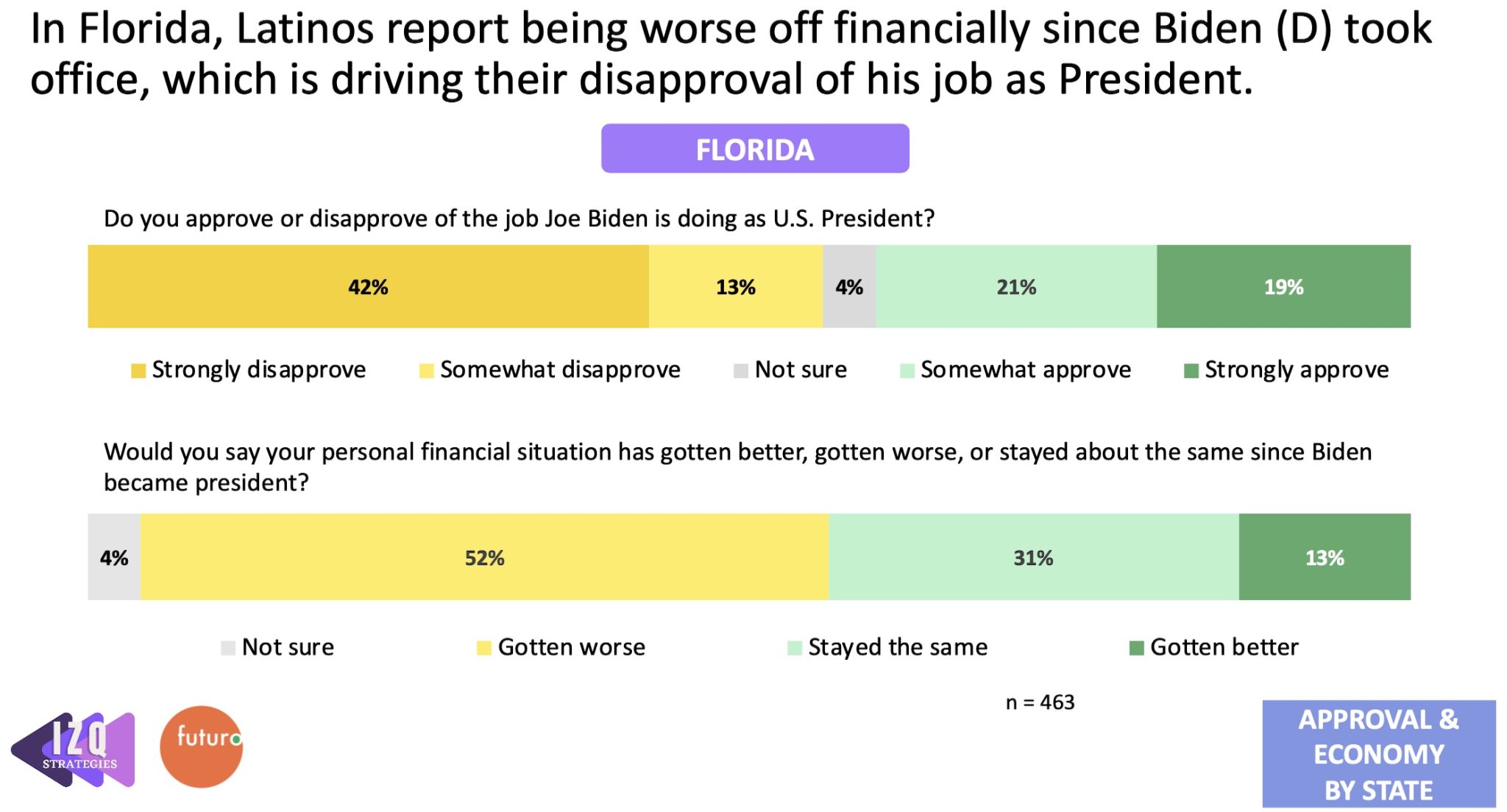 “In our polling we see Latinos making their choices based on how much they know about candidates in terms of the issues and policies they support, and how they have fared economically under Biden’s presidency,” Sánchez said.

In terms of issues key to Latino voters in Florida, the poll asked respondents to identify which issues would make them more or less likely to vote for a candidate who supports a specific policy. Universal health care received the highest percentage (57 percent), followed by the codification of Roe v. Wade (49 percent).

Close to 50 percent of respondents said the issue of investing in publicly-owned renewable energy to reduce energy costs would influence their vote, while another 50 percent said they would not likely vote for a candidate who supported the position of immediately granting citizenship to undocumented immigrants that hadn’t been convicted of a violent crime.

On the issue of decolonization for Puerto Rico and other U.S. territories by allowing them to vote for statehood or independence, 42 percent said it would make them more likely to vote for a specific candidate. 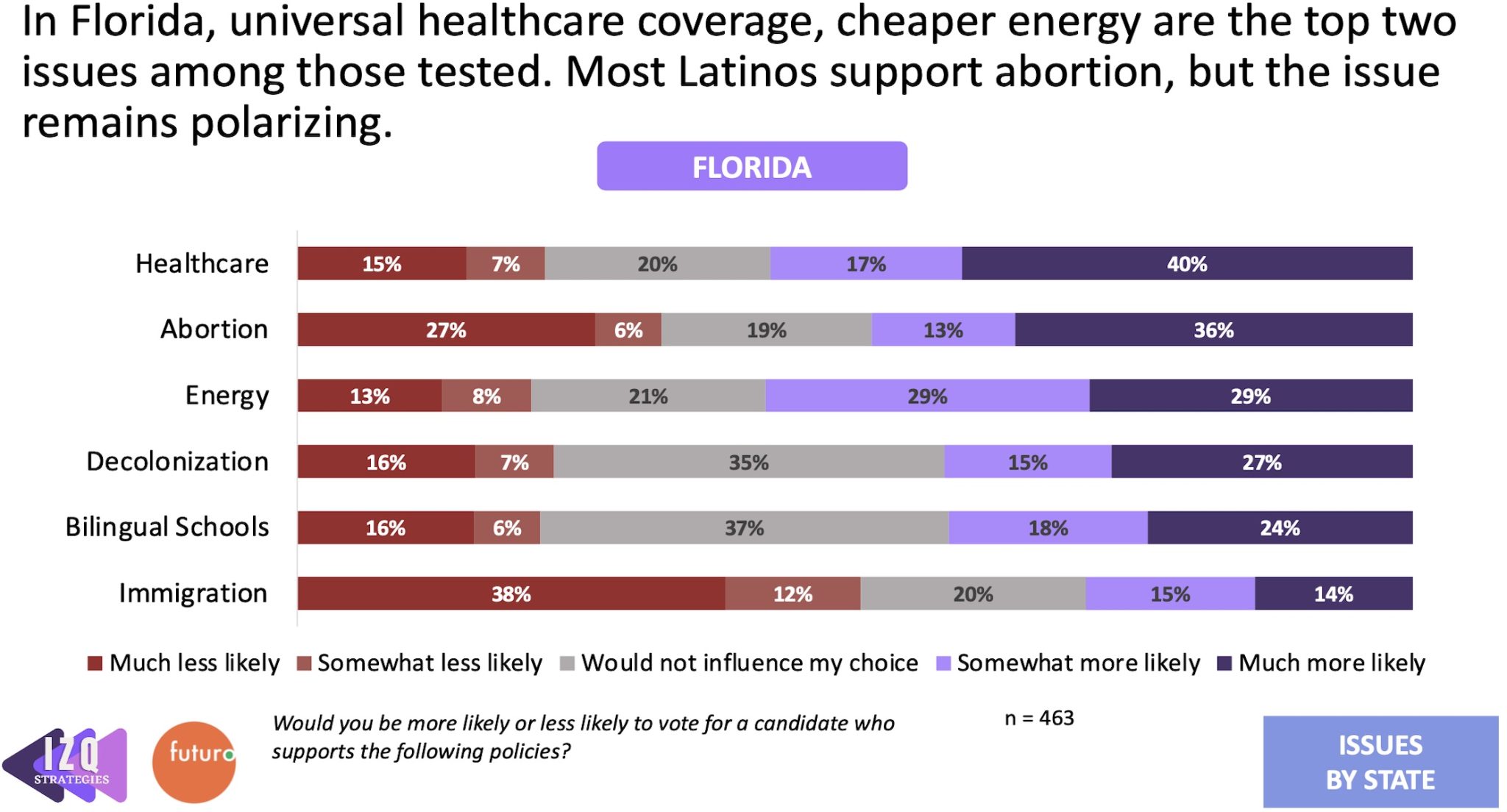 Abortion seems to be a net positive issue to run on for Democrats,” Sánchez said. “There was a chance that focusing so much on abortion would turn the majority of Latinos to the Republican Party. We’ve seen some of that but it seems like it is bringing more Latinos to the Democrats rather than pushing them away. Still, it is a more polarizing issue than some of the other ones we tested, so there were still safer issues that Democrats left on the table.”

The full Florida crosstabs can be found here. Later in the week, Latino Rebels will publish a deeper dive into the Florida portion of this poll, sharing insights from respondents who participated to explain their choices.

The results from Georgia —where six percent of the state’s eligible voting population is Latino— are mixed. In the Senate race, Democratic incumbent Sen. Raphael Warnock has a 52 percent favorability rating with Latinos, while his Republican opponent, Herschel Walker, polled at just 31 percent among Latinos.

In the gubernatorial race, incumbent Republican Gov. Brian Kemp is at 50 percent favorability and Democratic opponent Stacey Abrams is at 48 percent.

President Biden (49 percent) had a higher favorability than Trump (40 percent) and DeSantis (39 percent). 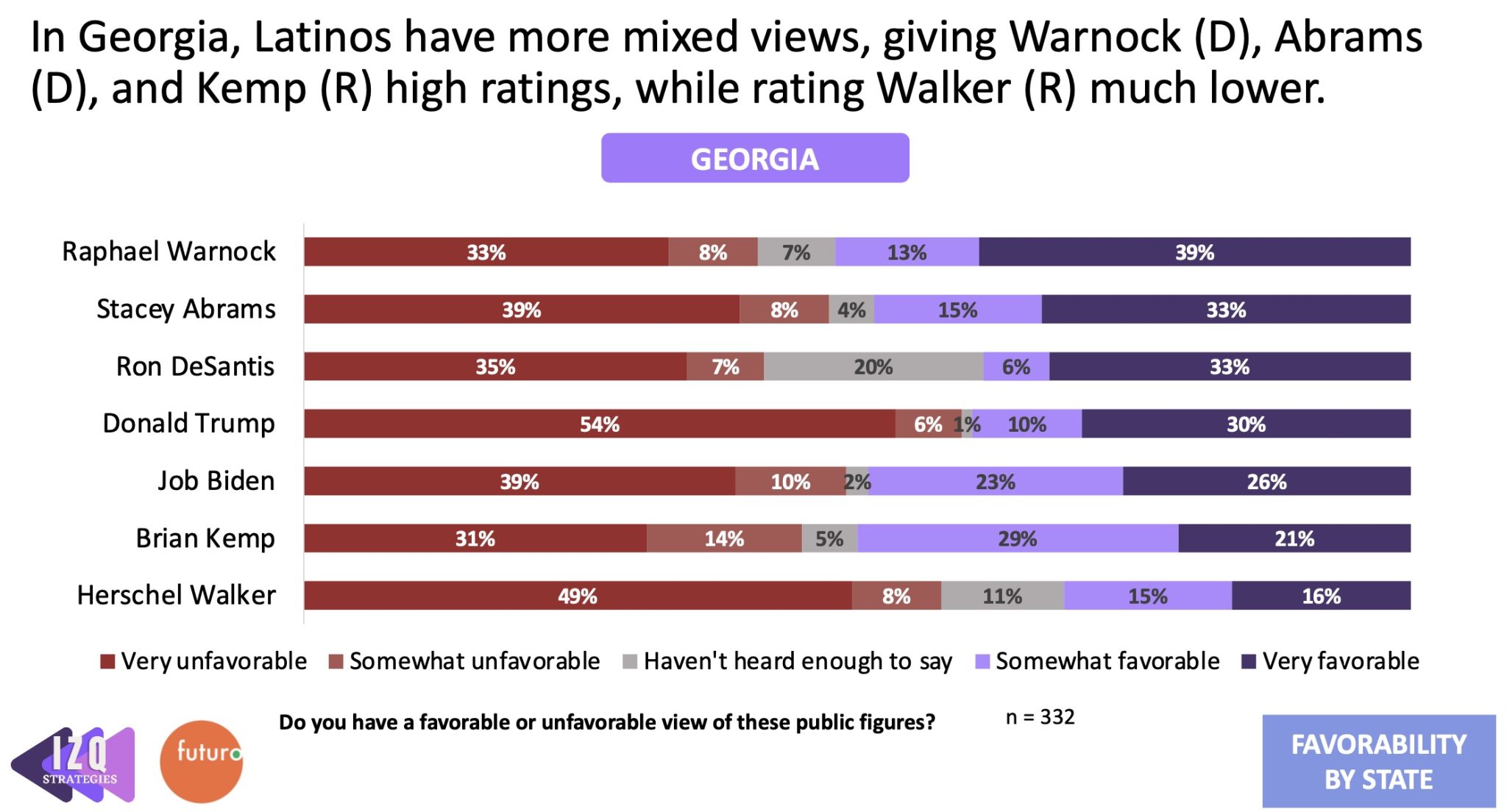 Warnock leads Walker 53-34 with Latino voters, while Abrams has only a 49-46 advantage over Kemp. 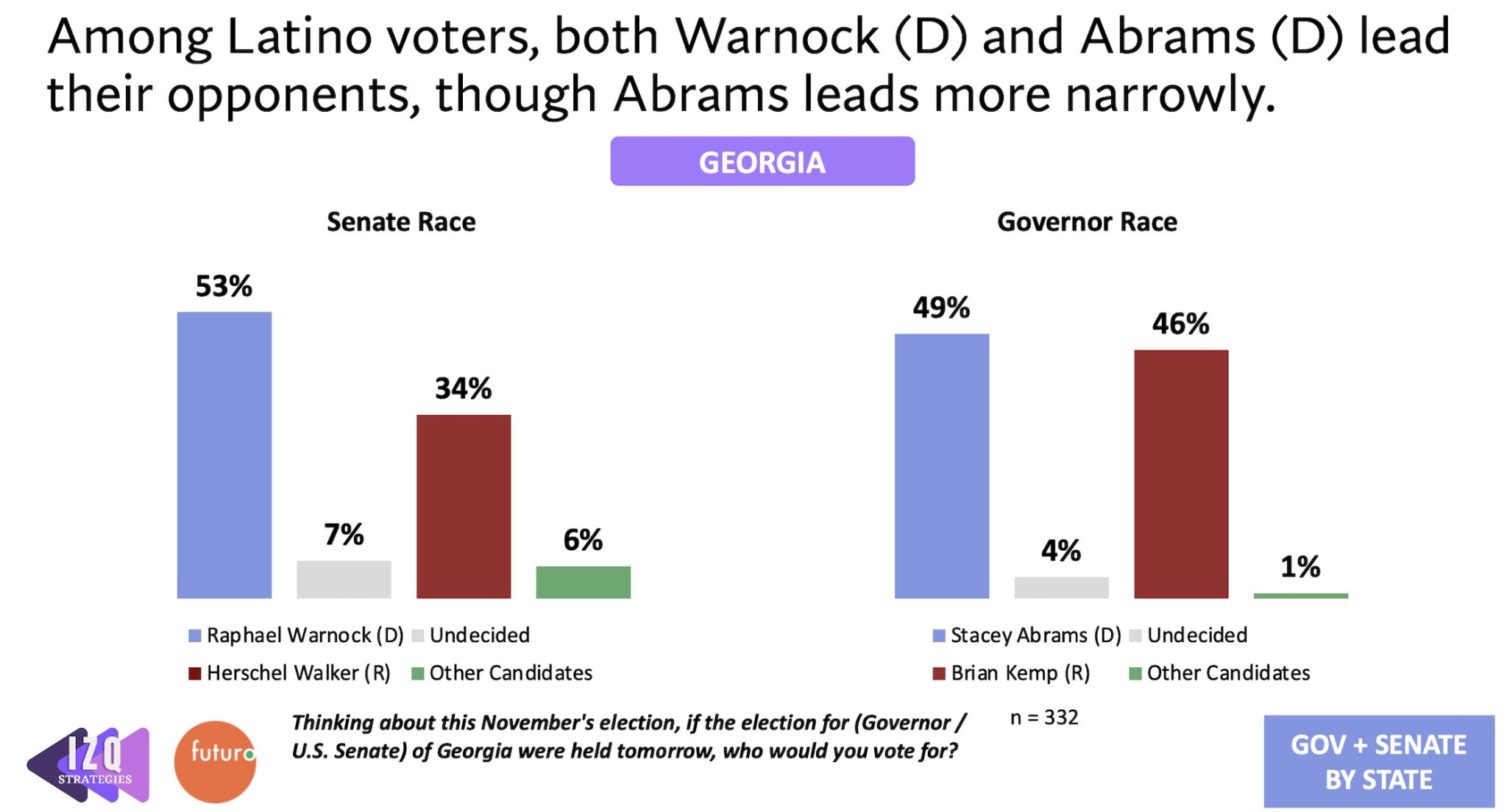 “In Georgia, Democrats and Republicans are both known by Latino voters, so we are seeing candidates, especially Democrats, benefit from their support in the races for Senate and Governor, There is evidence that a combination of racism and sexism among Latinos may be holding Abrams back since she is running against a white man,” Sánchez said about the polling results from Georgia.

The same issues raised with Florida voters were asked of Georgia Latino voters. The breakdown was similar, although one issue —decolonization— had the path of least resistance in terms of support for candidates. 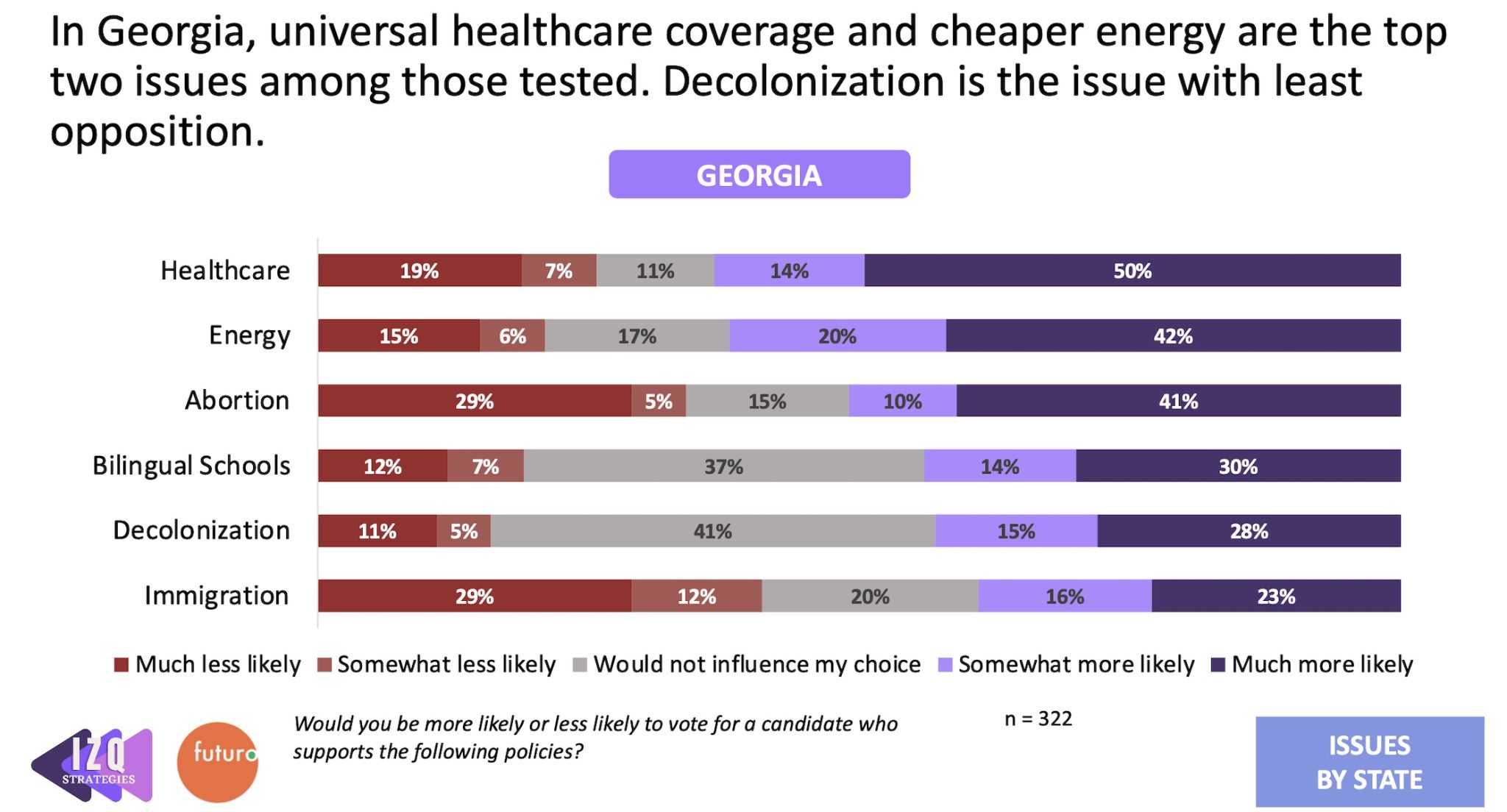 The full Georgia crosstabs can be found here. Latino Rebels will publish more about the Georgia findings and include perspectives from poll respondents.

The state of Pennsylvania continues to be solidly blue for Latinos, with Democratic candidates John Fetterman and Josh Shapiro earning 49 percent approval ratings and President Biden’s at 56 percent.

Fetterman’s Senate opponent Dr. Mehmet Oz has an approval rating of 26 percent, while Shapiro’s gubernatorial opponent Doug Mastriano is at 27 percent. Trump has a 32 percent rating, and DeSantis is at 33 percent. 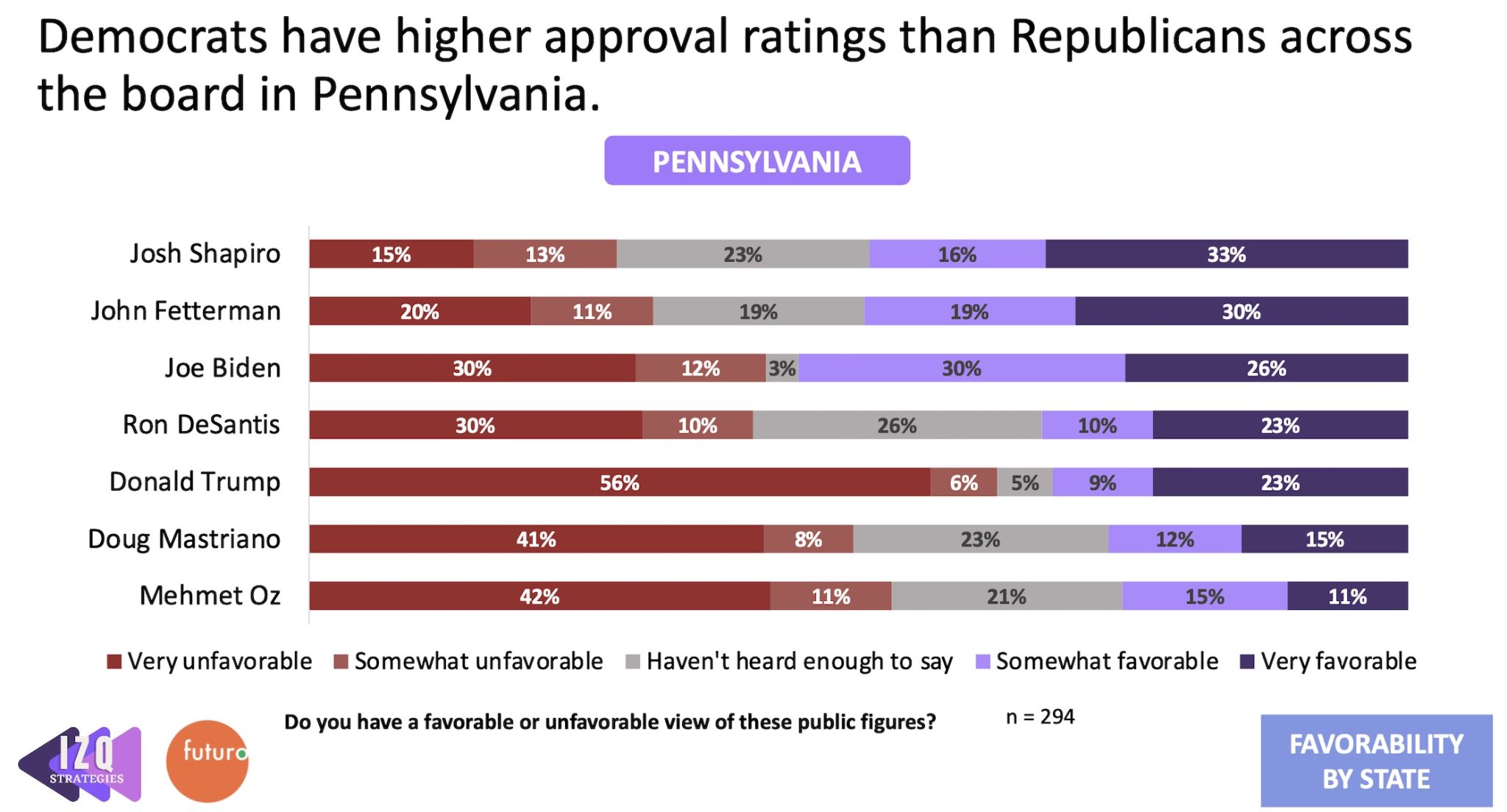 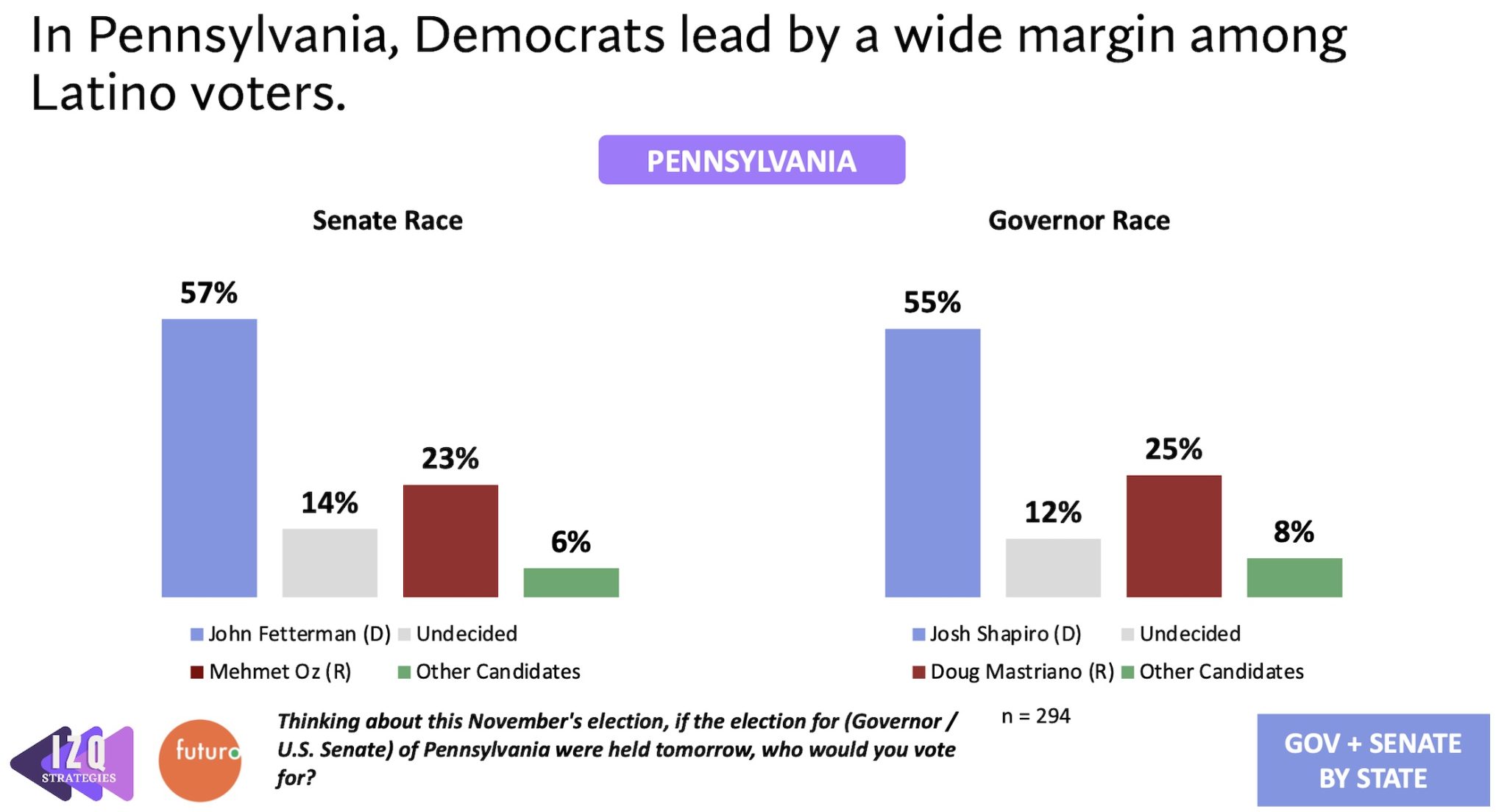 “In Pennsylvania, Democrats are benefiting significantly from Latino support, yet they have left many Latinos they could have won on the table. If Fetterman loses his Senate race in November to Oz, we can say it is likely he would have won had he begun courting Latino voters earlier. His campaign has done a good job once they started, but they started far too late,” Sánchez said.

Like Georgia, Latinos represent six percent of all eligible voters in Pennsylvania. 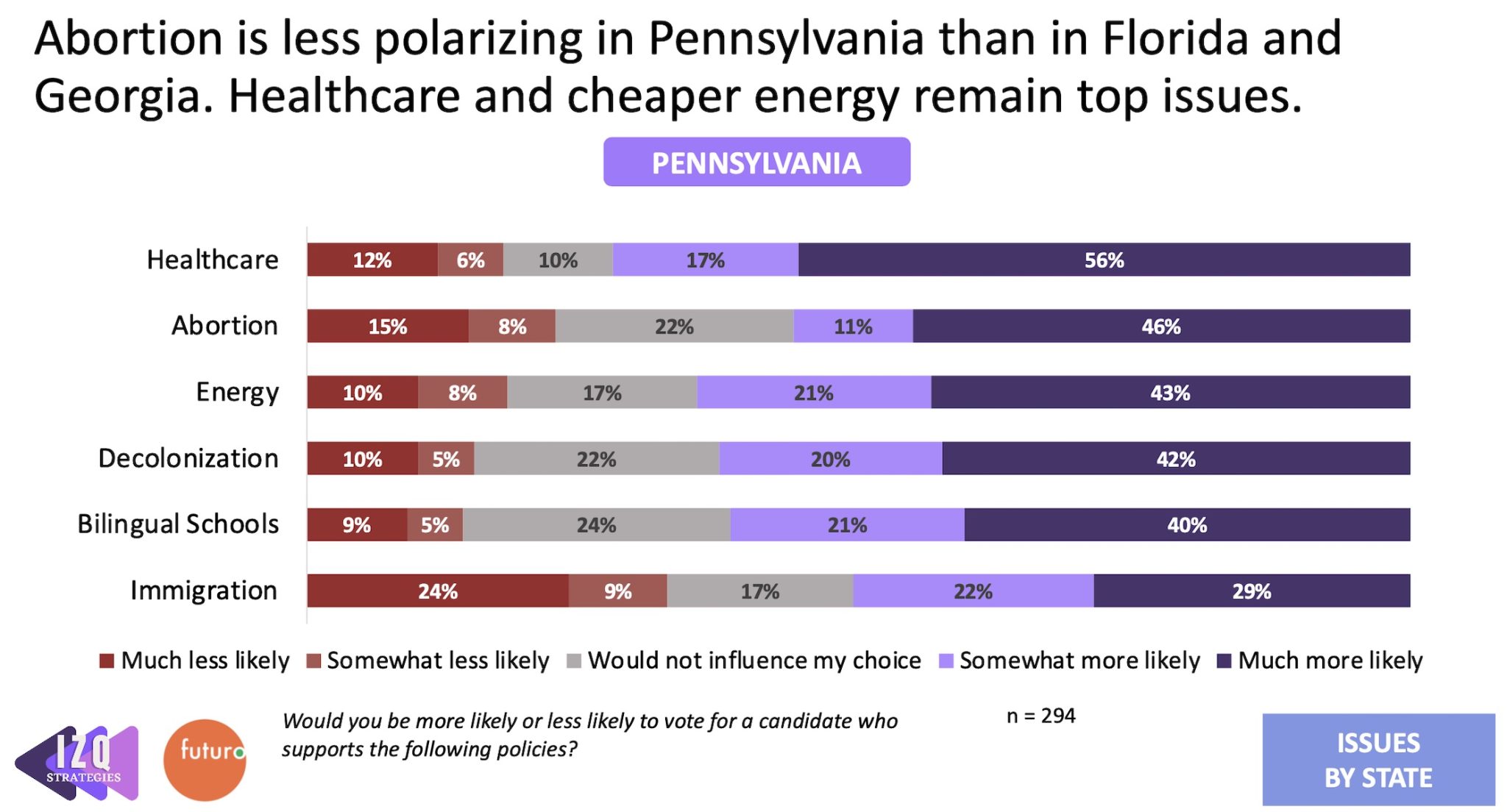 The full Pennsylvania crosstabs can be found here. In the coming days Latino Rebels will focus more on the state-specific results from the poll and share what some poll respondents had to say.

The poll was available in both Spanish and English. Responses were gathered via SMS and web panels. The data was weighted to be representative of Latino likely voters by age, gender, education, race, and voting history. A total of 1,089 individuals responded to the poll with the following breakdowns and margins of error listed by state:

“More data is always better, but our sample size is sufficient to get a good reading on where things stand. We’ve successfully conducted a poll of all Hispanic/Latino voters with a MOE of +/- 5 or 6 points, which is much better than a crosstab of say 100 Latinos in a normal poll. Our polls are definitely more accurate than any poll where Latinos are just a portion of the overall sample. Since our sample size was large for a poll of only Latinos, we were able to weigh on Latino subethnicity to make sure we got the best mix of Puerto Ricans, Cubans, Mexicans, etc., per state,” Sánchez explained.

The complete presentation of the poll’s findings is below.

Julio Ricardo Varela is the president of Futuro Media and founder of Latino Rebels. He also co-hosts the In The Thick political podcast and is an MSNBC Opinion Columnist. Twitter: @julito77