Massive Leak Sparks Debate About Role of Military in Mexico 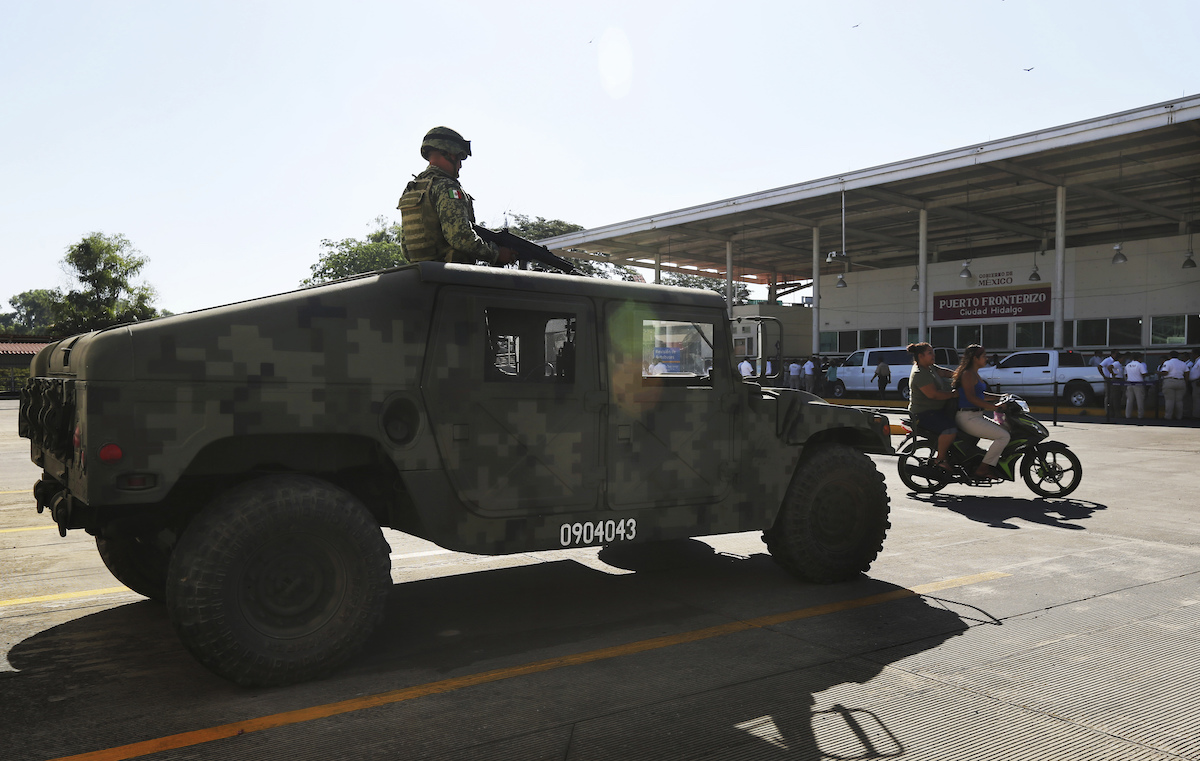 A Mexican army soldier watches National Guards hold a ceremony at a border crossing in Ciudad Hidalgo, Mexico, Friday, January 17, 2020, as they deploy along the southern border with Guatemala. (AP Photo/Marco Ugarte)

MADRID — Early this month, several media outlets published classified information leaked from servers of the Mexican Secretariat of National Defense (SEDENA, in Spanish), sparking a national debate in Mexico concerning the main function of the Army.

When a group of hacktivists called Guacamaya leaked key documents from one of the country’s most powerful institutions, it revealed worrying details of how the Army targets human rights activists and journalists or monitors their cell phones.

The leak came just after Congress’ approval of two key constitutional reforms: one that puts the recently formed National Guard, currently under the Secretariat of Security and Civilian Protection, under SEDENA; and another that prolongs its public-security deployment in the streets till 2028.

The approval sent a political shockwaves that divided the bloc —formed by the center-right Institutional Revolutionary Party (PRI), the right-wing National Action Party (PAN), and the center-left Party of the Democratic Revolution (PRD)— which oppose the ruling National Regeneration Movement (MORENA), founded by President Andrés Manuel López Obrador himself in 2011.

Pressure from the López Obrador administration forced many in the opposition to vote in favor of both initiatives, some even changing their allegiance to the president.

The leak was revealed just before the reforms were approved by the state legislatures—and with it, the biggest exposure of any government institution in Mexico’s history.

The documents bring to light relevant issues ranging from links to organized crime, espionage, the monitoring of journalists and human rights defenders by the Mexican Army, and the intelligence apparatus of the Secretariat of Defense, as well as rehashing old cases of former soldiers linked to drug trafficking, such as in the Ayotzinapa case, among hundreds of other scandals.

It wasn’t the first time that the Mexican government was accused of espionage. Five years ago, an investigation revealed that the government of then-President Enrique Peña Nieto (PRI, 2012-2018) had used software called Pegasus to hack into the cell phones of journalists and activists. The software had been sold by Israeli company NSO Group to a firm in Mexico that then sold the program to SEDENA in 2019, which continued to surveil the communications of two journalists and one activist.

“As documented by the organizations, both human rights and journalistic, that participated in the Army Spy investigation, in all the cases there is a very clear pattern: The people spied on were investigating the armed forces,” said Leopoldo Maldonado, Mexico and Central America director of Article 19, a free speech organization that has followed the espionage cases.

Journalist and author Ricardo Raphael was in the middle of a media tour in 2019 for his nonfiction book, Hijo de la Guerra —which tells about the cases of Mexican soldiers who defected to join drug cartels— when his cell phone was first attacked, as he recoounts in a Washington Post op-ed.

The other case involves a human rights activist in the state of Tamaulipas, Raymundo Ramos, who since 2010 has documented various extrajudicial executions and disappearances at the hands of the Mexican Navy and Army.

“They view with suspicion that there is public scrutiny of their work and functions on national security, and with even more suspicion when they are involved in serious human rights violations, about which it is clear to us that they want to be covered with a cloak of impunity,” said Maldonado.

The leaks have also revealed how the Mexican Army has followed and targeted social movements such as feminist groups and local NGOs such as Tlachinollan, both of which for years have documented cases of human rights violations committed by the authorities, some by the Army, since the ’70s and ’80s

“It is to look at public security with the idea not of protecting people, but of protecting the state, the government, and public officials,” said Miguel Garza, executive director of the Institute for Security and Democracy. “The people who make up the Mexican Army have that vision. That their task is not necessarily to protect the people, but rather to protect the regime from issues they call the enemy.”

The secretary of defense, Gen. Luis Cresencio Sandoval, was summoned by Congress to address the leak and the scandals it unleashed, but on October 16, he rejected the call. He proposed instead the traditional and opaque way of giving a report to the security commission in the Army’s offices.

“The secretary of defense not wanting to appear before Congress and the Senate is very serious,” said Garza. “It is a demonstration of the military power starting to surpass the civil power, and that they’re beginning to make some decisions because, first, they exert pressure.”

More Power to the Armed Forces

The writing has been on the wall since the Army took on the role of public safety during the administration of Felipe Calderón (PAN, 2006-2012). Nevertheless, it has been the government of López Obrador, known as “AMLO,” that has given more power to the armed forces than any president since the start of the 20th century.

As some of the leaked documents confirm, SEDENA has also taken on the role of developing massive infrastructure projects such as the Tren Maya in the Yucatán and the new Felipe Ángeles International Airport in the state of Mexico, 30 miles north of Mexico City. SEDENA controls the trade ports and customs, as well as various other civil government departments.

New details also emerged of a plan to create a corporation run by the armed forces that would own an airline and manage the capital’s two airports. AMLO argues that the armed forces function as a firewall to the usual corruption of the institutions.

His national security strategy relies on the same rationale. “The president says that [such actions] must be taken because there is no stable local or state police force and because eight out of 10 Mexicans trust the Army, the Navy, and the National Guard,” Garza explained.

The president’s response to the leak and to the accusations of espionage have been the same as to other scandals during his administration: dismiss and accuse the accuser. In the case of the leaks, he has said that the information revealed was already “public domain,” adding that the leakers “would like us to help them make a big deal about the issue, which was a resounding failure.”

About the espionage, he accused the media outlets that published the news, such as Animal Político, of being against his government, and he denied that there was any wrongdoing. “They are intelligence tasks,” he said he said of the various operations detailed

“Unfortunately, given the historical lack of accountability of the Army for serious human rights violations, and due to the open and flagrant protection that the president is giving in this situation, it will have to resort to international institutions again such as the Inter-American Court,” said Maldonado.

He points out that it is necessary to have a wider “discussion in favor of whistleblowers in Mexico so that there is a regulation that protects them.”

On October 24, the secretary of interior, Adan Augusto López, insisted that there would be no problem if a military member decided to run for office, “even being president of the Republic.” That same week he pushed state governors from his party to accelerate the Constitutional reforms, and a judge had just blocked the transfer of the National Guard to the Secretariat of Defense.

Garza says that Mexico needs an urgent process of political and institutional demilitarization, something like those begun in other Latin American countries such as Colombia and Chile.

“I believe that is something that could happen in the near future, with a next president, even if they are from the same party. I think that they can make a shift. I hope so, he said. “What is sad is that it will take 10 or 15 years to demilitarize this country.”

Diego Estebanez García is a Mexican journalist currently based in Madrid. His work has appeared in El País and El Periódico.